What is the Zerotech Dobby?

Advertised as a “selfie drone”, the Zerotech Dobby is a small quadcopter that comes equipped with a 13-megapixel camera for snaps and 1080p video recording at 30fps.

Small enough to fit in a (generously sized) pocket, the Dobby is controlled via a smartphone app, allowing it to perform a wide range of tricks in the air. The drone is powered by a Qualcomm Snapdragon processor, while juice is provided by a rechargeable 970mAh battery.

It costs around £300 from online retailers such as GearBest. 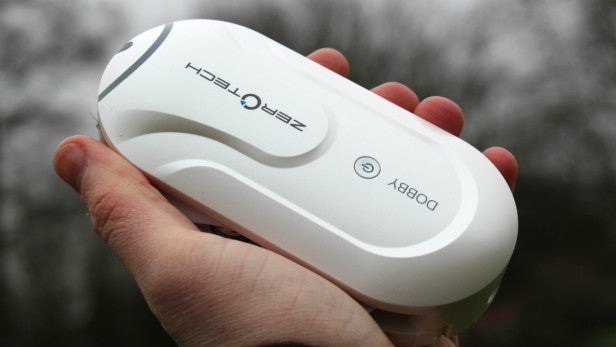 Zerotech has made quite a big deal of the Dobby’s diminutive size, and with good reason – this drone is tiny when you consider how feature-rich it is.

In terms of footprint it’s smaller than most mobile phones, but it’s quite thick so you may have to think twice before stowing it in the pocket of your skin-tight jeans – combat trousers might be more appropriate.

Four arms fold out and click into place and on the end of each you’ll find plastic rotors. There’s definitely an art to opening and closing these arms, but with my time with the device it never once felt like I could damage the blades.

The unit itself is constructed from a pearl-coloured white plastic and weighs in at just under 200g with the battery attached. The power button sits on the top, while the bottom is home to the battery compartment.

The battery can be unclipped and placed in the bundled charger for top up, and filling up takes around an hour. A button on the battery can be pressed to indicate how much juice is left; it’s denoted by a bank of four green LEDs.

Also on the bottom of the unit you’ll find an optical sensor and ultrasonic wave sensor, both of which help the drone stabilize itself when used indoors. On the back of the Dobby you’ll find an LED, and around the whole unit you’ll notice a selection of air vents – these allow the internal fan to keep the Dobby cool when it’s in use.

On the front edge of the device there’s a 13-megapixel camera, which can be manually angled to one of six different settings to get the right shot. By default, it faces straightforward, but when the Dobby is in the air you may want it angled downwards to capture you on the ground. 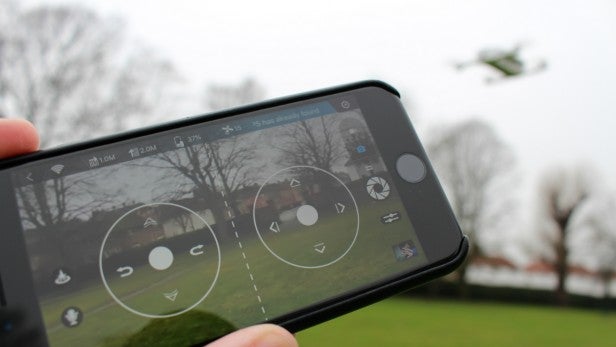 Given the Dobby’s remit as a “selfie” drone, it should be no surprise that much of its functionality revolves around photography. The 13-megapixel f/2.2 CMOS lens can capture shots up to 4,208 x 3,120 pixels in resolution, producing images of a generally decent standard.

Unlike other drones on the market, the Dobby doesn’t come with its own remote control; you’ll need Zerotech’s Do.Fun smartphone application, which is available for both Android and iOS.

The app uses Wi-Fi to link itself to the drone, with both 2.4GHz and 5GHz standards being supported. Single, burst and even time-delayed shots are possible, and once a photo is taken it’s stored in the Dobby’s 16GB of internal memory before being downloaded to your handset via the Wi-Fi connection.

Video capture is perhaps a more impressive application for the Dobby drone. 1080p video running at 30fps is possible, and Electronic Image Stabilization helps compensate for the rather jerky movement – something that’s exacerbated when you’re piloting the Dobby in a windy location.

Naturally, manual control is a little jumpy, but there are several automatic flight programs that you can use to get a smoother shot. One places the drone in an orbit around a specific location; another can track you as you move around.

Face tracking is also supported, but is best reserved for close-quarters filming. You can also make use of some dramatic tracking shots that cause the Dobby to pan elegantly backwards, recording as it drifts away before returning to its previous location.

During flight, you’re presented with a low-res preview of what the Dobby is seeing in real time, and using the on-screen commands you can control elevation, rotation and movement.

The unit uses GPS to track its whereabouts in relation to you and your handset, which means that both ground and palm landings are possible. The latter might sound quite intimidating but the Dobby’s optical and sonic sensors mean that its rotors are cut off the moment it detects your hand. It’s also possible to launch the drone from your palm, which is quite cool – if a little scary at first. 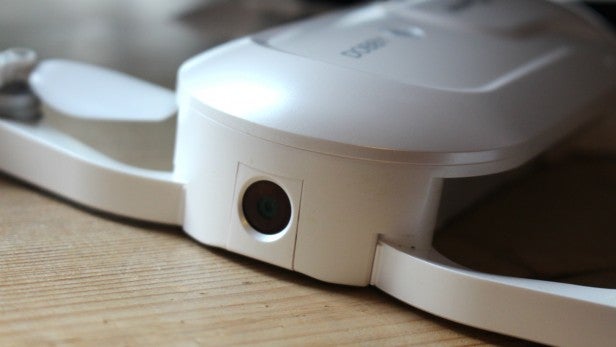 Given that it’s a consumer-level drone, the Dobby’s performance is impressive. It’s capable of flying to a height of around 300 meters above sea level and maintaining its position with a remarkable degree of accuracy, even when it’s being buffeted by relatively strong wind.

The on-board Qualcomm Snapdragon processor – combined with Zerotech’s library of algorithms honed over a decade of development – ensure that the Dobby is a stable flyer. On the downside, it’s rather noisy, so don’t expect to use it in public places without being noticed.

When it’s outside, the Dobby uses GPS to track its position, but indoors this isn’t possible so it relies on optical and sonic sensors, which are located on the bottom of the unit. These will keep the drone stable up to a height of around 3 meters; it’s quite impressive how precise the unit is when used in this environment.

However, the lack of side-mounted proximity sensors mean that the Dobby can’t avoid obstacles such as furniture, light fittings or people, so it should be used with caution indoors. Optional rotor guards might be a wise investment, since these will prevent the drone’s blades from becoming damaged – or it damaging something else.

Once you get Dobby up in the air and become accustomed to its controls, it’s possible to take some amazing shots – shots that simply wouldn’t be possible without a drone.

You can see a selection of photos taken on the Dobby Drone below. 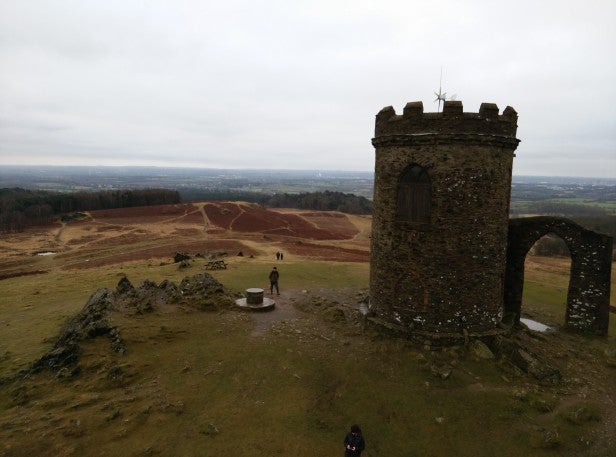 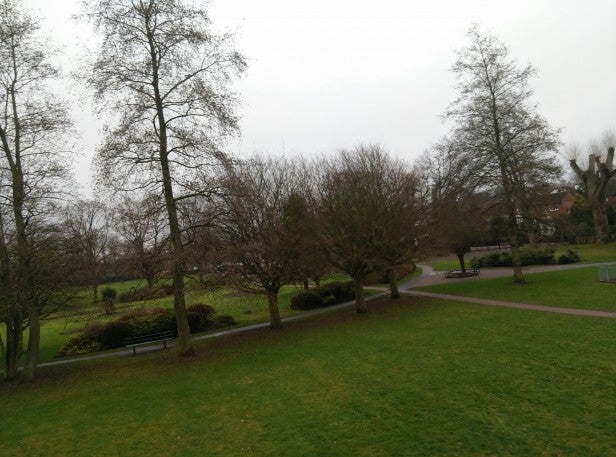 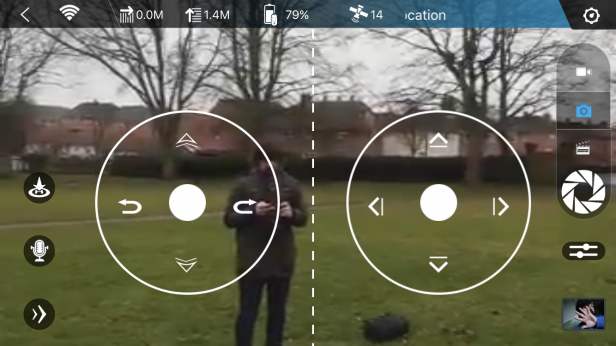 While the camera quality might not match that of your smartphone, the fact that you’re able to snap locations from such an elevated point more than makes up for it.

Video recording, too, is excellent – although you’ll almost certainly want to turn on the EIS feature if you’re looking to control the drone manually. This reduces judder on the final video, but be aware that it can result in black areas around the edges of the final video as the EIS “locks” the image to stabilize it.

By far the biggest limitation with Dobby is its stamina. Zerotech quotes around nine minutes of flight time per charge, and as you’d expect, this is being quite generous. If it’s a windy day and the Dobby is having to compensate to maintain its position, you’ll notice that the battery drains much quicker. In addition, activities such as recording HD video and taking photos will naturally consume more power.

The bundled charging dock does top up the 970mAh battery swiftly, but it goes without saying that if you’re serious about making the most of this drone, a spare battery is a must. It might also be a good idea to invest in a large-capacity USB power bank so you can charge Dobby’s expended batteries when you’re out of the house. 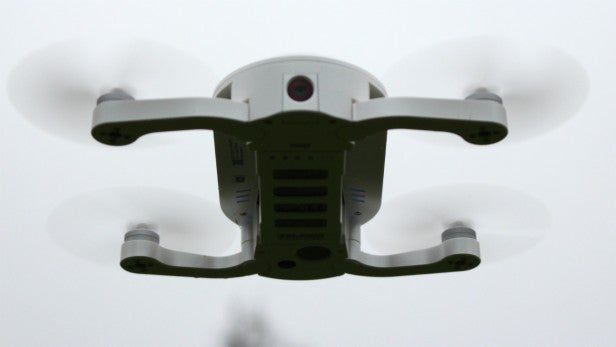 Should I buy the Zerotech Dobby?

If you’re looking for a mini drone that can take decent photos, the Dobby Drone is a solid choice. The Dobby Drone is a great at everything from impressive aerial shots to hands-free selfies and video. For such a small device, it offers impressive performance and stability when in the air. The big downsides are battery life and cost – at almost £300, this certainly isn’t an impulse purchase and there are cheaper mini-drones available for those that just want a flying toy.

Great for selfies, but the Dobby Drone’s poor battery life is an issue.

Thanks to GearBest for supplying the Dobby Drone used in this review.