Though not as glamorous as the ultra-portables, 15.4in notebooks remain a staple of the notebook market due to their versatility and affordability. Perfect as housebound mobile computers, they’re popular among manufacturers for being comparatively cheap to make and there’s no shortage of budget options available, as our Student Guide to Technology feature demonstrated. However, not all 15.4in notebooks need be cheap and cheerful, some can be powerful and versatile like the Acer Aspire 5920, while the likes of HP, Dell, Sony and et al all produce models aimed at the home user who wants to do a bit of everything. 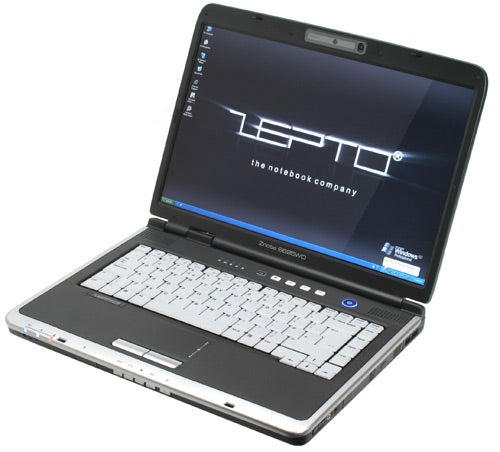 One such manufacturer is Zepto, who we’ve previously featured with the Znote 6224W. Based in mainland Europe, Zepto is well regarded for producing high performance notebooks at reasonable prices, with plenty of configuration options to boot. This has made them popular with enthusiasts who like to customise every aspect of their notebook but don’t want to buy a Dell, or any of the OEM chassis sold by the likes of Evesham and Rock. 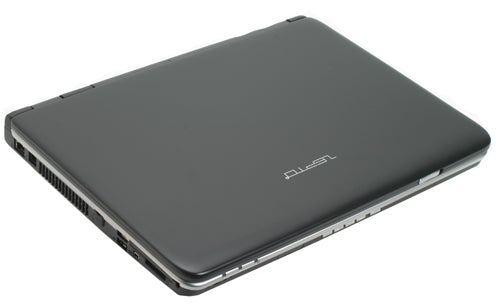 Our sample came loaded with an Intel Core 2 Duo T7700 running at 2.4GHz, with an 800MHz Front Side Bus and 4MB of L2 Cache. This is one of the faster mobile Core 2 Duos available and the fastest Zepto offers, ensuring snappy application performance. It’s supported by 2GB of 667MHz DDR2 configured as two 1GB sticks, with options for 800MHz DDR2 and quantities up to 4GB as well. As with the 6224W, a 512MB 8600M GT is the standard graphics solution on all configurations.


Storage options are numerous and though our system came with only a 120GB SATA hard drive it was a 7200rpm unit, which should help boost application performance even further. Indeed, 7200rpm drives are the only options up to 200GB, after which there are options for 5400rpm 250GB and 320GB drives, as well as a 32GB SSD. For an optical drive you get the usual 8x DVD+/-RW drive, however there’s an option for an HD DVD drive should you desire it. 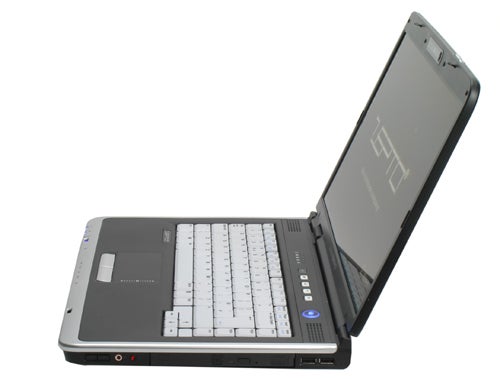 Network connectivity is also very thorough, with Gigabit Ethernet, Draft-N Wi-Fi and Bluetooth 2.0 all coming as standard. There’s also an infrared port on the front of the notebook, while the rest of the connectivity is all fairly standard fare with four USB ports, four-pin FireWire, a 54mm ExpressCard slot, VGA and S-Video TV-out on hand. This is all fine and dandy, but in these times the addition of HDMI would be quite welcome. A 3-in-1 card reader is also a little low on the format support, though a 1.3 Mega pixel camera does soften the blow.

Of all its features though, it’s the screen that’s probably the most noteworthy thanks to a 1,680 x 1,050 native resolution display that’s sharp and great to look at. A high contrast finish helps produce decent black levels and clean and vibrant colours, while the 300cd/m2 brightness is also very impressive. Naturally, the extra vertical and horizontal pixels also provide a decent level of desktop real-estate, leaving plenty of space for running multiple applications and the sidebar applications. A response time of 6ms grey-to-grey should also ensure moderate gaming and video performance, though as with all LCDs some ghosting and smearing is unavoidable.

Unfortunately what you gain in performance and some good features, you lose in design and aesthetic appeal because the 6625WD is a noticeably dated looking machine. Lid closed things aren’t so bad; in fact the smooth and curved lid is actually quite attractive. However, opening up the notebook reveals a rather less attractive situation. Dull black plastic, dull silver highlights and slightly jarring silver come light-grey keys combine to no great effect, producing a notebook that isn’t quite ugly, just entirely mediocre.


It is this that clearly divides Zepto from the larger manufacturers. It can match them on price and features and surpass them in terms of customisation, but for design appeal you’re looking in the wrong place. Multimedia is clearly not a strong point either, with fairly average speakers and the lack HDMI proving quite limiting. Fortunately, there are some plus points. 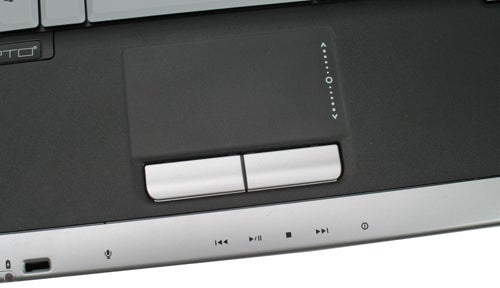 As a chassis, it’s not quite as bulky and heavy as some. With a six-cell 5600mAH battery it weighs just a shade over 2.9kg, while it’s relatively slim with dimensions of 355 x 262 x 27mm (WxDxH). There are also plenty of useful shortcut buttons, with media keys on the front edge and an assortment of other shortcuts above the keyboard. There’s also a volume rocker on the right edge, accompanied by headphone and microphone jacks.


Another nice feature is the touch pad, which is integrated into the surface of the notebook in a similar manner to that on the HP Pavilion HDX. It’s also very pleasant to use, while the buttons feel responsive, though the touch pad itself is probably a centimetre or so too wide, with it occasionally obstructing typing.

Speaking of typing, the keyboard is a bit of Jekyll & Hyde affair. On the one hand it’s very well arranged, with a proper sized Return key, nicely offset cursor keys and Page Up/Down keys that are set vertically along the right hand side of the keyboard. Zepto has even managed to put the Ctrl key in the correct position to the left of the Fn key: hooray!


However, this generally excellent layout is let down significantly by the keys themselves. As with the design they aren’t downright awful, just not as good as they could or should be. They don’t spring back as quickly or cleanly as we’d like and generally feel slightly shallow and unresponsive.

There’s nothing unresponsive about the performance though, as you might have guessed given the specification. For testing we ran our usual set of benchmarks, which include PCMark 05 and our in-house Photoshop Elements and Virtual Dub rendering tests and the 6625WD sailed through at impressive speed.


In PCMark 05 results were comparable to those of the Rock X770-T7700, which had a similar specification albeit with a faster 8700M GT and which has been superseded by the T7800-8800 that we reviewed recently. Much the same can be said of the Qomsio G40-10E, which managed slightly higher scores in the HDD tests, but was slower in the CPU test due to its lower spec 2.0GHz CPU. Moving to our in-house tests, the Zepto trailed the Rock X770-T7700 by around 60 seconds in both tests but was, as expected faster than the Qosmio and despite it trailing the Rock this is still an impressively fast notebook. 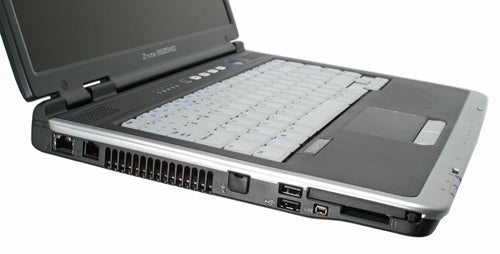 In gaming, however, results were solid but not outstanding. In both Counter-Strike: Source and Prey the Zepto comfortably managed playable frame rates at 1,680 x 1,050 with no anti-aliasing or filtering, but when these features were turned on, performance was obviously affected and though both games would be playable, slow down would be noticeable too. Switching down to 1,280 x 800 obviously helped matters and should ensure smoother if not super fast frame rates, but ultimately games will look a good deal better at the native resolution. As a gaming machine then, the Zepto isn’t perfect, but as long as you’re willing to turn down some effects and texture quality it will deliver playable frame rates. It should go without saying that Crysis is a no go.


Less appealing though is the battery life. In Mobile Mark 2007’s Productivity test it managed a disappointing 108 minutes, which translates to less than two hours of moderate use. This was borne out by a simple idle test, which also fell short of the two hour mark. Given these results it would be wise to spec a 12-cell battery, which is an option, if battery life is important to you.

Overall one comes away with mixed feelings about the Znote 6625WD. Its excellent screen and decent specification are attractive, but these good elements are let down by a dated chassis and poor battery life. These concerns are, however, tempered by the current pricing. You can currently get hold of this specification for as little as £895.40, due to a generous price offer of £190 inc. VAT off the ‘Power’ default specification. Obviously, at this price it’s something of a steal and even without this offer a price of £1,095.40 inc. VAT isn’t too shabby either.


Thus, it comes down to priorities. If you’re more interested in performance, features and customisation and couldn’t give two hoots about looks, then the Znote 6625WD is definitely worth considering. It has all the ingredients, bar battery life, for an excellent household notebook, but in these “image” dominated days its dated looks will deter others from taking the plunge. 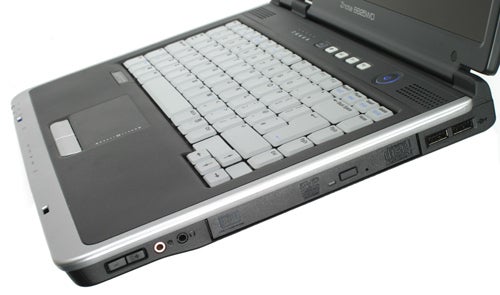 
A solid if rather dull looking notebook, the Zepto Znote 6625WD makes up for its mundane looks thanks to high-end components and mostly excellent performance at a price that won’t break the bank.