Regular readers may remember Zepto. Just over a year ago we reviewed the Znote 6214W, and it walked away with the coveted Recommended Award thanks to its combination of fast components at a superb price. One of its benefits was that it provided a modicum of gaming performance inside a moderately portable 14.1 chassis, and the Znote 6224W we’re looking at today is more or less a complete update of that model.


I say complete update; it’s more of a refresh than anything else, with the internals upgraded to the latest mobile technology while the chassis receives little more than the smallest of tweaks. On the outside this is no bad thing. Fine, it isn’t eye-catching like the Sony VAIO CR, but the matte black combined with the pleasing curves on the lid create a sleek, almost low profile look that’s quite pleasing to behold. Zepto’s classy logo lettering certainly helps too, and is certainly an improvement over the garish bold lettering found on Toshiba notebooks or massive badges on Dell machines. 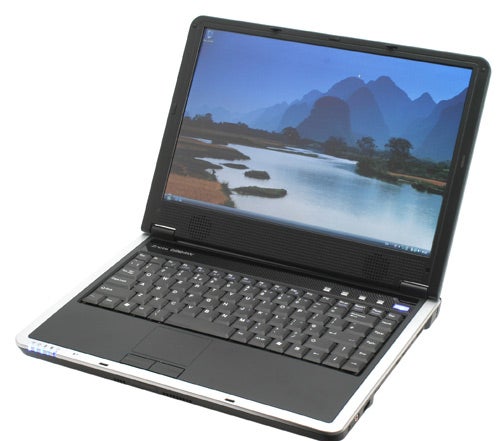 Another particular bonus is the size. Fine, a 14.1in notebook isn’t ultra-portable or anything, but weighing 2.4kg and measuring 341mm wide, 247mm deep and only 27mm high it’s perfectly portable, and once you read what’s inside the relative size and weight is all the more impressive.


Unfortunately, though the outside is perfectly palatable, opening up the lid reveals a rather less attractive state of affairs. First to draw ire is the speakers, which are situated in a gap just below the screen. This is actually quite neat since the speakers are projecting toward you rather than into the desk or upward into nothingness, but the plastic moulded grill that accompanies them is nothing but an eye sore and really upsets one’s overall impression of the machine.


Similarly the silver accenting, one of the few visual changes, isn’t an especially good one. It just looks rather cheap, as does the glossy black panel just above the keyboard and the buttons that are set into it. Overall there’s a definite lack of finesse in the some of the design, though it is at least solidly put together and inspires some confidence in this respect. 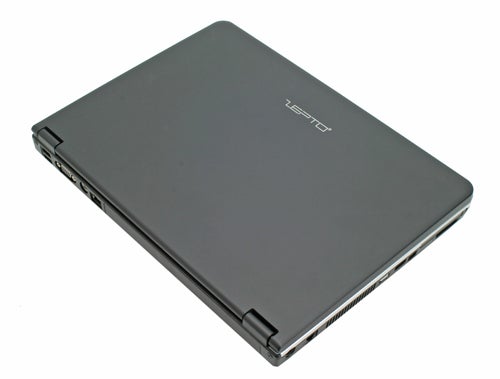 At the core of our sample was an Intel Core 2 Duo T7300, which runs at a breezy 2GHz with 4MB L2 Cache on a 800MHz front-side bus. This is backed up by a single stick of 2GB 667MHz DRR2 RAM, and most impressively a 512MB nVidia GeForce 8600M GT. This is a very powerful set up, especially for a notebook of this size, and should allow for a good deal of gaming performance.


Slightly disappointingly our sample came with an 80GB SATA HDD, though it was a 7200rpm Hitachi drive so it was at least nippy. Thankfully, you can specify a 160GB 5400rpm drive for as little as £13.18 more, with options going all the way up to 250GB for 5400rpm drives and 200GB for the 7200rpm versions. This is a very comprehensive selection, and even compared to other built-to-order companies Zepto provides a massive range of options – more on which shortly.

Other features of the 6224W include a Super Multi DVD-Rewriter drive, while there’s also Draft N Wi-Fi, Gigabit Ethernet and Bluetooth 2.0 EDR. Audio is provided by a 7.1 Realtek ALC268 HD Audio chip, and Zepto has been wise enough to include a combined Headphone and S/PDIF output for optical audio output.


Putting aside the small hard drive it’s an extraordinarily well specified notebook, and with an asking price of £945.35 inc. VAT and shipping it’s nothing but superb value. Throw in a larger HDD for a small pittance and it’s still superb value, and there are dozens of options for customisation. 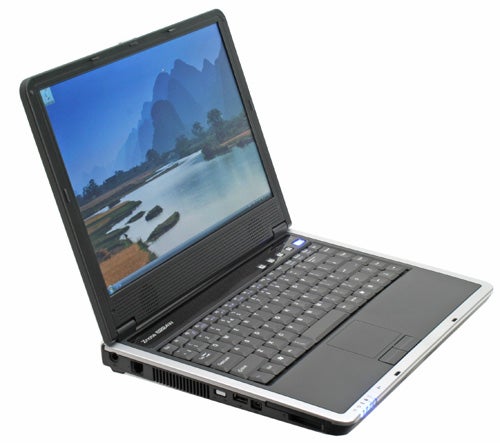 Take memory for example. Our sample came with a single stick of 2GB 667MHz DDR2, but there are plenty of other options available to you. You can specify the same amount and speed in a dual-channel arrangement, but you can also request 2x 1,024MB 800MHz DRR2 for £21.32 more, and even 4 GB 667MHz DDR2 for £71.90. Hard disk options I’ve already outlined but there’s also an option for 1GB of Intel Turbo Memory, while you can select any variety of Windows including XP Pro and Home, and 64-bit versions of Vista.


One thing you can’t change, however, is the display. Measuring 14.1in diagonally it sports a 1,440 x 900 native resolution, which is fairly generous compared to some. Zepto even go as far as to quote its specifications, which include a 550:1 contrast ratio, a 6ms response time and a 300cd/m2 brightness rating. 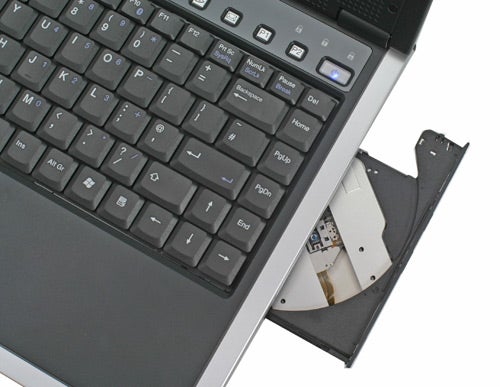 It’s certainly a bright display and it deals with motion well enough, but beyond this it’s no better than mediocre. It has a distinctly mottled look, with an average black level and colour gamut that produces muted and dull colours. Overall it’s passable for everyday use and gaming too, but for any kind of video it’s severely disappointing. It’s a perfect example of what you’re sacrificing for that price and those components, and as ever it’s a case of balancing your needs against the compromises that have been made.


Similarly disappointing is the keyboard. Some of our regular annoyances crop up such as Fn key being to the left of the Ctrl key, while the Return key is also on the small size. Keys also have a fairly deep travel too them, but don’t have the snappy response to match. Again, it’s another sign of the economies made to get that price so low.

Connectivity is all fairly standard, there are no niceties such as an HDMI output, but otherwise very little is left to chance and the 6224W won’t leave you wanting.

Starting on the left edge you’ll find DC-in and modem ports, with these followed by the primary air outlet. When playing games the Zepto will get fairly warm and moderately noisy too, and though it’s by no means the quietest during normal use it is, nonetheless, perfectly acceptable. Also on the left is the first of four USB ports, and this is joined by a 4-pin FireWire port, a 54mm ExpressCard slot and beneath that a 3-in-1 card reader.


There are no connections on the front of the notebook, however on the right there’s a combined Headphone and S/PDIF output as well as Microphone input. To the right of these is another of the USB ports, with the rest of space taken up the optical drive and the Kensington lock slot just to right of it.

On the back there are a further two USB ports, which are mounted horizontally above and below each other. This makes them ideal for use with a USB mouse and keyboard, with the other two USB ports free for any kind of USB based storage devices or whatever else you might have in mind. Things are rounded off by D-Sub and S-Video output, with the LAN port on the back too. This arrangement is actually rather smart, and means that when used as a desktop you won’t have to deal with a spaghetti junction of wires sprouting from the sides.


Another quite pleasing aspect of Zepto’s machine is the complete lack of any kind of bloatware. Anyone who has bought a notebook or PC from any number of the larger manufacturers will be able to relate to the annoyances created from bloatware. Not content with simply bundling in anti-virus, manufacturers have taken to introducing any number of useless programs, many of which simply duplicate Windows’ own functionality in more flashy and less intuitive ways.

Zepto doesn’t even go so far as to include Anti-Virus, which means your machine is nice and clean and ready to be used as you wish. It does mean, however, that you’ll want to make use of free anti-virus programs such as AVG or Avast, which do a great job without all that program bloat or the cost of maintaining an up-to-date virus database.

This certainly goes someway to ensuring that the Zepto is quick and snappy in general operation, though the powerful specification is obviously the main factor. All this said, the PC Mark 05 tests showed the Zepto to trail somewhat behind similarly specified systems, with the exception of the Graphics test where the 512MB dedicated video memory gave it a slight edge over the likes of the Acer Aspire 5920. 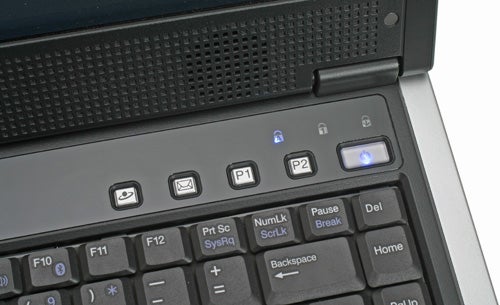 Some subjective testing went to prove that the 6224W was a perfectly capable gaming notebook, with the machine more than capable of running more recent DX9 games at the 1,440 x 900 native resolution at highest detail and with some anti-aliasing and filtering. Titles such as Counter Strike, Prey and Quake 4 run very smoothly at such settings, and chances are the system will be able to deal with most games given a little bit of tweaking to the settings.


Obviously, the 8600M GT is also capable of running DX10 titles, however we’ve yet to see a DX10 title that runs smoothly on mid-range parts and though EA seems keen to promote the idea that its DX10 poster child, Crysis, will run well on mid-range cards, there’s no way to independently substantiate such claims, at least until the demo appears on September 25.


Somewhat unsurprisingly, the one area that does let the Zepto down somewhat is battery life. Sporting a standard 6-cell battery obviously keeps the weight down, but with such a power hungry GPU the Zepto struggles to garner an acceptable battery life even under near idle conditions. In a simple subjective test the 6224W managed a mediocre one hour and 40 minutes, which was achieved when using the notebook for basic word processing and web browsing under Windows’ Balanced profile, with screen brightness set to maximum and Wi-Fi enabled.

It goes without saying that this is a very disappointing effort, and does rather limit the machines appeal. Portable gaming it may provide, but what about those times when you’re out and about and don’t want to game? If any system needed an Asus U3 style switch for discrete and integrated graphics then this Zepto would be it.


If gaming on the move is your primary concern then Zepto has the notebook for you. The Znote 6224W is a powerful and well specified notebook, which will be able to deal with most games so long as you make some compromises. It’s light too, which is unusual for a ‘gaming’ notebook, though a poor screen and woeful battery life are issues that must be lived with and limit its appeal only to those who specifically want or need something that can run games competently.