Having already taken a look Inside Mobile Penryn it’s now time to take a closer look at the Penryn system used for our testing, the Zepto Znote 3415W. Always one to launch with the latest components as quickly as possible, Zepto has been offering Penryn CPUs in its notebook line-up for a while now, all at typically competitive prices and with plenty of configurability on offer too. So, how does this system compare to other 15.4 inch offerings? 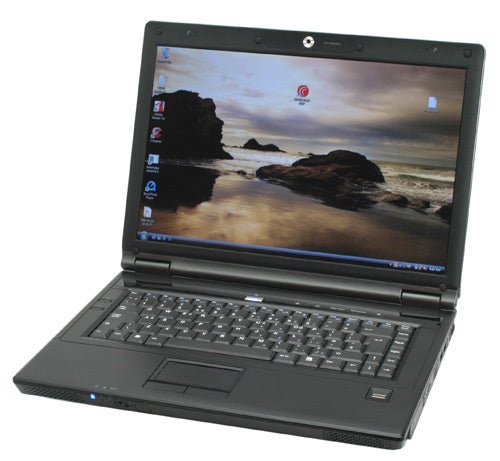 As is typical of Zepto, the Znote 3415W is best described as functional. On the outside there’s a simple two-tone black and dark grey gloss finish, while the rest of the system is wrapped largely in non-descript matt black plastic. Weighing 2.8kg it is relatively light for its size and the actual dimensions, 355 x 257 x 35.2mm (WxDxH), make for quite a pleasant form factor that’s free of unnecessary bulk and feels a little slimmer and more svelte than you might imagine. Nonetheless, this is no style icon and though it’s well put together, if you’re after something with a little more character you’re better off looking elsewhere.


However, what it lacks in superficial looks, it makes up for in inner beauty. As previously discussed it utilises a 45nm Penryn CPU, a T9300 that runs at 2.5GHz with an 800MHz Front Side Bus and 6MB L2 Cache. This is supported by 2GBs worth of 677MHz DDR2 RAM, with a fast 7,200rpm 160GB SATA HDD providing the storage. All combined it makes the Znote 3415W a very quick notebook, among the quickest we’ve tested. 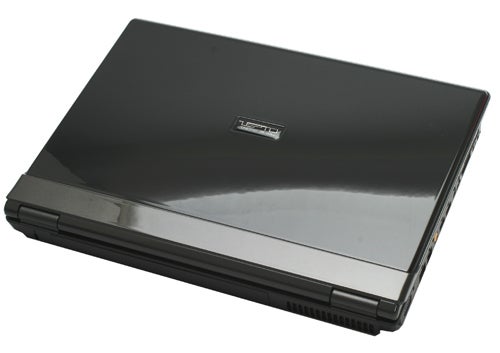 Along with these base components you get a 512MB nVidia 8600M GT, while the 15.4in display has a fairly standard 1,280 x 800 native resolution and a glossy “high contrast” finish. Network connectivity is strong too, with Gigabit Ethernet as standard and Intel 4965 AGN wireless, though for a little less you could opt for Zepto’s own Wireless-N adapter instead. Elsewhere on the system you’ll find a 2.0-megapixel camera set into the bezel of the display, as well as a fingerprint reader below the cursor keys.


Amazingly, though, this isn’t even the best configuration Zepto offers at this point in time. Since we got this system in for review Zepto has revised its pricing, so now you could get a similar system with a 200GB 7,200rpm SATA HDD and 4GB 677MHz DDR2 RAM for around £850 inc. VAT, which with Vista Home Premium 64-bit included is an absolute steal. This underlines one of the continuing strengths of Zepto machines, which offer great performance and flexibility for those who want to specify every aspect of their notebook.

So far, then, we’ve established that this is a fast and competitively priced system, which suffers aesthetically but is nonetheless functional and well built. Its basic specification means it’ll breeze through any applications you throw at it, within reason, while the 512MB 8600M GT will provide you with a modicum of gaming performance, particularly at the 1,280 x 800 native resolution.

As for the display itself it’s a solid but unspectacular affair. Viewing angles are pretty mediocre, but colours are warm, text is sharp and whites are relatively clean. Black levels are, however, not a strong point and though they’re by no means awful, there’s an overarching greyness where very dark images are concerned. Overall, though, it’ll do for most even if it isn’t the best screen we’ve seen of late.


Another slightly disappointing aspect is the keyboard. Never a strong point of the Zepto machines we’ve seen of late, the layout is actually okay – there’s a full-size Return key and the only real flaw is the Fn key placed to the left of the Ctrl key. However, the keys themselves just feel leaden, making it difficult to comfortably develop a fast typing speed. Doubtless it’s something you’ll get used to with prolonged use, but as far as laptop keyboards go you can do a good deal better.

Likewise, with connectivity the Zepto covers most bases but lacks in some departments where competing machines excel. On the plus side you get four USB ports, while a 54mm ExpressCard slot and a 3-in-1 memory card reader supporting SD, MMC and Memory Stick formats add some flexibility. But it lacks any digital audio or video outputs, with D-SUB and S-Video for video and lone headphone and microphone jacks for audio. Connectivity is rounded off by basics like a FireWire, Modem and Ethernet ports along with a lock slot, but the lack of useful extras like HDMI is a slight disappointment.


And, while we’re on a role of pointing out the various niggling faults, the integrated speakers are average at best. Set into the front edge they provide little in the way of warmth and don’t manage great volumes either, so a pair of decent desktop speakers or headphones might be in order – see the Creative Gigaworks T20, T40 or HD50 speakers for options. 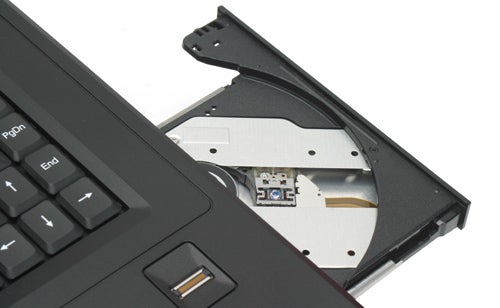 Yet, despite these grumbles there are still some elements worthy of cheer. Along the top of the keyboard are touch sensitive shortcut buttons, with shortcuts for your web browser, email client and a mute button as well. More interesting, however, are the Q Power and USB Power buttons that sit to the left of the keyboard. Q Power is a rapid charge mode that when activated charges the battery to 70 per cent in one hour, while the USB Power button enables you to charge any item via USB even when the system is powered down. This is an indecently useful feature and one we’d love to see on more notebooks.

For all its faults, though, one thing that can’t be doubted about the Znote 3415W is its raw speed. As was already outlined in our Inside Mobile Penryn feature it compares very favourably to even the fastest notebooks we’ve tested over the last six months, while it also eclipses them in several scenarios. 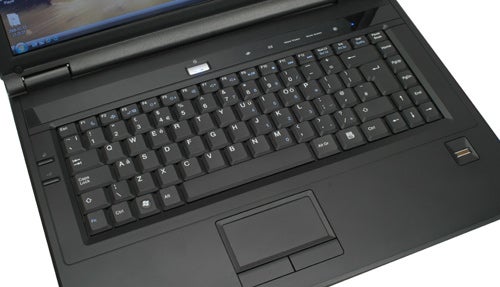 One such scenario is batch image editing, as demonstrated by our in-house Photoshop Elements test that simulates processing and resizing a large number of images. Here the extra L2 Cache of the T9300 really comes into play, with the Zepto even beating the likes of the Rock X770 T7800-8800 – probably the fastest notebook we’ve ever tested.


In all our other tests the Zepto also performed very well. In PCMark Vantage it competes well with the slightly higher specified Rock, even coming out on top in some of the more CPU intensive tasks. Moreover, the Zepto runs noticeably cooler than some notebooks we’ve used in the past; another benefit of utilising the 45nm T9300 instead of any of its 65nm predecessors.

Regrettably, though raw performance is very strong, Zepto once again fails to impress when it comes to battery life. Utilising a 4800mAh six-cell battery the Znote 3415W doesn’t compare well to previous systems we’ve reviewed, despite the fact that the new CPU should offer some benefits when it comes to power usage.


As such, when compared to the Dell XPS M1530, another 15.4in notebook that used a six-cell battery and broadly similar components, with the exception of the CPU, the Zepto trails considerably. In all tests and conspicuously so in the Productivity benchmark, it managed just over two and a half hours, compared to the Dell’s two hours and 55 minutes. Purchasing a larger nine-cell battery would obviously offset this gap, but it will of course add extra weight and expense. 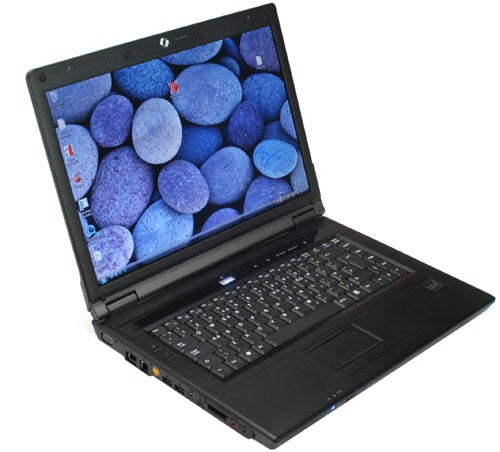 Bearing in mind this and the other smaller issues already discussed it is clear the Znote 3415W isn’t the perfect laptop, not by a long chalk. But what it does do well is address a particular need for a bleeding edge machine at a price and flexibility few can match. Fine, it may not have the look or feel of a Dell, HP or Sony machine, but it doesn’t have the price either. And when it comes to the flexibility of available options, Zepto even trumps Dell.


What it lacks in style and panache the Zepto Znote 3415W makes up for in raw performance and value, with few able to match Zepto both on price or options available. Its rough edges mean it’s not a bona fide recommendation, but if it matches your needs it’s worth a look. 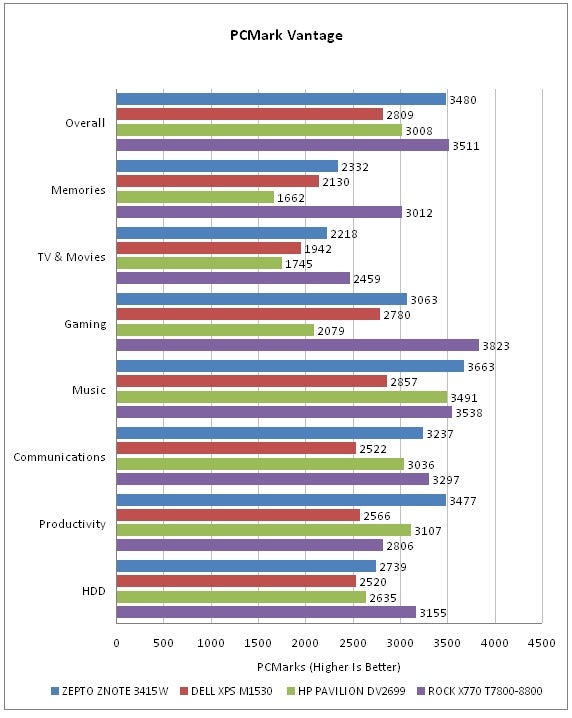 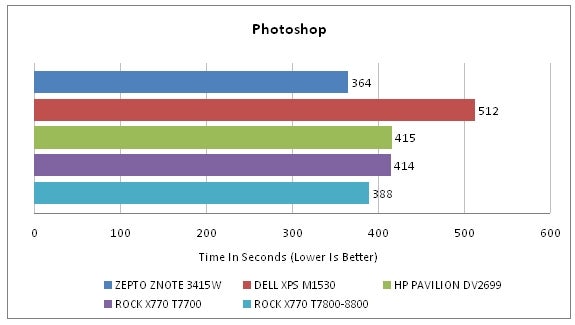 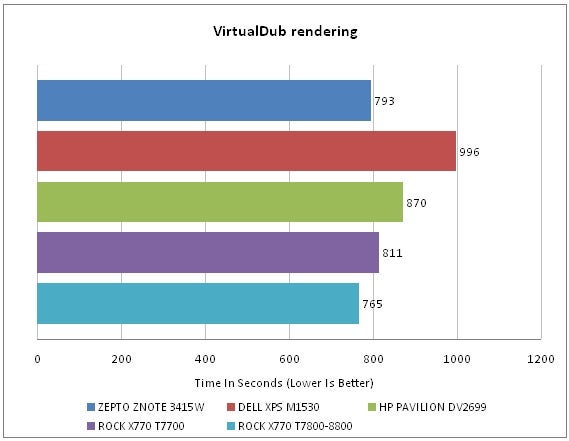 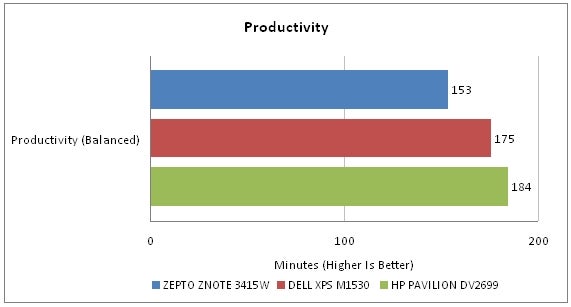