To pervert a well known phrase: there are gaming mice and then there are gaming mice. Sure, chucking a high-dpi laser and a couple of extra buttons to your bog standard rodent might convince a few people you have the next big thing in peripheral technology, but some gamers think you need to come up with something completely different to make an impression. And it’s this group of individuals that like to protest that using a standard mouse just doesn’t give you that true sense of immersion needed to really get into a game. 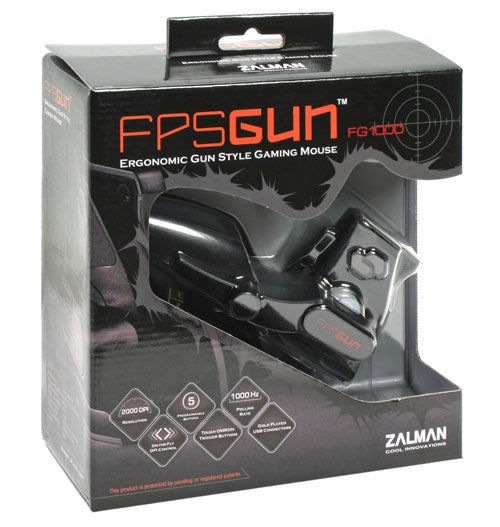 Enter Zalman and its FPSGUN gaming mouse. The name does a good job of giving away the USP, specifically that instead of using a conventional flat-handed design, Zalman has built this mouse around a trigger grip. The end result is certainly intriguing to look at and supposedly gives the user a better level of control in first-person shooters and thus improves ones gaming ability. I’ll happily confess to being something of an FPS addict (it’s a health addiction though, honest) so I was interested to see whether or not Zalman really could offer be a better experience with its latest toy.


Starting with the basics, the FPSGUN is certainly a curious looking beast and after first wrenching it from its packaging and overcoming the urge to run around the office pretending to shoot everyone with accompanying Star Wars-esque ‘pew pew’ noises, I thought it best to settle down to the serious business of testing. Alas, as with so many gaming mice I’ve seen recently, that first means the tedious installation of configuration software.

Luckily, though, the FPSGUN control panel is a pretty acceptable piece of software. Unlike the configuration suites bundled with many gaming devices, Zalman hasn’t been tempted into the usual pitfall of blazoning flashing lights and bright colours all over the place and has instead adopted a simple brushed-steel look and even manages to put all the various options, such as button configuration and sensitivity, under intuitively named tabs. The only bugbear is the Updates tab which actually just takes you to the Zalman website, a near-unforgivable sin in my book.


Still, the mouse offers you up to five profiles to choose from, and you can vary mouse button actions and sensitivity levels between them to a reasonable degree. Speaking of sensitivity, the FPSGUN has a maximum of 2000dpi and a minimum of 400. Unlike, say, the Steel Series Ikari though, the FPSGUN doesn’t allow you to vary at will between these ranges but instead has three different settings, High, Mid and Low. These are switched between by clicking a dedicated button which is conveniently in a placed to allow activation without interrupting gameplay – a small but welcome design touch.

Still speaking about design I can attest that whether you like the styling or not, Zalman hasn’t skimped on quality. The mouse feels sturdy enough and the buttons, especially the forwards and back buttons under the thumb on the side, have a nice click action to them. Likewise the position of the mouse wheel under the thumb is actually something I could get used to, as I find flexing my thumb to scroll down the TrustedReviews homepage more comfortably than using my index finger – but maybe I’m just weird.


More fundamentally, though I should point out that having used various ‘real’ guns, including air rifles and pistols, a couple of .22 rifles and a Cadet GP, I can confidently attest that the grip on the Zalman FPSGUN is not at all like any real weapon I know of. For a start the Zalman has a slight but noticeable tilt to the left which I expect does make long term use more comfortable but feels, for want of a better word, wrong. Being objective, I expect I’m in a minority of FPS gamers (in the UK at least) in that I have actually fired a gun not made entirely of pixels, so my complaint is probably not going to be reciprocated by many. 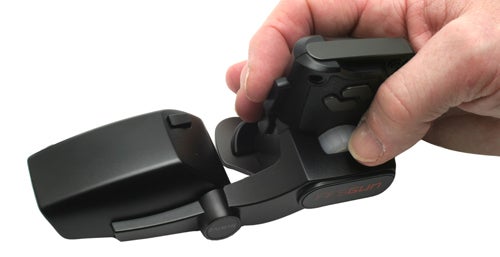 A problem that was common to pretty much everyone who used the FPSGUN was that there doesn’t appear to be anywhere to put ones little finger. What this means is that you’re either cramping your hand slightly or leaving your finger dragging across the mouse mat. In addition, if you do have your entire hand on the mouse itself, you have no contact with the surface it’s sitting on – those gamers who like keeping their palm in contact to help with tracking won’t be pleased with this.


Overall the design of the FPSGUN is probably going to be satisfactory for what I see as its target audience: mid-teenage FPS gamers. Notably their hands will actually fit the grip, which was too small for all of us in the office to use comfortably, and as they probably don’t get out enough even those living in London aren’t going to have held a real gun (at least I hope not) and thus find themselves annoyed by how unlike one Zalman’s imitation feels to use. 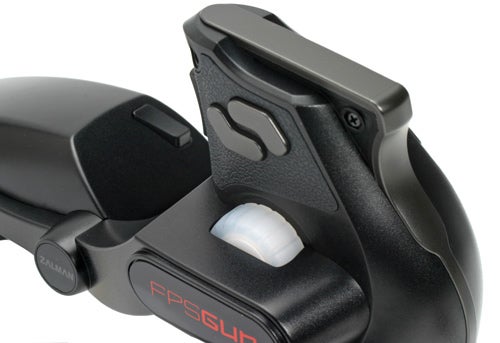 When it comes to actually using the mouse things become a bit more interesting and the phrase ‘mixed bag’ definitely comes to mind. Aside from those of you who spend more time on MSN and in chat-rooms than is healthy a large proportion of the time spent at a computer is probably spent wielding a mouse of some description. It’s therefore important to get a mouse that feels comfortable for desktop use. Alas, the Zalman FPSGUN is not such a device. Now, before I lambast it for this I will re-emphasise that it is of course a gaming mouse and thus judging it for desktop use could be considered unfair, but I would also then have to point out that every other gaming mouse we’ve tested has been equally good for day-to-day use.


Trying to use the FPSGUN in Paint Shop Pro X2, for example, proved a near impossible task and trying to navigate TrustedReviews’ admin engine proved more taxing than I could handle, so out came my regular old Razer Copperhead – my gaming mouse of choice when at home (because obviously I don’t game at work being the ethical sort I am). Anyway, there’s my proviso, don’t expect to be able to use this mouse outside of games because you will clearly be driven mad. That said; it’s on to the FPSGUN’s more natural territory.

Clearly a gaming mouse test wouldn’t be complete without firing up Counter-Strike and playing for a few minutes rounds a bit, so in the interests of science I gamely (pun not intended) took the FPSGUN home and set to work. After about 20 minutes or so I found I had acclimatised to the FPSGUN to the extent that I probably wasn’t noticeably worse than using a normal mouse. As Zalman says, FPS games are all about turning circle rather than vertical movement, and the forward mounted sensor does improve how quickly you can adjust your horizontal aim. The trade-off here is that vertical movement when you do need it is a fair bit harder, so you’ll want to crank up the y-axis sensitivity in the software suite.


In fact, spending a few minutes playing around with different sensitivity levels and biases I did manage to get the FPSGUN into a configuration I was happy with in Counter-Strike: Source and Team Fortress 2 which was pleasing. After two hours of playing Day of Defeat: Source I had pretty much stopped noticing I was using a different mouse at all, which probably says as much about my level of skill in that game as it does about the FPSGUN (modest much? – ed.). 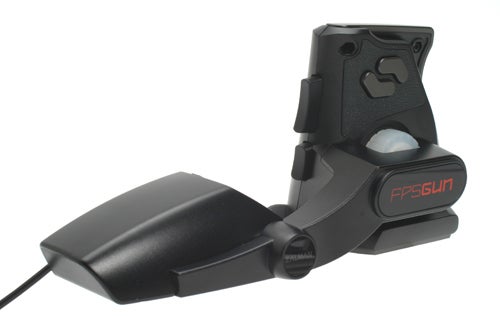 Switching over to Crysis, the horizontal bias of the FPSGUN made it self known almost immediately. As anyone who’s played will know, Crysis involves a couple of segments where quick vertical aim adjustment is just as important as horizontal, with Helicopters buzzing around the sky and various enemy soldiers camping out on cliff tops with sniper rifles. Even with the vertical speed bumped up to the maximum in the mouse’s software, I found that the way the FPSGUN is held makes quick up and down movements ungainly and, as a result, ended up as cannon fodder more often that not.


After all the excitement with these straight-out shooters I decided I needed something with a bit more plot and Portal seemed the way to get it. At first things seemed OK, although as with Crysis the restricted vertical movement was again annoying, but in the later levels where quick and accurate mouse movements are needed in order to progress, the FPSGUN just didn’t afford me the level of precision I get from my more conventional Razer gaming mouse. 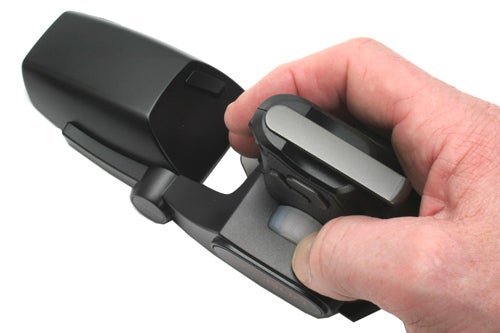 The basic conclusion derived from all this, then, is that in a limited amount of shooters the FPSGUN isn’t much worse than a normal mouse, but it still isn’t quite as good as a similarly priced ‘normal’ gaming rodent. In non FPS games, though, and desktop work, the FPSGUN is pretty much unusable compared with a normal device so realistically if you wanted to use the Zalman, you’d need to have a secondary device for these situations.


It is that consideration over everything else which stops me from recommending the FPSGUN. If Zalman could tweak the design a bit so that it was a little more accommodating for hands belonging to anyone over 16, then I might have found it a bit easier to use. However, I can’t help but feel that the audience that would think a gun shaped mouse is ‘cool’ will probably find it comfortable to use so perhaps that isn’t as big an issue as it seems.


Ultimately the FPSGUN is one of those products apparently created to fill a gap in the market that doesn’t really exist. Sure, there may be a few kids who get a kick out of using a mouse shaped like a gun on their favourite Counter-Strike server. I’ll happily admit that the Zalman FPSGUN is a nice enough device to use but for the asking price you can get a significantly better normal shaped device from, say, Logitech or Razer.


If you’re short on gimmicky presents to bundle along side some real gifts for your son’s birthday and he happens to be into PC FPS games then by all means, knock yourself out and throw one of these into the mix. But if you’re looking for a gaming mouse for yourself, there are many better options out there.