A cheap and compact travel drone that makes one too many compromises.

What is the Yuneec Mantis Q?

If DJI is the Coca-Cola of drone brands, then Yuneec is Pepsi. It’s well regarded and makes a decent product – but it definitely isn’t the market leader. The Yuneec Mantis Q aims to change that by offering some better features and specs than the similarly sized DJI Mavic Air, at a cheaper price.

With long battery life and voice controls, this 4K-shooting camera drone has been on our radar for a while, so we were excited to finally get our hands on one, take it for some test flights and find out if DJI has anything to worry about.

The Mantis Q is a travel drone, built for portability and convenience – the sort of thing you can toss in a backpack or overnight bag when you’re heading off for the weekend away.

To that end, it weighs under 500g, and both it and its bundled twin-stick controller fold down to tidy, compact blocks. The drone is only slightly larger than the DJI Mavic Air in this form. 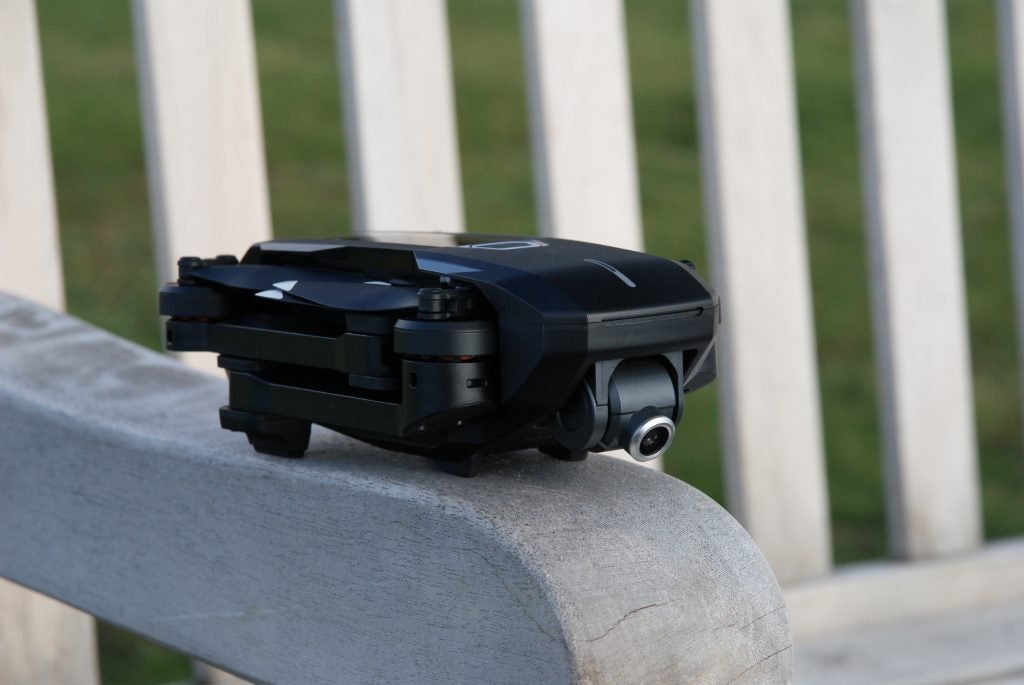 Folded down, the Mantis Q is very portable and only slightly larger than the DJI Mavic Air.

While made of noticeably cheaper-looking plastic than the DJI Spark and DJI Mavic Air, the Mantis Q feels solid and sturdy; you could certainly store it in a bag with other items and not have to worry about bits snapping off. If you do damage any of the folding rotor blades (which is far more likely to happen by the drone hitting something in flight), the base pack does contain a spare set.

There’s no built-in storage; footage and photos are stored on a microSD card, which slots directly into the side. A 16GB card is included in the box, which is enough room for 40 mins of 4K or 100 mins of 1080p, and there’s a USB-C port for transferring footage and photos to your computer, should you prefer to leave the card installed.

Sadly, that port won’t charge the removable battery, which needs to be placed in an external AC charger. The one provided in the box can charge four batteries simultaneously. This might seem like overkill, given that most users will probably stick with the single supplied battery, but it’s useful for anyone who stocks up on spares (which cost around £55 apiece). It takes about an hour to fully charge the battery. 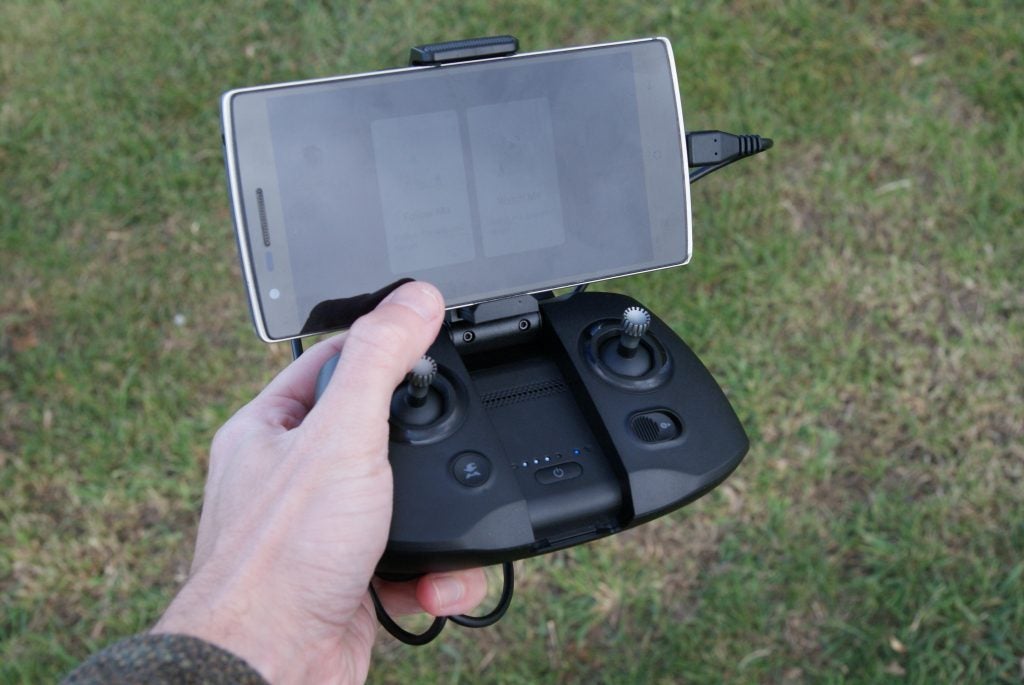 The Mantis Q’s companion app is simple to use, but lacks features compared to the DJI Go app.

The controller is a simple, minimalist twin-stick affair that feels comfortable in the hand. It has a spring-equipped smartphone holder to keep your mobile firmly in place while you’re piloting the drone, a full-size USB port for connecting said smartphone (Yuneec includes a short cable for USB-C phones, but users of Lightning- and micro USB-equipped devices will need to source a cable from elsewhere), and a USB-C port for charging its built-in battery, which takes around 2.5 hours.

There are physical buttons for engaging the return-to-home function, taking a photo, recording a video, tilting the camera and switching between regular and Sport flying modes, with all other controls taken care of via the companion app.

The companion app, which is called Yuneec Pilot, works with Apple devices running iOS 9.0 and above and Android devices running Android 5.0 and above. It shares what might charitably be called a ‘familiar look’ to DJI’s Go app, but comes with fewer options. It’s simple to use, which is refreshing, but some might prefer the granularity of DJI’s app, which allows for an almost-unbelievable amount of adjustment to controls and settings.

While it has GPS-based location tracking to keep the drone clear of no-fly zones, and allow it to automatically return to its take-off point in the event of a lost signal or low battery, the Mantis Q can’t match the Mavic Air for safety features. There are downward-facing sensors to aid indoor stability, but no sensors on the back or front to prevent collisions. You’ll need to be careful when flying. 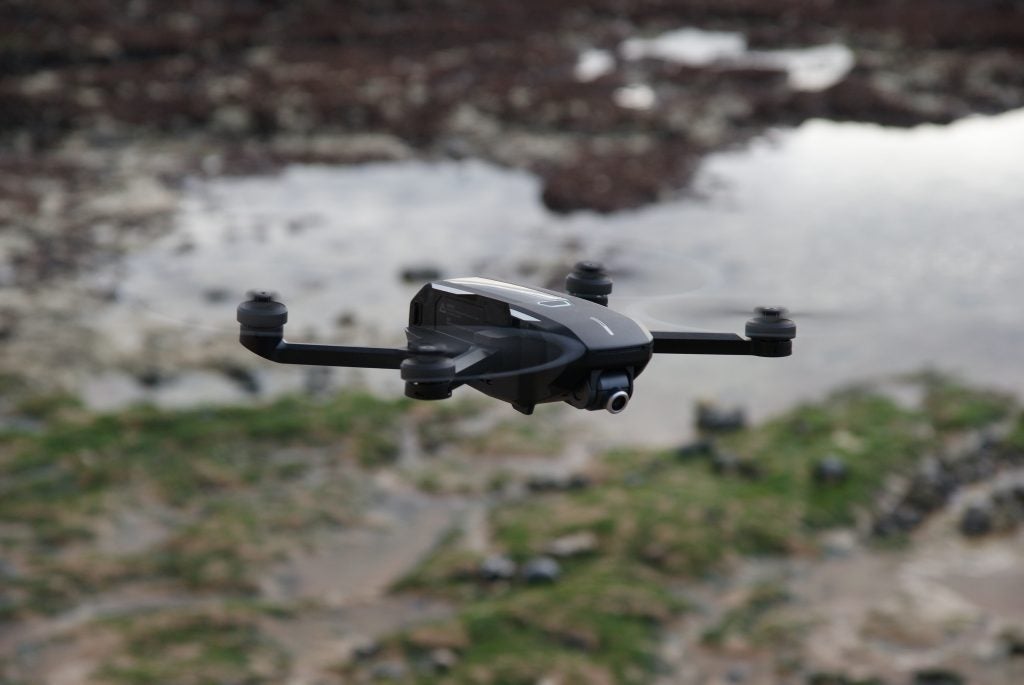 The Mantis Q is agile and speedy in the air – in fact, it’s one of the nippiest quadcopters around.

It’s surprisingly speedy and responsive, though, particularly when you flick the Sport mode switch on the controller. With a top speed of 72km/h, it’s one of the nippiest compact quadcopters around. It’s a lot of fun to fly.

The Mantis Q has stamina, too, with a 33-minute maximum flight time per charge. This will drop drastically if, for example, you’re flying in windy conditions, since the drone will be fighting to maintain its hovering position. Nevertheless, it’s still a lot longer than the Mavic Air’s 21-minute maximum flight time. For a drone designed with travellers in mind, this is a boon. 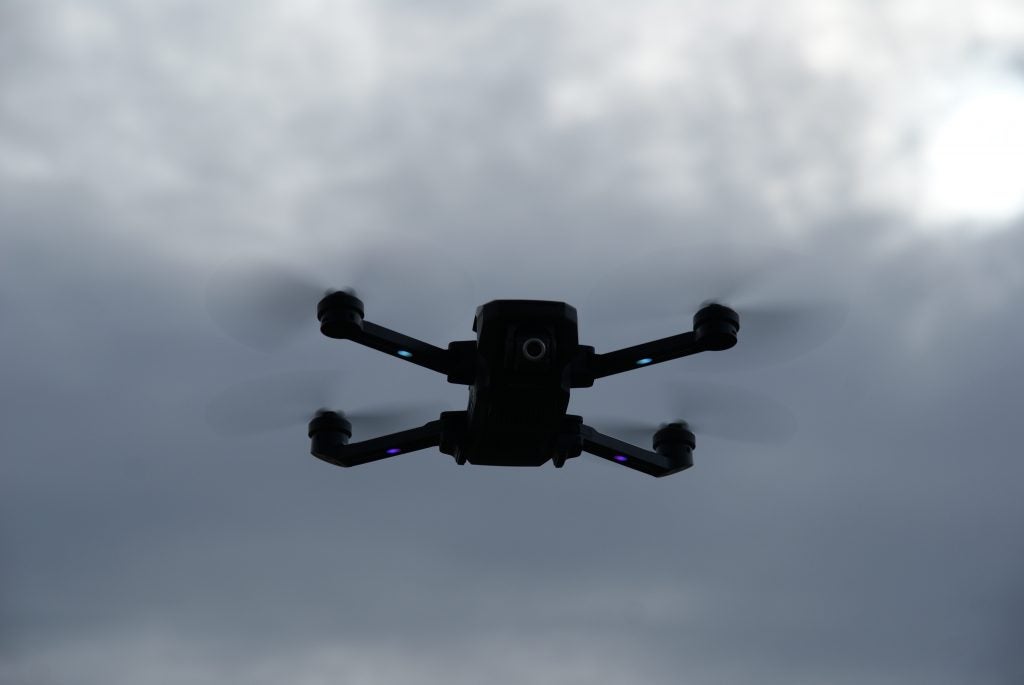 You can fly the Mnatis Q up to 800m away from the controller, although UK drone laws mean you have to keep it in line of sight.

Range-wise, Yuneec claims the Mantis Q will work up to 800m away from the controller, depending on obstacles and interference. I didn’t attempt to put this to the test, as I wanted to keep it in visual range while flying, but during our time with it we never experienced any drops in signal, and the live video feed from its camera to the smartphone app remained stable and clear.

The app features a handful of shot modes such as Point of Interest (which circles around the point directly below the drone) and tracking, but nothing particularly exciting. There are voice and gesture controls, too – the former allowing you to say, for instance, “take a video” to start recording, and the latter allowing you to grab a quick selfie by waving your hand. However, we didn’t feel drawn to using them much, as the controller is much more precise and tactile.

Related: UK drone laws explained: Where can and can’t I fly my drone?

For most people, image quality is the major factor when considering a drone. How good is the Mantis Q’s camera, then? On paper, it looks fairly impressive. It’s capable of 4K and 1080p video at 30fps or 720p video at 60fps, and still photos in JPEG or DNG RAW format at up to 4160 x 3120 resolution.

In reality, it suffers greatly from its lack of a three-axis gimbal, which means the camera doesn’t stabilise itself level with the horizon while flying. Push the controller sticks to move and the camera will bank and dip with the drone’s body; rivals such as the DJI Mavic Air keep it rock-steady in the same set of circumstances.

Yuneec’s solution is electronic image stabilisation, which essentially crops down the video frame and tilts it to compensate for movement. However, this requires you to reduce video resolution to 1080p, and only works to a point. Watch the clip to see for yourself how it fares in a bit of wind, but we weren’t terribly impressed with the “wobbly” nature of it. The 1080p quality is also fairly soft, while 4K looks sharper but is far more prone to shakiness.

The small sensor struggles a little in low light, and even in daylight there’s some grainy noise visible in the JPEGs. That’s something a lot of people can probably live with –but, once again, the DJI Mavic Air is far better when it comes to footage quality. 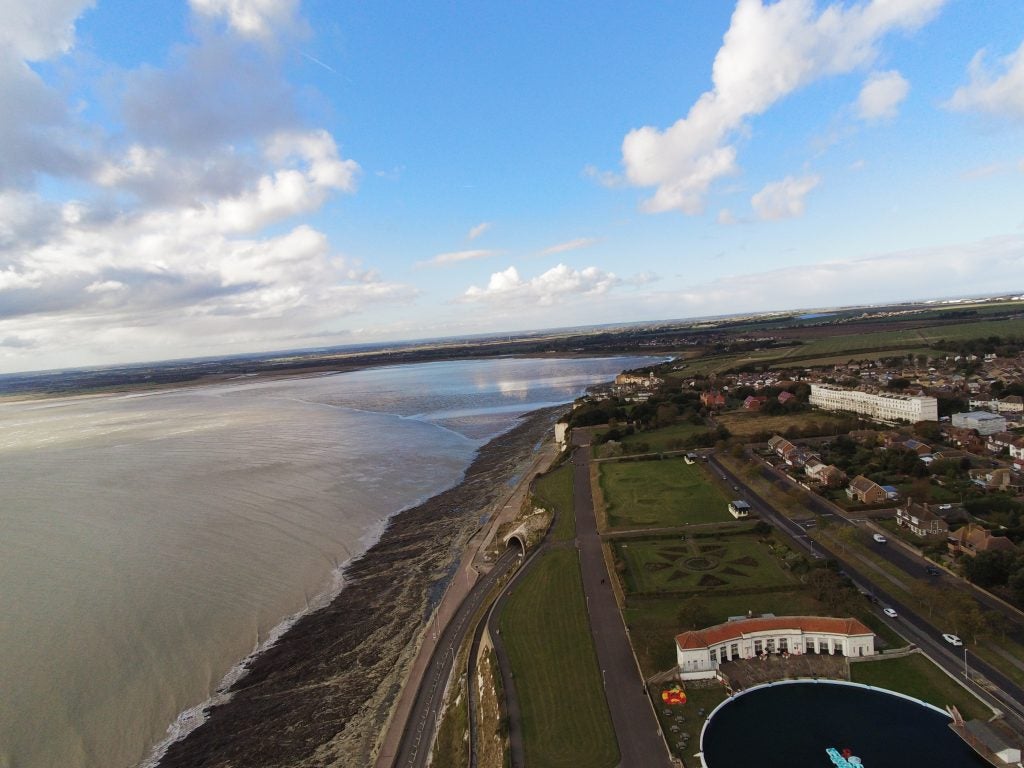 The Mantis Q’s 13-megapixel still photos are decent in good light, but it struggles in gloomier conditions. 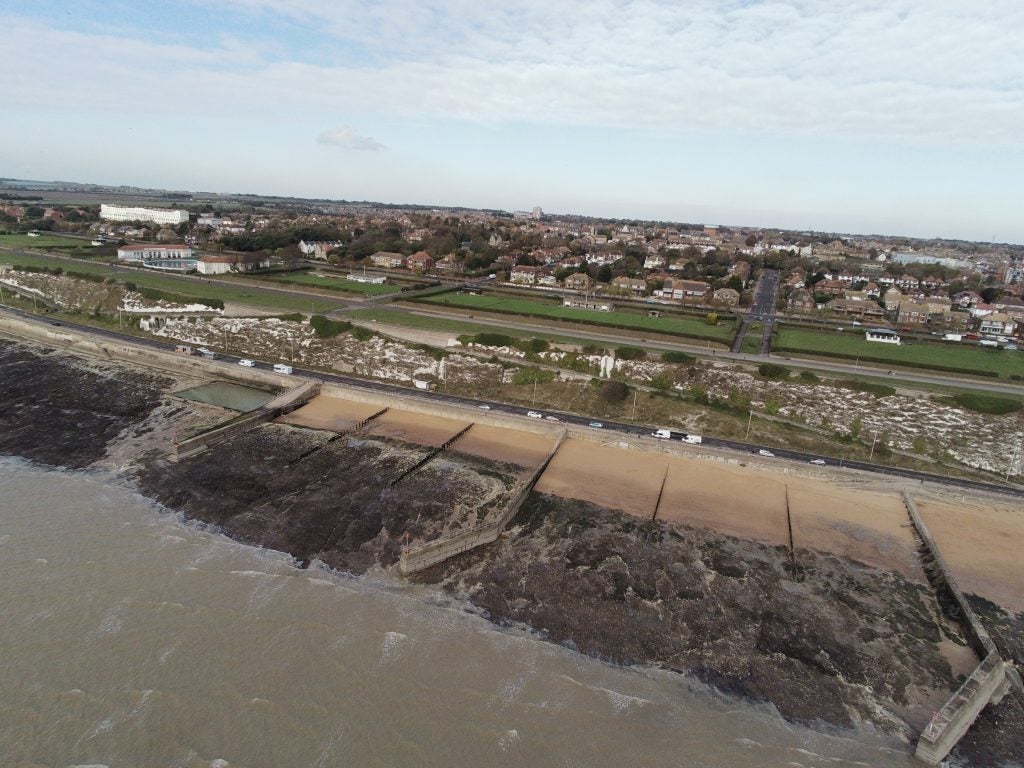 In some daylight scenes you can see a little grainy noise in the Mantis Q’s still images.

Why buy the Yuneec Mantis Q?

The DJI Mavic Air is a significantly better drone than the Mantis Q when it comes to safety features and image quality, and it’s even slightly smaller and lighter – but the real question is: at around £769, is it worth over £300 more than the Mantis Q?

Personally, while I found the Mantis Q’s lack of a 3-axis gimbal disappointing, I realise that getting all the features and performance we want in a £450 drone just isn’t going to be possible.

For many, the Q’s battery life – about ten minutes longer than the Mavic Air’s – and its cheap price tag could make it a better buy than the Air. But it does feel like a compromise, particularly when you’re trying to fly it in anything stronger than a light breeze.

If you don’t mind limiting your drone photography to a few aerial snaps and some snazzy low-altitude selfies, it can do a decent job for you. But if you want stable footage from high, the Mantis isn’t equipped for the task.

A cheap and compact travel drone that makes one too many compromises.