Having spent the past 13 years serving up clips of cats, sneezing pandas, seals that scream like humans, and one or two other non-animal-related videos as well, YouTube has finally launched its own dedicated music service: YouTube Music.

In recent years, the standard YouTube site has been more popular among those avocado-munching millennials than most music-streaming services, so the move makes sense. However, can it convince them to pay for something they currently get for free? 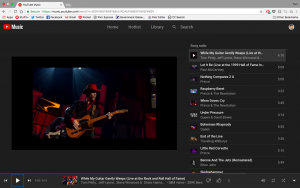 The layout of YouTube Music is so similar to that of Spotify it’s practically a tribute act.

At the bottom of the mobile app (or the top, if you’re on the website) there are icons for Home, Hotlist and Library. Home shows personalised suggestions for albums, playlists and videos – some based on the time of day, others based on your listening history.

The Hotlist is where you’ll find a selection of 20 songs that are ‘new, cool and trending’, so you can stay away from that if your idea of contemporary includes bands such as Bon Jovi and U2.

Library is where you’ll find playlists you’ve made or subscribed to, songs you’ve ‘liked’ or saved offline, and artists and albums you’ve chosen to bookmark. 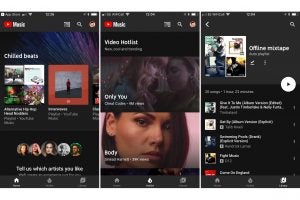 It’s basic but clear, although an album I was downloading got interrupted halfway through and wouldn’t finish without me deleting it and starting again. On mobile it’s also quite easy to accidentally hit the ‘like’ or ‘dislike’ buttons when you’re trying to skip tracks.

There’s no desktop app for YouTube Music, it just runs in a web browser. This is good if you want to access it from a computer that isn’t yours, but can prove irritating if you accidentally close the tab in which it’s running. You can restore it from your history, as is the case with any other tab, but it won’t remember the track you were playing or how far through an album you were.

Band synopses and descriptions of albums are often too long for the space, with the text often cut off. Those that do fit are badly formatted and difficult to read. It just lacks the editorial attention that you’d get from something like Apple Music. 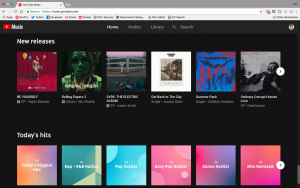 YouTube Music doesn’t appear to publish a total number of songs available on its service, but for the most part you’ll struggle to trip it up with your searches.

Without comparing every artist across platforms it’s impossible to say how they compare with total accuracy, but I did notice some strange gaps that you wouldn’t get with Spotify or Apple Music – namely Kaytranada’s album ‘99.9%’, Radiohead’s ‘In Rainbows’ and ‘Up’ by Ohbliv.

The National’s recent live album is also missing, but shows as the most recent release on both aforementioned services. It’s not as if The Beatles are absent, but it’s worth pointing out that YouTube Music doesn’t yet appear to be a priority for bands and labels.

However, unlike Spotify, Apple Music et al, YouTube Music has a way to fill these gaps. Its best trick by far is that it gives you the option to listen to audio-only versions of YouTube videos. So, if there’s a song that isn’t available in the standard catalogue, you can be pretty sure some enterprising fan will have uploaded it in video form. A toggle switch allows you to view the video as well, if you’re so inclined, but that means you can’t play it in the background and stash your phone in your pocket. 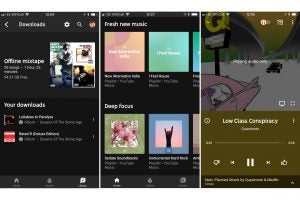 This audio-only mode means you get easy, on-the-go access to items such as the mash-up of Drake’s Hotline Bling and the Nintendo Wii Shop music, Prince absolutely melting the faces off the front row at a Rock ‘n’ Roll Hall of Fame show, or Chromeo performing I Can’t Go For That in Daryl Hall’s shed (seriously, go and listen to it now), without having to load the video every time, or resorting to one of those dodgy YouTube-to-MP3 rippers.

There’s one restriction to this: you can’t cache them offline without upgrading to YouTube Premium, which costs an additional £2 a month. Of course, you’re also restricted in terms of sound quality, as it depends entirely on the original upload.

In fact, in general there’s very little in terms of available settings to tweak. There are no choices when it comes to sound quality, so you get the default 128kbps – which might have been just about acceptable in 2003, but isn’t really now.

Considering the low bit-rate, YouTube Music actually does quite well: it doesn’t sound awful. Audio is flatter and a bit one-dimensional when compared to Apple Music or Spotify, but for those not tremendously fussed about hearing every scrape of a guitar string, it does a decent enough job. However, when you consider that better is available elsewhere for the same price, you’d have to be pretty keen on that video content to settle for it. 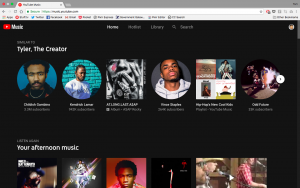 YouTube Music has a pretty wide selection of curated playlists, but they’re all a bit uninspiring.

It doesn’t help that the titles tend to be so bland and nondescript: Supersonic Sing-Along, Alt-Frequencies, Heavy Stereo. If anyone knows what kind of music is to be found under any of those, answers on a postcard please.

Find one you like and the content tends to be on-brand, but the selections are often a little bit obvious. This limits the potential for discovering new music. While its title is more helpfully descriptive, Cinematic Post-Rock is full of Mogwai, Sigur Ros and Explosions in the Sky – bands I love, but which I’m perfectly capable of putting on myself.

Kings of the Rap Game began by playing two songs from Dr Dre’s 2001 in a row and, as good as that album is, that’s a cardinal playlist sin. Its choice of ‘The Good, The Bad and The Ugly’ by Consequence and Kanye West is unexpected (although it does pick the clean version), as is ‘Get Down’ by Nas – but the same artists and albums kept popping up.

On mobile you also get something called an Offline Mixtape – a playlist of between 1 and 100 tracks (it’s up to you) that’s auto-generated from your listening habits and likes, and cached offline so it’s always available to listen to. The result is a mixed bag, neither full of favourites or bursting with brand-new music to be explored.

Perhaps it will improve over time, but it doesn’t come close to matching what Spotify or even Apple Music is doing with recommendations.

Related:  Spotify Review: How music streaming should be done

YouTube Music doesn’t have any connectivity tech of its own, but the app supports both Apple’s AirPlay and Google Chromecast. They’re activated by tapping on the respective icons at either the top or bottom of the ‘Now playing’ screen.

That gives you a fairly broad range of products that you can connect to – but, like Apple Music, it’s fewer than Spotify Connect offers. Neither allows you to switch as seamlessly between devices, either.

Other streaming services offer videos, but it always feels a bit pointless when YouTube exists – but this literally is YouTube.

Full functionality isn’t quite there – as you’d expect, it’s largely restricted to music; it will also find stand-up comedy routines – but it isn’t just official music videos you’ll find either. There are lots of radio sessions, channels that specialise in live recordings, and other material you just won’t find anywhere else.

Obviously, there’s no need to spend £10 a month to access these, but the aforementioned audio-only mode essentially means they extend the available catalogue by a significant degree. You’ll need that YouTube Premium subscription to offline them, but if they represent a significant portion of what you listen to then it may well be worth it.

There’s a generous three-month free trial available for both, should you want to try before you buy.

Related: Best headphones 2018: music on the go at every budget 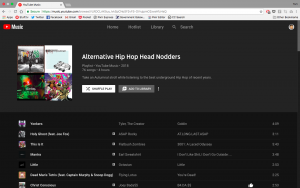 For YouTube Music to make its mark it needed to be cheaper than its rivals, or offer must-have functionality you can’t get elsewhere. Audio-only playback of videos is certainly unique but it’s hardly essential, and to use it to its fullest you have to shell out the extra £2 for YouTube Premium.

In every other respect YouTube Music is a passable Spotify clone, but you don’t have to look very far to expose its lack of depth. Discovery features feel distinctly last-gen and the general user experience feels a step behind the alternatives, which are available for exactly the same monthly cost.

If you listen to a lot of live sessions, DJ mixes and the like, it might be worth auditioning YouTube Music. For the majority of people, however, you can get better elsewhere.

Gets the basics right, but YouTube Music is a step behind its rivals.