The YotaPhone runs on Android 4.2.2 Jelly Bean so it’s a little behind the latest Android 4.4 KitKat update. It is at least a relatively untouched vanilla version of Jelly Bean so you can still expect a clean, slick-looking operating system. There’s access to Google Play and you’ll find the settings menus and key
characteristics like notification bar are just as you’d expect to find on a standard Android Jelly Bean smartphone.

The quirks come courtesy of the gesture-based controls. The touch zone is situated below both screens but controls are not consistent across both. On the front you can swipe left to go back a screen and swipe once more to go back to the homescreen. Double-tapping in the middle of the surface brings up multitasking, and swiping two fingers down from the top of the screen sends a screengrab to the back of the e-ink display. Around the back, you can simply swipe right or left to skip through pages of an eBook for instance.

Finding the sweet spot is often very difficult and it’s all too easy to miss the gesture altogether. We’ve lost count of the amount of time we spent trying to swipe two fingers on the screen only to pull down the Android notification bar instead. 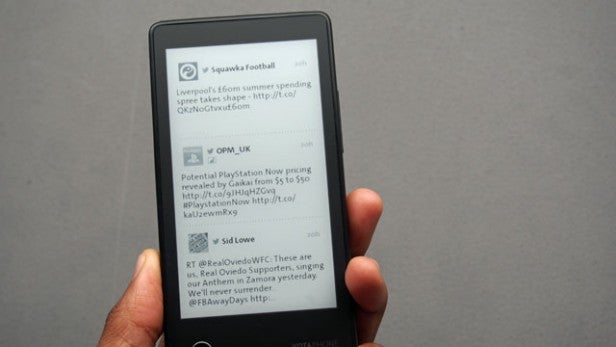 The YotaPhone, along with the usual Google suspects like Gmail and Google Play Video also includes nine YotaPhone optimized apps that live in their own drawer in the app launcher. They are easy to spot thanks to their black and white coloured app icons (apart from the MapsWithMe and OfficeSuite applications). They are a definitely a mixed bag in terms of their usefulness and some are still built for Russian users and have not been optimized for English-speaking users.

Bookmate is the dedicated ereader app made up of a free service and a cloud based subscription service. Currently it’s only available in Russia and the free books include a handful of classics including HG Wells’ Time Machine. An icon at the top of the interface lets you quickly send the ebook to the back screen without gesture swiping and you’ll be able to skip through pages on the e-ink side.

Internet Hub focuses on sending social network streams like Facebook or Twitter and RSS feeds to the back. It can be set up to launch alerts in the morning giving you a quick overview before turning on the phone. For Twitter this works nicely and lets you sift through three pages of tweets although you obviously can’t click to open them. 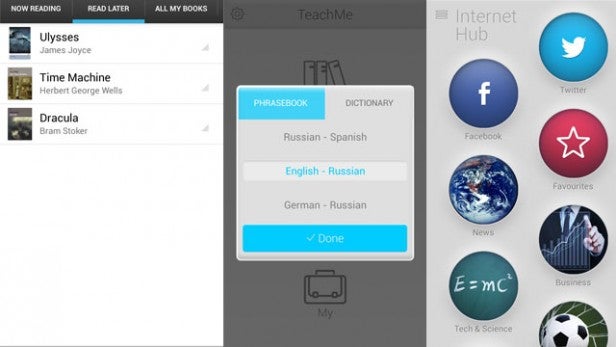 Additionally, there’s a pretty basic notepad app, the language learning TeachMe, a Tutorial to help become more familiar with the phone’s gestures and a really nice Wallpaper mode. Here you can use existing photos or download some directly from Facebook for example and give them the black and white treatment.

The apps work well but at the same time are limiting and not the full package, especially the Ereader application. There are some good ideas in there like sending notifications to the back but it lacks one really killer app that would convince you to swap LCD for E-ink.

The YotaPhone runs on a 1.7GHz dual-core Snapdragon Processor with 2GB RAM which sounds like respectable specs for a mid-range smartphone and in theory makes it more powerful than the Samsung Galaxy S4 Mini and the HTC One Mini.

It does give the YotaPhone a nice zip switching between homescreens and launching apps but it’s a far more laboured experience for web browsing or when you begin to multitask. Pages are slow to load over Wi-Fi and 3G and trying to run multiple apps begins to have an impact on performance.

For gaming, there’s an Adreno 320 GPU which is more powerful than the Adreno 305 GPU in the Moto G and the HTC One Mini and does manage to handle more visually demanding games like Real Racing 3 well with little signs of lag or framerate issues.

In the Geekbench 3 multi-core benchmark tests it scores a 1106 which is slightly lower than the cheaper Moto G (1155). Compared to the similarly priced Xperia Z1 Compact based on a more impressive Snapdragon 800 quad-core processor the Sony scores 2836. Putting it under the 3D Mark Ice Storm Unlimited benchmark tests it scores 10578, which compares to 19012 for the Z1 Compact.

For the money, you can definitely get a much slicker experience elsewhere and is something Yota needs to address if it’s to make an inroads.