Yoshi's Crafted World may not be challenging or ambitious enough for those looking for the next best platformer, but its cute cardboard-crafted charm offers gamers of all ages a fun collectathon-focused experience

Yoshi’s Crafted World feels very much like a sugar-loaded dessert. Younglings and those with a sweet tooth for collectathon platformers will find this charming adventure irresistible thanks to the plodding pace and gorgeous arts-and-crafts art style. But anyone who likes their 2D platformers to have a bit more substance will likely find all the sweetness here tooth-achingly tedious.

Reaching the end of each level is ridiculously easy, with little timing or precision required to progress. That’s especially true when you factor in the generous checkpoints and trademark Yoshi flutter jump that provides a second chance of salvation following a mistimed leap. You won’t find the next Yoshi’s Island here.

Instead of testing the reflexes of your thumbs, Yoshi’s Crafted World encourages curiosity and exploration, putting all of its focus on collecting every coin, health item and flower scattered across each stage. This helps it feel unique compared to the rest of the Nintendo Switch’s portfolio of platforming titles rather than a cardboard copy of the likes of Donkey Kong Country: Tropical Freeze and New Super Mario Bros. U Deluxe. 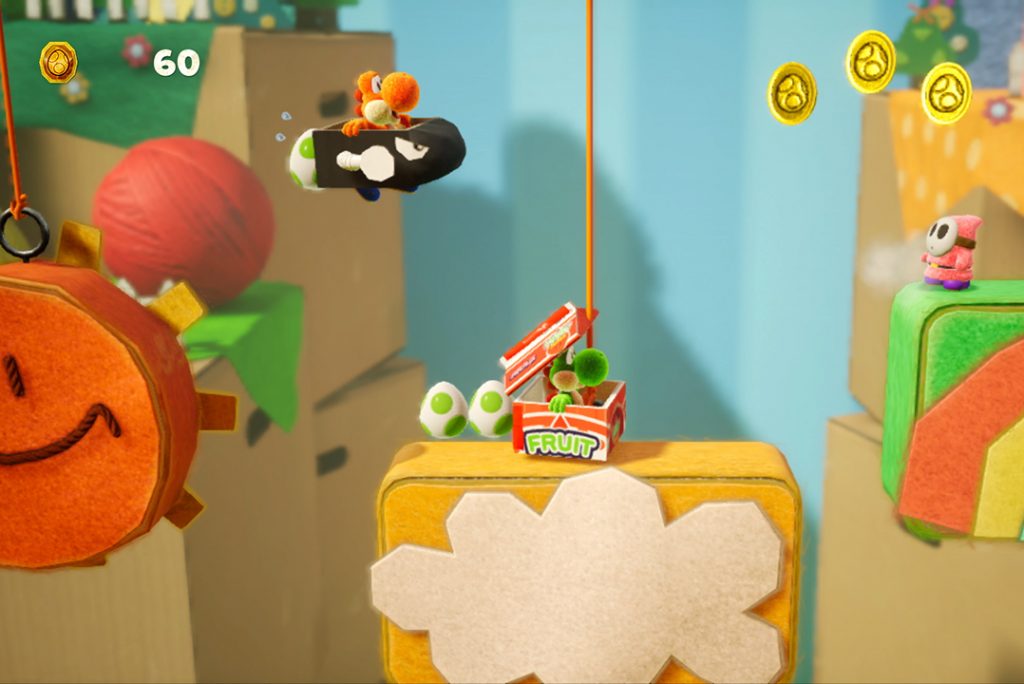 Developer Good-Feel even gives you an incentive to become a completionist, with flowers required to unlock new stages and coins needed to purchase adorable cardboard outfits. The bite-size length of each level also encourages you to play each level again and again.

Even after the credits roll, you’ll be urged to plunder previous worlds as upon 100% completion you’ll be rewarded with a mini firework display, which sounds insignificant but is hugely satisfying. You’ll also be treated to some bonus treats if you amass enough flowers post-game, but I won’t spoil the exact details.

Some of the timed challenges seen in various levels are genuinely difficult too, demanding accurate egg launches or speedy platforming skills. It’s these tasks that elevate Yoshi’s Crafted World from a trivial cutesy adventure to a collectathon platformer that gamers of all ages will happily sink hours upon hours into. 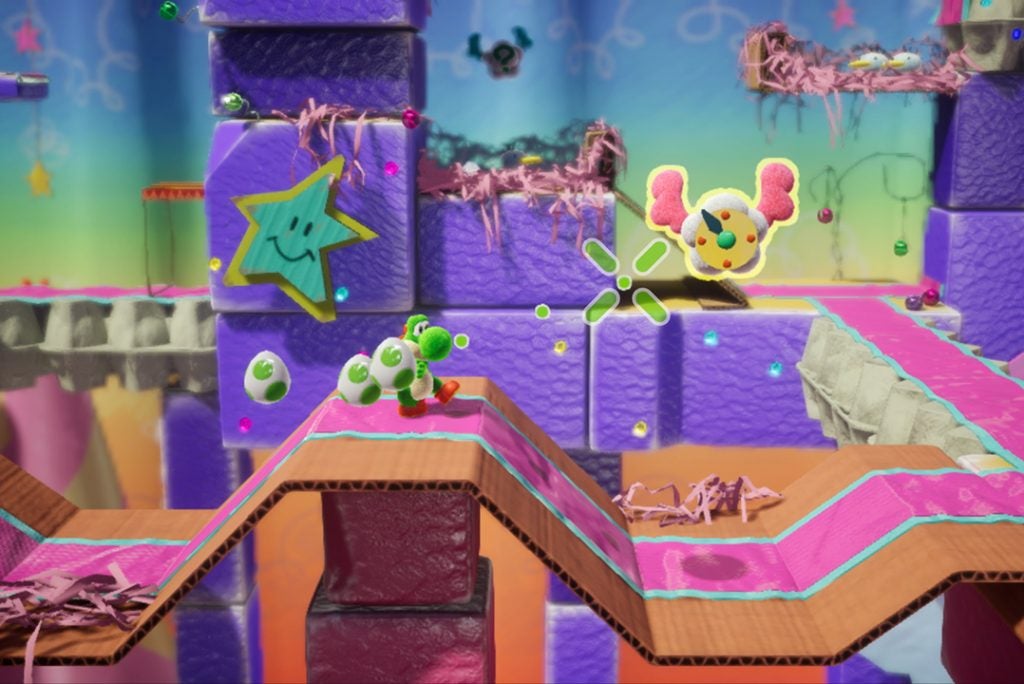 Hit a winged cloud with an egg, and the stage will temporarily flip for a timed challenge

You’ll be happy to replay levels multiple times for the lovely art style alone. From the cardboard-cutout clouds to the toilet roll trees, everything you see in Yoshi’s Crafted World is made from household objects. These combine to create many beautifully constructed levels that are so cute you can’t help but grin.

With only two or three levels per world, Yoshi’s Crafted World is able to plough through various aesthetic themes at a fast pace. There are underwater level where paper-crafted fish dangled in the air via pieces of strings, dense jungles where cardboard critters will do their best to take a bit out of you and mine cart caverns where you’ll need to spit out explosives to destroy tin-foil rubble. Each stage also has its own signature game mechanic or obstacle too, whether it’s the zero gravity jumps in Outer Orbit or the slippery ice in Chilly-Hot Isles.

As you make your way through these colourful playgrounds as Yoshi, it genuinely feel like you’re journeying across the arts and crafts table of an incredibly imaginative child, engrossing you in a colour pastel world popping with life and boasting just as much attention to detail as Nintendo’s greatest hits. The whimsical music also adds to that adorably playful tone. 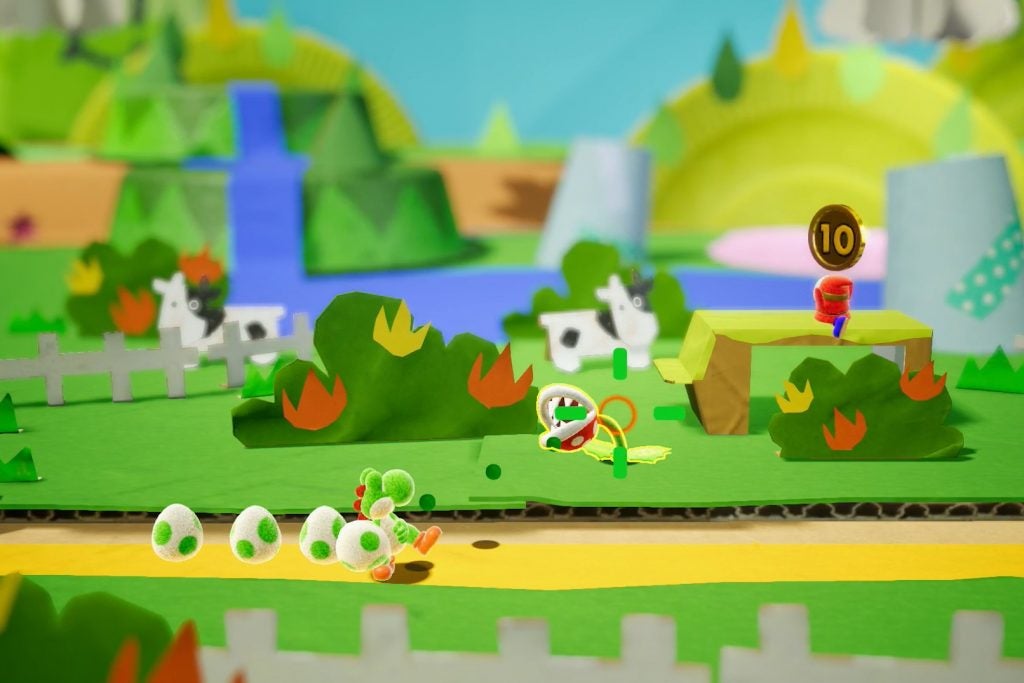 This arts and craft theme isn’t just a quirky aesthetic, also blending with the level design for many uniquely charming hazards and obstacles. If any object moves, there’s almost always a Shy Guy literally pulling the strings backstage or blowing through straws to make cotton ball platforms hover in the air.

Yoshi can interact with the environment too. You’ll use magnets to climb up metal cans, and stomp on pumps to blow up a cat balloon in order to frighten mischievous mice. Sussing out such solutions is satisfying, but developer Good-Feel provides enough nudges and hints throughout to prevent even the youngest of gamers becoming bamboozled.

There’s more to this Woolly World successor than a move from knitwear to cardboard though. For the first time in the series, Yoshi occupies a 3D space. This is still a 2D side-scrolling platformer of course, but you can now take divulging paths to move closer or further away from the camera, and can even hurl eggs at objects in the background for a chance of unveiling a hidden secret. This new feature makes finding all the collectables more challenging and rewarding, as you’ve really got to be alert and experimental to find every item. 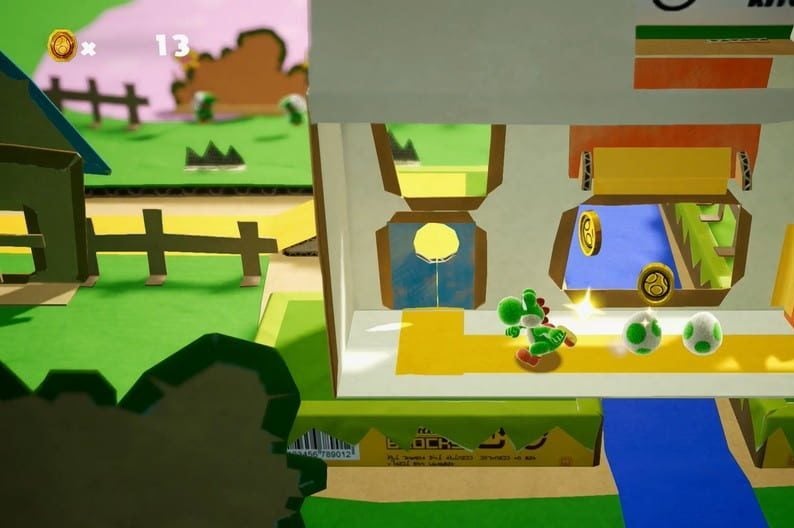 Crafted World takes advantage of the 3D space, as you venture down branching paths for hidden secrets

The new ‘Find Poochy Pups’ mode offers even more replayability for each level, flipping the stage back to front and presenting you with the task of locating three pooches within a given time frame. These challenges aren’t as rewarding or creative as those found on the original stages, but the new mode at least offers a fresh perspective on previously completed stages. You’ll see the back-end of poorly painted tin cans and hidden wiring of various lights and gizmos, almost as if you’ve got backstage access to all the cardboard clockwork running the show.

There’s also the odd unconventional stage requiring you to amass a high points tally in order to win flowers. These range from crushing cardboard creations in a hulking Yoshi robot to guiding a toy plane through a bomb-infested air route. These levels offer a refreshing change of pace to the typical platforming ventures, while also proving be some of the more memorable and fun experiences. 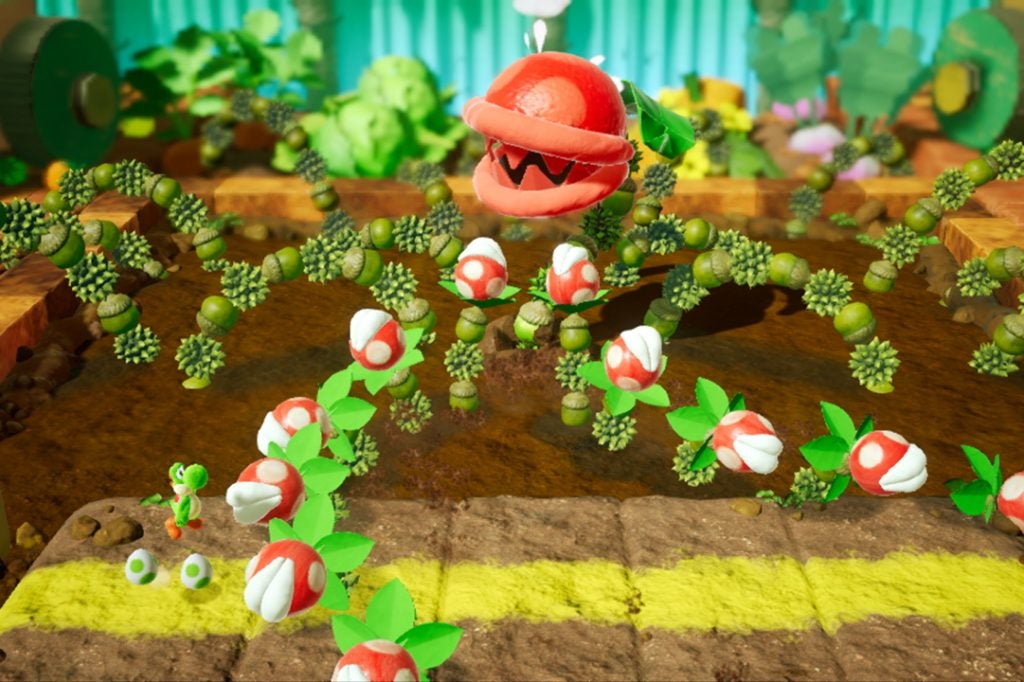 And then there are a handful of boss fights thrown in that help advance the story. These are probably some of the weakest stages in Yoshi’s Crafted World, as they usually just consist of jumping over obstacles and throwing eggs at the right moment, and so quickly become bland and repetitive.

The villainous double act of Baby Bowser and Kamek at least contribute to some hilarious cutscenes before and after the boss encounters. These scenes essentially make up the entire story, as the pair seek out the Sundream Stones which are capable of making the holder’s wildest dreams come true. As with most Nintendo-published game, the story is here just to provide a compelling reason to reach the finale as well as a few laughs along the way – it’s certainly not a main focus.

Related: The first Xbox Live game for Nintendo Switch has been confirmed 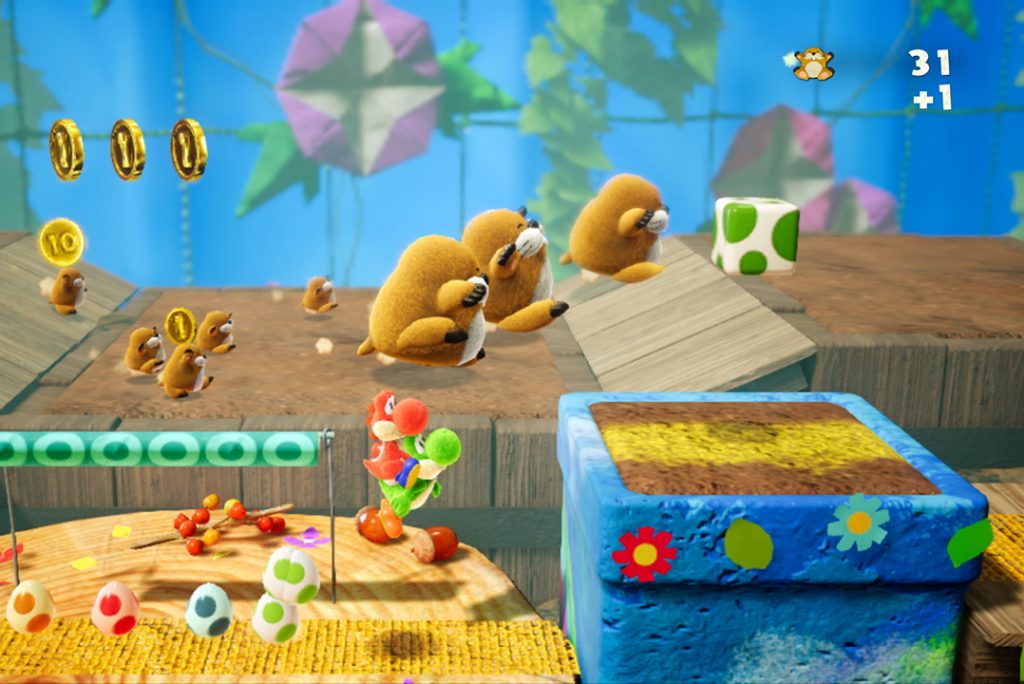 Legs getting tired? Hop onto your pal’s back for a piggy back

Want to double up with a friend? No problem, as you can play each stage with a pal. Co-operative modes such as this usually makes grabbing coins and flowers mind-numbingly easy, but since you can gobble up your pals, launch them at an enemy or jump on their back for piggy back ride, it can make the platforming hilariously chaotic.

I let out a few belly laughs as my friend and I raced to reach every collectable and inadvertently knocked each other into bottomless chasms. I can really see Crafted World being the perfect platformer for parents and young children to play together, with both parties being thoroughly entertained.

Yoshi’s Crafted World was a delight to play through, especially thanks to the stunning paper craft scenery. In terms of presentation, this as good as anything Nintendo has produced, which is an incredible accomplishment.

Does Crafted World rank as one of the Switch’s best platformers? Not quite. This is a simple collectathon at heart that never really attempts to strive to be anything more. Children and those craving a cutesy cathartic adventure will love this new Yoshi entry, but those looking for a challenge are better off looking elsewhere.