In Yooka-Laylee’s opening hours, I was in my element. An action-adventure game soaked in humour, developed by ex-Rare employees, it had everything I thought I wanted. Its strong appreciation for old-school gaming hooked me. However, as is often true of the past, it’s never as good as you remember; and over time, Yooka’s collect-a-thon fades away to a tough grind with frustrating mechanics and infuriating boss fights.

If you’ve been waiting for a new Banjo-Kazooie then this is it, or the closest you’re going to get to it. Swap Yooka and Laylee for bear and bird and you’ll be doing pretty much everything you were back in the 90s. Wandering around a large open playground space, filled with different planets full of collectibles to progress and unlock new abilities. This is a quintessential Rare adventure.

Yooka and Laylee must collect ‘Pagies’ from their book, which has been stolen by the evil Capital B, who’s trying to please his shady CEOs. After your book is taken and its 145 Pagies scattered across the land, you’re free to explore and find them.

Playtonic has prided itself on not holding the player’s hand, leaving them to indulge in the adventure however they see fit. At first it’s incredibly liberating. Wandering around the first play area – Tribalstack Tropics – it’s wonderful to walk up and interact with the game’s kooky cast of characters, all of whom are full of witty one-liners and humourous quips. 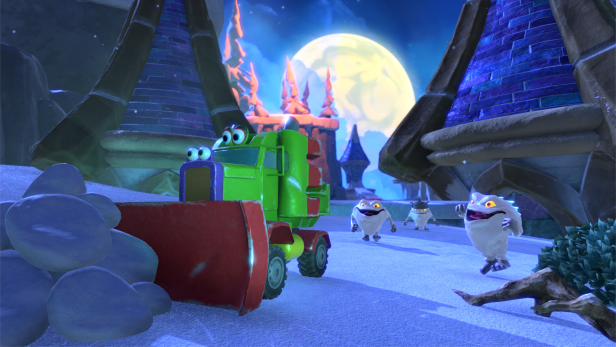 Pagies aren’t the only collectibles in the game, with Quills operating as the other major item to hoard. Quills unlock new abilities that can be bought from Trowzer, basically Only Fools and Horses’ Del Boy in snake form. Yooka and Laylee can learn to barrel roll for greater speed; Laylee can emit a sonar blast to shatter glass and even eventually fly. Each of these skills plays a role in unlocking Pagies, and gives you a reason to go back and explore departed worlds once you unlock new abilities in other places.

Working through the game at my own pace meant I was able to enjoy the experience as it unfolded, and in the early hours this was great. However, the further I progressed, the more this proved a burden.

Playtonic uses the collect-a-thon mechanic as a means of progression through the main narrative. You must ‘spend’ a certain number of Pagies to unlock each game world, then invest again in the same world to expand it and unlock even more stuff to do. The final boss requires you to unlock 100 Pagies, and this is where Yooka-Laylee transitions from the quirkily obscure to the frustratingly obtuse.

There are 25 Pagies in each world, and in some locales I’ve struggled to find even half of them. I wouldn’t mind working hard to earn them, but on many occasions I’ve failed to even find the character or area in which I can try to obtain another Pagie. This means that much of my time was spent meandering through worlds – although well-designed and colourful – annoyed at the fact that I couldn’t find the next “thing” to do. 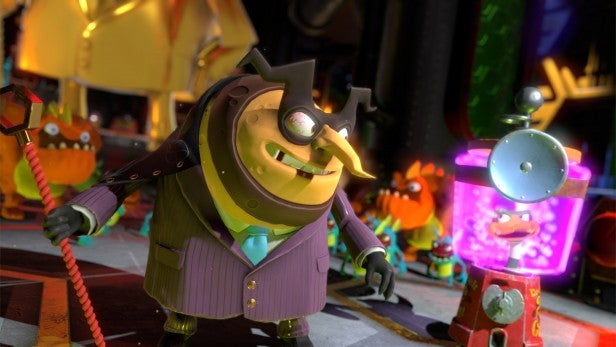 It’s a shame this becomes such a huge problem later in the game, as I was having such fun when ticking over collecting stuff at a gradual pace. Perhaps having a dedicated in-game character that offered hints as to the location of the next Pagie, without directly giving the answer, would hugely improve the current setup, which mainly involves wandering around like a lost child in a supermarket.

Also, some of Yooka-Laylee’s characters and their game mechanics work far better than others. Rextro, a quirky 80s dinosaur, offers mini-games on his arcade machine. The game in each world is different, but all the games are  hi-score chasers with a simple premise. A kart racer, a Temple Run-style lane runner or scrolling shooter, each is super-enjoyable. However, other character-specific mini-games are a nightmare; Kartos is a particular low point.

It offers up the on-rails karting sections, much like in the brilliant Donkey Kong series, except in Yooka-Laylee there appears to be an inherent struggle between the 2D mini-game and 3D environment. While riding Kartos, you must collect enough diamonds before reaching the end of the track to earn a Pagie. You can speed up, slow down and shoot cannonballs out of his mouth to clear obstacles and enemies. But as Kartos twists and turns around the rollercoaster track, the cannonball flies all over the place, rather than following the path of the rails.

This makes sense in the real world – the shot should fly whichever way Kartos is facing – but in game terms it’s infuriating trying to shoot a barrel that is right in front of me only for the cannon to shoot off at angles making it impossible to hit obstacles, leading me to crash into things, lose diamonds and force a restart of the entire section. 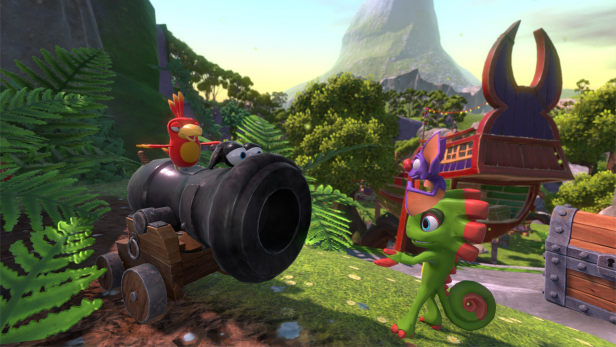 The frustration on wheels carries over to most vehicle sections of the game, which involve Yooka and Laylee transforming. By speaking to a tentacled scientist our heroes can transform into an entirely different concoction, but in most cases it will be some form of vehicle. The problem in this new state is that our heroes still control as if they’re people, meaning turning can be fiddly around tricky corners and ledges, making platforming a real pain.

This is particularly infuriating in Galleon Galaxy, in which, while playing as a ship I had to complete a boss fight, wonky controls and all. However, the controls are the least of your worries when it comes to boss fights in Yooka-Laylee.

It’s so disappointing that the longer I played, the more Yooka-Laylee felt like a gradual decline. The combination of all of Yooka-Laylee’s skills manages to keep things interesting, and the five worlds are incredibly varied, which  makes exploration a lot of fun. But big chunks of the game are marred by such drawbacks that often plague adventure games, especially ones with old-school sensibilities.

Yooka-Laylee is a nostalgic old-school adventure, but it’s too retro for its own good. Frustrating game mechanics, annoying boss fights and the complete lack of guidance become infuriating as the game progresses.

Hopefully, in Yooka-Laylee 2, Playtonic finds a balance between new and old – because it’s quite clear the
magic isn’t lost; it just needs a few new tricks.