What is the Yi 4K+ Action Camera?

The original Yi 4K Action Camera was a GoPro Hero 4 Black rival that cost you considerably less money. The follow up 4K+ Action Camera model follows a very similar template but upgrades its capabilities with 4K video at 60fps, which is a first for an action camera. Even the GoPro Hero 5 Black and Sony FDR-X3000 both top out at 30fps.

What this means is you can expect much smoother footage even when shooting at the highest resolution. There’s also 120fps at 1080p shooting for slow-motion footage and electronic image stabilisation makes a return.

Building upon many of the great aspects of the Yi 4K Action Camera, the 4K+ is still a great action camera for capturing your adventures but its lack of built-in waterproofing holds it back in the face of the GoPro Hero 5 Black. It’s also not quite as amazing value once you factor in the optional waterproof casing and other accessories. 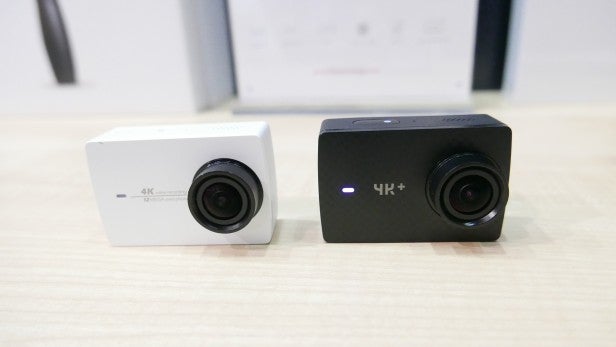 The updated model’s dimensions are identical to the older model, measuring 65 x 42 x 30mm. It has slightly simpler branding on the front and carbon fibre-like patterning. Otherwise it’s hard to tell the two models apart.

On the back is a 2.19-inch touchscreen used for framing your shots and navigating the menus. It’s coated in Gorilla Glass, which I’ve found has stood up to me throwing the camera in a bag without any worries. 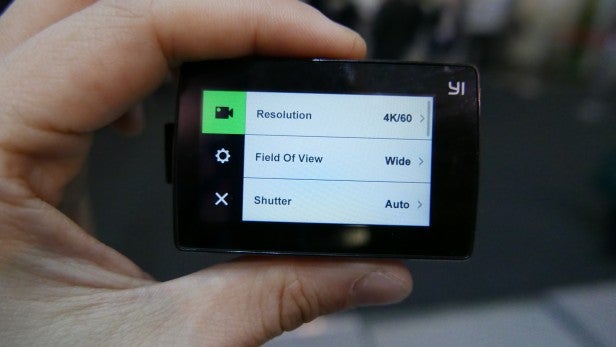 The touchscreen is your primary way of interacting with the 4K+ Action Camera aside from the single shutter button on the top.  The menu system is identical to the previous 4K Action Camera so if you’ve used that before you’ll feel right at home. There’s not been any massive evolution like the change from the GoPro Hero 4 to the Hero 5. LEDs on the front and back make it obvious when the camera is recording. 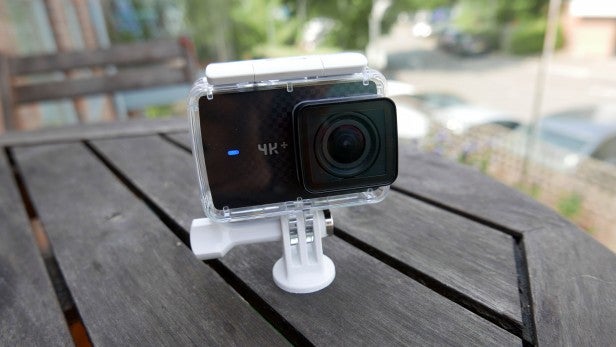 The 4K+ Action Camera is available standalone or as a Waterproof Case Kit, which includes the waterproof housing. Without it the 4K+ Action Camera can’t be used to capture your aquatics-based fun. The case adds a decent amount of size and weight to the camera but includes a standard GoPro mount on the bottom.

Otherwise, the camera’s main body has a tripod thread underneath so you’ll potentially need to pick up an inexpensive adaptor if you want to use GoPro-style mounts, which are more readily available.

The lack of any any included mounts is still a frustration, though. Pick up a GoPro or countless any other action cameras and you’ll expect to receive basic sticky mounts as standard. None are included here even with the Waterproof Case Kit. 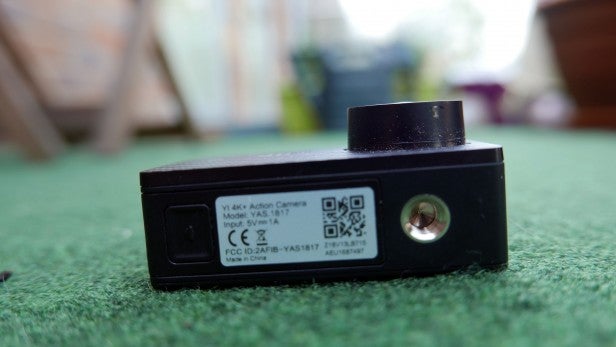 The other annoyance with the waterproof case is that you’ll need to pop it open to change any settings using the touchscreen, which can obviously be risky if you’re in the water. I’ve used third-party cases for the Yi 4K Action Camera in the past that include a capacitive yet still waterproof rear membrane material that let you still use the touchscreen so it’s a shame one of these isn’t included.

On the side of the camera you’ll find a USB-C port for charging and faster data transfer, which has changed from a Micro USB on the standard 4K Action Cam. The USB-C port can also now be used for connecting an external microphone if you want better audio capture.

The bottom of the camera gives you access to the user replaceable battery, which is the same battery as used in the older camera. Handy if you have any kicking around like I do. The microSD slot is also hidden away here.

The reliability of the 4K Action Camera’s Wi-Fi pairing was one of the best I’ve seen from an action camera and thankfully that remains the same with the 4K+ model. There’s still dual-band Wi-Fi, meaning you can toggle between the superior range of 2.4GHz or the faster transfer speed of 5GHz and I found no issue with the reliability of either.

I mainly left it in the 5GHz mode, which sees data transfer speeds to a paired smartphone of about 6MB/s, which is pretty swift.

Taking a page from the GoPro Hero 5 range, there is now voice controls but I found these both a mouthful to initiate but also unreliable when outdoors. You can issue commands like ‘Yi Action record video’ or ‘Yi Action turn off’ but unless you’re right next to the camera these commands often get lost.

The camera pairs  with the Yi Action companion app for iOS and Android, which guides you through the process of connecting to the camera’s Wi-Fi network. The app lets you change all the settings you would expect as well as providing a live view of the sensor, which is handy if you have the camera mounted out of the way. The delay in what’s shown on your phone is only minimal, too. I generally resorted to this whenever I needed to remotely trigger the camera rather than using voice. 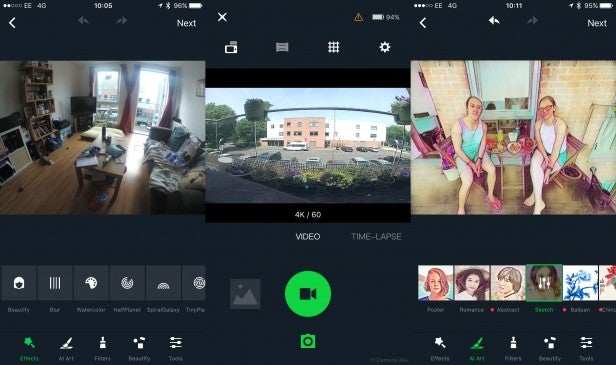 The app will also let you trim and share videos easily and for still images you can apply filters and image effects like a pseudo-tiny planet view similar to what’s available on 360-degree cameras. They’re fun for a few minutes but not something I see people using regularly, similar to the Instagram-like side to the app where people can share their content.

Next
Video and image quality, battery life and verdict Review