Home cinema soundbars are taking off big time thanks to the growing number of people getting fed up with their feeble flat-panel TV speakers but can’t commit to a full home cinema system. There are aesthetic benefits too, as they can be discreetly integrated into a TV stand or placed on a wall-mounted shelf without eating up a great deal of space.

Perhaps the most active manufacturer in this growing market sector is Yamaha, which was one of the first companies to launch such a product and now boasts six models in its range. I remember visiting Yamaha’s Hamamatsu headquarters back in 2004 and hearing a demo of its first soundbar – the results were good if not earth-shattering, but the technology has moved on a great deal since then and recent products from Yamaha and rivals Denon, Marantz and Philips have ably demonstrated the possibilities of the technology. We’re hoping this new model from Yamaha can take wireless surround sound to new heights.


Like other soundbars, the YSP-500 fires out precisely controlled sound beams that reflect off the walls into the areas where speakers would normally be – all without a wire in sight. It features a built-in digital amplifier that powers 16 beam drivers at 2W each, with the two subwoofers given 15W each, amounting to a total power output of 62W. You don’t need any other equipment – all of the decoding and amplification is performed inside this one box.

And what a good looking box it is too, boasting a smart silver finish that makes a refreshing change given today’s black-is-best mentality. The front sports a minimal selection of buttons, including volume control, and a slim display that offers information about the current input and sound mode. The unit’s construction is first rate, making it feel satisfyingly solid, robust and reassuringly heavy.


The back panel offers a decent array of connections for external components, which includes two pairs of analogue phonos, three digital audio inputs (two optical and one coaxial), a subwoofer output and a composite video output for viewing the unit’s on-screen setup display.

As you might expect from such an audio-centric product, there’s a wide selection of sound modes on board. The most significant is the choice of beam modes that govern how the sound is dispersed around the room. My Surround generates surround sound without relying on reflecting beams off the walls, which is better for awkwardly shaped rooms that don’t reflect sound well, or if the listening position is close to the unit. My Beam focuses all of the sound towards a specific location, while the 5 Beam, 3 Beam, 3 Beam + Stereo and 2ch Stereo modes all offer different configurations depending on your room setup, the source material and your personal tastes.

The unit decodes raw Dolby Digital and DTS bitstreams from a DVD player or Sky+ box, and if you want to transform stereo material into pseudo surround sound, then Dolby Pro Logic II and DTS Neo:6 are on hand to do so. The unit also features TruBass, which serves to make bass output sound richer and deeper, while the Night Listening Enhancer makes sound more audible at low volumes. 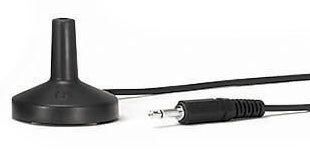 Setting up the unit is a simple process thanks to the IntelliBeam Automated System Calibration. Plug the supplied microphone into the jack on the front panel, place it on the cardboard stand, activate auto setup and the unit emits a series of test tones which are analysed by the YSP-500, allowing it to select the appropriate audio settings for your room, including the levels, angles and frequency response of each beam. But if you’re feeling adventurous, there’s an astoundingly detailed set of manual adjustments covering every parameter you could possible think of, and you can check your settings with a built-in test tone. 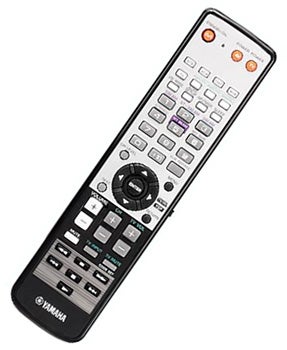 The unit is supplied with a remote, which is fairly large but comfortable to hold, with big chunky buttons laid out in a user-friendly way. You can also programme it to control other components in your system.


The mixed results we’ve achieved with soundbars and 2.1 systems in the past have left us feeling slightly sceptical about the idea, but the YSP-500 completely restores our faith. This is one of the most convincing digital sound projectors we’ve encountered, producing a surround effect that genuinely sounds like a real 5.1 speaker system.

”Saving Private Ryan”, piped from a DVD player via the optical digital audio input, sounds fantastic with the unit set to 5 Beam mode. During the Omaha Beach landing scene, bullets ping round the room just like they would using real rear speakers, and surround effects are projected adjacent to and occasionally behind the listening position, which in this case was a good 9ft from the unit.


But it’s not just busy action-packed scenes that show off the YSP-500’s prodigious talents. Subtle effects and gentle ambience are also convincingly reproduced, with the driving rain during some of Ryan’s tense battle scenes almost completely enveloping the listening position. 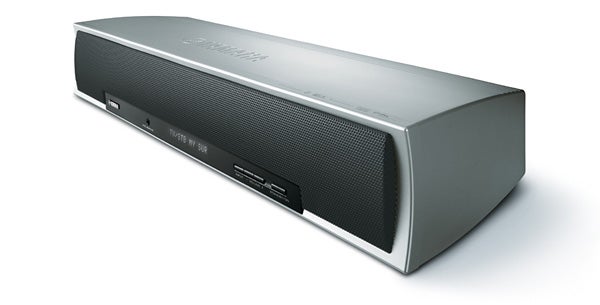 The different beam modes are very effective. My Beam is much more direct and audible, but you lose the expansive soundstage offered by 5 Beam, while My Surround works well when you’re close to the unit. But what’s most impressive is the system’s flexibility – there are enough modes and adjustments on board for everyone to find the perfect sound for their room.


Aside from its surround capabilities, the YSP-500’s sound quality is highly impressive. John Williams’ score sounds rich and captivating, dialogue remains prominent despite the movie’s cluttered sound design and the two on-board woofers muster a satisfying amount of bass that removes the need to connect an external sub. The power it generates is a real surprise considering its compact size.


On the downside, you still don’t get the directness that real rear speakers offer, and the effect is better with more obvious surround material like action movies – give it a rom-com and the effect is harder to discern.


Yamaha’s pioneering work in the field of digital sound projection is really coming to fruition, as the YSP-500 offers arguably the most convincing surround effect of any soundbar we’ve come across. Its sophisticated sound beam system works really well, producing an expansive soundstage that can’t quite match the directness and power of a real 5.1 speaker system but comes damn close.