It may look like a regular soundbar, but the YSP-2200 is actually a ‘Digital Sound Projector’, which brings movies to life in a more sophisticated way than the majority of soundbars on the market. By reflecting beams of sound off the walls in your room, the 7.1-channel YSP-2200 aims to more accurately mimic the effect of a real multichannel speaker system than typical ‘virtual surround’ modes.

It’s the latest in a long line of Yamaha Sound Projectors (YSP) dating right back to 2004 when the company launched the YSP-1 (a product we had the privilege of hearing at Yamaha’s Hamamatsu HQ prior to its launch). Based on technology dreamed up by Cambridge-based 1 Limited (now Cambridge Mechatronics), the idea is to provide a convenient, one-box home cinema without losing out on surround sound immersion.

Since then Yamaha’s engineers have worked hard to improve the ‘below par’ sound quality of the first effort (their words, not ours) and eight years later this version looks to raise the game not only in terms of sound quality but also convenience and design.

Design
The main unit of the Yamaha YSP-2200 is big and bulky by usual soundbar standards, and isn’t really designed to be mounted on the wall. But because the unit itself measures just 50mm high, with removable feet that can be adjusted to a height of between 29mm and 39mm, it won’t get in the way of the TV when placed on the same surface.

It’s an attractive unit, clad in Yamaha’s customary black finish. The aluminium top panel sports a brushed texture and glossy trim, while curved edges soften the look. Black mesh runs the entire length of the front panel and bends round the sides, through which you can just about make out the 16 beam drivers that project sound into the room. Far right is a tidy LED display panel, which can be used to set up the system, while on top are standby, input and volume buttons. 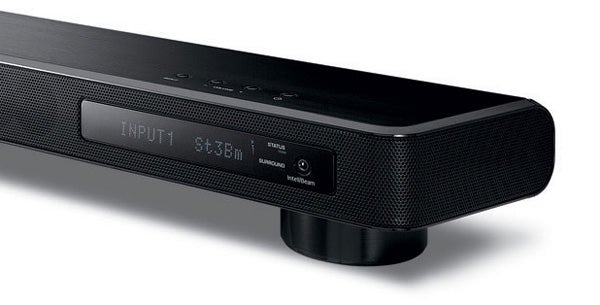 Build quality is absolutely superb. It’s the first YSP to uses a rigid aluminium enclosure, which has been carefully designed to damp vibrations and rules out the need for internal shielding. This high-quality approach is evident fresh out the box – its heft is hugely satisfying.

It comes with a passive subwoofer that can be installed vertically or horizontally, the latter allowing you to place it on an AV rack shelf. Its compact dimensions (435 x 137 x 350 mm) will be very welcome if space is tight. This is the first YSP to feature a separate subwoofer enclosure, a move brought about by Yamaha’s realisation that most people pair their soundbars with a separate sub anyway.

Connections
The main unit’s rear panel offers an unusually generous line-up of sockets, including no less than three HDMI inputs and one ARC-compatible output – all of which are equipped to handle 3D signals. That’s great news if you have several devices (digital TV boxes, games consoles, Blu-ray decks) that you’d like to benefit from Yamaha’s sonic wizardry.

These are joined by three digital audio inputs (two optical, one coaxial) and analogue stereo input. There’s a port for Yamaha’s optional accessories too, such as the YDS-12 iPod dock, YBA-10 Bluetooth audio receiver and the YID-W10 wireless iPod/iPhone dock system. The line-up is completed by composite video out to view the onscreen setup menu and a port for an IR remote extender.

Features
The Yamaha YSP-2200 comes with the sort of plentiful feature list that’s all too rare among soundbars these days. First up, it kicks out 132W of audio power from its digital amplifier and decodes Dolby True HD and DTS HD Master Audio, which means you can feed it bitstreams directly from your Blu-ray deck’s HDMI output. And call us superficial but we love that the format name pops up on the display panel.

It’s also equipped with 11 digital sound processing (DSP) modes, which tailor the sound to suit different types of material. In our experience it’s usually worth leaving these well alone, but you might have some joy playing around with them. They’re split into Movie (Sci-Fi, Adventure, Spectacle), Music (Music Video, Concert Hall, Jazz Club) and Entertainment (Sports, Talk Show, Drama, Game, Multichannel Stereo). 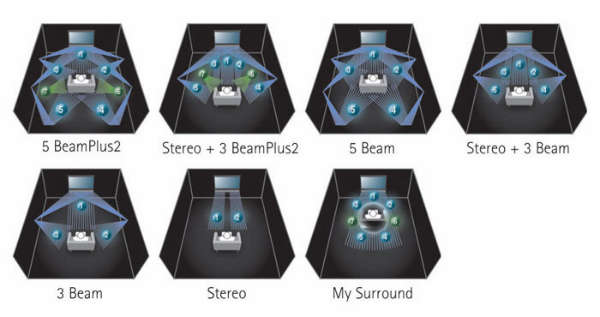 There are also several listening modes that use the beam drivers in different ways (see the picture above for an idea of how they work). The regular setting for 7-channel sources is 5 BeamPlus2, but you can select from Stereo 3BeamPlus2, 5 Beam, Stereo 3Beam, 3Beam, Stereo and My Surround.

Operation
Setting up the Yamaha YSP-2200 is an absolute cinch. The soundbar and subwoofer are connected using the supplied speaker cable, which hooks up to springclip terminals at either end. Once in place, Yamaha’s IntelliBeam automatic calibration uses the supplied microphone and a series of test tones to analyse the acoustic characteristics of its surroundings and set the appropriate levels, beam angles and frequency response.

Alternatively you can adjust the levels manually in the setup menu. This can be accessed on the front panel display, or your TV using the composite video output – sadly it’s not available through the HDMI out. Its layout is basic, using white text on a blue background, but gets the job done.

As well as sound adjustments – which are remarkably detailed for an ostensibly simple product – the setup menu lets you assign inputs, store settings in memory presets, change the display and alter the way IntelliBeam works.

It’s all controlled with consummate ease by the remote, which makes up in practicality what it lacks in coffee-table allure. The buttons are well spaced out, nicely sized and clearly labelled, with two rows dedicated to the various sound modes at the top and dedicated subwoofer volume controls.

Performance
In action the YSP-2200 is one of the best soundbars we’ve heard. When reproducing movies, its sound quality is remarkably assured, matching the sort of power, cohesion and refinement you’d expect from a decent separates system. Its sound is certainly large in scale, yet there’s plenty of texture and detail on offer and none of the top-end harshness that so often blights soundbar performance. 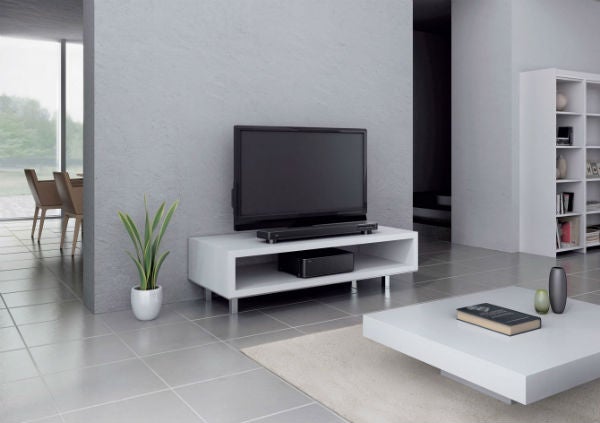 We first tried it out with Transformers: Dark of the Moon and the robo-chaos is handled with supreme confidence. As Shockwave rips through a warehouse, sending metalwork and soldiers scattering left, right and centre, the powerful effects are smooth, engaging and precisely placed within the room.

There’s a real sense of unity between the speaker drivers and subwoofer, resulting in dense, hard-hitting reproduction of bangs and booms. The sub is surprisingly tight and punchy for a passive box, suffering no ill effects from its self-imposed exile from the other speakers.

But the real revelation is how well the multi-beam technology works. In a modestly-sized room with curtains, furniture and an irregular shape to navigate, the YSP-2200 somehow manages to create a genuinely immersive and diffuse soundstage, wrapping the effects around the listening position without any apparent holes in the soundfield – plus the effect seems consistent no matter where you sit. 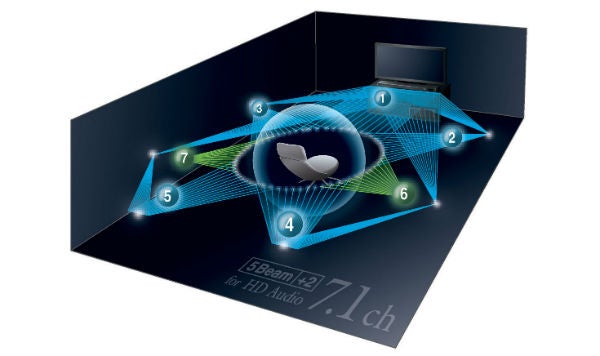 To hammer home the point we loaded up a DTS demo disc containing a 7.1-channel DTS HD Master Audio clip from Jurassic Park – the iconic sequence when the T-Rex first breaks out of its pen. The rain that lashes down throughout genuinely appears to envelop you – not just a faint hint of width as is so often the case – putting you right inside the scene, while the roar of the T-Rex is deep and hearty and the pinging of the wire fence is snappy.

A clip of X-Men: First Class is equally spellbinding. Jets engines are steered around the room beautifully, likewise the missile, which hisses swiftly towards the Russian ship and hits home with a full-bodied explosion – all the while underpinned by the powerful, pounding score. This is all rounded off by superb dialogue reproduction, which is clear and prominent at all times.

As for music playback, Incognito’s Surreal on CD sounds pleasant enough, but it doesn’t engage in the same way as movies, lacking the sparkle and range of a decent hi-fi system – but its talents elsewhere are so impressive that we’ll cut it some slack.

Verdict
The Yamaha YSP-2200 is the perfect rebuttal to those who thought soundbars could never come close to replicating the experience of a ‘proper’ home cinema system. The sound beam technology works a treat, bouncing off the walls to create a wide, immersive soundstage with no single sweet spot, while excellent detail, clear dialogue and the superbly integrated sub complete a stellar performance.

What’s more there are more features than you’d normally find on a soundbar, including HD audio decoding, full 3D support, tons of sound modes and a healthy line-up of sockets. And with auto setup, a decent remote and onscreen display, it’s easy to use. Even its build quality is up to scratch.

The only downside is that you have to pay a princely £800 for the privilege, but with features and performance like this, it feels justified.