The YSP-1600 soundbar – or Digital Sound Projector, to be precise – claims to bring real 5.1 channel audio into your living room without the need for rear speakers or even a subwoofer. It’s equipped with multiple drivers across the front that bounce sound beams off the walls, while dual subs within the cabinet deliver deep bass.

But surround sound is only part of the story. As part of Yamaha’s MusicCast family, the YSP-1600 is also equipped with a plethora of network-streaming and multiroom features, all conducted through a nifty smartphone app. AirPlay, Bluetooth and a whole host of other features make the YSP-1600 look like a very promising prospect on paper. Let’s see how it fares in practice. 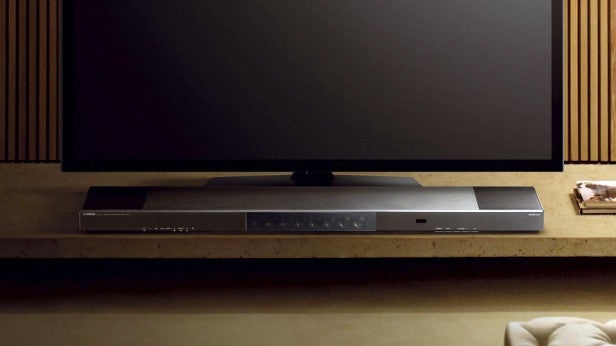 The YSP-1600 is a rather unconventional-looking soundbar, with a chunkier design than most rivals. With measurements of 65mm high by 130mm deep, it commands quite a lot of space on a TV stand and blocked my TV’s remote sensor – thankfully, there’s a remote repeater function.

Despite its unusual design, you can still mount it on the wall using the supplied brackets, screws and template. It’s best suited to larger TVs, from around 50in upwards.

It isn’t the prettiest soundbar, either. The styling is unmistakably Yamaha, with its all-black finish and sharp angles, but it lacks the aesthetic flair of an LG or Samsung. There are some nice touches, though, such as the brushed top surface and chamfered edges, and build quality is solid across the board. An alternative silver version adds a little more glamour.

Unusually the YSP-1600’s subwoofers are upward firing, and lurk behind the black grilles on top. The front panel plays host to a row of eight 2.8cm speaker drivers that sit behind a black metal grille – more on those later. 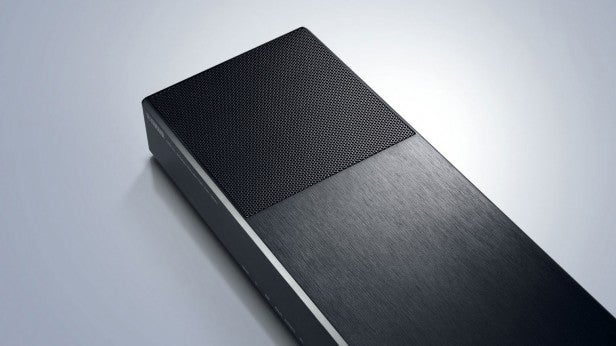 To the left is a row of LEDs that light up incrementally as you increase the volume, or flash in different combinations when you select certain modes. It’s all a bit confusing, and you can’t tell what the lights refer to from the sofa. A text-based display would have been better.

At the opposite end is a row of five buttons, including a Connect key to join the YSP-1600 to a wireless network, plus volume, input and standby.

The back houses a healthy selection of sockets. It’s a case of quality over quantity – yes, there’s only one HDMI input and one output, but they’re HDMI 2.0 with 4K 60p passthrough and HDCP 2.2 support (plus ARC on the output).

They’re backed up by optical and 3.5mm analogue inputs plus Ethernet and a subwoofer output. Annoyingly, the Wi-Fi antenna sticks up in front of the screen. 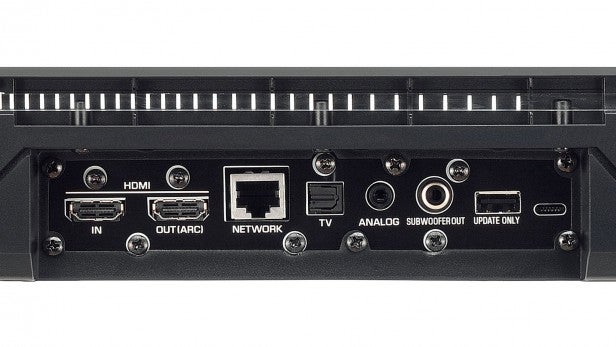 The YSP-1600 is packed with features. The Wi-Fi and Ethernet connections let you connect the YSP-1600 to a network of other MusicCast-compatible speakers and stream music to all of them. You can even re-stream audio from external devices connected to the YSP-1600, such as Blu-ray decks, TVs and Bluetooth.

The brains of the operation is the MusicCast app, which lets you stream music from your phone, PC or NAS drive, as well as Spotify, Napster, Juke and vTuner internet radio. A decent selection, although some may lament the absence of Tidal and Deezer.

Yamaha keeps Apple fans happy with AirPlay support, while Bluetooth streaming should please everyone else. There’s even a Bluetooth output function that lets you beam audio from the YSP-1600 to wireless headphones or speakers. This is one versatile system. 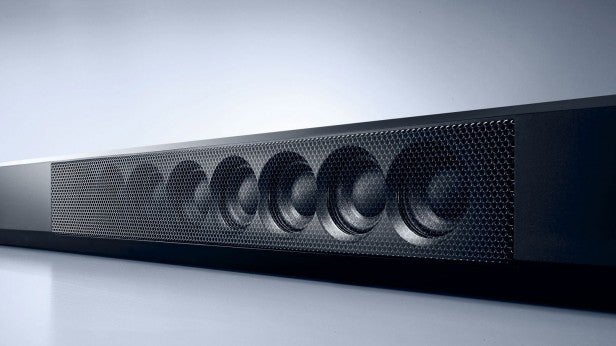 Yamaha’s Digital Sound Projector system shoots sound beams from eight speaker drivers on the front, which bounce off the walls to create an enveloping 5.1-channel soundstage. The beams are time- and direction-controlled using sophisticated digital signal processing – you can adjust how they behave using the remote control or the smartphone app.

They’re joined by dual 8.5cm upward-firing subs, each one receiving 30W from the digital amp. The beam drivers receive 2.5W each, adding up to a total power output of 80W.

The YSP-1600 makes up for its vague front display with a helpful on-screen setup menu on the HDMI output. Superimposed in the top-left of the screen, it covers every aspect of the Yamaha’s functionality, including sound adjustments and network setup. It looks basic, but works well.

You can adjust the individual volume for each channel, with test tones helping to find the right level. You can also set an audio delay to correct lip-sync problems.

The YSP-1600’s remote feels plasticky, but decent button layout and clear labelling make it easy to use. It’s compact enough to sit snugly in the palm of your hand. The keys are separated into sensible sections, with dedicated buttons providing direct access to inputs and sound modes. 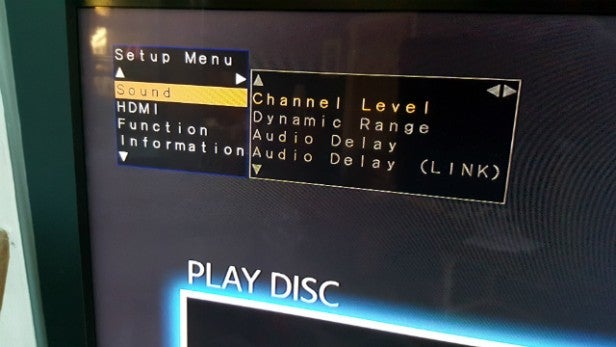 It’s easy to tailor the sound to your room. Three buttons change the sound beams depending on the YSP-1600’s proximity to the walls – nearer to the left/ right, or bang in the centre. There are dedicated subwoofer volume controls too.

The MusicCast app is right up there with the best. It’s remarkably fast and isn’t flustered by large music libraries. The layout is simple and friendly, refusing to go overboard with fancy visuals. Most of the pages are white on black, livened up by colourful cover art.

It’s basically split into three sections. The Rooms menu lets you group various speakers together using the “Link” icon; the browsing home page displays available sources as large tiles; while the “now playing” screen offers playback, volume and Cinema DSP controls. The only gripe is that you have to hold down the track-skip icon to scan through a song. 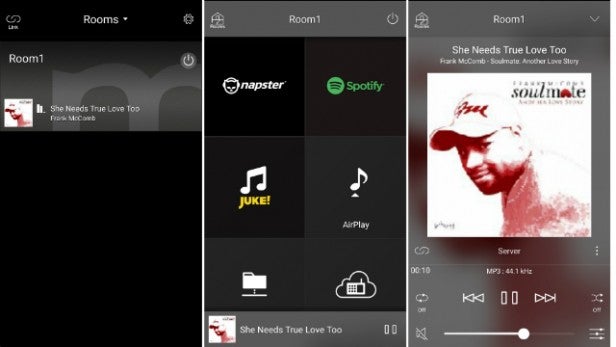 The YSP-1600 is an impressive performer, generating a big, immersive soundstage with weighty bass and clear detail.

With balance and fluidity across the frequency range and terrific sub/speaker integration, the sound is focused and cohesive. It’s a wonderfully entertaining listen.

Watch the bonkers church massacre scene in Kingsman: The Secret Service, and as Colin Firth takes out the congregation to “Free Bird” by Lynyrd Skynyrd, the track’s guitar riffs and pounding drums have power and presence.

Other fight scenes are handled with gusto. As punches are thrown and scenery shatters, the effects are crisp and forceful. There’s enough bite to keep you engaged, but it never lapses into hardness – even when you crank up the volume. 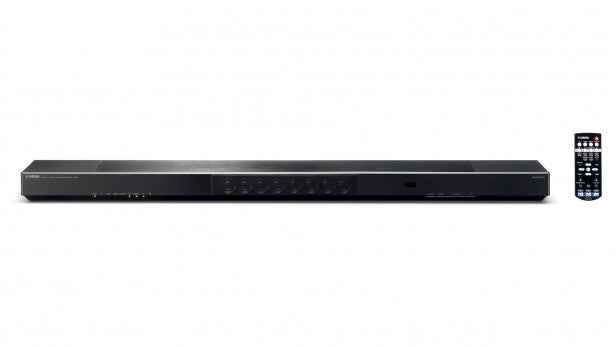 It isn’t as snappy or exciting as the Samsung HW-K450, but the Yamaha’s smoother approach means you can listen at loud volumes for longer without getting fatigued.

Treble is a little thinner and less refined than I’d like, but stellar support from the robust mid-range and bass means it rarely gets exposed. It lacks the sparkle and insight of, say, the Q Acoustics M4, struggling to imbue dialogue with the same nuance or subtlety.

But when it comes to surround performance, the YSP-1600 leaves the competition standing. It pretty much delivers on its promise of true 5.1 sound, with a convincing sense of width and clear separation of effects. Admittedly, placement isn’t as precise or clear-cut as a real 5.1 system, but it comes a darn sight closer than most soundbars.

For example, after Eggsy smashes through the two-way mirror, the sound of water trickling from the ceiling genuinely felt like it was raining down around me. How well it works depends on room layout and location, but even in less-than-ideal surroundings you get a good sense of envelopment. 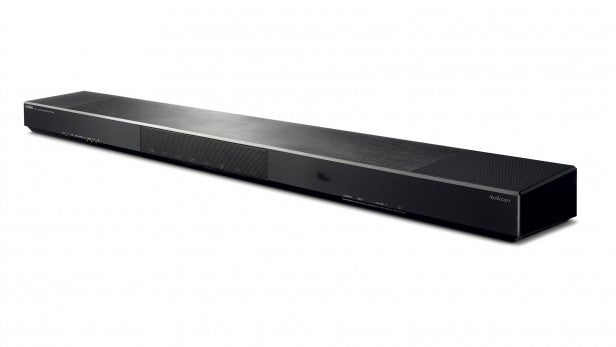 The beam drivers may get the plaudits, but the YSP-1600’s secret weapons are its subwoofers. They deliver quick, well-controlled and powerful bass, which makes all the difference when getting stuck into a large-scale action scene.

Gunshots sound tight and punchy, the snap fuses seamlessly with an accurate burst of bass – one of the benefits of having the subwoofers in such close quarters. Some external soundbar subwoofers are tricky to place and integrate, but that isn’t the case here.

Having a play with the Cinema DSP modes, “Movie” works well with films, which may sound obvious but isn’t always the case. Its well-judged EQ allows voices to remain clear over the cacophony while layering in plenty of bass.

Not all modes are best suited to their nominal material, though – “Music” mode adds a subtle, unnatural echo and does little to enhance the clarity of vocals and instruments. Stick with “Stereo” mode and the YSP-1600 is a decent music player.

Its smooth balance ensures no particular frequency stands out, while agile bass bolsters basslines and kick drums. Again, I’ve heard soundbars with greater finesse and bigger dynamics, but the Yamaha does a fine job.

When it first launched, the YSP-1600 sold for £500 – which would have tempered my enthusiasm slightly. But since then it’s has dropped to a much more reasonable £350, and at that price you’d be a fool not to give it a chance.

First and foremost it’s a delightful performer, offering a huge soundstage and bags of power. Effects are forcefully delivered, there’s plenty of detail in the mix, and the built-in subs deliver taut, weighty bass.

But the pièce de résistance is surround sound – the eight beam drivers skilfully send effects to the right areas, creating a wide, immersive soundfield. In terms of mimicking a real 5.1 soundstage, it’s head-and-shoulders above the competition.

What really seals the deal, however, is the YSP-1600’s feature list. With multiroom music streaming, Bluetooth, AirPlay and plenty of connections, you certainly won’t be stuck for stuff to listen to. Yes, it’ isn’t pretty, and the front display needs work, but on the whole the YSP-1600 is an impressive package.