Picture the scene: you’ve just bought yourself a Blu-ray player, but the scrawny sound offered by your TV speakers just doesn’t cut the mustard for movies. Trouble is, you don’t have room to accommodate a full 5.1-channel speaker system and you’re under strict instructions to keep clutter to a minimum. What do you do? Check out the Yamaha YHT-S400, that’s what…


You see, those considerate bods at Yamaha have come up with a clever home cinema package that not only solves the above problem but also avoids the sound quality compromises that sometimes have to be made when cramming everything into a single soundbar. 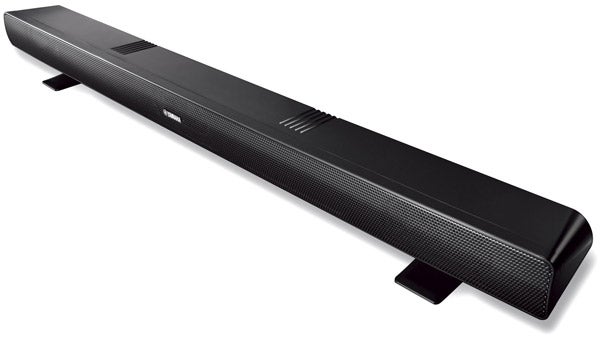 Confused? Allow us to explain. The YHT-S400 is made up of two components – the NS-BR300 passive front speaker system (coincidentally the slimmest soundbar in the world at just 50mm high) and the SR-300, a separate AV receiver that boasts an integrated subwoofer. We often moan that passive soundbars (like the Monitor Audio Radius HD and KEF KHT8005 require an AV receiver to drive them, making them much less convenient than the integrated variety, but this package offers the best of both worlds.


The soundbar, which houses the front L/R and centre speakers, sits on top of an AV stand in front of the TV (it’s designed to match sets from 32in up to 50in), while the receiver can be tucked into your AV rack and provides 3 x 50W of amplification, audio decoding and a bevy of sockets for your kit. 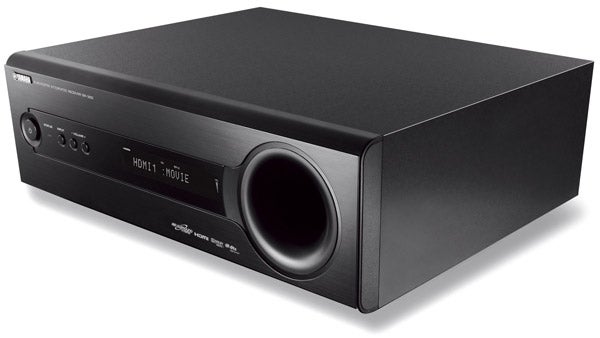 The NS-BR300 can be mounted in a variety of ways: attach the supplied feet and place it on a TV stand, mount it on the wall or attach it with your TV to one of Yamaha’s optional stands – the YTS-T500 pedestal stand or the YTS-F500 floor stand, both of which support TVs up to 45kg in weight.


Ostensibly just a long black block, the soundbar isn’t much to look at, but that’s not the point – its goal is to blend in discreetly with your TV and boost sound quality invisibly, hence the ultra-slim dimensions. Although build quality is generally robust, it’s a shame Yamaha opted for three sets of springclips on the back instead of binding posts.


The SR-300 might seem like an odd beast, but it’s actually a clever space-saving idea. It looks like a regular AV receiver, except for the appearance of a huge port in the front panel. Also on the fascia is a large display showing the current source and sound mode, plus power, input and volume buttons on the left. It’s styled in Yamaha’s traditional mean ‘n’ moody black finish.

We were expecting a veritable telephone exchange of sockets on the back panel, but the selection is surprisingly stripped down. It caters mainly for the needs of this system and doesn’t spare a great deal of thought for future expansion, but Yamaha probably wanted to keep things simple and in any case, there’s more than enough to start you off.


Most importantly, you get three 1080p-capable HDMI inputs and one output, letting you switch between your various hi-def sources, plus optical digital and analogue stereo audio inputs. The front and centre springclip speaker terminals are found here, and in the box you’ll find a single speaker cable that combines the left, right and centre cables, with colour-coded strips on each section. It’s just a shame Yamaha didn’t include extra speaker terminals for those that may want to add rear speakers in the future.

It’s also worth mentioning that you can play music from iPods and Bluetooth devices through the YHT-S400 using the optional YDS-11 iPod dock and YBA-10 Bluetooth wireless audio receiver.


Yamaha has always been an audio pioneer and as such has loaded the system with a plethora of sound modes to enhance your listening pleasure. The key feature for this system is Air Surround Xtreme, a ‘virtual surround’ mode that aims to replicate the experience of real rear speakers. Yamaha claims its system allows you to distinctly identify sounds behind you, as well as enjoy clear separation between the front and centre channels. Given that it was one of the first companies to dabble in ‘front projection’ technology, we’re inclined to believe them – but let’s reserve judgement for now.


Among the other audio tech is the Compressed Music Enhancer for boosting the quality of MP3/WMA playback and Extended Stereo, a new technology that makes it sound as though the front speakers are much wider apart than they really are (two metres apart, in fact). Completing this impressive array is UniVolume, which maintains a consistent listening level no matter how intrusive the adverts get. 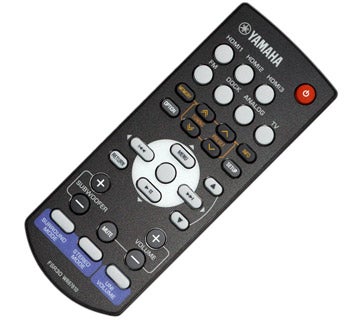 Although the SR-300 can decode Dolby Digital and DTS signals, it can’t decode Dolby TrueHD and DTS HD Master Audio, which means you’ll need a Blu-ray player that can output these HD audio formats as a linear PCM stream via HDMI – luckily most current Blu-ray decks offer this feature.


Despite the lack of an onscreen setup menu, it’s easy to make those all-important audio adjustments. Hit the Setup button on the remote and a menu appears on the receiver’s front display panel. You can set the levels of the centre, surround, front and subwoofer channels, adjust the bass, treble and delay and configure the HDMI sockets. The remote is smaller than most receiver handsets but decent button placement makes it comfortable to use. Particularly useful are the dedicated keys to activate the various sound modes and the separate subwoofer volume controls.

After tweaking the levels to taste, we fed ”Terminator Salvation” into the Blu-ray deck (connected via HDMI to the receiver) and the movie’s decoded DTS HD Master Audio track sounds thrilling.


As soon as it starts hammering out the iconic industrial percussion of the movie’s title sequence, the Yamaha demonstrates the upfront, brutal dynamics for which its amps are famous. When the action kicks in, the drive and aggression left us transfixed, nowhere more so than the scene where Marcus and Kyle are attacked on the bridge in chapter 7.


Roaring jet planes, rattling gunfire and explosions are forceful and edgy, but there’s none of the distortion or brightness at the top-end that so often spoils an otherwise decent performance. Effects dart swiftly between the front channels, and the use of identical speakers in the soundbar ensures a uniform tone across the front soundstage. What’s more, separation is clear and there’s detail by the bucketload.

But it’s not just loud, frenzied scenes that impress – during calmer passages, dialogue is clear through the centre channel (even Christian Bale’s gruff mumbling) and Danny Elfman’s score is suitably rich and atmospheric.


The subwoofer fuses nicely with the front speakers, but it could do with a little more punch and definition – some of the bass work is a bit flabby. And although we won’t pretend that the soundbar’s surround performance is any sort of match for real rear speakers, it’s certainly a cut above most virtual surround modes.


As Marcus and Blair talk in the pouring rain towards the end of chapter 7, the effects sound like they’re coming from a much wider position than the actual speakers, but it certainly doesn’t sound like rain is falling behind you.


It’s worth mentioning that certain room sizes and layouts will garner better results, but it’s this level of uncertainly that’s the main problem. This goes with the territory when buying a soundbar, and in any case you’ll probably be too dazzled by the excellent sound performance elsewhere to worry too much.


The YHT-S400 is a real problem-solver for people who can’t afford or accommodate a full home cinema system, and the superb performance shows that you don’t have to compromise on sound quality just because space is tight.


On the downside, the hit-and-miss surround effects deny you the classic home cinema experience, and it’s a shame you don’t get the option to add rear speakers, but on the whole the YHT-S400’s performance and convenience are to be applauded.