The YAS-105 is an entry-level soundbar that upgrades shabby TV sound quality while keeping clutter to a minimum. It’s the replacement for last year’s YAS-103, which aside from one or two sonic flaws was an impressive soundbar for the money.

This straightforward, single-body speaker lacks the sound-beam technology used by Yamaha’s superb YSP-2500, but with integrated subwoofers, virtual surround and 120W under the bonnet, it’s equipped to deliver powerful sound into your living room.

The YAS-105’s unobtrusive design and lack of external subwoofer make it the Holy Grail for clutterphobes. You can plonk it on a tabletop or fix it to the wall, with a switch on the bottom that optimises the sound for each position. When placed on a TV stand, the 53mm-high speaker won’t get in the way of your TV’s remote sensor, and when wall-mounted it won’t stick out like a sore thumb. It’s a win-win.

With its low-key black styling, the YAS-105 is born to blend in. The top and front of the speaker are mostly covered in black cloth, while the back-end is made from a mixture of gloss and matte plastic. The curved front-end and rear corners lend a touch of elegance, and at both ends of the soundbar are bass reflex ports with openings shaped like a trumpet bell to reduce air output noise.

Towards the back are some buttons – input, volume and standby – and a line of LEDs that light up to indicate the volume level and flash when you make adjustments. But therein lies a big design flaw: When mounted on a tabletop you can’t see the lights from the sofa, which is a problem when you want to check the subwoofer volume or see which sound modes are selected. This isn’t an issue when it’s mounted on the wall though, since the lights face forward.

Build quality is impressive. The bodywork feels heavy and robust when you pick it up, and the structure is reassuringly rigid.

On the back – or top, depending on its orientation – is a recess housing a modest array of sockets. These include optical and coaxial digital inputs, a 3.5mm mini-jack input and an output for an external subwoofer should you choose to add one. Built-in Bluetooth lets you stream music easily.

The lack of HDMI sockets underlines the Yamaha’s simple, hassle-free approach – just hook up your TV to the optical input and it’ll play whatever you’re watching. Or, you can connect a Blu-ray deck to the coaxial input and take advantage of its on-board Dolby Digital decoding.

The feature list pales in comparison to that of the YSP-2500, but there’s still plenty here to get your teeth into. First, let’s talk speakers: a pair of mid-range drivers is joined by two balance dome tweeters and two upward-firing subwoofers. On-board power is quoted as 120W – that’s 30W for each channel and 60W from the subwoofer. 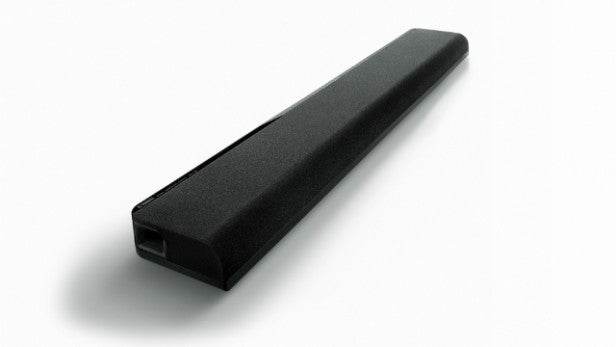 The YAS-105 is packed with proprietary audio technology. There’s the latest version of Air Surround Xtreme (their caps), the virtual surround mode that claims to offer a 7.1-channel listening experience.

It’s joined by Clear Voice, which boosts movie dialogue and TV speech without affecting the rest of the sound. Bass Extension gives low frequencies extra punch, plus there’s a range of DSP modes – Movie, Music, Sports, Game, TV Program for example. Oddly, these can only be accessed using Yamaha’s Home Theater Controller smartphone app, which we’ll come to in Operation.

As mentioned, the placement of the LEDs at the back of the unit makes operation tricky, forcing you to leave the comfort of your sofa to check what’s what. A decent text-based display on the front would have been a better option. In addition, you’re relying on your ears alone to gauge volume levels. However, in other areas the YAS-105 is easy to operate.

It comes with a small but well-designed remote that sits comfortably in the hand. All of the buttons are clearly labelled, and the inclusion of dedicated keys for sound modes and inputs is helpful. However, build quality could have been better. It’s a bit plasticky, and the volume controls could have been bigger – plus there’s no way of changing the DSP modes using this handset.

The Yamaha can be programmed to recognise volume commands from your existing TV remote. It’s easy to do and very worthwhile, since switching between my Sky remote and Yamaha’s zapper just to change volume was a real drag. 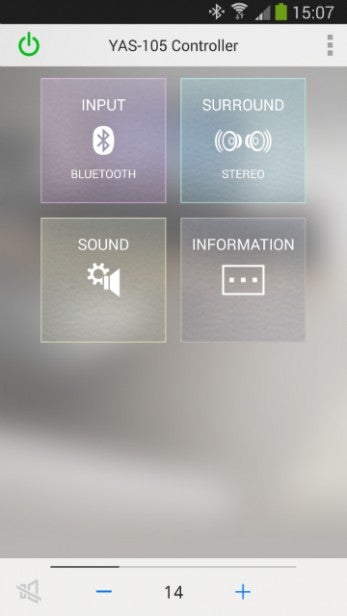 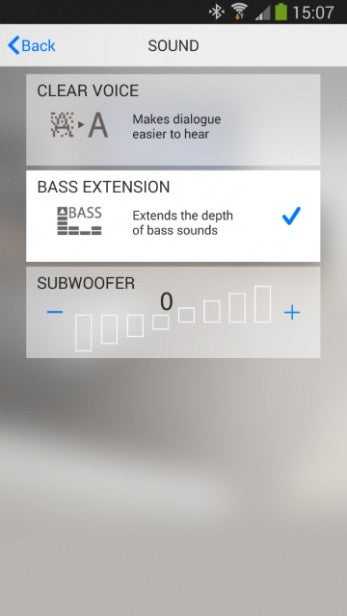 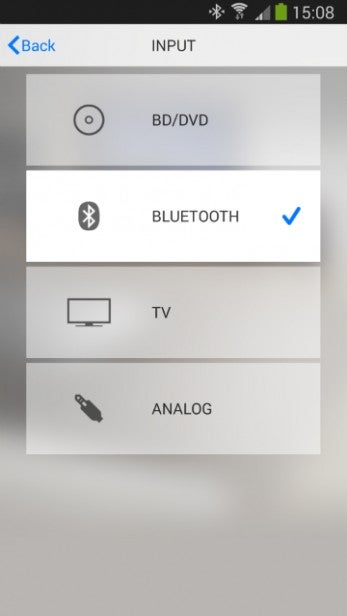 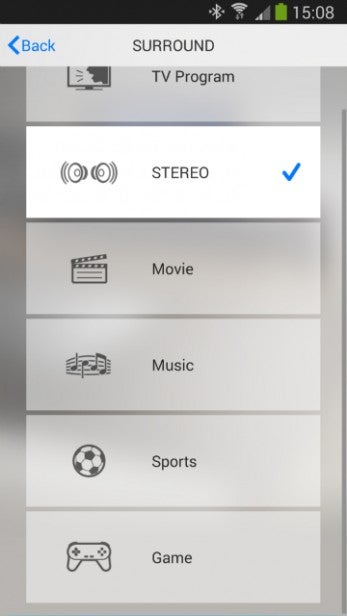 Alternatively, Yamaha’s Home Theater Controller smartphone app lets you adjust volume, switch inputs and activate the various sound modes. It works beautifully and the design is hugely attractive. My only gripe is that I couldn’t listen to a second Bluetooth device while my phone was paired with the soundbar.

The YAS-105 delivers a big, cohesive sound that will make any TV hang its head in shame, but a few shortcomings deny it soundbar greatness.

There are plenty of positives, though – not least a dynamic sonic signature that keeps excitement levels high when watching movies. With The Hobbit: The Desolation of Smaug on Blu-ray, it attacks the clanking swords and snarling Wargs with impressive vigour. There’s a crisp, lively feel as Smaug swoops around the cavern blasting fire.

It’s also a dab hand with dialogue, articulating the dwarves’ gruff tones clearly and keeping them audible as the dragon makes a racket inside Erebor’s echoey halls. This pays dividends when watching TV – newsreaders and game-show hosts’ voices are crystal clear, even cutting through the background chatter of a busy family living room.

The YAS-105’s integrated subs muster a decent amount of bass, but you’ll need to crank up the sub volume to make it sing. During action scenes it works really hard – you could dry your hands on the air coming out of the bass ports – but the results are satisfying.

A weighty rumble underpins the ominous score as Azog visits the Necromancer, and their booming voices have real presence. Later, Smaug’s voice sounds huge, with bucketloads of depth and a treacly rasp. If you’re upgrading from weedy TV speakers, the difference will be a revelation.

Admittedly, it doesn’t reach the deepest, lowest bass notes, but that can be rectified by adding an external sub – hats off to Yamaha for providing the option. It can also get boomy at times, but you can tame it by reducing the volume.

Of greater concern is the lack of finesse in the mid-range and treble, and the touch of hardness that creeps in at high volumes. Soundbars such as the Q Acoustics Media 4 and Yamaha’s own YSP-2500 offer a smoother listen overall, with greater detail and insight.

Finally, Air Surround Xtreme makes the soundstage wider and fuller, boosting the sense of immersion when viewing movies and TV shows – but to call it surround-sound is a bit of a stretch.

Music sounds neutral and well balanced through the YAS-105. Drums sound punchy thanks to the agile subs, provided you don’t push the volume too high. Vocals are clear and detailed. Again, it doesn’t sparkle like the best soundbars but for day-to-day music listening it does a good job.

If you want a simple, no-nonsense sound upgrade for your TV then the YAS-105 is a decent choice. Its hassle-free setup is a godsend for the technophobic – just plonk it in front of your set, plug in the optical cable and away you go.

I’m also a fan of its slim, dual-orientation design and solid build quality, which gives it the feel of a premium product despite its reasonable price tag. And for the most part its performance is impressive, sounding crisp and dynamic with plenty of bass. However, it lacks the sophistication and composure of rival soundbars – particularly when you crank up the volume.

With its space-saving design and punchy, dynamic sound, the YAS-105 is an admirable speaker upgrade – but it lacks the polish and poise to pair it with the best soundbars.