The SRT-1500 is the largest of Yamaha’s two soundbases, offering a step up in size and spec from the great value SRT-700. As such, it’s designed for bigger TVs (up to 40kg) and larger living rooms.

The key upgrade from the SRT-700 is the addition of Wi-Fi and MusicCast, which allows you to play music on multiple Yamaha devices in your home through a smartphone app. It’s also equipped with Yamaha’s Digital Sound Projector technology, which claims to offer true 5.1 sound.

Having been recently seduced by the Canton’s elegantly designed DM100, the SRT-1500’s styling is dreary by comparison. It’s by no means ugly – but the plastic trim, sloping edges and brushed vinyl top panel (as opposed to glass) lack the sophistication of its German counterpart. It’s available in black or silver, allowing you to choose the finish that best matches your TV.

My other complaint is the lack of front display panel. Instead, Yamaha provides a row of LEDs that light up when you select sound modes and inputs, or adjust the volume. It’s fine, but lacks the immediacy of a text-based display and it’s difficult to see from the sofa.

It is, however, a well-made soundbase with a robust MDF cabinet and a solid black aluminium mesh on the front. A row of buttons on the right-hand side lets you toggle through inputs, adjust the volume or connect the SRT-1500 to your MusicCast ecosystem.

There’s an impressive selection of sockets on the rear. The HDMI 2.0a input and output are ready for 4K 60p passthrough, HDCP 2.2 and 3D. You get a choice of optical and coaxial digital inputs and a 3.5mm mini-jack for your other portable gizmos.

Ethernet provides an alternative to the built-in Wi-Fi, and there’s a subwoofer output should you wish to give bass a boost. The connections are hidden under a removable cover that keeps things nice and tidy.

You can adjust these beams to get the optimum effect for your room layout, plus there are three settings for different room sizes and installation positions.

The beam drivers are joined by two 40 x 100mm woofers and dual 85mm subwoofers, taking the total driver count to 12. Total power output is 140W; each beam driver receives 2W of amplification, while the woofers get 30W each and the subs get 60W.

The SRT-1500 is also compatible with Yamaha’s MusicCast multiroom system, allowing you to play music on multiple speakers around the house. It offers a wide range of music sources – Spotify, Napster, Juke, web radio and DLNA – plus you can stream tracks via AirPlay and Bluetooth.

The SRT-1500 happily plays hi-res audio files such as FLAC, WAV and AIFF (up to 192kHz) and ALAC up to 96kHz. There’s Dolby Digital and DTS decoding too (but not TrueHD or DTS-HD Master Audio), plus five DSP modes (Movie, Music, Sports, Game, TV), a Clear Voice dialogue booster and Bluetooth output for headphone listening. 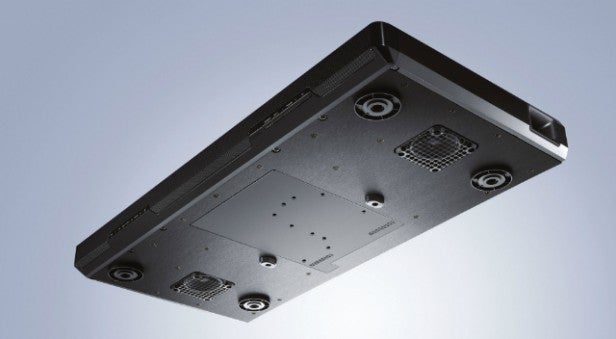 Aside from the aforementioned problems with the front display panel, the SRT-1500 is rather enjoyable to use. The compact ergonomic remote features nicely sized buttons, foolproof labelling and an uncluttered layout.

You can quickly change the beam settings using dedicated buttons at the bottom, while inputs and sound modes are also afforded their own buttons. Particularly useful are the subwoofer volume controls, given how often you might need to tweak the balance.

Unusually, there’s an onscreen menu on the HDMI output, which lets you tweak every aspect of the Yamaha’s functionality. It isn’t exactly sophisticated but proves easy to follow – and, to be honest, I’m impressed it has one at all.

The soundbase can also be controlled using Yamaha’s excellent MusicCast app – the same one that controls the WX-030 and ISX-80 speakers.

The white-on-black layout is simple, but what it lacks in visual panache it makes up for in sheer usability. You can easily organise multiple speakers using the “Rooms” menu and send music to them without fuss.

Finding music is also a cinch thanks to the app’s clear menu structure. It starts with a grid of tiles, each one containing a different source, as well as a Favourites section that lets you save up to 40 songs or 30 FM radio presets.

Exploring a NAS drive is a surprisingly slick process, thanks to the app’s ability to scroll through big libraries quickly. There is a search tool, but it only looks for songs on the phone itself.

When you’re playing a song, the app puts various options at your disposal. You can group speakers, save favourites, share songs to social media and adjust the EQ. 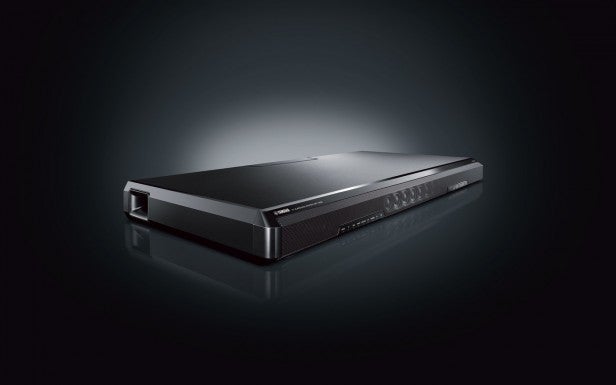 Fire up a movie and the SRT-1500’s big, powerful sound easily fills the room. You get a greater sense of scale than the SRT-700, not to mention added width and space thanks to the sound-beam technology.

Its presentation isn’t as subtle or finessed as the Canton DM100 or Geneva Model Cinema, but makes up for that with its sheer energy and high entertainment value.

It’s a vigorous, exciting listen, with enough attack in the mid-range to make action scenes really pop. For example, when Finn and Poe escape in a Tie Fighter during Star Wars: The Force Awakens, the blaster shots and explosions are snappy and forceful.

Later, when the same Tie Fighter is swallowed up in quicksand, the SRT-1500 expresses the huge metallic boom with great conviction.

Those dual subwoofers beneath do a great job at satisfying the movie’s serious bass demands. There’s a deep, menacing rumble as Starkiller Base blows Hosnian Prime to smithereens, while the enthralling lightsaber battle between Rey and Kylo is underpinned by tight, penetrating bass hits. It’s nice to have the option of adding an external subwoofer, but it isn’t necessary.

At the other end of the spectrum, the Yamaha’s crisp high-frequency reproduction gives the soundstage a pleasing sense of openness, although it lacks the silk and subtlety of the Geneva and Canton. The Yamaha can also sound a little spiky with the volume up loud, but it isn’t too detrimental.

The full, robust mid-range provides an even tonal balance, and dialogue is confidently projected. Snoke’s booming voice retains its authority and definition as it echoes within the cavernous chamber.

Spend some time experimenting with the sound-beam settings and the results can be impressive, but it’s heavily dependent on the layout of your room. You need walls on either side off which to bounce the beams, but furniture can block their trajectory and it doesn’t work when placed in a corner.

Sadly, my room’s layout didn’t afford me the true 5.1 experience. It did, however, provide a more impressive sense of immersion and width than most soundbases. Effects are projected beyond the physical width of the cabinet and there’s a good sense of movement and position.

Musically, the Yamaha does a decent job. It offers a crisp, well-balanced character with agile bass notes. It’s far from audiophile quality, but sounds terrific.

It may lack the sonic X factor of rivals in the same price bracket but the SRT-1500’s powerful, exciting performance and extensive features make it worth a punt.

The presence of MusicCast, AirPlay, Bluetooth and 4K passthrough help justify the price, while the 5.1 sound-beam system is a clever idea in theory but is too dependent on room layout to be a killer feature.

Yamaha’s bigger soundbase is packed with nifty features and fills your room with large-scale sound, but lacks the visual and sonic elegance of its rivals.