For those after a soundbar that’s compact and easy to use, then this Yamaha is a solid and affordable option. If you’re a soundbar with a bit more beef to its bass, then perhaps look elsewhere

New ground can only be broken once, of course, and ever since Yamaha served up the first soundbar designed to mimic a complete 5.1 surround-sound system the market has expanded in all directions. Want a soundbar that will imitate a complete Dolby Atmos object-based audio system? No problem – it’ll cost you, though.

As befits one of the globe’s leading soundbar manufacturers, Yamaha has a product of every type at every price-point. And after almost four years it’s decided to refresh its entry-level soundbars to reflect the current state of the home entertainment market.

So meet the SR-B20A. It’s nominally a replacement for Yamaha’s much-admired YAS-107, and it’s designed to up your movie and/or gaming experience without being complicated, expensive or unhelpfully large.

Of course, Yamaha’s not unique in these ambitions – we have already identified a couple of affordable soundbars that do sterling work. So, does the SR-B20A have what it takes to put Yamaha back in its position of pre-eminence?

There’s a lot to be said for discretion where products like this are concerned, and certainly the Yamaha SR-B20A doesn’t draw attention to itself. Apart from its base, where some small silicone feet and a couple of keyhole hanging-points hint at its positional flexibility, it’s covered in smoothly applied and flawlessly finished acoustic cloth. A couple of bass reflex ports at either end are the only design flourish on offer. 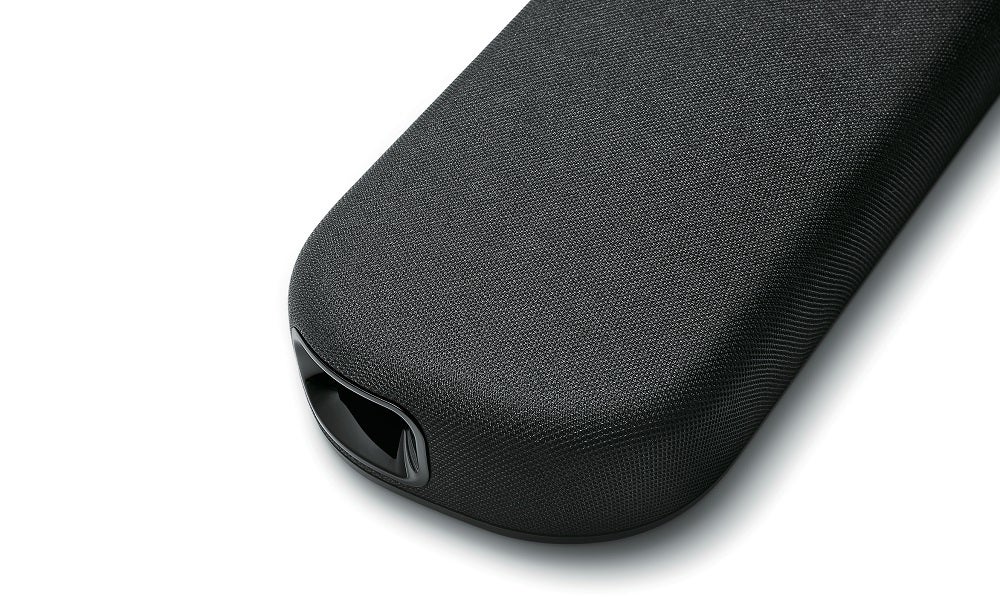 Standing on its little feet, the Yamaha’s a manageable 53 x 910 x 131mm (HWD) – certainly it’s not about to foul the bottom of your TV or monitor. And if your TV is wall-mounted, you can hang the SR-B20A beneath it. In either case, though, this is one of the most agreeable combinations of proportions, dimensions and basic versatility available in all of soundbar-land.

Yamaha SR-B20A features – DTS Virtual:X is supported to give the impression of immersive sound

The Yamaha is compatible with Dolby Audio, DTS Digital and, most significantly DTS Virtual:X – this format intends to mimic the DTS:X/Dolby Atmos object-based surround sound that’s the current state of the home cinema art.

So Yamaha has deployed the SR-B20A’s six drivers with the intention of giving some impression of ‘3D’ audio no matter how the soundbar itself is positioned. If it’s sitting on its feet, two 25mm tweeters face forwards while a pair of 55mm midrange drivers and a couple of 75mm bass drivers fire upwards from its top. Of course, if the SR-B20A is mounted on the wall, those tweeters are firing downwards while the other four drivers face forwards.

There’s a total of 120 watts of Class D amplification on board, with the two biggest drivers hogging a solid 50% of that output. Connectivity is available via Bluetooth 5.0 (handy if you want your soundbar to do music duty too), an HDMI ARC socket and a couple of digital optical inputs. There’s also a pre-out for a dedicated subwoofer, just in case two 75mm bass drivers powered by 30 watts each doesn’t sound quite potent enough for you.

There are a number of EQ presets available, and all are self-explanatory: Stereo, Standard, Movie and Game all do exactly what they say on the tin. The Clear Voice preset pushes the midrange (in general) and dialogue (in particular) forwards, which is useful when listening late at light and/or at lower volumes. And then there’s ‘3D surround’, which seeks to open up the soundstage and give a suggestion of immersive audio. 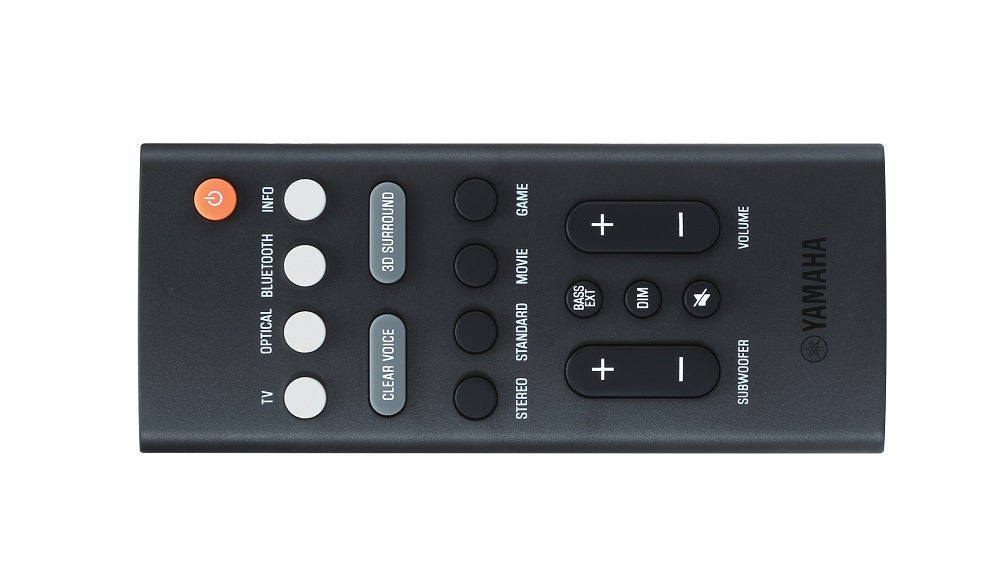 All these EQ presets are accessible via the small, cheap feeling but undeniably useful remote-control handset that’s included. They can also be accessed via the clear, stable and simple Sound Bar Remote control app that’s available for iOS And Android. Or if you’re more the ‘hands on’ type, there are some partially reliable touch-sensitive controls integrated into the modest display on the top (or front, depending) of the soundbar itself.

With the Yamaha connected to a fairly ordinary 4K HDR LED TV via HDMI, it doesn’t take long to establish that the SR-B20A is a far more expansive, hefty and assertive listen than the television when left to its own devices.

In terms of dynamism, there’s no doubt the Yamaha brings your audio experience into much closer alignment to your visual experience. It retains plenty of detail during the quieter, more tense moments, and it’s capable of quite prodigious attack when the going gets exciting. It wants for little where punch and drive are concerned and has just about enough subtlety to prevent being an entirely blunt instrument.

In fact, through the midrange it’s a notably deft and nuanced performer. Dialogue is given the necessary room and levels of detail to remain coherent and characterful, even if it’s in the midst of some real blockbuster bluster. And at the top of the frequency range the Yamaha has sufficient crunch and bite to make treble sounds substantial – there’s none of the zingy hardness that less capable soundbars sometimes deliver.

The bottom end, though, is a rather more qualified success. There’s no doubt the Yamaha has the sort of presence and forcefulness you’d expect from a soundbar delivering 60 watts of power through a pair of 75mm bass drivers, but there’s not much in the way of light and shade here. Bass sounds are not really plural – the SR-B20A delivers a bass sound, and it does so regardless of the on-screen circumstances. This lack of variation and expression can make bassier soundtracks a bit lumpy and flat-footed. 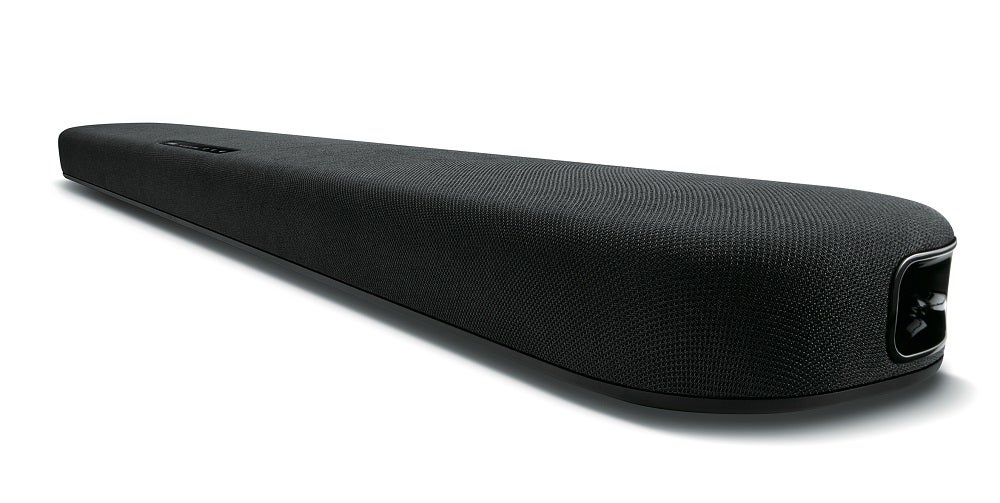 In terms of delivering a spread of sound, though, the Yamaha’s on much surer ground. At its most expansive, with ‘3D Surround’ engaged and a sympathetic soundtrack playing, the soundstage easily escapes the physical confines of the soundbar. It’s capable of generating an extremely wide, decently tall sound; delivering a far more immersive and enveloping experience than any mainstream TV can muster. Obviously you’re not about to confuse it for a (much more expensive) Dolby Atmos-enabled soundbar, but if you’re after an obvious improvement on the scale of your TV’s sound then the SR-B20A is just the ticket.

You should buy the Yamaha SR-B20A if…

The Yamaha does away with the need of a subwoofer – perhaps ill-advisedly – but it does mean that occupies less space in room for those after a convenient sound option for their TV.

As long as you can live with its rather ham-fisted low frequency reproduction – it’s one of the neatest and most capable soundbars £250 or so can buy.

You shouldn’t buy the Yamaha SR-B20A if…

We’re still admirers of Wharfedale’s Vista 200S, mind you. Its separate, wireless subwoofer is a fair bit more articulate in the lower frequencies than the Yamaha, too – it’s every bit as well made as the SR-B20A.

You should investigate the Polk Command Bar, too. It’s a refined listen (although not as forthright as the Yamaha) and it has Amazon Alexa voice-control too. Ultimate movie-night convenience, in other words.