It takes a brave AV receiver to enter the TrustedReviews Dragon’s Den so soon after the awe-inspiring Onkyo TX-SR608 has made its pitch, but Yamaha is no slouch in the AV receiver market and we’re expecting similarly good things from the 3D-ready RX-V467.

As per usual there’s a choice of black and silver finishes, and both are highly fetching. But don’t approach it expecting stark minimalism or esoteric elegance – the front panel of our black sample is a straight up tech-fest with a shining LED panel, exposed sockets, buttons dotted all over the place and a whacking great volume dial on the right-hand side.


The buttons include controls for the built-in radio tuner, input selection and four buttons linked to Yamaha’s convenient Scene feature. These work like macros, turning on the receiver and a connected component, selecting the right sound mode and starting playback all at the touch of a button. You can programme these to work with any input source and sound mode. Front-mounted socketry includes a headphone port, component/analogue stereo inputs, a minijack input for MP3 players and a socket for the YPAO auto calibration mic.

Rear connectivity is exactly what you’d expect at this price, covering most bases without pushing the boat out. You get four HDMI inputs – all of which are V1.4 and therefore support 3D signals and the Audio Return Channel feature – and one output. Because this is a 5.1-channel receiver, there are just five pairs of binding posts (banana plug compatible) and a single subwoofer pre-out.


Also on the back are two sets of component video inputs, four composite video inputs, four analogue stereo inputs and four digital audio inputs (two optical, two coaxial). Outputs include component video, two composite video, stereo audio and pre-outs for surround back channels that let you upgrade to a 7.1-channel setup. The RX-V467 will also support Yamaha’s optional wireless Bluetooth receiver (YBA-10) and universal iPod docks (YDS-12 or YDS-11) – a port for these is also included on the back.

3D compatibility is clearly the headline feature, but the rest is fairly modest. As mentioned, it can decode Dolby TrueHD, DTS HD Master Audio, Dolby Digital Plus and DTS HD bitstreams via HDMI and there are no less than 17 digital signal processing (DSP) modes that adapt the sound to suit different types of material. 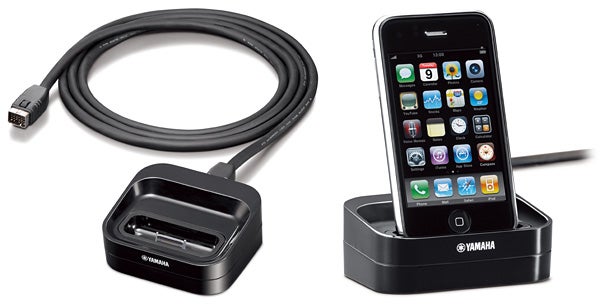 They’re helpfully split into movie and music (with separate buttons on the remote) and come with names like ‘Spectacle’, ‘Sci-Fi’ and even ‘Role-playing Game’. On the music side they get even more weird and wonderful, with names like ‘The Bottom Line’, ‘The Roxy Theater’ and ‘Hall In Munich’. We’re not entirely sure if they accurately replicate their intended venues, but the DSP technology behind them is certainly effective. You can alter the parameters for each one using the setup menu.


Power output is quoted as 5 x 120W, with Burr Brown 192kHz/24-bit digital-to-analogue converters for all channels. The Direct Mode switches off any unnecessary circuitry and processing for the cleanest sound quality, while the ability to switch between HDMI inputs while in standby will come in handy.


Another key feature is the aforementioned YPAO automatic sound optimisation mode, which makes audio setup an absolute breeze. Simply connect the supplied microphone, hit enter and the receiver runs through a sequence of test tones, which are picked up by the mic and measured to calculate the optimum sound settings for the room. Users with a bit of sonic savvy who don’t trust the results can tweak the levels manually, but beginners will appreciate having this tricky task taken out of their hands.


In fact, first-timers won’t have much trouble using the RX-V467, although its user-friendliness would have been boosted considerably by the inclusion of an on-screen user interface – as it stands, you have to set everything up using the front panel display. Thankfully, the large illuminated lettering and sensible sequencing allows you to find the relevant options without a great deal of confusion. 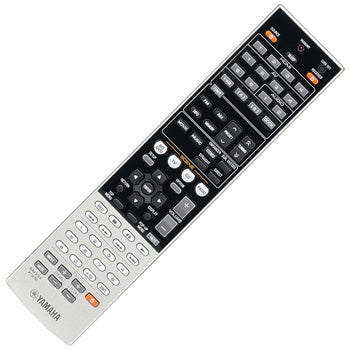 It’s a bit of a shame, then, that the remote is so fiddly to use. Most of the buttons are microscopic in size, and anyone with a thumb wider than a pencil might start mashing up the keys like Bernard Manning on a mobile phone.


Still, at least the layout’s fairly good, with conveniently placed menu navigation controls, large volume keys and clear labelling for all buttons, despite their size. Each input has its own button at the top and four dedicated Scene buttons (labelled BD, TV, CD and Radio) provide instant access to those macro-style functions. The zapper can also be used to change channels and volume on your TV.

Onto sound quality and the RX-V467 is a gifted performer for the money. Obviously it’s not in the same league as the pricier Onkyo TX-SR608, lacking the same smoothness and authority, but it still enthrals and entertains with an effortlessness that comes with decades of home cinema expertise.


Skip to ”Children Of Men’s” incredible finale in the Bexhill refugee camp and the Yamaha orchestrates the action brilliantly. Gunshots pop from the rear channels with amazing clarity and faultless placement, while the screaming voices and scattering rubble sound alarmingly real. The soundstage is open and expansive, conveying a sense of position and distance that makes you feel surrounded. All the while the score’s haunting, atmospheric choral voices drift across the soundstage. Superb stuff.

Performance across the front channels is also pleasing. Machine gun bullets fire forth with plenty of bite, while voice reproduction is terrific – the sound of the baby crying as Theo and Kee make their way through the Army soldiers is crystal clear. It may not dig out the very last scintilla of detail or sparkle in the same way as the Onkyo but it’s enjoyable nonetheless.


When a bomb blows open the entrance to the tower block, the explosion makes a sudden and powerful impact. Not the terrifying, full-bodied room shaker you get from some other receivers, but there’s enough weight behind it to raise the pulse by a few BPM.


Switching over to ”Avatar”, its reproduction of the Battle For Pandora scene is suitably dynamic and expansive, although the sound is noticeably sharper and terser than the Onkyo, which doesn’t always make for an easy listen, particularly when marines are blasting at Na’vis with the volume cranked up high.


However, we love the Yamaha’s music performance – slick and punchy with good top-end detail, excellent timing and nimble, bouncy low-end frequencies. Q-Tip’s ”The Renaissance” on CD is a flurry of head-nodding hip-hop beats, clean vocals and hefty bass.


All in all, the RX-V467 is a very likeable receiver with enough sonic talent to make both movies and music sound great. Although it doesn’t push the boat out with features, the inclusion of four 3D-ready HDMIs, auto calibration and HD audio decoding should be enough to satisfy most people’s needs, particularly at this sort of price.