We review our fair share of high-end receivers and speakers here at TrustedReviews, but Yamaha is here to remind everyone that putting together a separates system needn’t be hugely expensive. We recently looked at the company’s NS-P20 speaker package, which delivers decent sound for just over £100, and now we’re testing the budget AV receiver designed to drive it – the RX-V371.

This unassuming five-channel AV hub may not have the same mind-boggling feature list as the latest network-enabled Onkyos, Denons and pricier Yamahas, but that’s reflected in the bargain basement price tag. And, crucially, it carries out all the essential audio duties, such as decoding Blu-ray audio formats and passing the pictures to your TV, including those of the 3D persuasion.

The look is vintage Yamaha – harsh, angled lines, a black-as-night finish and a bright dot matrix display panel. It’s sleek, compact, robustly built and screams ‘hi-tech’, although it lacks the elegance of a Denon and fans of minimal styling might be put off by all the buttons peppered around the lower half of the fascia. You’ll find composite and analogue stereo inputs on the front, which can be hidden with a dust cover, but sadly no USB or HDMI ports for transient media playback. Minijack ports are supplied for the setup mic and portable music devices though, and the large volume dial is unmissable.

On the back are four HDMI v1.4 inputs plus a single output. A set of component outputs and two composite outs are also provided, alongside three composite inputs and two sets of component inputs. There are plenty of analogue stereo sockets too (three in, two out), while digital audio is catered for by two optical and two coaxial ports.

Elsewhere there’s a subwoofer pre-out, radio antenna inputs and a ‘Dock’ connector for peripheral Yamaha devices, which can be added at extra cost. These include the YDS-12 iPod dock and the YBA-10 Bluetooth (A2DP) audio receiver.

Not bad then, but designed very much with simplicity in mind. Some may lament the lack of multichannel analogue inputs and extra zone outputs for multi-room use, but at this price sacrifices have to be made. The inclusion of springclip terminals for the centre and surround speakers is disappointing though, as the small openings force you to use thinner cables than you might have wanted.

If you have designs on 3D, the Yamaha RX-V371’s HDMI ports will allow you to pass full HD pictures from a Blu-ray deck to your 3D TV, decoding HD audio along the way. As mentioned, the RX-V371 is capable of decoding Dolby True HD and DTS HD Master Audio soundtracks piped in from a Blu-ray deck, as well as DTS HD and Dolby Digital Plus – although it’s a five-channel receiver so obviously 7.1 material is off the agenda.

Power-wise, there’s 5 x 100W under the bonnet, which is plenty powerful enough for modestly-sized living rooms. Digital-to-analogue audio conversion is handled by 192kHz/24-bit Burr Brown chips and true to form Yamaha has provided more sound processing modes than you’ll probably ever need (17 in all) under the CINEMA DSP umbrella.

Modes in the Movie category have exciting sounding names like Spectacle, Sci-Fi, Adventure, Drama and Action Game, while a group of music-oriented modes transport you to such salubrious (and oddly specific) surroundings as a Hall in Munich, LA’s Roxy Theatre rock venue and New York’s The Bottom Line jazz club.

There’s a Compressed Music Enhancer too, which spruces up sounds from MP3 players and iPods, while Virtual CINEMA DSP and SILENT CINEMA are the obligatory pseudo surround modes, the latter offering a surround effect through headphones. You can playback music from Bluetooth devices with the optional YBA-10 receiver, or from iPods/iPhones with the YDS-12 dock. 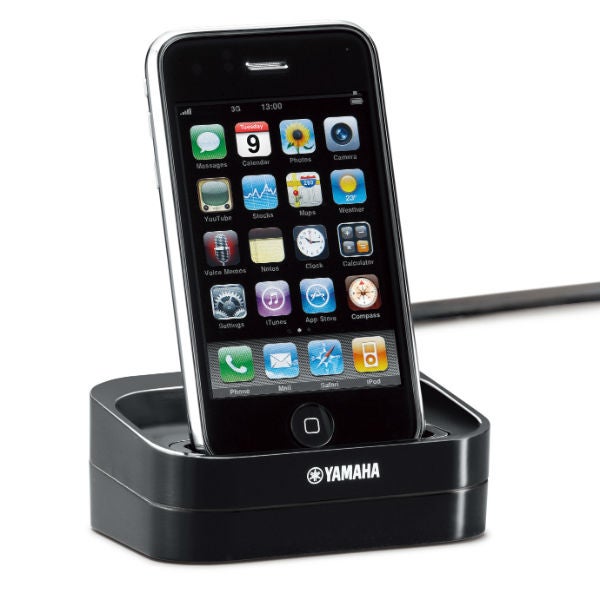 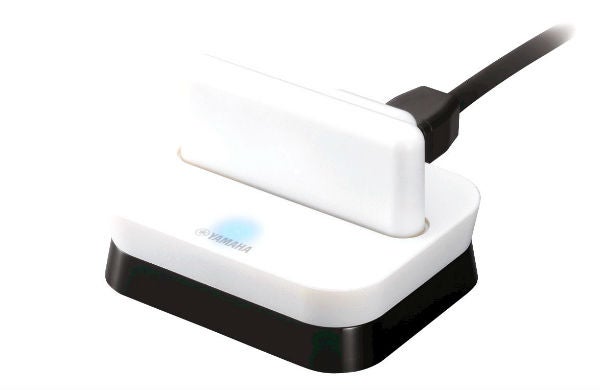 When it comes to setup, all of the adjustments have to be made using the front display panel. But the lack of a GUI doesn’t impact on the RX-V371’s ease of use as greatly as you might expect – weirdly, operation is still a hassle-free experience.

Sure, the front display panel is harder to see than an onscreen display, but that it’s big enough to display full words means you don’t have to decipher cryptic abbreviations the whole time, while the logical submenu sequences and fast reactions provide a level of intuitiveness that even some onscreen menus can’t match.

The Speaker Setup section offers level and distance settings, as well as an equaliser and test tone. But you can steer clear of all manual settings if you prefer thanks to the built-in YPAO (Yamaha Parametric room Acoustic Optimizer) technology, which does all the hard work for you.

With a microphone plugged into the front panel, YPAO plays test tones, measures the results and uses the information to set the appropriate size, distance and volume level for each speaker. It’s an increasingly common feature among AV receivers but always pleasing to find it at this price, particularly as most of its target audience won’t have a clue about sound calibration. What’s more it’s fairly quick and we couldn’t really argue with the settings it came up with.

The supplied remote won’t set your coffee table alight with its dreary black design, and in an ideal world the buttons and lettering would be bigger. But its convenient placement of the menu and volume controls is a bonus, and the Scene buttons are an intelligent touch – these act like macros, turning on the power and switching to a particular input with a single press.

Feed the RX-V371 a movie on Blu-ray – in this case Star Wars – and it conjures up a fast, exciting sound that’s sure to satisfy home cinema newcomers, although it lacks the majesty and smoothness of rivals like the Onkyo TX-NR609.

There’s plenty of stuff to admire though. The RX-V371 excavates lots of sonic detail from the disc’s stunning DTS HD Master Audio mix, presenting subtle noises and background ambience in a clear, audible manner and not allowing the other sonic elements to interfere. That goes for the centre channel too, which lends voices surprising texture and clarity.

It’s also adept at steering effects between speakers, meaning that Star Wars’s Star Destroyer moves from back to front in a smooth, seamless manner. It’s equally breathtaking when faster Tie Fighters whizz between channels – the speed and timing is impeccable.

Also impressive is the balance and cohesion the Yamaha brings to the table. Bass crossover between our speakers and sub was expertly managed, fusing everything together in a unified whole, but without sounding cluttered or confused.

On the downside, there is a slight edge to high-frequencies when pushed that hints at the unit’s budget nature. Clashing lightsabers and exploding spaceships weren’t as smooth or tightly controlled as we’d like, resulting in an occasionally uncomfortable listen.

And musically the RX-V371 is good rather than great. Songs are nicely balanced, with healthy mids and clean highs, plus individual elements well separated and allowed to shine within the mix, yet there isn’t enough detail to really sparkle in the way the best receivers do. But that’s hardly likely to deter or surprise listeners who have only splashed out £200 or so for their AV receiver.

With its unspectacular spec sheet, the RX-V371 is a budget offering through and through, unlikely to attract the attention of home cinema enthusiasts. It lacks bells and whistles like USB ports, onscreen setup, networking and Dolby Pro Logic IIz – if that’s what you’re after, look higher up the range or check out Onkyo TX-NR609. The springclip terminals on the back are also disappointing.

However, what the Yamaha RX-V371 does offer is a generous array of connections, 3D support, auto calibration and a wealth of sound processing tech – all of which should be more than enough to satisfy beginners. It masterfully decodes HD audio tracks too, providing loud, engaging sound quality despite being hamstrung in places by its budget origins. But if a few jarring high frequencies are an acceptable sacrifice at this price, then file the RX-V371 under ‘bargain’.