The RX-V367 may be the entry-level model in Yamaha’s latest line-up (sitting just below the impressive RX-V467) but despite its bargain basement price tag it’s equipped to handle 3D signals. This surprising discovery means that you can bag yourself a futureproofed audio hub and still have enough cash left over to buy all of those 3D Blu-ray movies currently flooding onto the market. Er… or maybe you could just stick it in the piggy bank until they arrive. But seriously, finding an AV receiver equipped with a healthy number of HDMI v1.4 inputs at this price is not to be sniffed at, but it’ll count for nothing if its other features and performance aren’t up to scratch.

On the aesthetic front, the RX-V367 is a pleasant-looking unit that’s available in black, titanium and silver. Our black sample is sleek and unimposing; the sort of neutral styling that won’t look out of place next to your other black AV components.


The front panel is fairly busy, with a bevy of buttons and sockets on the lower half and a large, easy to read display panel on the top half. Among the buttons are input selection keys as opposed to a dial, which let you toggle through connected sources, plus tone control and a button marked ‘Straight’, which disappointingly doesn’t control the unit’s sexual preference but actually allows you to bypass its many enhanced listening modes. You also get four keys for Yamaha’s Scene feature, which allow you to carry out a series of commands at the touch of a button, just like a macro.

Among the front connections are composite video and analogue stereo inputs, a headphones jack and a minijack input for MP3 players and other audio devices. On the back, the socketry selection is slightly less generous than the RX-V467 but not by much. Like its bigger brother the V367 offers four HDMI v1.4 inputs and one output, plus two sets of component inputs, but you get three composite video inputs as opposed to the V467’s four. Yamaha hasn’t skimped on audio sockets, offering three analogue stereo inputs (and two outputs), four digital inputs (two optical, two coaxial) and a subwoofer pre-out.


However there are some significant differences – the RX-V367 lacks a connection for Yamaha’s iPod and Bluetooth universal adapters, as well as the surround back pre-outs found on the V467. The least welcome downgrade is the inclusion of springclip speaker terminals for the centre and surrounds, leaving binding posts for the front pair only. It took ages to feed our fat speaker cables into the tiny springclip holes and once connected they didn’t offer the sort of secure, roust connection we hoped for. These cutbacks are inevitable for the money but are the sort of thing that might just tempt you to splash out a little more for the step-up model.

Moving onto the feature list, there’s a decent amount to get your teeth into, but our attention is immediately drawn to the lack of on-board HD audio decoding. When you send it a Dolby True HD, Dolby Digital Plus or DTS HD Master Audio bitstream via HDMI it’ll extract the Dolby Digital or DTS 5.1 core. If you want to savour the delights of hi-res sound, you’ll need to set your Blu-ray player to decode HD audio into PCM, thankfully something that most of them can do. Normally we could have accepted this as part and parcel of its budget price tag, but unfortunately for Yamaha Onkyo’s entry-level TX-SR308 features HD audio decoding for a similar price.

It does, however, come with a vast array of sound modes. There are no less than 17 DSP programs that tweak the sound characteristics to suit different types of movie content, such as Spectacle, Adventure, Drama, Sci-Fi and Sports, while for music you get exotic sounding settings like Hall in Vienna, Cellar Club and The Roxy Theater. These are backed up by Dolby Pro Logic II processing, which as ever is very useful for expanding stereo content to fill the 5.1 soundstage, while Compressed Music Enhancer improves music playback from MP3 players and Silent Cinema optimises sound for headphone playback.


Apart from the fiddly speaker cable connections, setting up the RX-V367 is a cinch. Like most AV receivers these days, it’s equipped with an automatic calibration system that equalises the sound to suit the acoustics of your room. It does so using a supplied microphone that plugs into a dedicated port on the front panel, which picks up test tones from the speakers and sets the distances, delays, volumes and even gauges the sound pressure level. It’s a quick and painless process and offers peace of mind to those who aren’t confident setting the levels themselves. 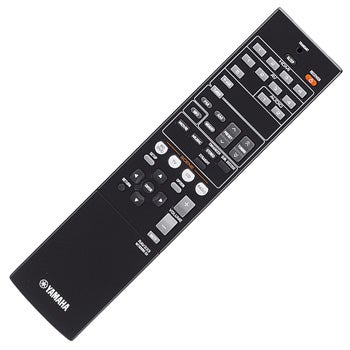 Day-to-day operation is equally simple. There are no onscreen menus, but that doesn’t matter when the front display panel is as clear and logically laid out as this one. It’s large enough to fit most words in full so you don’t have to decipher cryptic abbreviations, while all the sections are sensibly grouped together – speaker setup, sound setup, DSP parameters and so forth. It also provides a decent amount of control over its various functions too. You can rename and reassign inputs, set the sound parameters manually and control the HDMI settings, among many other things.


Add to this a remarkably straightforward remote, which sports a surprisingly minimal amount of buttons for an AV receiver handset. The menu controls and volume keys are ideally placed under the thumb and it’s easy to select inputs thanks to the dedicated bank of buttons at the top. Our only criticism is that a few of the buttons, like Setup, Mute and Return, are too small.

Fire up the RX-V367 and it’s a surprisingly feisty little performer, able to deliver drama and excitement in spades. With Iron Man on Blu-ray (decoded into PCM beforehand by our Samsung deck) the Yamaha digs up a healthy amount of detail, offers perky top-end frequencies and underpins the action with muscular bass tones. Sometimes the sound is a little bright at loud volumes, lacking the extra poise afforded by the RX-V467, but at this price it would be churlish to complain.

During the climactic showdown between Tony and Obadiah, the soundstage is breathtakingly busy and expansive, with beautifully steered and precisely-placed effects – at times it’s hard to believe you’re listening to a sub-£200 receiver. The V367 demonstrates potency as it relays relentless machine gun fire and roaring jetpacks (there’s 5 x 120W under the bonnet), as well as admirable agility as the Iron Men stomp and clank their way around the soundstage.


Voices are convincingly reproduced with a dynamic, forthright tone that can cut through the busiest of scenes and there’s pleasing cohesion between the front, centre and subwoofer channels. This also lends itself well to music playback – Incognito’s latest CD Transatlantic RPM is a melting pot of buttery soul and jazz, which sounds suitably smooth and polished through the Yahama’s circuits. Snare drums snap, slap basses sound crisp and the wailing vocals have a pleasingly natural tone. It could probably do with a little more heft in the bass department but overall the RX-V367 is musically competent. We played around with the DSP modes, which are fun to experiment with, but anyone serious about their music will stick to Straight mode.


If you’re looking for an affordable AV receiver that’s ready for 3D if and when you decide to upgrade, then the RX-V367 is a decent bet. It’s easy to use, sound quality is admirable for such a budget-conscious machine and with so many audio tweaks on board – not to mention auto calibration – you’re sure to find a sound to suit. Some may take issue with the relatively low connections count and lack of HD audio decoding, but if you have a Blu-ray deck with the relevant decoding the latter isn’t a major issue. As a result, the RX-V367 deserves to be filed under ‘bargain’.