Finding space for a big, bulky receiver in your AV rack can be a bit of challenge, but Yamaha has a solution in the svelte shape of the RX-S601. This five-channel AV receiver squeezes everything into a box measuring just 111mm high, making it easy to slot into a narrow shelf. It’s the successor to the RX-S600, which we awarded 4/5 back in 2014.

Yamaha may have shrunk the dimensions, but not the spec – the RX-S601 boasts all the audio prowess and cutting-edge features you’d expect from a full-size AVR, including Wi-Fi music streaming, multiroom, UHD Blu-ray support and much more. 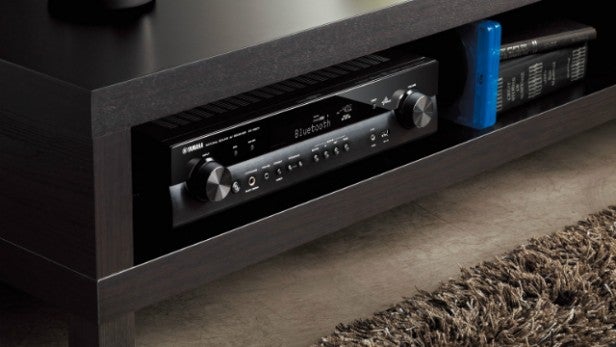 The RX-S601 comes in a choice of three colours: Black, Titanium and White. I was sent in the White version for review, which isn’t really my cup of tea, but it should look tasty next to other white components. The unit’s slender size might sound superficial but really boosts its visual appeal – it’s sleek, streamlined and far from imposing.

In terms of build, the aluminium top cover is firmly bolted and there’s a reassuring heft when you pick it up. It lacks that extra touch of luxury, but for the money there can be no complaints. Inside is a revamped ground and power supply pattern, plus meticulously selected and custom-designed parts, such as the transformer and heatsink. On the rear are large, sturdy binding posts. 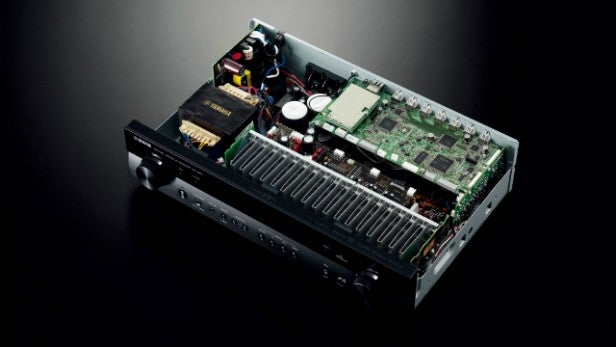 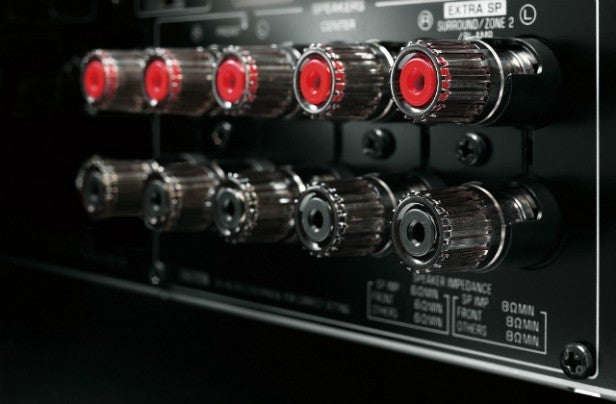 The aluminium front panel is split into two horizontal halves, the upper section of which sports a mirrored finish with a large, informative dot-matrix display in the middle. This contains all the basics such as formats, inputs and volume, as well as track titles and even the name of devices connected via HDMI.

The lower half sports a matte finish in the colour of your choice. The pared-down buttonry includes four Scene keys that jump to their nominal sources, and arrow buttons that toggle through the DSP modes. There are no HDMI ports on the front, just a USB port, a 3.5mm mini-jack input, headphone jack and socket for the auto-calibration microphone. Large input and volume knobs sit either side of the display.

The rear panel is hardly teeming with sockets, but should suffice for a modest system. There are six HDMI inputs, one of which supports 4K/60p signals and HDCP 2.2 and is therefore suitable for passing through Ultra HD Blu-ray signals. The similarly specced HDMI output also supports Audio Return Channel.

The HDMI ports are joined by three sets of AV inputs (optical, coaxial and analogue, each with a composite video jack) plus a second coaxial digital input, composite video out, two more analogue stereo inputs and a subwoofer pre-out.

Completing the lineup are an Ethernet port and terminals for FM, AM and Wi-Fi antennas. There’s built-in Wi-Fi and Bluetooth, the latter also allowing you to output audio to headphones or speakers. A peer-to-peer Wireless Direct option lets you stream music directly to the AVR from a smartphone or tablet, without going through a router.

The RX-S601 pulls music from pretty much any source, including Spotify Connect, Juke, vTuner internet radio, AirPlay and Bluetooth. You can also stream from PCs and NAS drives on your home network. The Yamaha’s extensive file support covers hi-res FLAC, AIFF and WAV files up to 192kHz/24-bit, plus ALAC up to 96/24 and DSD up to 5.6MHz. Naturally, you can play MP3, AAC and WMA too.

Those who like listening to albums in their entirely (especially live ones) will welcome gapless playback, which eliminates the annoying pause between tracks for all formats. 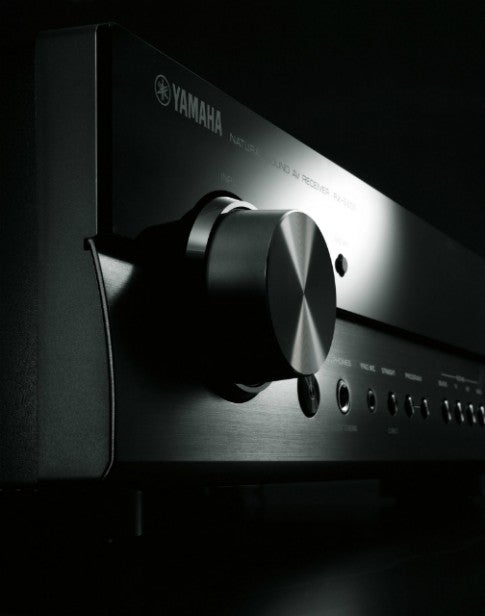 The RX-S601 also comes with Yamaha’s usual heady concoction of sound modes, headed up by Cinema DSP 3D, which attempts to create a “wide, high and dense” field of sound. There’s a long list of presets with exotic names – such as Cellar Club, The Bottom Line, Spectacle and Music Video.

Yamaha is keen not to let space constraints stop you from enjoying surround sound. Virtual Presence Speaker mode recreates the feeling of 3D sound formats such as Dolby Atmos, without having to actually install height speakers; Virtual Cinema DSP reproduces a 5.1 soundstage from two speakers.

Meanwhile, Virtual Cinema Front offers a 5.1 solution for those who have surround speakers but can’t install them behind the listening position. It generates virtual surround channels with all five speakers placed at the front of the room.

Other modes include Compressed Music Enhancer, Extra Bass and Subwoofer Trim, which separates the low-frequency output of the sub and speakers to enhance the overall bass balance.

There’s no need to spend hours fiddling with the settings to achieve the optimum sound – Yamaha’s YPAO system does it all for you. The supplied microphone picks up test tones emitted by the speakers, then the RX-S601 analyses your room acoustics and tweaks the parameters automatically. It’s reasonably quick and surprisingly accurate, but it’s always worth checking the settings afterwards, just to be sure.

The RX-S601 comes with a good old-fashioned remote, clad in fetching shades of black and silver. It’s peppered with buttons, most of which are a little small for my liking, and the spongy menu keys require a firmer press than usual. However, clear labelling makes it easy to find the function you want.

The all-important volume keys are clearly positioned and each input receives its own button – you don’t have to cycle through them. Flip a little switch and you can control the zone 2 output.

The RX-S601’s onscreen setup menu is so basic it makes NES graphics look like the PS4. That said, its simple layout is easy to follow and covers all bases. If you’re a glutton for punishment then you can go in and manually tweak the distance, level and EQ for each channel, or set parameters for the DSP modes. It’s all fairly straightforward.

The Yamaha’s rudimentary menus have a certain charm when setting up, but feel out of place in the hi-tech world of wireless music streaming.

Access the “Net” menu and DLNA devices are listed in a box with a basic colour scheme and low-res graphics. Hit the Display button and you can switch between the library and the Now Playing screen, which offers limited metadata but no artwork.

If you want something a little more 2016, turn your smartphone into a remote, with not one but two apps – MusicCast and AV Controller.

The former is your gateway to multiroom operation and network streaming. It’s superbly designed, making it easy to create groups of speakers and find music on your media server. It looks sophisticated without going over the top, with an intuitive layout keeping annoyance at bay. 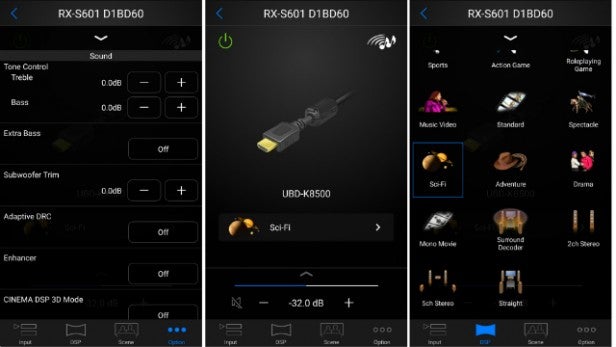 The slick AV Controller app covers a wider range of basic functions, but lacks the streaming features. One particularly clever menu lets you adjust the parameters of each DSP mode by dragging the onscreen graphic, while an “Advanced” version does the same job with boffin-friendly graphs. Elsewhere, you can adjust volume, switch sound modes and access the setup menu as you can with the other remote – except that it’s a lot more fun. 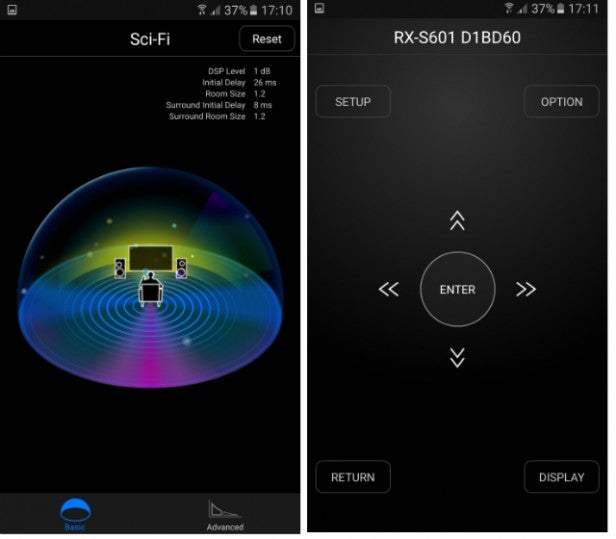 Play Star Wars: Episode III – Revenge of the Sith through the Yamaha and one word springs to mind: excitement. This isn’t the polite, laid-back approach you get from some amps at this price. The RX-S601’s sound is bold and forceful (pun intended), making it easy to get caught up in the action.

The opening space battle is reproduced with room-filling authority. As Anakin and Obi-Wan career through a flurry of explosions, lasers and roaring spaceships, the Yamaha sends forth the effects with snap and vigour. There’s a palpable sense of aggression and power to its sound, but it reins it in just enough to keep brashness at bay.

You don’t have to crank up the volume to silly levels in order to make the RX-S601 sing; its naturally dynamic character excites at middling levels, giving you the headroom to go really loud if need be.

Adding to the excitement is the Yamaha’s skilful soundstage control. It zaps effects to the surround speakers quickly and accurately, and steers moving objects between channels smoothly. Effects come at you from every angle, with Yamaha’s impressive Cinema DSP 3D mode creating a wonderfully expansive and spacious stage.

Deep, weighty bass notes and a well-rounded mid-range bring pleasing solidity to the overall sound. There’s a convincing impression of scale as Obi-Wan and Anakin have their fateful duel on Mustafar against the backdrop of booming volcanoes. Voices are clear and focused, allowing you to hear Lucas’ hackneyed lines over the intergalactic bedlam.

So what’s the catch? Well, despite doing the big, powerful stuff brilliantly, the Yamaha isn’t quite as adept at handling the movie’s quieter, subtler moments. There’s plenty of crisp detail in the mix, but it doesn’t dig out the finer nuances of a scene as well as the Denon AVR-X1300W, for example.

And just occasionally there’s a touch of stridency in the treble, when you push the volume level up high, which isn’t a major problem if you choose a speaker system that tames it effectively.

I tried flicking through some of the DSP modes that replicate the acoustics of a club or concert hall and struggled to comprehend how anyone could tolerate so much reverb – each to their own, I guess. Select the 2ch Stereo or Direct presets and the Yamaha delivers a very pleasing performance, using its natural dynamism and rhythmic ability to great effect.

Drums have attack and drive, vocals are clear, and there’s a great deal of warmth in pianos and basslines. Again, there could be a little more refinement in the high frequencies, but overall this is an impressively musical amp. 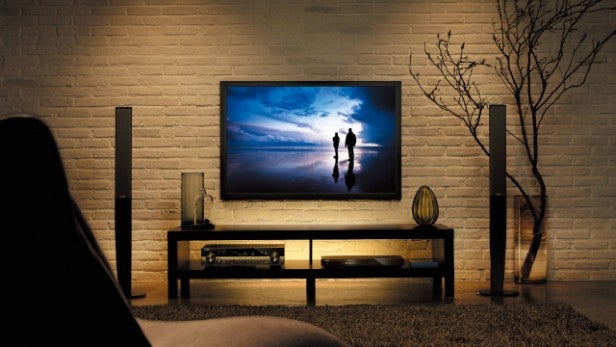 If you’re looking for a slim, space-saving AV receiver, but can’t fork out the £600 commanded by the Marantz NR1607 (which adds Dolby Atmos and DTS:X), then the RX-S601 is definitely worth a pop.

Its powerful, exciting sound gets the adrenalin flowing come movie night and gets your toe tapping when playing music. Features are generous, particularly on the wireless streaming side, while the slim, elegant design is a treat for the eyes.

My only reservations concern the old-fashioned onscreen menus and a lack of sonic finesse compared with the similarly priced Denon AVR-X1300W, which is a better option if you don’t need the slimline design.

An impressive AV receiver that delivers bold, exciting 5.1 sound and heaps of features from a slim, space-saving box.