If you’re looking to upgrade your sound system but don’t have a Premiership footballer’s budget at your disposal, Yamaha has an ideal solution. The NS-P20 is a 5.1-channel speaker package that sells for an eminently affordable £125 (approx) and is designed to be partnered with Yamaha’s equally-affordable AV receiver, the RX-V371. 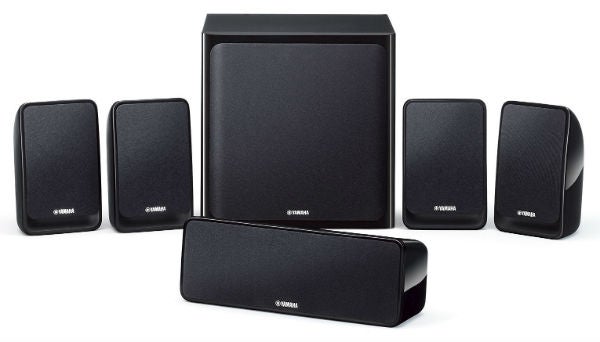 Naturally at this price it’s a compact system, which means it can be placed around the living room on AV racks, shelves or furniture without taking up much space. In the package are four NS-B20 satellites for the fronts and rears, an NS-C20 centre speaker and the NS-SW20 powered subwoofer.

Affordable it may be, but ugly it ain’t. The 176mm-high NS-B20s are styled in a sleek gloss-black finish, with a curvy back end that oozes elegance. Below the grille is a recess that serves no real purpose but makes an interesting aesthetic feature. The centre speaker is horizontally aligned for easy placement under a TV, measuring 291mm wide. All of the satellites sport keyhole opening on the back for wall mounting. 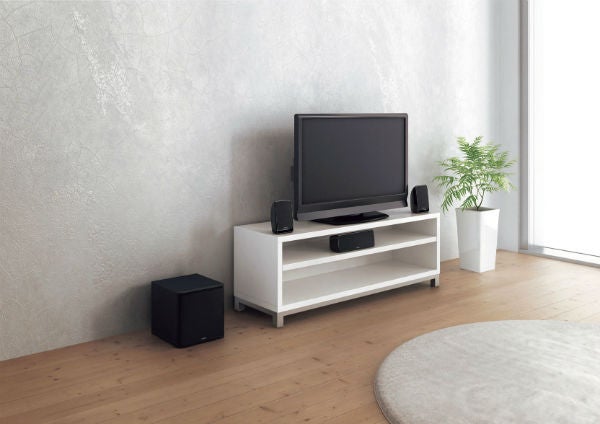 Closer inspection of the speakers reveals, somewhat unsurprisingly, that their build quality isn’t the best – the cabinets are light and plasticky, with tiny springclip terminals on the back that can be fiddly to rig up if your cables are thicker than the ones supplied in the box. But this is all par for the course, and as budget speakers go the NS-P20 is actually a nicely made little system.

The subwoofer’s build is decent, boasting a sturdy cube-shaped cabinet that should be easy to accommodate with dimensions of 262(w) x 264(h) x 299(d)mm. It’s a real bonus to get a powered sub – most brands would have gone with a passive model at this price – while flashes of gloss black here and there give it a little pizzazz.

For just over £100 don’t expect advanced, complex speaker tech. The NS-B20s use an acoustic suspension design with a single 7cm full range cone handling frequencies up to 25kHz. The centre features the same spec inside its longer enclosure. 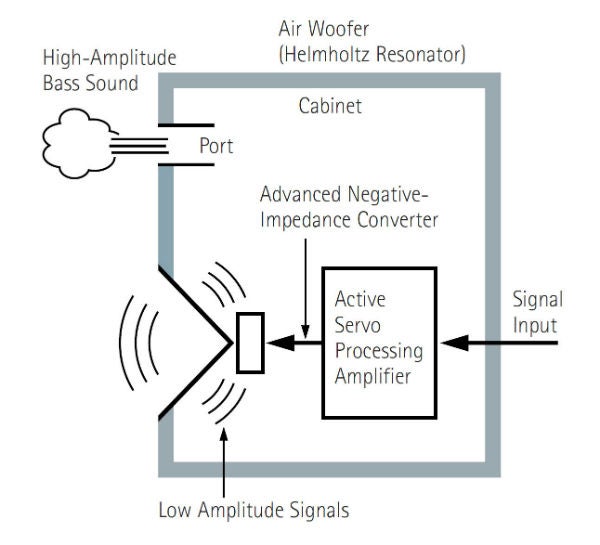 The subwoofer, however, does boast some clever tech, namely Advanced Active Servo Technology, which for some reason is abbreviated to Advanced YST. As the above diagram shows, the speaker and amplifier work together to cancel out impedance as the speaker moves, improving the rigidity of the 160mm cone and preventing resonant waves from leaking out of the speaker cone. All of the waves are pushed through the linear port in the side of the cabinet, theoretically resulting in deep, powerful bass. 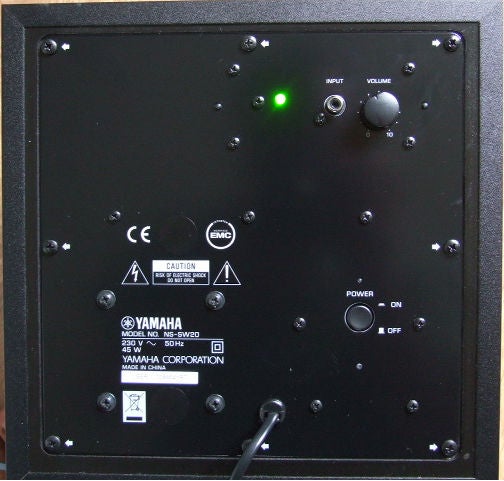 The subwoofer musters 50W power output, which doesn’t sound much but the Advanced YST is designed to make it sound bigger. On the back of the unit is a volume dial, single RCA input and power button, but no means of controlling crossover or phase.

Although the Yamaha NS-P20’s sound quality knocks your average TV speakers into a cocked hat, it simply doesn’t cut the mustard when compared with some of the budget systems we’ve tested of late. It’s no disaster, but is unable to hide the limitations of its peanuts price tag.

We gave it a baptism of fire with our favourite test scene from Hellboy II in DTS HD Master Audio (the Elemental tearing up the city), and were left underwhelmed. It struggles to convey the required sense of scale, making this chaotic scene sound thin and contained. Effects could also do with a bit more snap to drive up the adrenalin levels further.

It’s also lacking midrange clarity – the sound is either treble-heavy or overly bassy, there seems to be a void in between. Speech sounds clear though, so at least you won’t miss any important dialogue.

The subwoofer also does a decent job, backing up the satellites with punchy bass, although you need to be careful with the volume – set it too high and the cone flaps wildly, and the distortion has a detrimental effect on its depth and coherence. But when adjusted correctly it’s actually an effective performer.

Another positive is that the sound is crisp and zesty, delivering high-frequencies with a clear tone. Subtle details poke through this chaotic scene, like breaking glass, crumbling debris and shattering metal. The soundstage is spacious and the energy level is pleasing.

We also tried out the system with some TV material, boosted to pseudo 5.1 with Dolby Pro Logic II, and it actually suits the system much better. World Cup Rugby on ITV1 sounds exciting and immersive, particularly the crisply rendered crowd noises, while Torchwood’s mixture of action and dialogue sounds perfectly clear. Music playback lacks balance and finesse but is enjoyable enough.

If you’re on a tight budget then Yamaha’s NS-P20’s ultra-low price tag might prove too tempting to resist. The satellites’ curvy gloss-black design makes them a snazzy addition to any room, and the inclusion of a powered subwoofer is a bonus.

Sound quality is OK – unfussy listeners will appreciate the crispness and depth of the sound, particularly if you’ve just upgraded from TV speakers – but there are definite shortcomings, such as the contained soundstage, a lack of midrange clarity and an inability to convey blockbuster soundtracks on a big enough scale.

But picking faults in a £125 speaker system is like shooting fish in a barrel – the inevitable compromises made in reaching that alluring price tag mean it’s never going to match pricier compact systems on build quality or sound. And if that’s not a problem, then the NS-P20 might make a decent purchase.