A capable 2.1-channel soundbar, but a lack of immersive audio support puts it at a disadvantage to the competition

What is the Yamaha MusicCast BAR 400?

The Yamaha MusicCast BAR 400 is the latest model from a company that practically invented the concept of the soundbar. The YAS-408 (as it’s also known) is a two-channel bar with a separate active wireless subwoofer.

It doesn’t support any of the object-based audio formats, but does include DTS Virtual:X, which is designed to create a more immersive experience from a 2.1-channel system. As the name suggests, the BAR 400 also supports Yamaha’s MusicCast multiroom technology.

In terms of other key features, the BAR 400 supports high-resolution audio, has various music streaming services built in, and can be controlled via Amazon Alexa. You also get HDMI, Bluetooth, Apple AirPlay, and a Clear Voice feature.

The Yamaha MusicCast BAR 400 keeps things simple as far as the design is concerned, with a curved leading edge and a metal grille. The soundbar comes in black, has a brushed metal finish along the top, and is generally very well made. 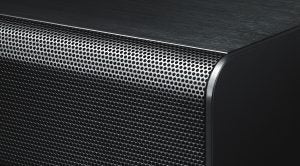 The soundbar uses a pair of front-firing speakers, each of which is composed of two 4.6cm woofers and a 2.5cm tweeter. There are 50W of built-in amplification for each speaker, so the BAR 400 has plenty of power.

It’s basically designed to be discreet, which is good because you don’t want a soundbar drawing attention to itself. There’s a slim profile, with a height of only 6cm, so it shouldn’t block the screen if placed in front of your TV. There are also screwholes at the rear, if you want to wall mount. 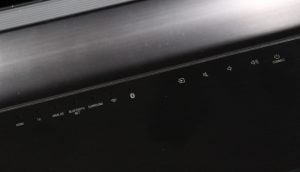 The only display is a series of small lights to the left of centre at rear of the top panel. These register whether you have selected HDMI, ARC, Analogue, and Bluetooth/Net. There are also indicators to show which surround mode is selected, and if there’s a Wi-Fi or Bluetooth connection.

Located to the right of these indicator lights are some basic touch-sensitive controls for source select, mute, volume up/down, and also power/connect. 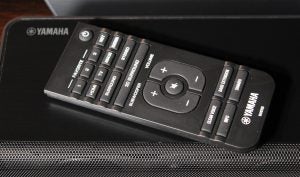 There’s a remote control included that can best be described as ‘dinky’. It’s the kind of remote that gets lost down the back of the sofa, but does at least include all the controls you’ll need. You can adjust the volume and subwoofer level, select inputs, and choose features like 3D Surround and Clear Voice.

You also have the option of operating the BAR 400 using the MusicCast app, which is highly effective and, in the absence of any kind of meaningful display on the soundbar itself, my preferred method of control. 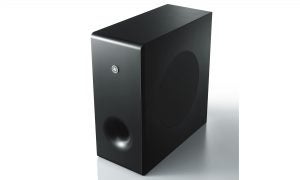 The subwoofer is composed of MDF, uses a black styling that matches the soundbar, measures 18 x 41.7 x 40.5cm, and weighs 9.4kg. It sports a side-firing 6.5″ driver, has a bass port at the front, and 100W of built-in amplification.

The headline feature on the Yamaha MusicCast BAR 400 is the inclusion of DTS Virtual:X, which is described as 3D surround sound processing for a single bar solution. What that means is that psychoacoustic processing is applied to a two-channel source in order to create the illusion of a more immersive surround experience. 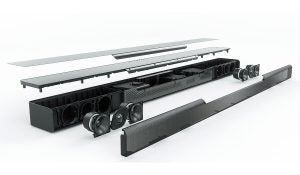 Yamaha appreciates that not everyone is interested in being immersed by sound, and people often find dialogue difficult to understand in modern surround mixes. Clear Voice is a feature designed to boost the clarity of dialogue in TV shows and movies.

Speaking of voices, you can use your’s to control the BAR 400 if there’s an Amazon Alexa speaker already in your house. I set up the Yamaha to work with my Alexa Echo, and while not the simplest process (you have to create a Yamaha account for some reason), it does at least work. Personally I find controlling a third-party device via Alexa to be less-than-intuitive, but you might feel differently. 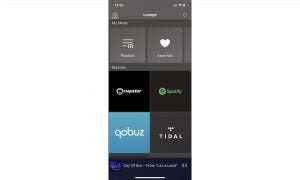 Another key feature, so much so that its part of the product’s name, is MusicCast. This is Yamaha’s multiroom technology that is now built into most of its products. It allows you to seamlessly stream music from one MusicCast device to another, all controlled by a dedicated app that is well-designed and intuitive.

There are a number of streaming services built in, including Spotify, Deezer, Tidal, and Qobuz. The BAR 400 also supports High-Resolution Audio up to 24bit/192kHz, for MP3, WAV, AAC, AIFF, WMA, Apple Lossless, and FLAC file types.

Thanks to MusicCast you can add wireless surrounds, using either the MusicCast 20 or 50 speakers, to create a 4.1-channel system. The soundbar has built-in Wi-Fi (2.4/5GHz), although if you don’t want to use MusicCast, you also have the option of connecting to the soundbar using Bluetooth (Ver. 4.2+EDR/A2DP, AVRCP) or Apple AirPlay. 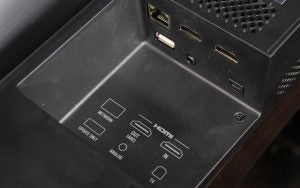 The physical connections are located in a recessed area on the underside of the soundbar, and here you’ll find an HDMI input and an HDMI output that supports ARC (Audio Return Channel). All the HDMI ports support Ultra HD 4K at 50/60p, Rec.2020, HDCP2.2, and High Dynamic Range (HDR10, Dolby Vision, and Hybrid Log-Gamma).

That’s all good, but one HDMI input at this price seems a bit stingy. There’s also an optical digital audio input, a 3.5mm analogue audio input, and an Ethernet port for a wired connection.

The Yamaha MusicCast BAR 400 is a doddle to set up: you simply place it in front of or under your TV, either on a stand or by wall mounting. The sub is wireless but you will need a power source, although it should pair automatically with the bar. Placement is fairly flexible, but I’d recommend positioning the sub at the front of the room and slightly away from the wall.

Since the BAR 400 doesn’t support lossless audio, there isn’t much benefit from connecting a source directly to the soundbar via HDMI. You could just as easily connect everything to your TV and then send the audio back via ARC. If you want to use Bluetooth, all you need to do is pair the Yamaha with your device. 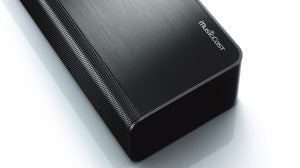 MusicCast is a key feature and, thanks to an intuitive remote app, it’s also very easy to set up. You just follow the instructions and once you’ve completed the process, you can stream music from your home network, other devices, and the various music services that are already built into the MusicCast app.

Yamaha’s experience in designing and making soundbars was obvious as soon as I started using it. The 2.1-channel system immediately delivered a pleasing front soundstage when watching TV programmes, with dialogue clearly delivered and music and effects spread across the left and right speakers. 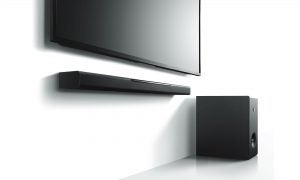 The mid-range was very solid, and the higher end was handled equally well, while the sub provided well-integrated bass. The result was a nicely balanced sound, with good localisation of instruments and placement of effects. Shows like The Great British Bake-off and Great British Menu sounded… well, great. Although the Clear Voice feature also proved effective at enhancing dialogue if necessary.

These overall strengths meant that the soundbar also proved very adept at handling music. Listening to the new Suede album The Blue Hour revealed a suitably epic sweep with the orchestration nicely rendered. Brett Anderson’s vocals came across clearly, and the lower registers were effectively filled out by the subwoofer. There was plenty of stereo separation, which resulted in some precise imaging, while the bass timing was suitably tight. 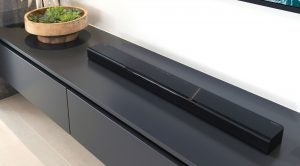 The performance with movies was rather limited by the 2.1-channel nature of the system, but with 200W of amplification the sound could go loud without becoming strained or fatiguing. The audio was obviously focussed at the front, but again the dialogue was clear and effects and music evenly spread across the front.

The system’s inherent limitations aside, a fairly dynamic mix like Ready Player One sounded very good, with a lively presence up front and plenty of low-end impact as well. There are surround options designed to deliver a more immersive experience but these vary in terms of their success. You can choose between Music, TV Programme, Movie, Sport, and Game, but none of them were especially effective, sounding rather flat and echoey.

The ‘3D Surround’ option, which engages the DTS Virtual:X processing, is more successful and does give the audio a greater sense of space. It isn’t as effective as the processing that Sony apply on their HT-ZF9 soundbar, but sounds do feel as if they are emanating from around the room in a way that they don’t when listening to the Yamaha in the 2.1-channel mode. The Virtual:X processing seemed particularly effective with DTS:X soundtracks, even though the Yamaha doesn’t technically support that format.

Why buy the Yamaha MusicCast BAR 400?

The Yamaha MusicCast BAR 400 is another great product from a manufacturer who largely pioneered the concept of a soundbar. It’s a well-made and attractively designed two-channel unit, with a beefy wireless subwoofer. The sound quality is impressive with movies, and the inclusion of DTS Virtual:X results in more immersive audio from the 2.1-channel system.

The lack of support for lossless, let alone immersive audio, is a shame, and there’s only one HDMI input, which seems a bit miserly. However, this soundbar makes up for its limitations with plenty of other features. Clear Voice is handy for those who struggle to hear dialogue, while the inclusion of Yamaha’s MusicCast multiroom technology is a real bonus.

This soundbar is excellent with music, and the inclusion of high-resolution audio support and numerous streaming services only enhances its sonic credentials. The ability to control the soundbar using Amazon Alexa is also cool, although it’s often easier to just grab the remote.

The obvious competitor is Sony’s HT-ZF9, which is almost the same price at £649, but adds an extra HDMI input and a number of other features. This 3.1-channel bar and wireless sub combination includes Sony’s Vertical Surround Engine, which creates an immersive experience in a similar fashion to DTS Virtual:X. However, the HT-ZF9 supports Dolby Atmos and DTS:X, making it more of a complete package in terms of modern object-based audio formats.

This capable 2.1-channel soundbar includes some useful features like DTS Virtual:X and MusicCast multiroom, but a lack of immersive audio support puts it at a disadvantage compared to the competition.