What is the Yamaha ISX-18D?

Part of Yamaha’s MusicCast multiroom family, the ISX-18D is a wireless speaker designed to look like a picture frame. You can hang it on the wall or place it on a shelf – either way, it lets you play your treasured tunes while blending in with your décor, something that’s all too important in these style-conscious times.

It’s a smaller, less powerful version of the ISX-80 wireless speaker, with added DAB radio (hence the “D” suffix). You can buy the ISX-18D individually, or as part of the £699 MusicCast Chorus package alongside the WX-010 compact speaker and the YAS-306 soundbar. 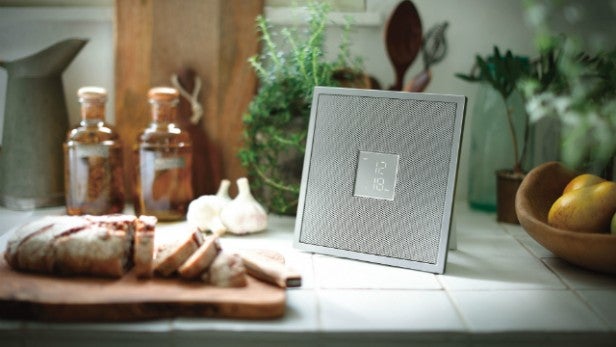 The ISX-18D (or “Restio”) boasts the same eye-catching square design as the ISX-80 but on a smaller scale, reducing the height and width by nearly 11cm. It’s effortlessly stylish, but the beauty is that it doesn’t really look like a speaker at all, more like a fancy alarm clock or picture frame.

Combine the above with the wireless connectivity and the ISX-18D is the perfect solution for anyone who isn’t a fan of clutter. 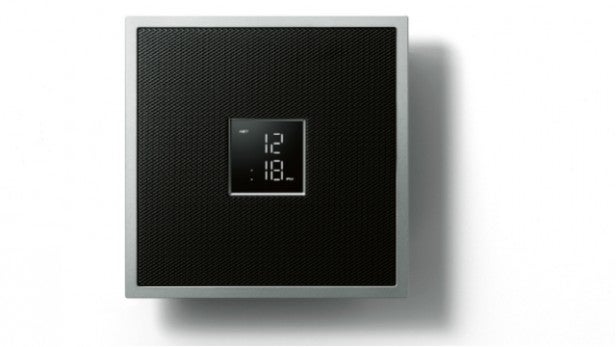 The clever styling is backed up by solid build quality. The front face is fitted with a firm steel mesh, while the surrounding frame is cut from a single sheet of aluminium. It feels robust and looks great – the light silver frame contrasts strikingly with the darker grille. A white version is also available.

The only bum note design-wise is the clock display in the middle of the grille. The time is shown in old-fashioned, seven-segment LEDs and split over two lines, which looks a little awkward. Other small icons are dotted around it, displaying the current input, but they’re a bit small. It won’t offend everyone, but I found it clunky. 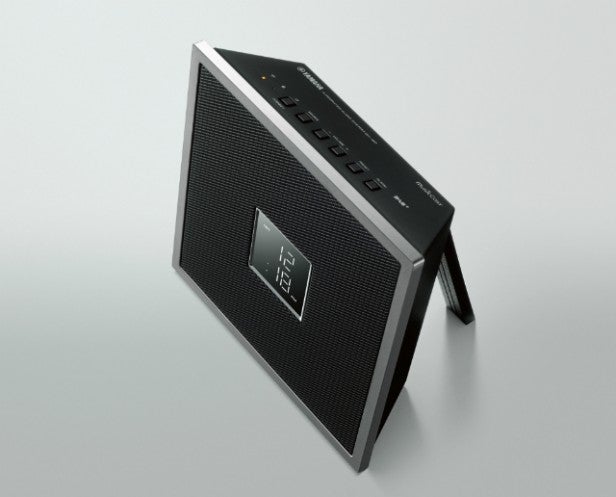 The plastic back-end sports a row of six buttons on top covering volume, input/preset selection and alarm setting. A couple of tiny LEDs reveal the network and Bluetooth status.

A recess on the back offers an Ethernet port, DAB/FM radio antenna terminal and a micro-USB port for service only. The 3.5mm mini-jack found on the ISX-80 is missing here. 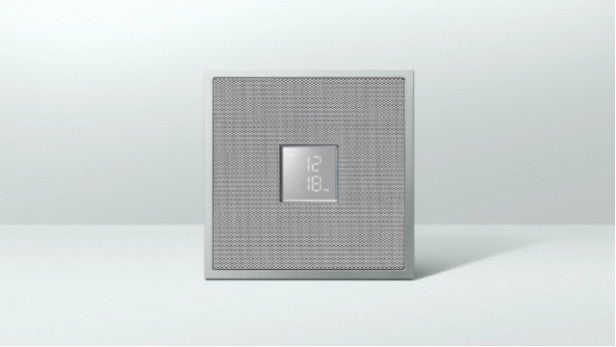 If you want to place the ISX-18D on a flat surface, simply screw the supplied leg to the back and prop it up as you would a picture frame. Alternatively, you can hang it on the wall using the keyhole fixing.

Don’t be fooled by the Yamaha’s un-techy appearance – there’s tons going on inside. With built-in Wi-Fi and support for Yamaha’s MusicCast platform, you can stream music from a variety of services (Spotify, Napster, Qobuz, Juke!, vTuner internet radio) or from PCs/NAS drives on your home network via DLNA. It supports hi-res FLAC, WAV and AIFF playback up to 192kHz and ALAC up to 96kHz. 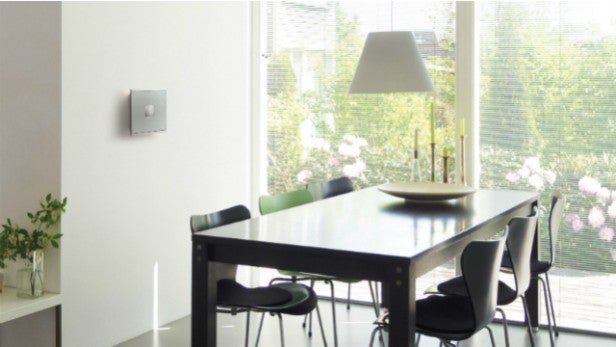 With multiple MusicCast speakers linked up you can send music to the entire system simultaneously, or zap different tunes to individual speakers. It’s all controlled by Yamaha’s MusicCast smartphone app. You can even transmit audio from any source throughout the entire system, such as TV shows from a soundbar or Bluetooth.

If you don’t fancy dabbling in MusicCast, there’s AirPlay support and built-in Bluetooth, as well as the aforementioned DAB radio tuner. An integrated alarm clock completes the lineup. 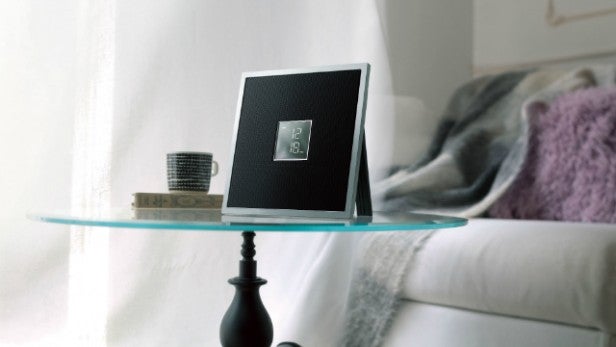 The ISX-18D’s smaller size requires a scaled-down speaker arrangement. Instead of the ISX-80’s dual 8cm woofer and 3cm tweeter array, the ISX-18D offers a single 5cm woofer and 2.5cm tweeter. There’s a lower power rating too, down to 10W per channel from the ISX-80’s 2 x 15W.

I should make it clear right now that if you’re not down with the whole smartphone/app thing then the ISX-18D probably isn’t a good idea. It’s heavily reliant on the MusicCast app for setup and operation, and there’s no physical remote to back it up. That’s not unusual, but worth highlighting. 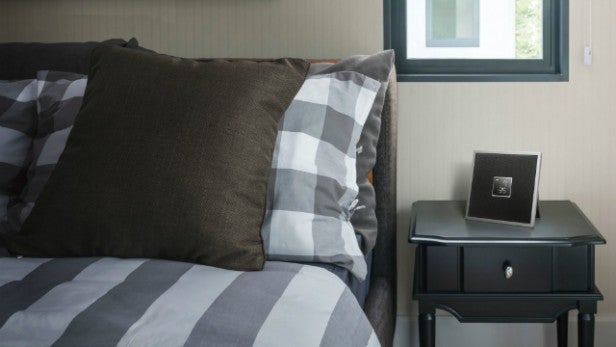 But if you’re au fait with remote apps then you’ll find plenty to like here. The setup process is easy: just power up your speaker, launch the app, hold down the Connect button for five seconds and it looks for the speaker. Key in your Wi-Fi password and wait for it to connect, which takes a while, but at least you don’t have to do it again once connected.

After that, everything you need can be accessed from the app’s various menus. There are individual setup menus for each connected speaker, where you can update the firmware, change the speaker name/picture, dim the front display and much more.

A dedicated EQ page allows you to adjust the bass, mids and treble using sliders. The ISX-18D’s setup menu has a clock section that lets you sync the time automatically with the phone and set the alarm.

The app makes music streaming and multiroom operation simple thanks to its no-nonsense layout. Tap a speaker – or group – and you’ll see the music selection menu, where streaming services, sources and servers are displayed as large tiles. The My Music section at the top lets you store Favourite songs and radio presets or create playlists. 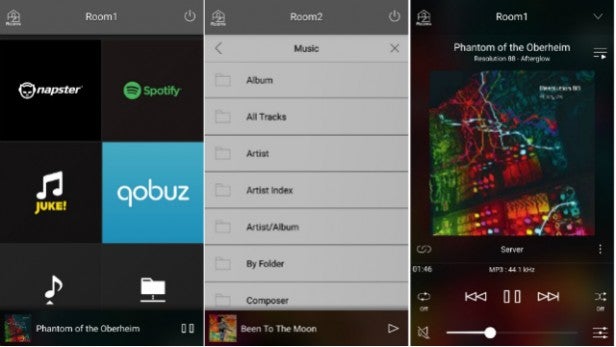 It’s clear, easy to follow and not bogged down by unnecessarily complex graphics. Moving from one screen to another feels intuitive, and the app responds quickly. I had no trouble delving into the deepest recesses of my NAS drive, although it does take a few seconds to update each page of albums or songs while swiping through a library.

When playing a track, the Now Playing screen is dominated by cover art, with playback controls and a volume slider at the bottom. You can share the track on social media or jump directly back to the Rooms menu.

My only complaint is that you have to hold down the track-skip button to scan through a song – you can’t simply drag a slider. 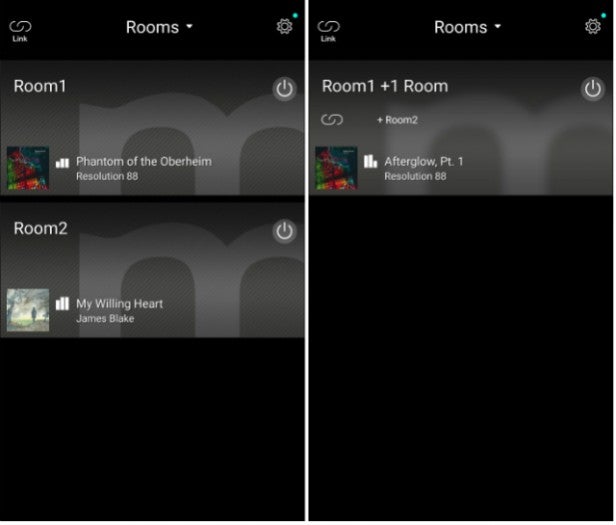 To group speakers together you’ll need the Rooms menu, where they’re displayed in individual boxes; tap the Link icon and you can select which speaker is the master and which ones you want to link. The selected speakers then merge into one panel, with the same music playing through them all. 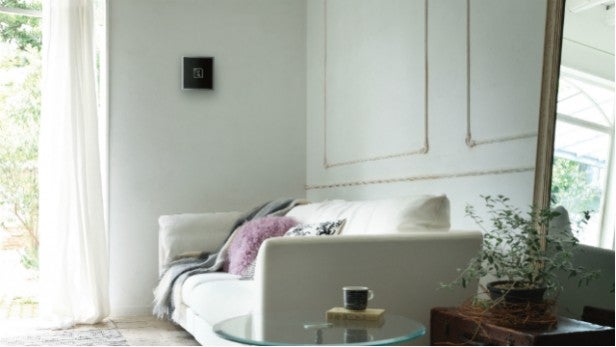 I grouped the ISX-18D with the WX-010 speaker, and although I had no problems getting it to work, they did go out of sync fairly regularly. That’s not a major problem if they’re in different rooms, but it would be a disaster if you were using two speakers in a stereo pair (as you can with the WX-010).

There are settings to improve stability and speed, but boosting one can have an adverse affect on the other, so I left it in Standard.

In terms of sound quality, the ISX-80 didn’t blow me away – and neither does the ISX-18D. It’s perfectly enjoyable, with a good balance across the frequencies and decent clarity – but ultimately, I found its presentation too bland and uninvolving.

That’s fine for a lazy Sunday morning thumbing though the broadsheets, but if you’re after power, excitement and pizzazz come Saturday night then you might want to check out rivals from the likes of Denon or Panasonic. 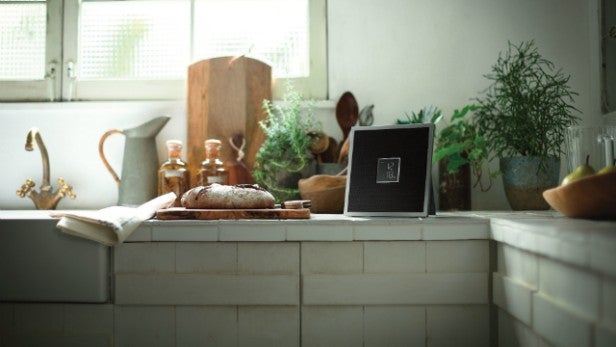 On the plus side, you can turn up the Yamaha reasonably loud before it starts to distort, and there’s a reasonable amount of bass given the limited driver size and internal volume.

The disco-funk bassline in “Love Foolosophy” by Jamiroquai display decent agility and weight, while the drums punch through solidly. The ISX-80 delivers slightly bigger, beefier bass, but its little brother certainly doesn’t let itself down.

There’s decent clarity in the high frequencies too. You can pick out hi-hats and percussion shuffling away, as well as more obvious vocal details. 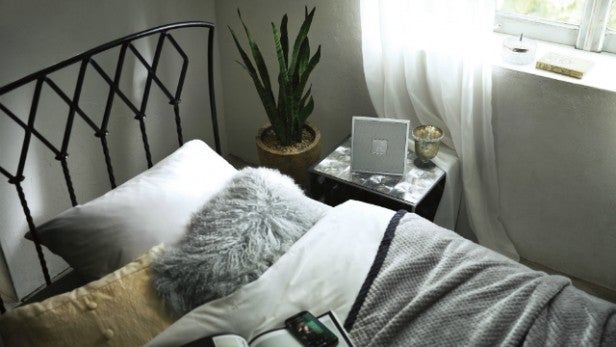 With more attack and a fuller-bodied mid-range the Yamaha’s sound might have been more exciting, but sadly it falls a little flat. However, what the ISX-18D lacks in audio prowess it makes up for in style and convenience, which might be of greater significance to some buyers. 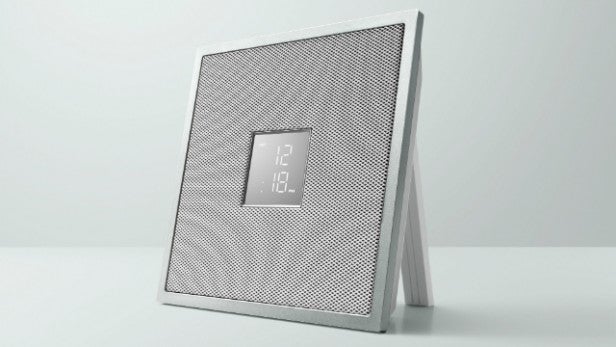 Should I buy the Yamaha ISX-18D?

Deciding whether or not to buy the ISX-18D comes down to a choice between style and substance. It has plenty of the former, with a chic, distinctive design that’s sure to enhance your living space, but lacklustre sound quality means the latter is in short supply.

It isn’t a bad performer as such – there’s decent clarity, bass and volume – but overall it lacks the attack and finesse needed to get your pulse racing. It’s all a little bland.

That said, the ISX-18D’s healthy feature list – led by the terrific MusicCast multiroom platform – solid build quality and chic design might still be enough to earn it a place on your wall.

With its living room-friendly looks and generous features, the ISX-18D is the ideal streaming speaker for fashionistas – but audiophiles will find little to write home about.