With supermarkets selling DVD players for next to nothing (we spotted one in Tesco for just £15) it’s getting harder to justify forking out for a more expensive spinner. But anyone with an ounce of common sense can see the benefits in splashing out on a good quality deck from a well-known brand – not only are you likely to get superior pictures and better build quality, but you’ll also find features and format support that you probably won’t at bargain basement prices. So with this in mind, we’re taking a look at Yamaha’s entry-level DVD-S661, which isn’t cheap but boasts a healthy-looking feature list, and hopefully the company’s wealth of AV experience will result in a strong performance.

The look is classic Yamaha. The angular lines and black finish are sleek and alluring, matching the company’s range of AV receivers (it’s also available in silver), while the slimline dimensions won’t take up much of your precious shelf space. Yamaha has also abstained from packing the fascia with buttons, making it feel pleasantly uncluttered, while the info display is compact but legible. On the right hand side is a USB port, which accepts MP3 players and USB memory devices for playback of digital music, video and photos.


Around the back is a run-of-the-mill socket line-up. Chief among these is an HDMI output for digital transfer of pictures to a suitably equipped TV, and on the analogue side Yamaha keeps faith with RGB SCART, component, S-video and composite outputs. These are joined by stereo audio output and a single coaxial digital audio port for piping digital audio bitstreams to your amp, but if your amp only sports an optical input then you’ll need a converter. The lack of 5.1-channel outputs suggests there’s no hi-res audio or built-in Dolby Digital decoding, which is a shame for the money, but you will find remote control input and output, which enables you to start playing a DVD using the controls on a Yamaha receiver that boasts the SCENE feature.


The deck can boost DVDs to 720p or 1080i to match the resolution of an HD TV, but sadly it doesn’t offer 1080p output, which puts it at a disadvantage to several similarly priced rivals.

Perhaps the DVD-S661’s most impressive aspect is its wide format compatibility. The unit is DivX certified, which means it supports all versions up to and including 6, alongside interactive menus, subtitles, alternate audio tracks and video-on-demand. It also plays MP3, WMA and JPEG files from discs and USB devices, and can even play MP3s and JPEGs simultaneously. Another bonus is HD JPEG playback, which displays photos in their native resolution via the HDMI output – a real boon if you’re fed up with the jagged, blurry JPEG playback offered by most DVD players.


On the disc front, you can play DVD-R, DVD-R (DL), DVD-RW (formatted in either Video or VR mode), DVD+RW, DVD+R and DVD+R (DL), alongside Video CD, Super Video CD, CD-R and CD-RW. However, it won’t play DVD-Audio or SACD, which is disappointing given that decks like the Pioneer DV-600AV play both for around the same price.

Elsewhere there’s a range of less important features, such as a six-stage picture zoom, resume play with a 10-disc memory and night mode. Internal components include a 108MHz/12-bit video DAC and 192kHz/24-bit audio DAC.


Delve into the video setup menu and you’ll find a selection of picture presets (Standard, Bright and Soft) plus a personal setting that lets you input your own brightness, colour and contrast levels. On the audio side you can set a sound delay to combat lip sync issues. 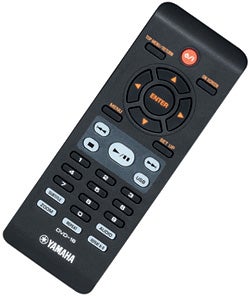 Elements of the player feel derivative – the setup menu is a generic affair, the sort of basic interface we’ve seen countless times before, and the multi-language manual looks like one you’d get with a Sony. On the plus side, onscreen displays are easy to navigate, lettering is clear and the software responds snappily to remote control commands.


Talking of which, the zapper is a little unusual – its stumpy shape makes it less ergonomic than most ‘full sized’ remotes, but the placement of the menu controls at the top where your thumb naturally lies is a canny move. Otherwise the buttons are well labelled, but the need to hold down the chapter skip keys to search forward or back is highly annoying.

The Yamaha’s picture performance is uniformly excellent. We used the trusty ”King Kong” disc on a 52in 1080p flat-panel, and with the upscaling set to 1080i we were impressed by the sharpness and solidity of the image. Its strong detail reproduction is best demonstrated by shots of Kong perched on his cliff top lookout – the surrounding scenery, with its busy mixture of vines, bushes and plants, looks steady and focused, with very little twitching or noise to interfere with the clarity. Shots of Kong himself are expertly rendered too – his craggy face is displayed with every crease and wrinkle intact, plus you can pick out individual strands of fur.


Dark scenes don’t reveal any problems either. Shots of Jack creeping through a cave full of bats demonstrate terrific black level as well as top notch contrast and shadow detailing, plus there isn’t an excessive amount of noise lurking in the background.

And when the situation calls for it, the DVD-S661 conjures up some dazzling colours – an ability put to good use during the vibrant scenes on Skull Island. Skin tones are also well-judged, rounding off a really impressive performance.


The Yamaha also serves up some seriously exciting multichannel sound from its digital audio output – check out the planes swirling around the Empire State Building for proof – and with CD playback it stays true to Yamaha’s respected audio roots with a polished performance from the analogue stereo outputs.


Had Yamaha slipped DVD-Audio/SACD playback and 1080p upscaling onto the DVD-S661’s feature list, we would have had a certified ‘must-buy’ on our hands, but as it stands these omissions prove to be its undoing. You can pick up players from the likes of Pioneer and OPPO that provide these features for a similar amount of money, greatly reducing the Yamaha’s value factor.


But what you do get for your green is a slimline, attractive and well-built player that offers a competent performance and some handy features. It certainly won’t leave you feeling disappointed, but just be sure to check out the competition before buying.