Owners of Yamaha AV receivers who want to keep their Blu-ray player ‘in the family’ might like to check out the company’s latest entry-level deck, which is designed to match its audio gear both aesthetically and electronically. Instead of dazzling you with a list of cutting-edge features, its aim is simply to provide high-quality hi-def pictures to accompany those scintillating Blu-ray sounds.


The BD-S1900 is one of two players in the company’s current range – both have very similar-looking spec sheets and designs, but the more expensive BD-S1065 purports to offer even better picture and sound quality. Contrary to the general trend of larger product numbers denoting models higher up a product range.

Anyone familiar with Yamaha’s previous AV products will know what to expect aesthetically – straight lines, a stylish jet-black finish and an orange LED panel up front. It might not push the boat out but will delight enthusiasts who want their disc players to look like disc players, not ornaments. They’ll also be encouraged by the excellent build quality, which makes the bodywork feel sturdy and vibration-resistant.


Around the back the prognosis is positive. Most significantly you get a set of 7.1-channel analogue outputs, which is quite common among players at this sort of price but not in the budget bracket. It means you can sample the hi-res delights of Dolby True HD and DTS HD Master Audio soundtracks even if your receiver hails from the pre-HDMI era.

Of course, owners of more up-to-date audio kit can transfer HD bit-streams along an HDMI cable, as well as sending a 1080/24p video signal to your display. You’ll also find component and composite video outputs, alongside the unusual sight of an S-video output, which is as useful here as a fuel tank in an electric car. Audio connectivity is completed by optical and coaxial digital outputs and analogue stereo output, while custom installers can make use of the remote control ports.


Naturally the BD-S1900 is a Profile 2.0 player, but can only connect to the internet using the Ethernet port on the rear, which already feels old-fashioned in the days of Wi-Fi enabled players. There’s also no sign of any network streaming, which would have increased the deck’s multimedia potential.

In fact the player’s digital media support is pretty measly full stop. The only file types it’ll play are JPEG and AVCHD, but not MP3, WMA, DivX, DivX HD or MKV. To rub salt in the wound these have to be played from disc as the USB port on the rear can only be used to save BD Live downloads onto a flash drive, or to upload software updates.


Thankfully the Yamaha BD-S1900 is easy to use. The main menu uses four large boxes with huge eye-catching logos, which is a tad clunky but makes it easy to find what you’re looking for. It’s the same menu seen on Sharp’s Blu-ray players, but we won’t hold that against it.

The Settings section explains all its options in full sentences, which will help the uninitiated understand the implications of a particular choice. The cursor behaves itself too, moving around without the sluggishness that can really frustrate when you’ve got lots of tweaking to do.


We’re also pleased with the remote. The layout is spot-on, there’s been some attempt to colour-code the different types of buttons and clear labelling takes guesswork out of the equation.


But like many Blu-ray players in this price bracket, the Yamaha is painfully slow to load discs, the only aspect of Blu-ray technology that continues to infuriate. The packed Terminator Salvation disc took close to two minutes to start playing.

Keeping with the robot theme we switched to Transformers: Revenge of the Fallen on Blu-ray and the Yamaha delivers an impressive subjective performance. A good Blu-ray player should deliver pictures that smack you round the chops with intensely sharp detail from the very first frame, and the BD-S1900 does just that – fine textures, such as the ripples of sand in the Egyptian desert or the ornate buildings of Sam’s college, are delivered with immaculate clarity. It gives images that punchy, three-dimensional look that draws you right into the action.


Contrast is excellent, shadow detail during dark scenes is clear and we couldn’t detect any edge stepping or digital artefacts – the deck delivers the cleanest possible digital signal to your display, and you can’t ask for more than that. It’s also worth using it with a 24fps-capable TV, as the lack of judder helps you keep track of the robots’ frantic movement and Bay’s hyper-kinetic camera work.

Of course, most people have tons of existing DVDs that they’ll want to spin on this player and we’re pleased to say it does a great job of boosting them from SD to HD resolution. Taking a look at Apocalypto, it’s really difficult to discern any artefacts among the detail packed rainforest surroundings, while colours look realistic and the breakneck chase scenes are as smoothly tracked as we’ve seen. 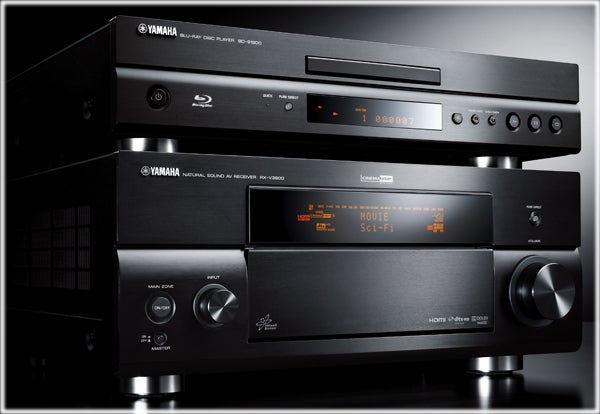 These dazzling pictures are backed up by sumptuous sound quality. Sending the digital bit-stream down the HDMI cable to a compatible AV receiver (in this case the Onkyo TX-NR807) offers the cleanest and most convenient way of hearing HD audio, but the deck’s produces equally enthralling results using its own decoders and 7.1-channel analogue outs. Its dynamic rendition of Transformers’ DTS HD Master Audio track really gets the adrenalin pumping – there’s loads of detail bursting from the speakers, channel separation and steering are flawless and bass output is colossal.


The Blu-ray player market seems to be split into two camps – cutting-edge, boundary-pushing decks from the big-name brands, and feature-light performance-driven players from third-party manufacturers. The BD-S1900 is undoubtedly one of the latter, and if you approach it as such then you won’t be disappointed – its picture, sound and build quality is as good as you’d expect for the money, and if you own a Yamaha AV receiver then it makes sense to match it with a similarly stylish Blu-ray player.


But if you want an enticing set of features to go with that impressive performance, then you’re best advised to check out the latest players from Panasonic, LG, Samsung and Sony, which offer better format support, faster disc loading, Wi-Fi support and PC streaming, – and in buying one you’ll save yourself a few quid too.