The BD-S667 is the latest addition to Yamaha’s Blu-ray player family, adding several features not found on the disappointing BD-S1900 and the performance-focused BD-S1065. Good job too, because with a price tag nudging £300, it’s up against some stiff competition, not only from similarly-priced players but some cheaper ones too. Let’s see how it fares.


From an aesthetic perspective, the BD-S667 plays it safe – it’s a moody, minimal black box without any curves or snazzy embellishments to speak of. But if it ain’t broke don’t fix it, and fans of the company’s distinctive design certainly won’t be disappointed, particularly if you’re pairing it with one of Yamaha’s matching AV receivers.

There is one slight change though – for some reason Yamaha has swapped round the positions of the LED display and disc tray (the BD-S1900’s tray was above the display), a decision sure to send shockwaves through the AV community. Six playback buttons are provided on the front panel but the rest are wisely reserved for the remote control. The left-hand side of the fascia houses a USB port for digital media playback.


The rear panel offers a standard selection of sockets – the only significant omission is a set of multichannel analogue audio outputs, but with HDMI inputs being a common feature on most new AV receivers their absence isn’t a big deal. However, you do get analogue stereo, optical and coaxial digital audio outputs, while on the video side you get component, composite and HDMI outputs.

Next to these is an Ethernet connection, which is your only way of accessing BD Live/network content as there’s no Wi-Fi support. Below the LAN socket is a second USB port, primarily provided for BD Live storage but can also be used to load software updates or play digital media.


On that subject, the BD-S667 supports a much wider range of formats than the BD-S1900 (in fact, the S1900 doesn’t support media playback via USB at all). The S667 plays DivX HD, WMV HD, MP3, WMA and JPEG, plus AVCHD from DVDs, which is a healthy selection.


One of the big upgrades from the BD-S1900 is the addition of DLNA media streaming. This allows the BD-S667 to access music, video and photos (MP3, WMA, JPEG, WMV) stored on other networked devices like laptops and NAS drives. Until now, features like this were reserved for big brands like LG, Panasonic and Samsung which have the resources to develop such features, but it’s great to see the rest of the market catching up.


Inside are decoders for Dolby TrueHD and DTS HD Master Audio, enabling you to feed these formats to your receiver in PCM if it lacks the relevant decoding, but they can also be transferred in bitstream form. You can also output video in 576i, 576p, 720p, 1080i, 1080p or 1080/24p, but the Auto mode will choose the appropriate resolution for your TV.

That’s about it for features (apart from the usual useless stuff like Deep Colour and HDMI CEC), but in terms of operation, Yamaha has made the BD-S667 very easy to use. When you first power it up, you’re escorted through the main settings – onscreen language, aspect ratio and resolution – which saves you having to set them manually later.


Interestingly, the Home menu – which is superimposed over a crisp HD image of a grand piano – uses the same design as the Toshiba BDX2100, using full colour graphics, eye-catching icons and sharp fonts. It’s slick, sensibly arranged and responds sharply to infrared commands.

But the Yamaha lacks the extra ‘Motion Video Processing’ menu found on the Tosh, which includes presets, noise reduction and detailed colour adjustments. Instead you’re restricted to a more simple Video Processing menu where you can adjust the basic picture parameters – brightness, contrast, hue, saturation and sharpness.


Looking for network content is simple enough – your connected DLNA devices appear in the main menu on the left, allowing you to search through the folder tree until you find the required files. When a song is playing, the screen is black with all the file details plonked right in the middle. The same method is used to play back content from USB drives. It’s not the most fun or innovative system you’ll ever see but it’s functional and easy to follow. More importantly, every file we tried streamed smoothly to the player without any problems. 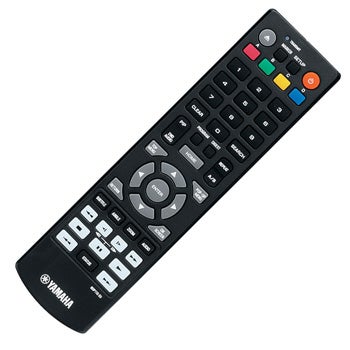 The remote also poses few problems. Different groups of buttons are given different colours (white for playback, grey for menu control) which makes it easy to find the one you want. Labelling is clear and frequently used keys like Home, pop-up menu and Top Menu are dotted sensibly around the direction keys.


Blu-ray disc loading is relatively slow, but it’s a vast improvement on the BD-S1900. ”Terminator Salvation” started playing exactly one minute after pressing close on the tray, whereas the S1900 took closer to two minutes. That’s not bad, but sluggish compared to players from the likes of LG and Samsung.

We started picture testing with the Silicon Optix HQV disc and the BD-S667 stumbles over some of the tricky test patterns. The Video and Film Resolution Loss SMPTE patterns are devoid of any strobing, but the latter test’s camera pan across Raymond James stadium is horribly juddery whether the output is set to 50Hz or 24Hz. The movement of the rotating bars also suffers from significant judder, but on the plus side there’s no stepping on the edges.

Thankfully the Yamaha masks any such objective shortcomings with movie playback, turning in a top-drawer performance with ”The Dark Knight”. As the camera moves towards the skyscraper in the movie’s opening shot, the detail on the surrounding rooftops is as crisp as we’ve seen it, and as the bank robbery scene continues you’re bombarded with loads more of this emphatically defined detail – everything from the Joker’s jacket material to strands of hair looks scalpel sharp.


Also impressive is the deck’s black depth and shadow detailing, both of which are essential during a film this gloomy, while the natural colour palette ensures that skin tones and other subtle shades look exactly as they should. We couldn’t spot any noise or other glitches in the picture, a sign that the all-digital HDMI output is doing its job well. 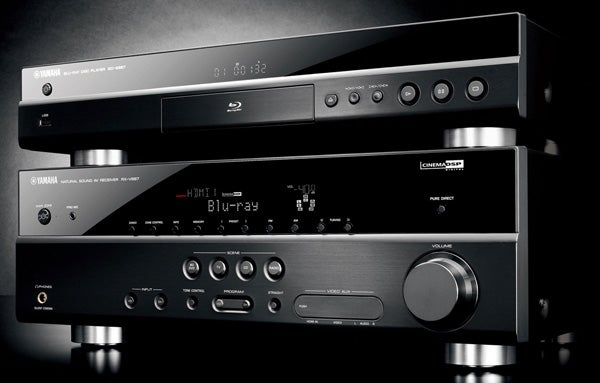 
Upscaled DVD playback is fine, although the Silicon Optix HQV disc shows up some artefacts. There are some visible jaggies on the stripes of the flapping flag, but the detail test is stable and it passes the jaggies tests with no trouble. Movies look good too, although noise levels are higher than Blu-ray pictures.


With such an esteemed audio background, it would be a big surprise if Yamaha slipped up in the sound department. Thankfully it doesn’t, delivering amazingly forthright and dynamic PCM sound over the HDMI connection and smooth, well-balanced music playback over the analogue stereo outputs.


The BD-S667 isn’t a spectacular Blu-ray player by any stretch of the imagination, but is certainly a big improvement on previous Yamaha decks. The inclusion of DLNA networking, wider format support and faster disc loading makes it a much more likely candidate for your cash, while the typically sleek Yamaha looks and tweaked operating system are also welcome. People who want a Blu-ray player to match their Yamaha receiver can add this deck to their system with confidence.


But with a price tag creeping dangerously close to £300, we still think you can get better value for money elsewhere. Players like the LG BD570, Sony BDP-S570 and Samsung BD-C6900 offer even more features than the BD-S667 – as well as faster disc loading, prettier looks and equally sharp pictures – for a much lower price. We’d therefore recommend investigating these first before taking the Yamaha to the checkout.