A clever and powerful system with lots of sensor options, but the Yale Smart Home Alarm could do with a SIM backup option.

What is the Yale Smart Home Alarm?

Yale has a long history in self-fit alarms, dominating the shelves at DIY stores. With the Yale Smart Home Alarm, the company is expanding its selection, offering remote control and monitoring while retaining compatibility with the existing sensors.

Lack of a SIM back-up option is a bit of a missed opportunity, but the wide range of sensors, sirens and unlock options make the Smart Home Alarm a neat product.

Alarm systems aren’t really there to be attractive on display. Yale, like other manufacturers, has made its sensors unobtrusive, designed to be kept neatly out the way. All sensors are wireless and come with a two-year battery life and made from glossy plastic, but they feel robust with no flex in the case.

The window/door sensors (£22.75) are comparatively small when compared to those sold by other manufacturers. These can be attached via the provided sticky pads or by screwing them directly to a frame. Each sensor has a spring-activated tamper sensor: if a sensor is dislodged, the alarm sounds. 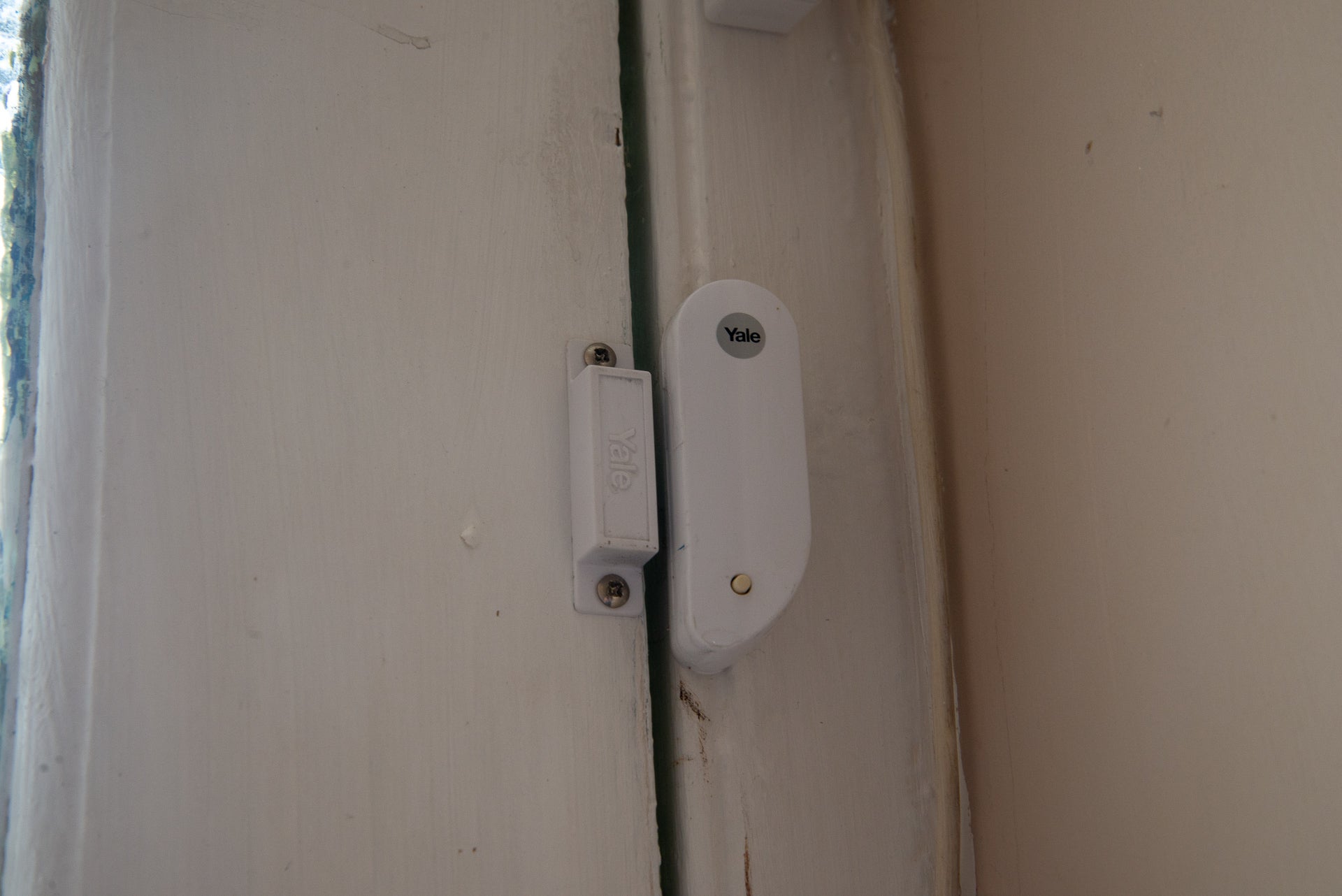 The motion sensors are designed to be screwed directly to a wall and have no sticky mount option. Standard motion sensors are available (£37.63), but Yale also has a range of pet-compatible sensors (£38.57), which are designed to ignore movement lower down. Placement of these is crucial: if they face a bit of furniture that a pet jumps up on, you can get false alarms. 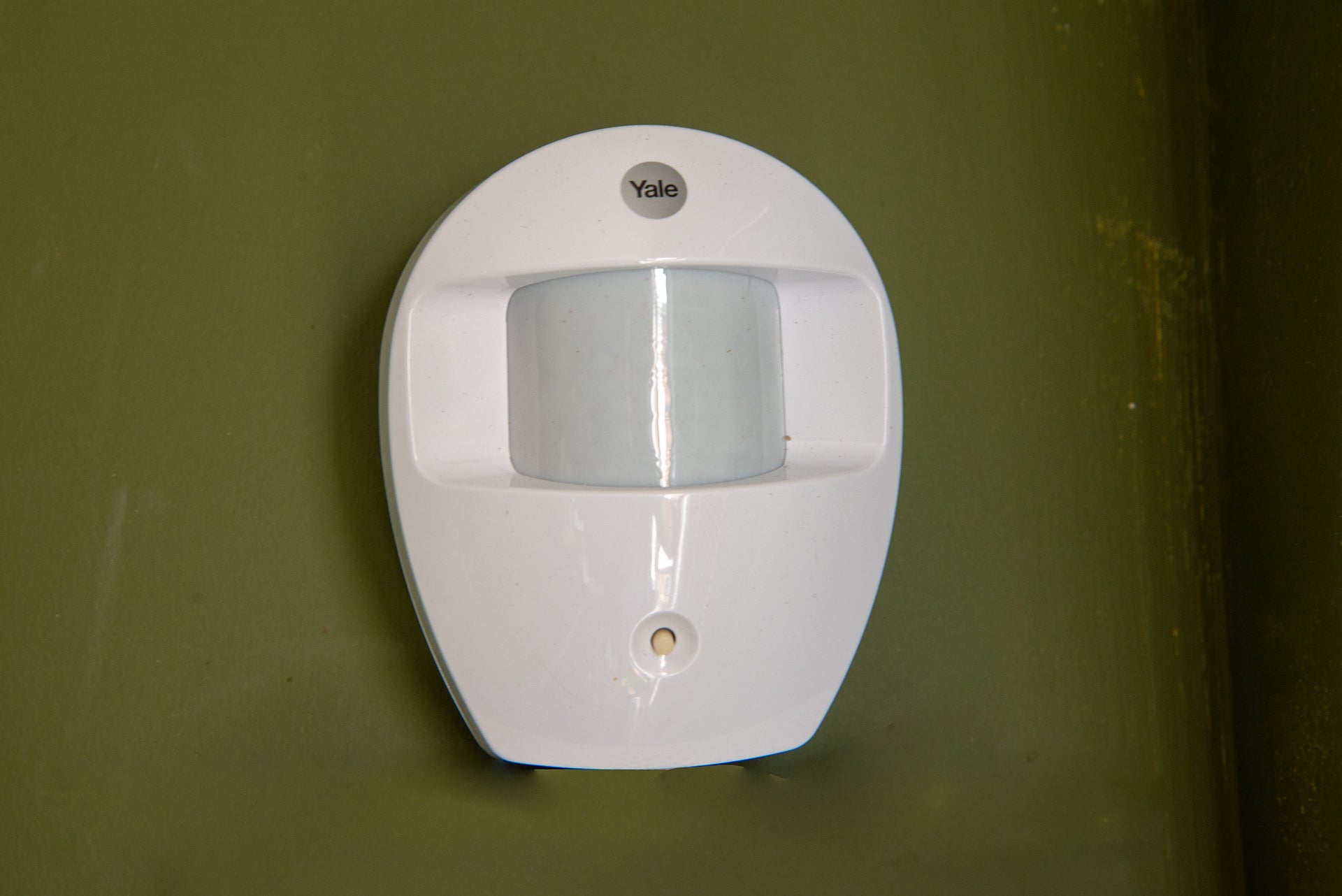 Yale also has a PIR Video Camera (£131.71), which records a low-res 10-second video clip when triggered, and a PIR Picture Camera (£119.20), which takes a low-res image when triggered. Neither’s a replacement to a video camera, but can show you quickly what’s going on in your home, so you know if there’s a false alarm or if there’s really a burglar there.

The Hub (£169.34) is the brains of the system, controlling all your devices and communicating with your smartphone. This plugs into your network via its Ethernet port and can be placed on a table or wall mounted. This acts as an internal siren, too.

Of all the smart alarms I’ve seen, Yale is the only company to sell a keypad (£38.57) for arming/disarming. That’s a brilliant way to give access to other people. You can have multiple keypads in your house, say keeping one upstairs for turning on the part-armed mode at night. More convenient for people that live in your house are the alarm key fobs (£25.40). 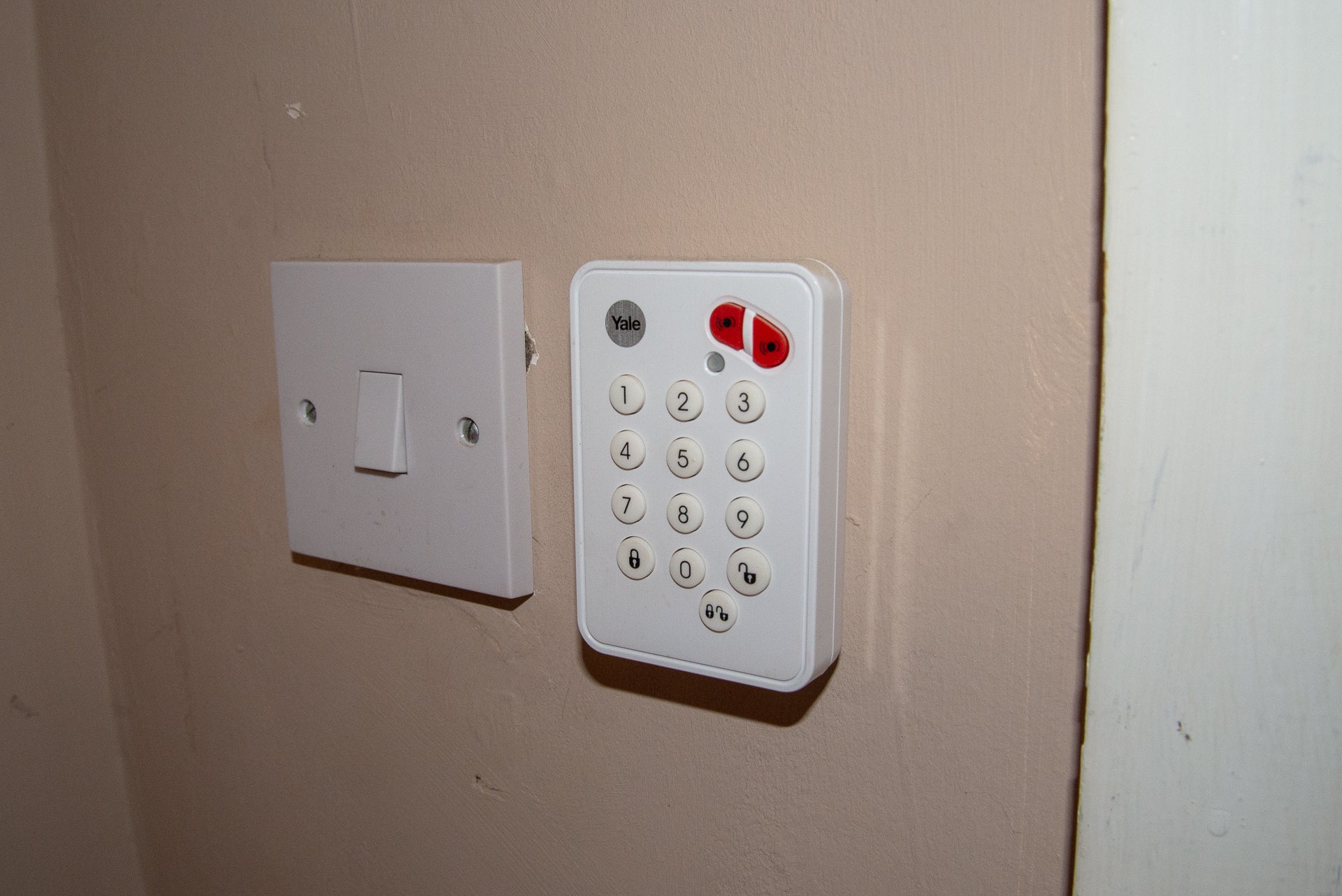 An external alarm box (£70.56) will alert your neighbours that something has happened in your home. Optional dummy alarms(£19.98) are available, so you can keep one at the back of your house to warn away burglars. 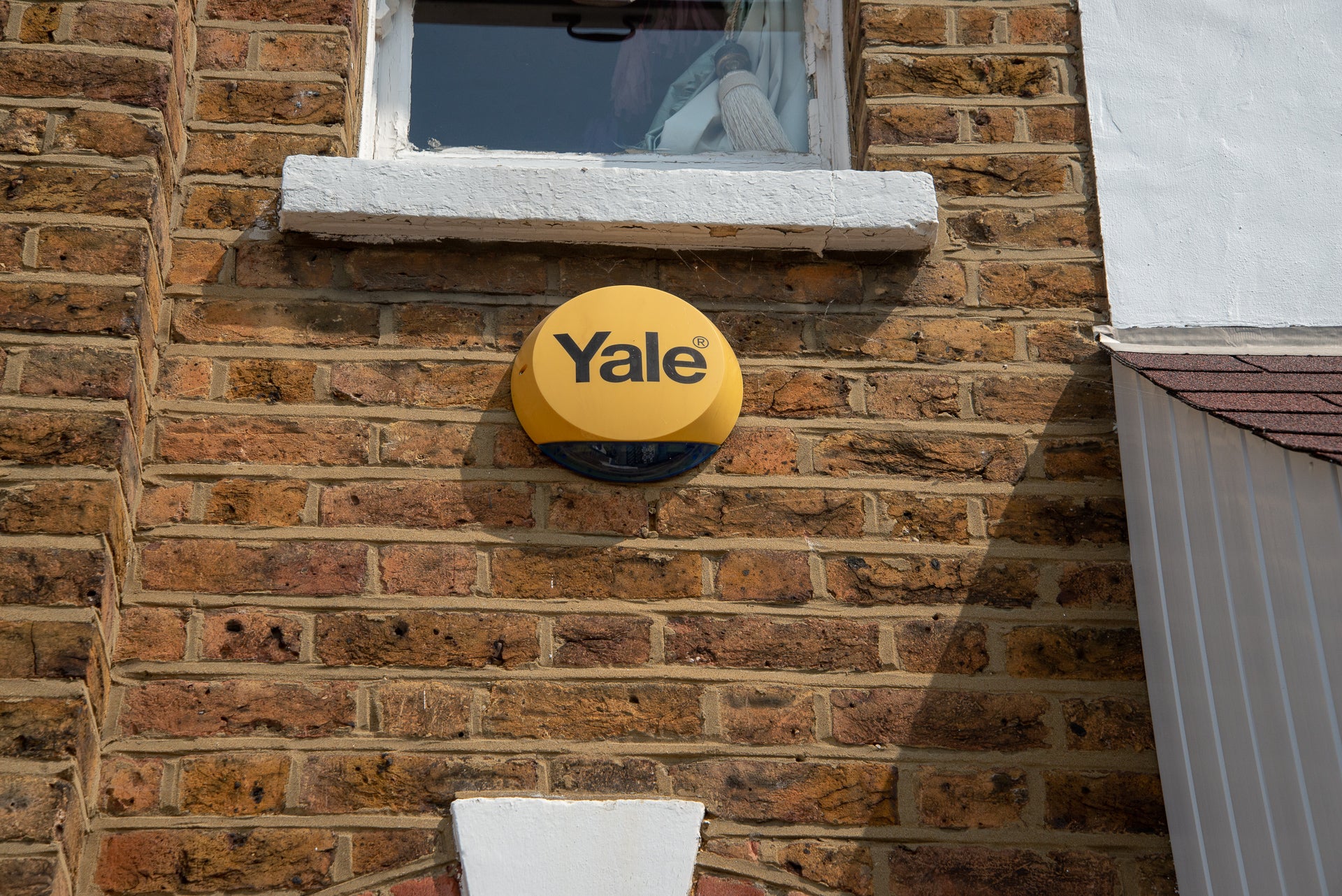 If you’re worried about people getting into your home, there’s a panic button (£22.57), too. One tap of this sets off the alarm, hopefully scaring a thief in the process.

The sensors used for the smart SR range are the same as the ones used in the older ‘dumb’ EF series. That’s good news if you’ve already got a Yale alarm, as you can just add in the hub, replace your old sensors with the new system and turn it into a smart alarm.

While the sensors are all individually well priced, new owners will probably find it better to buy a kit. There are several available, but the Smart Home Alarm Kit (£299.99) is a good starting point. It includes the Hub, a keypad, an external siren, one window/door sensor and two motion sensors.

With older Yale non-smart alarms, installation was fiddly, using the keypad to put the alarm into learning mode and then listening out for beeps as sensors connected. With the Smart Home Alarm, things are a lot easier.

The smartphone app (iOS and Android) takes you through connecting the hub to your router and enabling its battery. With the kit I was provided with, the sensors were pre-paired with the hub so just needed the battery tab to be pulled out to turn them on, and then wall-mount them.

As I had a keypad, the system also asked me to enter a PIN for it. In the app you can create up to 10 PINs, giving different users a different code. The advantage of doing this is that you can then revoke a PIN at a future date, say giving temporary alarm access to builders working on your home. 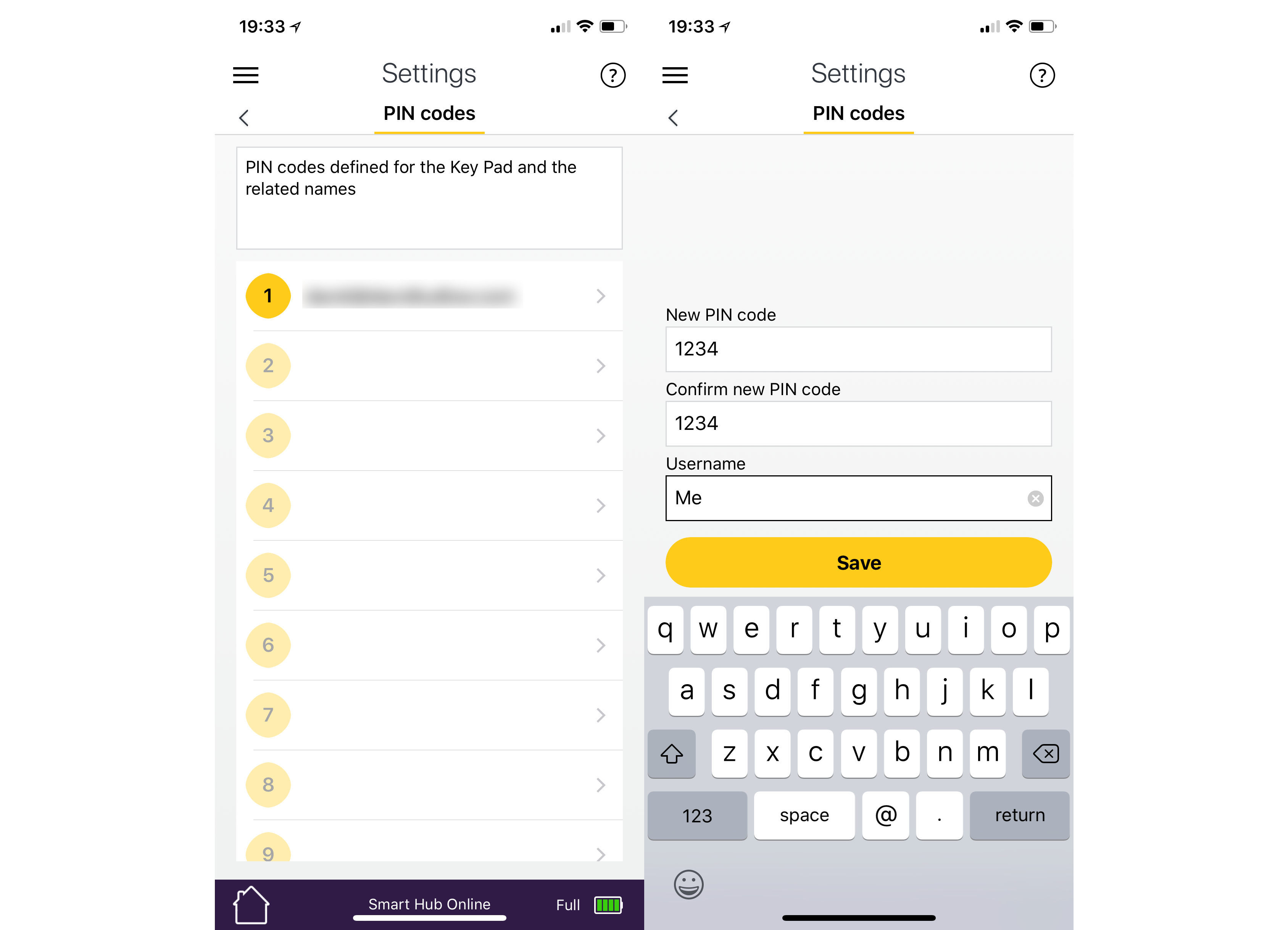 Adding extra devices is easy, too, using the app to put the alarm into learning mode and then using the pair button on the sensor you want to connect to the system.

When the alarm is working, there’s a little more configuration, letting you set how you want the system to work. The main choice comes down to choosing how sensors work in fully armed and part-armed mode. The difference between the two is that the part-armed mode can be thought of as a night mode, letting you protect part of your house while you’re in.

Yale lets you control each device, setting how you want it to operate. There are four main modes. Entry Zone means the alarm going off is delayed in both fully and part-armed modes. This is useful for devices around your front door, as it gives someone time to get in and disable the alarm using the keypad. 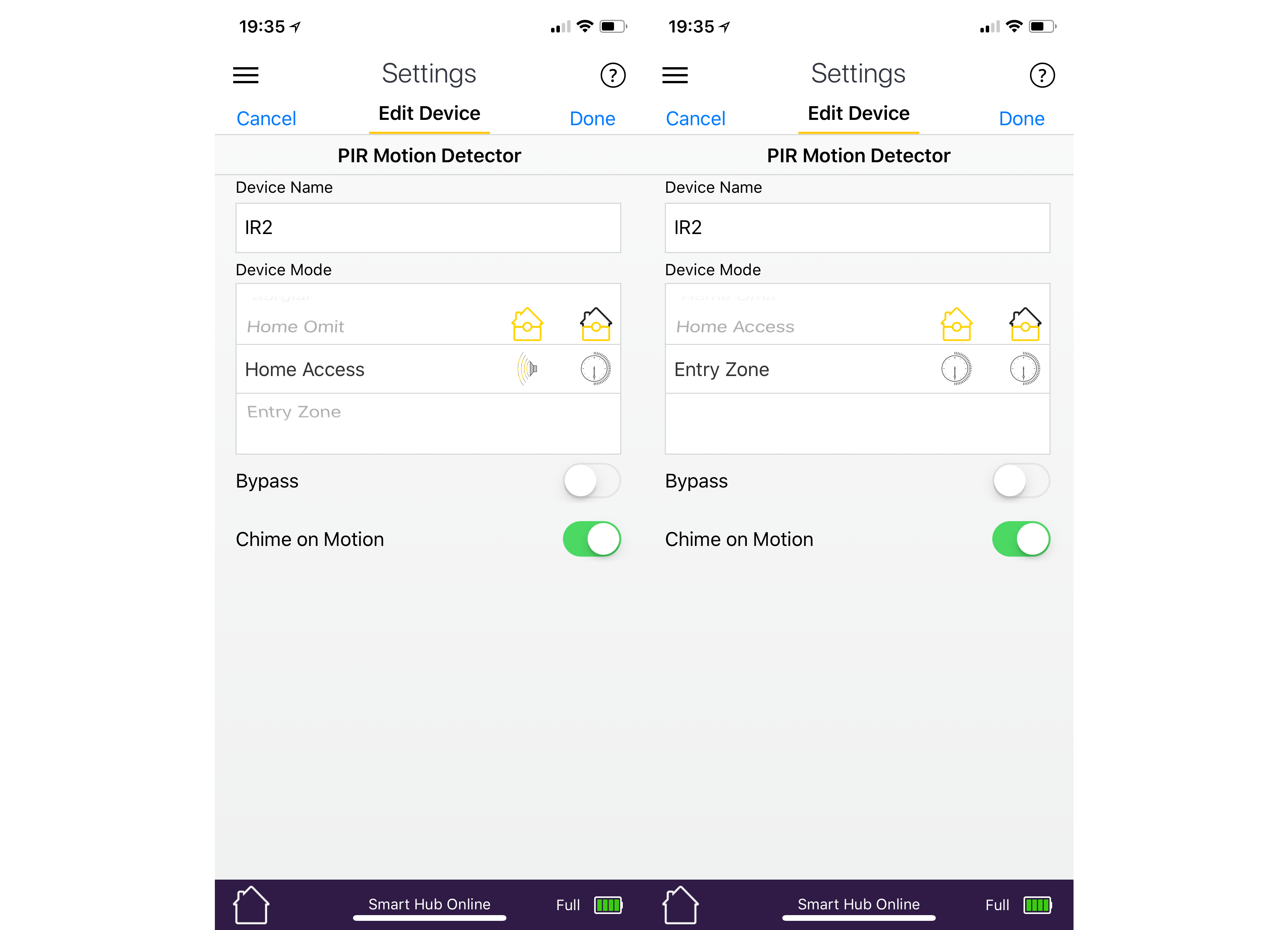 You can also Bypass a sensor completely, which is handy if you have a good reason to temporarily not use a sensor, such as looking after a friend’s pet that may trigger a motion sensor when you’re out.

For both fully armed and part-armed modes, you can set the Entry and Exit Delay in seconds, getting the right mix for where your control panel is in relation to the door.

It’s neat to see the Jamming mode, which looks out for people trying to block the wireless signal and then triggers the alarm automatically.

If you’ve got a Yale Conexis L1 lock, you can fit it with the Yale Module 2. This is neat, as unlocking the door can automatically turn off your alarm. The module gives you remote lock/unlock using the Yale Smart Living app. However, if you install this module, you can’t also have the Z-Wave Module 2 installed, which gives you Samsung SmartThings compatibility.

The one thing that’s missing from the system is an option for cellular backup. While the alarm will work in a power cut or if your broadband has gone down (or been cut), you won’t get smartphone alerts. Given that one of the main benefits of having a smart alarm is knowing what’s going on at home when you’re out, this is a shame. Ideally, Yale should offer a paid-for monthly subscription that includes cellular internet backup. 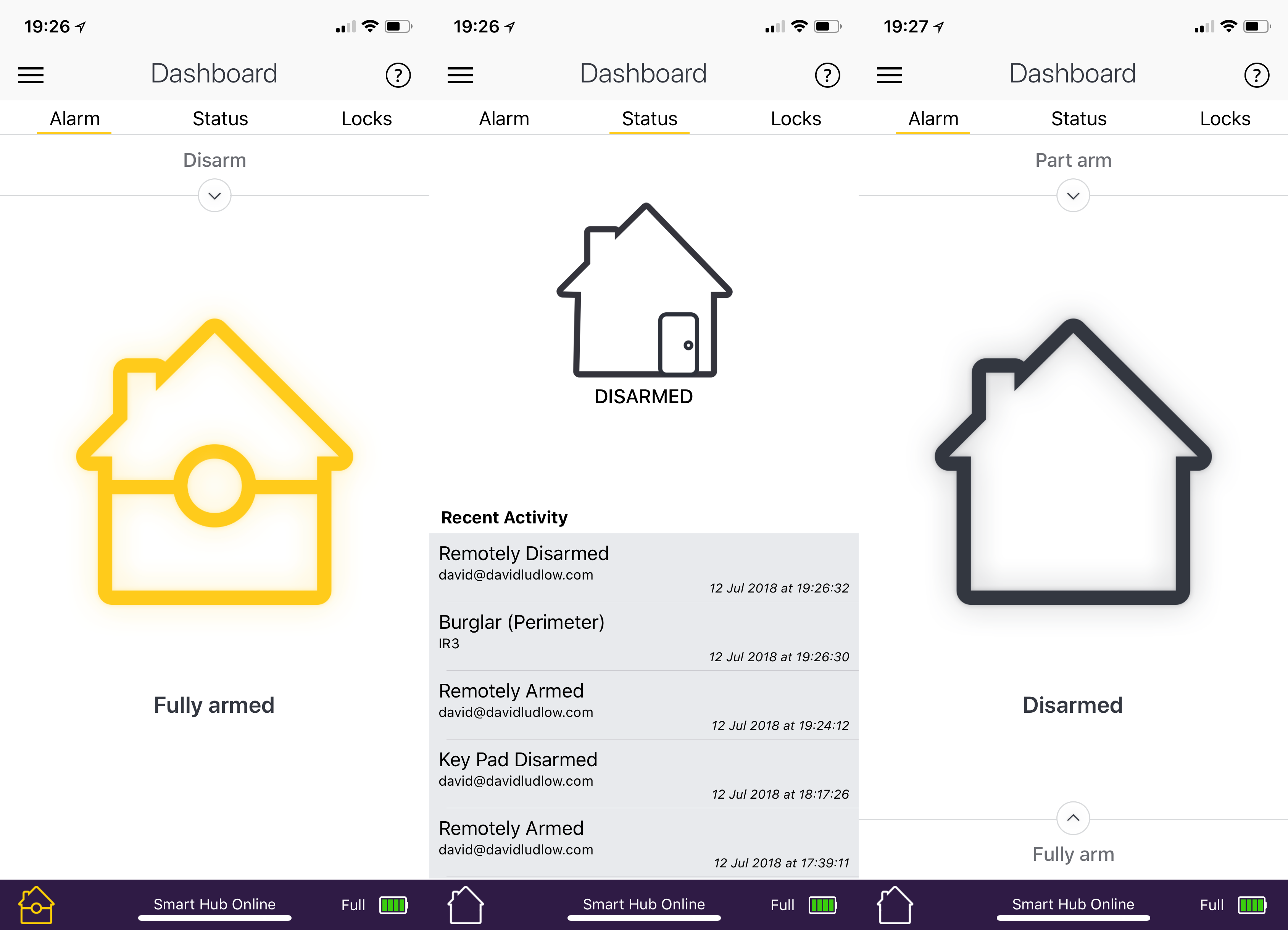 Otherwise, the Yale Smart Home Alarm does a good job. Door and motion sensors triggered quickly, and the alarms (internal and external) are ear-piercingly loud – certainly enough to garner attention. Alerts come through quickly to your phone, via the app, and through email, so you know what’s going on at home.

Having the keypad is neat, too, as it makes arming or disarming the alarm really easy. Arguably it’s quicker than using the smartphone app, although this is handy for remotely arming or disarming your system from practically anywhere in the world. It’s worth thinking about the key fobs, too, as they can make life easier for your home’s main users.

Yale hasn’t yet hooked its smart alarm up to any of the voice assistants. Does it matter? Not so much – given that you’d have to be inside your home to use Alexa to arm or disarm, the other options are easier to use. In fact, the only time that Alexa is useful on a smart alarm is for protecting an outbuilding, so you can disarm or arm remotely.

It would be nice to see IFTTT support, so that the alarm triggering could perform other actions, such as turning on lights.

Surprisingly, there aren’t as many smart alarm systems as you may think, and each has its advantages and disadvantages. The Yale Smart Home Alarm has a huge range of accessories and a decent app that makes configuration and control easy. I love the keypads, which give you a permanent way of arming and disarming, even if you lose your phone or key fob. If the system had a SIM-backed option, then it would be top of my list.

The main competition comes from Honeywell and Y-Cam. The Honeywell Evohome Security has a brilliant range of accessories to equal Y-Cam’s, plus there’s a GPRS SIM-backed option, and its RFID key fobs are a cheap and easy way to give people access to your home without having to remember a PIN. But its app is rather clunky in comparison.

The Y-Cam Protect Alarm has the simplest app and a subscription service that gives you SIM-based backup, plus it’s the only system with Alexa support. However, entry is limited to phones or remote control fobs, and it doesn’t have as extensive a range of sensors.

On balance, Evohome Security is the best option where you want completeness and SIM-based backup. If ease-of-use and the idea of a keypad is more interesting to you, the Yale Smart Home Alarm is an excellent choice. If there was a SIM option it would be perfect.

A huge range of sensors and great app make this alarm a winner.