Update: This review and its score relate to the original proposition. Y-Cam has since discontinued its free cloud storage subscriptions claiming they are financially “unsustainable”.

What is the HomeMonitor Indoor HD Wi-Fi Video Camera?

It’s not hard to fathom what Y-cam’s HomeMonitor Indoor HD Wi-Fi Video Camera does, but there are a few things that make this security camera stand out.

The HomeMonitor HD isn’t a traditional camera in that it doesn’t record continuously. Instead it’s motion activated and stores the video on a password-secured cloud server.

The HomeMonitor HD works over Wi-Fi, but requires a wired connection with the router for the initial setup. We experienced a few problems with this step of the process and despite our technical know-how the camera wouldn’t connect to HomeMonitor’s server. However, an email sent for help was answered within hours and the culprit, a faulty Ethernet cable boxed with the unit, was quickly replaced and off we went. 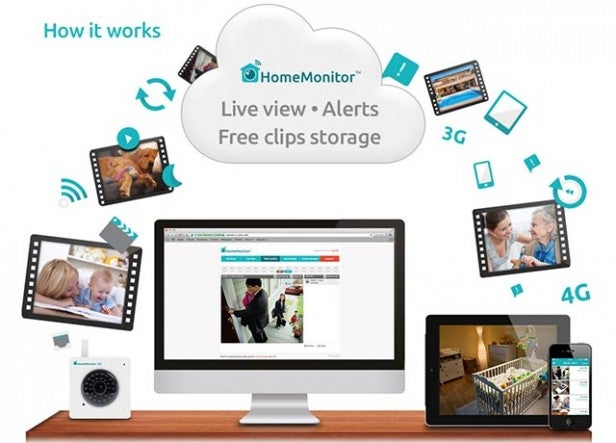 The rest of the software setup is conducted over the HomeMonitor HD’s Y-cam website and took us less than two minutes to get up and running. 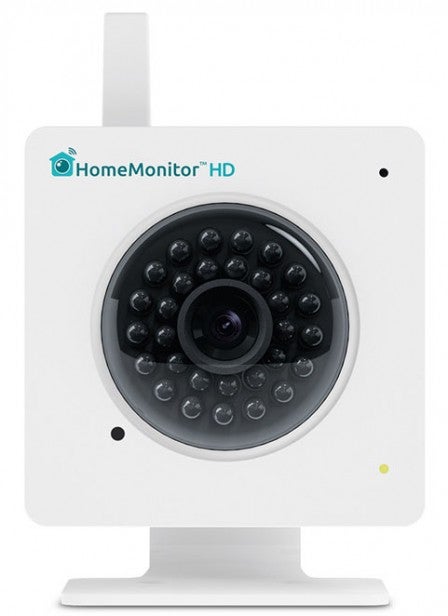 You’ll obviously need a mount to place the camera in the appropriate position and the HomeMonitor HD duly obliges with a sturdy metal L-shaped one. Two screws hold it to your wall – two 1-inch screws are provided, but you’ll need your own wall plugs – and a ball joint allows you to rotate it to the optimal position. The camera and mount together are light, so the supplied screws are more than adequate.

It takes a coin to tighten the ball joint to stiffen the mechanism. It works but we would prefer if it tightened a little more to ensure the camera stays in position. The fact that this is an indoor camera, and therefore not subject to the elements, means this isn’t that much of an issue, though.

Wherever you fix it, you do need to bear in mind that power will be required. A 3m/10ft power cable is provided, but may need to consider an extension cord for extra reach.

Once in place you can check the HomeMonitor’s feed using any web browser. Simply log in to your Y-cam account and you can view the live feed and complete the setup.

The HomeMonitor HD is a motion- and sound-sensing camera, which means – apologies for describing the bleeding obvious – that it only starts recording and sending video and audio to the cloud when it senses movement.

This is a problem if you have pets. A dog or cat can easily set off the motion sensor. To combat this, the HomeMonitor enables you to select “detection zones” – rectangles you can drag to cover the areas you’re most concerned with. For example, if you have it point at your front door you can choose for it to trigger only when something at least two-feet high comes in, while at the same time having another zone covering a front window. Useful stuff, unless you live close to a gang of limbo-dancing thieves. 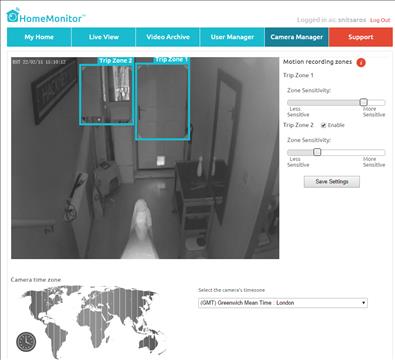 Motion detection is all well and good, but what if something happens in a few seconds, will the HomeMonitor be able to record that? The people at Y-cam have thought of this and have made a camera that is constantly recording on a 10-second loop. If any movement is detected then the HomeMonitor HD sends the footage directly to the cloud, including a few seconds before the trigger event.

You can disable motion control for specific days or hours of the day if you don’t want the camera to record every morning you leave for work.

The HomeMonitor Indoor HD shoots, you guessed it, HD-quality video. It’s not 1080p Full HD – it records 720p through a wide-angle lens and, unfortunately, the quality isn’t great.

Images are a little blurry and overly processed. Videos are compressed to small MP4 files, so a lot of the detail is lost. You can certainly recognise people you know, but it’s a struggle to make out a face clearly if the light is a little dim. That is unless you have some CSI enhancement magic to hand. This isn’t as bad as you might think, though.

The HomeMonitor Indoor HD isn’t really about providing the sharpest picture clarity for video, or creating a perfect mug shot of a burglar. Instead it is an eye on your home, a sentinel that informs you of what is happening in your house – who’s coming in and out. 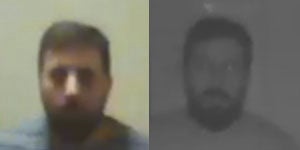 An infrared night time mode provides visual clarity on par with day shooting at up to 15m and means the HomeMonitor works well as a 24 hour security device. We did find that moths or other small flying critters do trigger the camera if they fly too close at night. This only happened a few times during our month of testing so it’s not too much of an issue. I’ve taken a couple of mugshots of myself in well-lit and dark conditions to see the quality.

Watch some sample footage in both light and dark:

Install either the iOS or Android app and you get alerts on your smartphone every time a recording is made. The apps are easy to use and let you access a live feed at any time too. There’s also a comprehensive web app that lets you configure the HomeMonitor HD, set up alerts via email, download recorded videos and watch the live feed. Both the apps and website let you manage multiple cameras, even ones in different locations. 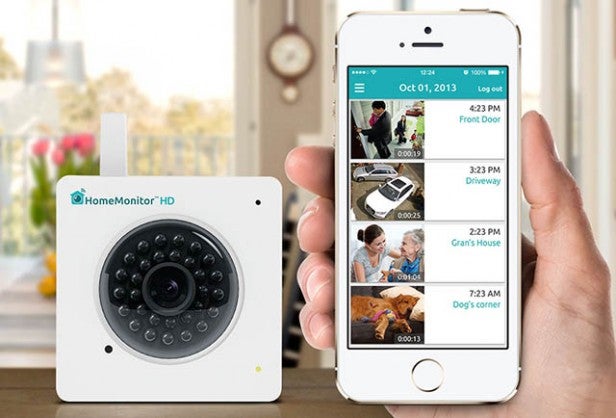 Seven days’ worth of recordings are kept on the cloud free of charge, but for a subscription of £29.99 a year you can extend this to 30 days.

Because all footage is sent to the web, Y-Cam recommends you have an internet upload speed of at least 512Kbps (0.5Mbps) per camera for optimal usage. Not a problem for anyone on fibre optic broadband or decent ADSL, but you might want to check your broadband speed on a speed checker if you know your internet performance is a little slow and you want to use multiple cameras.

Should I buy the HomeMonitor Indoor HD?

The HomeMonitor Indoor HD is a good-quality camera for keeping an eye on your home. If you want 24/7 recording then this isn’t the product for you, but if you’re after peace of mind while you’re out of town or at work then it works a treat. At £150 with seven days of cloud storage included it’s well priced, too.

New products, such as Netatmo’s Welcome camera, look a lot less severe and come with facial recognition to ignore people who are meant to be in the house. These don’t tend to come with cloud storage, though. If you don’t like your security camera to look like a security camera then there are a few options around.

Better picture quality aside, there’s not much more we’d want from the HomeMonitor Indoor HD. It’s a slick and easy-to-use home security camera that’s a great solution for those who want to keep one eye on their home while out and about.