The U706 has a 82Wh battery – high for a gaming notebook – but it’s likely to be hindered by the power requirements of the desktop processor.

The standard test sets the screen at 40% brightness and loops a web browsing and video chat simulation. In Balanced power mode the XMG lasted for three hours and one minute. That falls between rivals: ahead of the Aorus by half an hour, but twenty-five minutes short of the MSI.

Don’t hold out for great gaming longevity. I used High Performance mode with the screen at 100% brightness and ran the Unigine Heaven benchmark, and the XMG lasted for 56 minutes. That’s half an hour behind the MSI. 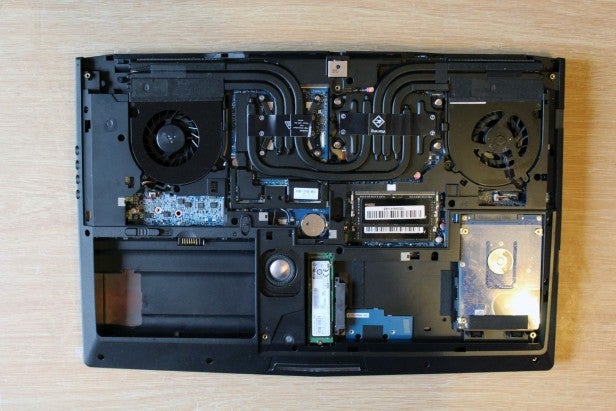 There’s no doubt the U706 can handle any current game at 1080p. Its Battlefield 4 framerate of 60fps is great, and it was better in Bioshock Infinite, where it averaged 69fps. In Crysis 3, the toughest test, it averaged 57fps.

Those scores compare well to the MSI’s GTX 970M. That system could only manage 49fps in Battlefield 4 and 44fps in Crysis 3, although in Bioshock it was two frames quicker.

I’ve got no quibbles with the XMG’s desktop-class Core i7. Its PC Mark 7 score of 7,411 is one of the best I’ve seen, and its GeekBench 3 pace of 13,937 is similarly dominant – only a handful of machines have proved faster. There’s enough CPU grunt to avoid games bottlenecks, and it’s got enough power to handle home and work applications.

It’s also safe to say the XMG will provide more processing power than rivals. It’s certainly faster than the older chips inside the MSI and Gigabyte machines I reviewed last year, and it’ll still outpace the updated mobile chips now inside those laptops.

The storage, too, proved impressive. The Samsung SSD zipped through sequential read and write tests at 1,881MB/s and 1,480MB/s. Both scores are miles ahead of rivals, and far beyond what a conventional SSD will do – and that speed will make itself known during game and system loading times. 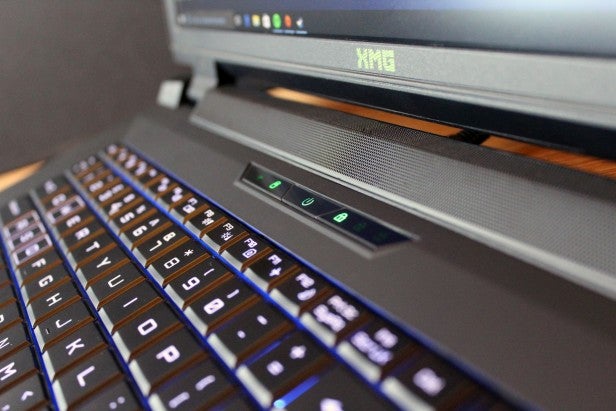 The difference between desktop and mobile components was obvious in stress-tests. The graphics card never caused issues: its idle temperature of 42 degrees is fine, and its peak of 62 degrees is excellent. The processor, however, wasn’t as chilled. Its idle temperature of 48 degrees is higher than I’d expect from a desktop system, and during stress-tests it peaked at 99 degrees. That’s right up against the point at which the chip could become unstable, and it caused speed issues.

The 4GHz part throttled downwards to about 2GHz – a reduction that only reduced temperatures by three or four degrees. The only good thing about this scenario is the U706’s decent heat distribution, which meant that the outside of the chassis never became uncomfortably hot.

It’s unlikely many users will encounter this scenario, as it’s not common for components to run at 100% load for long periods. That said, it’s worth bearing in mind, as intensive processor use could see dips in performance as all that heat builds up.

There’s no noticeable noise when idling, and the fans produced a modest, low sound during stress-tests and benchmarks. My only issue was the occasional whooshes during otherwise-quiet moments.

I normally don’t talk about desktop machines in laptop reviews, but the U706 is unique: it’s got a desktop processor, it weighs nearly 4kg, and costs more than £2,000. It’s clearly designed for lugging to LANs and keeping on a table and near a plug socket. If I was considering a purchase I’d be remiss if I didn’t consider desktop alternatives.

One of the best recent examples of a small desktop is the Chillblast Fusion Fury Nano, which includes the same CPU as the XMG alongside an AMD Radeon R9 Fury Nano. It’s all inside a Raijintek case that’s 190mm wide and just 254mm tall.

The Chillblast’s overclocked processor is faster than the XMG, and Its AMD graphics scored 88fps and 92fps in Battlefield 4 and Crysis 3. The Chillblast costs £1,655 – so I could buy the PC, peripherals and a monitor, use the rig for LAN parties, and have hundreds left for games.

There’s never an easy answer when choosing between a hefty gaming notebook and a similarly-specified desktop, but it’s worth considering all the options – I know that if I were spending money on a machine to use at LANs and at my desk, then a desktop makes more sense for benchmarks and my bank account.

All that said, there is still a level of compactness and portability to the U706 that a desktop PC can’t match, however small. 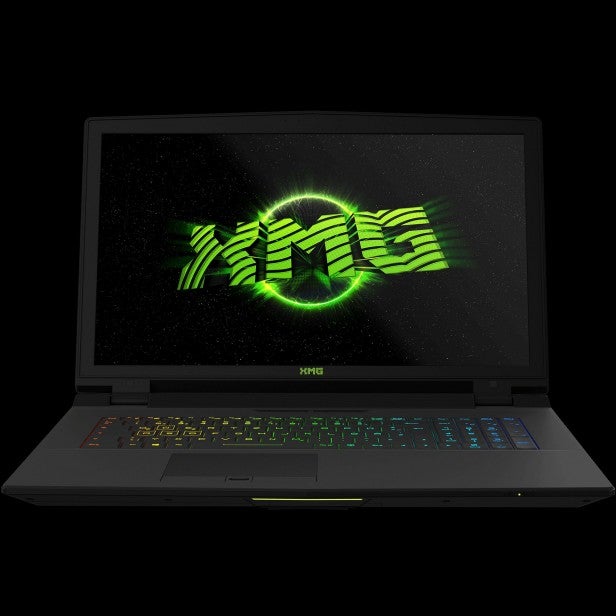 XMG has designed the U706 as its ultimate gaming notebook, and in some respects it nails its remit. The GTX 980M has huge speed, a desktop-level processor, and great components throughout. The screen is excellent, the chassis is rock-solid, and the speakers impress. It’s also got Nvidia G-Sync, which smooths gaming in every title.

In other areas, though, the issues are obvious. It’s huge and heavy, and battery life is poor. The price is stratospheric. It’s a little pricier than the latest Aorus, which has two GTX 970Ms, but hundreds more than the current MSI GS70.

The U706 is fast and impressive, but I’m still questioning its worth. Cheaper small desktops offer more power inside cases that can be carried to LANs, and many slimmer, lighter and cheaper laptops can easily handle 1080p games, albeit without G-Sync.

XMG’s latest laptop leads its class in terms of its benchmark speed, and its screen, speakers and build quality all see it head to the top of the notebook market. In other areas, though, it’s poorer: battery life is disappointing, it’s huge and hefty, and it’s disarmingly expensive. It’s a knockout gaming laptop, sure, but small desktops and cheaper, slimmer notebooks are alternatives that many should explore.