Most firms only produce gaming laptops alongside other products, but XMG puts these machines front-and-centre. Its latest system is particularly special: the U706 is from the “Ultimate” series, and it’s the range’s 17.3-inch flagship.

An “Ultimate” gaming laptop could go down one of two paths: it could be slim, light and with a keen balance between performance and battery life, or it could be a machine that’s bigger, faster and bolder than any rival. XMG has unashamedly chosen the latter option.

This 17.3-inch machine is huge: it’s 39mm thick and 418mm wide, and weighs 3.9kg. Those figures are significant. A large bag will be needed to carry the XMG to LAN parties, and you’ll probably need to hit the gym to find the strength to lug it around. It could also make this machine uncomfortable for sofa gaming.

The back-breaking dimensions are accompanied by unfussy design. The lid is matte plastic with a barely-visible glossy XMG logo. The interior has a thick speaker grille above the green power button. Below is the keyboard, topped with angular, futuristic letters, and then the wrist-rest: matte, divided by the plain touchpad and decorated by stickers. 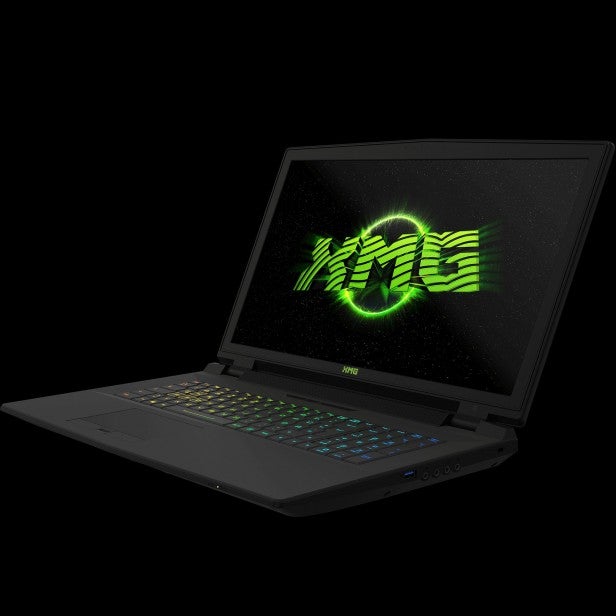 The XMG’s sheer heft means it’s built like a tank. There’s no weakness: the wrist-rest doesn’t budge, the metal beneath the keyboard is rock-solid, and the screen barely moves – and when it does flex, there’s no on-screen distortion.

The U706’s rivals are vastly different. The MSI GS70 2QE Stealth Pro is made from red aluminium and is adorned with MSI’s extravagant Gaming Series logo – and its keyboard glows with multi-coloured illuminations. Gigabyte’s Aorus X7 v2 is made from matte metal and has a slimmer, dramatic design.

The MSI is just 21mm thick and weighs 2.66kg. The Gigabyte is 24mm thick and tips the scales at 3kg. That means both are more manageable than the XMG, especially when it comes to transport.

The U706 matches its size with versatility. Two base panels slide free to unveil the interior, and every component is accessible. The two memory sticks, SSD and hard disk are easy to remove, and the chunky heatsinks can be eased free. There’s a spare 2.5-inch bay, although the Aorus has more upgrade room.

The versatility continues on the outside, with plenty of ports. It’s got five USB 3.0 connections, a USB 3.1 Type-C plug, eSATA, an HDMI output, two DisplayPort 1.2 connectors and a card reader.

It’s no surprise that this “Ultimate” machine houses spectacular components. The most striking is the processor: a Core i7-6700K. That’s a desktop chip, and it’s one of Intel’s most potent parts: it uses the Skylake architecture, it has four Hyper-Threaded cores, and its 4GHz base clock boosts to 4.2GHz.

It’s a long way ahead of current iterations of the XMG’s rivals. The latest MSI GS70 notebooks have the i7-6700HQ. That still has four cores, but it’s a mobile part that runs at 2.6GHz with a Turbo maximum of 3.5GHz and a smaller cache. The priciest current GS70 costs a more modest £1,400.

The latest version of the Aorus looks poorer. The most powerful CPU inside those machines is the Core i7-5850HQ, which relies on older Broadwell silicon and tops out at 3.6GHz. 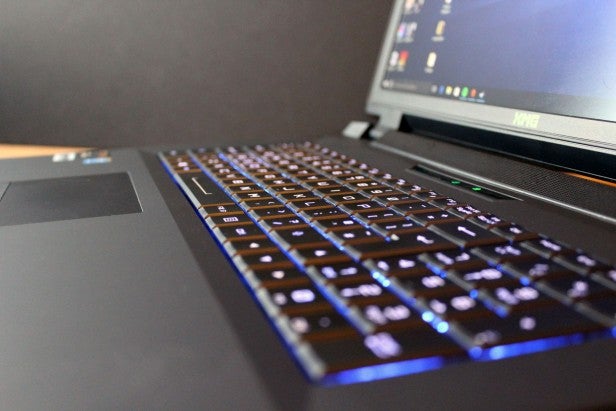 The U706’s graphics core is just as impressive. It uses the GTX 980M, which is Nvidia’s best mobile GPU. It has 1,536 stream processors, a core clock of 1,038MHz, and 8GB of GDDR5. It’s similar to the desktop GTX 970, albeit with one streaming multiprocessor disabled.

This machine also has Nvidia G-Sync. This technology reduces image tearing and lag by synchronising the screen’s refresh rate to the rate at which frames are churned out by the graphics card.

The best GPU in any iteration of the MSI GS70 remains a GTX 970M. The Aorus machine I reviewed had two GTX 860M cores, but now top models have dual GTX 970M cores and it costs around £2,100.

In other areas the XMG impresses. The boot drive is a 512GB Samsung SM951 M.2 SSD that uses PCI-Express bandwidth for extra speed, and there’s a 1TB hard disk. There’s 16GB of memory, and Killer Gigabit Ethernet and dual-band 802.11ac WiFi. Both of the networking options are optimised for gaming.

XMG offers vast customisation: four processors, two GPUs, twelve memory configurations and fifteen different SSDs can be fitted to the U706. The most affordable version costs £1,425 with Windows 10, and it’s got a Core i5-6600 processor, a GTX 970M GPU, 8GB of memory and a 500GB hard disk.