What is the Xiaomi Yi?

The Xiaomi Yi is a dashboard camera at an unbelievably low price. Costing less than £60, it’s incredibly cheap in its class, where alternatives such as the Garmin Dash Cam 35 or RAC 05 GPS are more than twice as much. So what’s missing from the Yi to make it so competitively priced, or is it just the Chinese manufacturing and branding?

If you’ve heard of Xiaomi before, it will almost certainly be for its amazing-value smartphones, such as the Mi4C. However, the company has also branched out into an action camera – which, confusingly, is also called the Yi – and now the dashboard camera on review here.

It’s available in two colours: grey or gold. I was sent the latter, but the former might be less likely to draw attention if you plan on leaving the camera in your car unattended. The body is a little plasticky, but the bundle overall doesn’t feel particularly cheap.

The Yi comes in a reasonably sturdy box, which certainly makes a decent first impression. Apart from the camera itself, which is approximately GoPro-sized, there’s a long USB cable you can route round your windscreen, a suction mount and a non-captured power adapter. The latter is a particularly pleasing addition since it offers two USB ports, so you can power the Yi and your sat-nav from it at the same time – assuming the latter also uses a non-captured car power cable. 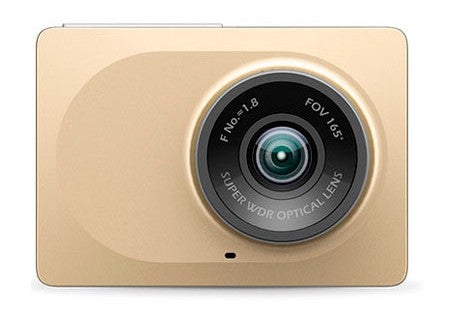 My sample unit, sent directly from China, also came with a 16GB microSD card in the box, but it looks like this isn’t included in the bundle supplied by UK vendors. Still, the Yi is so cheap you could add a sizeable memory card and still be half the price of the competition.

The windscreen mount is designed to hang down from the top of your window, as with most dashboard cameras. There are no fixings supplied for routing the power cable around the screen to stop it blocking your vision, though, so you’ll need to supply this yourself. I found that the suction mount wasn’t particularly effective. The camera kept falling off the windscreen during testing, which is a drawback for a device meant to provide a record in the event of an accident.

However, it’s as soon as you start using the Yi that the biggest downside shows itself. The menu is currently available only in Chinese. Initially, I thought this was because I had a unit directly from China, but further investigation revealed that units purchased in the UK will suffer the same drawback. Unless you can read Hanzi characters like a native, you’ll struggle to understand the menus.

This could be a serious deal-breaker, and may well put off many in the UK from purchasing the Yi. However, since a dashboard camera is essentially a plug-in-and-forget device, the Yi retains the potential to fulfil its role – although some of the more advanced facilities will be difficult to use, including the smartphone app, of which more later. 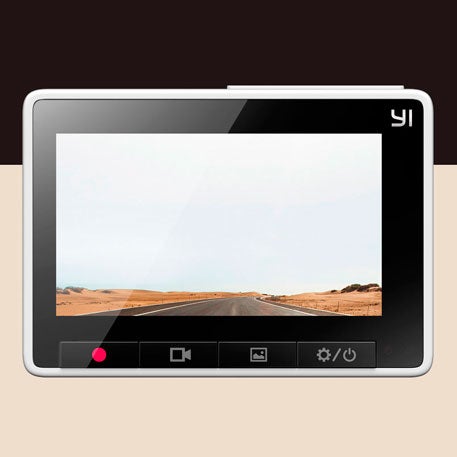 Fortunately, Western numbers are still used for recording resolution options, for example, so you can set these reasonably easily. The GearBest website listing also has a handy graphic that shows what the various menu icons mean. The menu is accessed via the 2.7-inch, 426 x 240-pixel screen, which is a reasonable size for a dashboard camera, using four buttons along the bottom.

Another major omission, following the lack of English language support, is a built-in GPS. This is likely to be one of the main reasons why the Yi is so much cheaper than its competitors.

Your location isn’t recorded alongside the video, which will make its use as evidence in an accident a little more problematic. There is a G-sensor with three levels of sensitivity, which will store the current video recording in a special location on the memory card if it believes you’ve had an accident – or if the device has just fallen off the windscreen…. 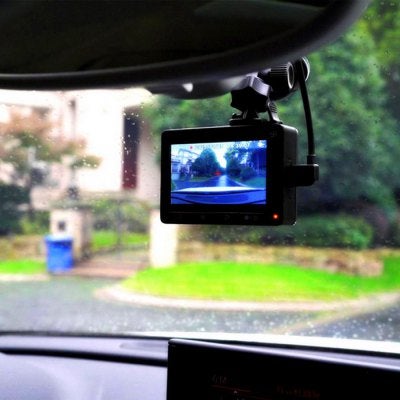 Like a number of dashboard cameras on the market, the Yi also includes additional safety features, which it is calling Advanced Driver Assistance Systems (ADAS). These include a lane-departure warning system (LDWS) and forward-sensing system (FSS).

LDWS proved pretty effective during testing, correctly detecting lane changes on the motorway, but FSS was overzealous, sometimes warning me of impending collisions when there was clear road ahead. Enabling ADAS means you can shoot only in Full HD at 30 frames per second, not the other two options.

The first thing you see when you turn on the Xiaomi Yi is a QR code that leads you to installing the smartphone application. Amazingly, considering the price, the Yi has built-in Wi-Fi, so you can connect to it wirelessly to trigger playback and configure settings.

Unfortunately, like the camera itself, the app is in Chinese only – although the app for Xiaomi’s action camera is available in English, so I’d hope the dash cam one would follow suit eventually.

There’s no specific desktop software for the Yi, and in fact when you connect it to a computer via USB, it doesn’t appear to show up as an external storage device (unless this is something I missed because I can’t read Chinese). You can plug the memory card directly into a computer to view or copy footage, however. There’s no HDMI or other video output on the device itself.

Unfortunately, image quality really isn’t that great. You have to be quite close to vehicles to read their number plates. There are obvious signs of compression artefacts, and a generally soft look. It isn’t the worst I’ve seen, and it’s certainly okay for the money, but this isn’t an area where the Yi punches particularly above its bargain-basement price.

Should I buy the Xiaomi Yi?

The Xiaomi Yi Car WiFi DVR is temptingly cheap. If you’re willing to forego trying to understand what the camera and smartphone app menus are saying, or can read Chinese, it’s great value. Even though video quality isn’t particularly stunning, this may be enough for your needs, and the lane-departure warning works quite well. The rather ineffective suction mount is a bit of a worry, however.

The Xiaomi Yi is an unbelievably cheap dashboard camera, although the current Chinese-only menu will put off many.

Thanks to GearBest for supplying the Xiaomi Yi used in this review.