What is the Xiaomi Redmi Note 3?

The Redmi Note 3 is the latest large-screen, low-cost phone from Chinese handset maker Xiaomi – the company often referred to as “The Apple of the East”, thanks to its dominant position in that particular part of the world.

The company’s Redmi Note series has traditionally been focused at the low end of the market – even more so than Xiaomi’s other astonishingly good-value offerings, such as the flagship Mi5 series. However, it offers premium features such as metal bodywork, a fingerprint scanner, 5.5-inch IPS screen and a surprisingly fast octa-core MediaTek Helio X10 processor – all for around £130 for the base model.

The Redmi Note 2 was certainly no slouch when it came to build quality, but it was still an all-plastic phone and felt a little cheap when set alongside Xiaomi’s other handsets, such as the sleek Mi4. The Redmi Note 3 doesn’t leave anything to chance and comes equipped with a robust metal chassis that gives the entire handset a pleasing feel of weightiness.

It isn’t entirely made of metal, though – the top and bottom edges are plastic, which blend in seamlessly with the rest of the design – but this definitely feels like it’s in a class above most budget blowers. The construction is also rock-solid, with no noticeable movement when gripped tightly 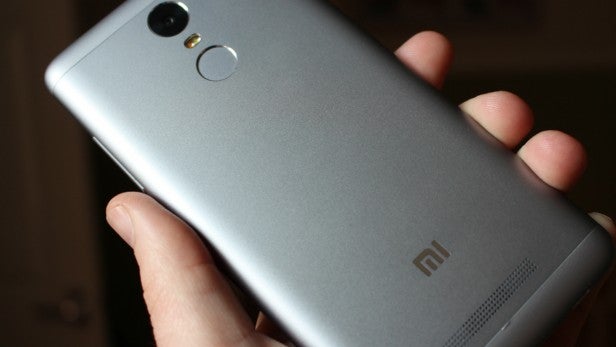 The rounded edges make the Redmi Note 3 comfortable to hold, and this is accentuated by the fact that Xiaomi has clearly put a lot of thought into ergonomics and what should go where.

The power and volume controls are on the right-hand side, falling just under your thumb. However, the real star here is the fingerprint scanner, which resides on the rear of the device, just below the 13-megapixel camera. It’s the same location that LG chose for the scanner on both the Nexus 5X and LG G5, and is almost effortless to reach.

In fact, the moment you scoop the phone up off a table or lift it out of your pocket, your index finger naturally comes to rest over the scanner, allowing you to wake the phone and unlock it in one movement. The downside of having the scanner on the back of the phone is that you can’t access it when the handset is resting on a table, face-upwards.

Along the top edge of the Redmi Note 3 you’ll find the 3.5mm headphone socket and an IR blaster, something that’s quite common on phones intended for the Chinese market. While it might seem like a throwaway addition, being able to change TV channels or adjust the volume on your stereo using your phone never becomes old and I’d personally like to see it featured on more handsets.

On the bottom edge of the handset you’ll find the micro-USB charging and data port sitting alongside the in-call microphone. While Xiaomi has embraced USB Type-C with its Mi4C and Mi5, the Redmi Note 3 sticks with the older connection standard – just like Samsung did on its Galaxy S7. 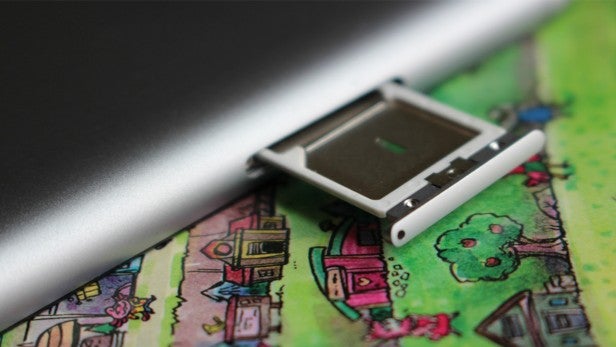 Sadly, there’s no NFC included here, even though Xiaomi has recently changed its previously dismissive stance on the technology by bundling it with the Mi5. As a result, you won’t be able to use the phone to make contactless payments using Android Pay, which recently launched in the UK.

The Redmi Note range – as the name suggests – traditionally guns for the “phablet” sector of the market, and this third offering is no exception. It’s sporting a large 5.5-inch IPS screen with a 1,920 x 1,080 resolution – hardly earth-shattering, but still more than acceptable in a phone that costs this little. The pixel density of 403ppi is decent as well, and it isn’t possible to pick out individual pixels unless you press your nose up against the glass. 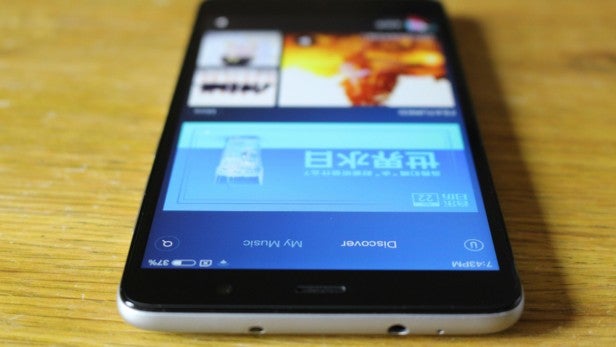 Colour replication and contrast could actually be a little better in my opinion – unless the screen is at a reasonably high brightness level, things tend to appear a little washed out – and it’s sometimes hard to see in really bright sunlight.

The screen isn’t clad in Corning’s Gorilla Glass either, but Xiaomi insists it has used a glass that offers the same level of protection – and even ran a car over a Redmi Note 3 to prove it.

The Redmi Note 3 is available in two flavours – the MediaTek Helio X10 version and the more recent Qualcomm Snapdragon 650 version. The version I have for review is the former. You also have different storage options, with the 16GB edition shipping with 2GB of RAM, while the roomier 32GB version has 3GB of RAM.

MIUI is a surprisingly fast UI, but even so, the MediaTek processor copes admirably under heavy load. Even with multiple apps running simultaneously, I didn’t experience any stutters or jerkiness – although there were times when a “Just a sec” message would appear, which suggested that the handset was having to re-load the Home menu after some intensive work.

Like many Xiaomi devices, the Redmi Note 3 comes with various modes that are intended to conserve battery life, and switching to the more demanding “Performance” mode naturally delivers more impressive results at the expense of stamina. 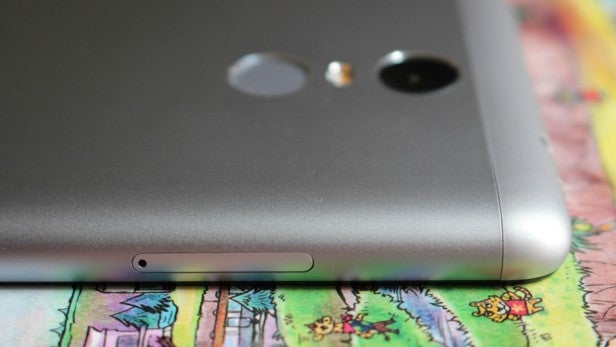 According to the Geekbench 3 benchmark – which I ran in “Performance” mode – the Redmi Note 3’s multi-core rating is 4,658, outranking the Samsung Galaxy S6, which achieves a score of 4,108. In Geekbench’s single-core test, the phone is more in line with the original Nexus 5. The relatively low screen resolution certainly helps, but Xiaomi’s handset is clearly no slouch when it comes to overall performance.

The Redmi Note 3’s speaker is located on the rear of the phone and is reasonably loud and easy to hear, even in a crowded environment. There’s the usual lack of bass that one associates with mono phone speakers however, and the audio is quite tinny and unpleasant at times. There’s a little raised piece of plastic next to the speaker, which – when the phone is face-up on a flat surface – ensures that the speaker isn’t muffled or covered.

Call quality is decent, with audio coming across crystal-clear. A noise-cancelling mic is located on the top edge – next to the 3.5mm headphone socket – and keeps background audio to a minimum, while the placement of the phone’s mic on the bottom-left edge means that it’s unlikely to be obscured by your hand in the middle of a call.

The Redmi Note 3 supports 4G networks, but only bands 3 and 7 in the UK. That means if O2 is your network provider – or you use a company that uses O2’s masts, such as Giffgaff – then you’ll be limited to 3G. Like a number of Chinese handsets, the device offers dual-SIM support, although it should be noted that it uses micro-SIMs; not the more recent nano-SIM format.

Xiaomi’s phones are all based on Google’s Android OS, but they use a custom skin that is perhaps one of the most drastic examples in the Android sector. MIUI bares many visual similarities with Apple’s iOS, and even goes as far as completely removing the trademark Android app drawer, instead placing all of your available apps on your homescreen. MIUI version 7 comes loaded on the Redmi Note 3 and is based on Android Lollipop.

However, Xiaomi has put in a lot more effort than most hardware makers, ensuring that MIUI offers something a little different to stock Android.

For example, you can turn on a feature in the OS that gives you a different lockscreen wallpaper each day. It’s also possible to download and install various themes to make your phone’s menu system look entirely different – other Android phones have this feature, but not to the stunning degree seen here; there are literally thousands of themes to choose from, some of which include animated lockscreens.

There are plenty of other little improvements and enhancements, too, which make the Redmi Note 3 feel very different from your typical Android device. 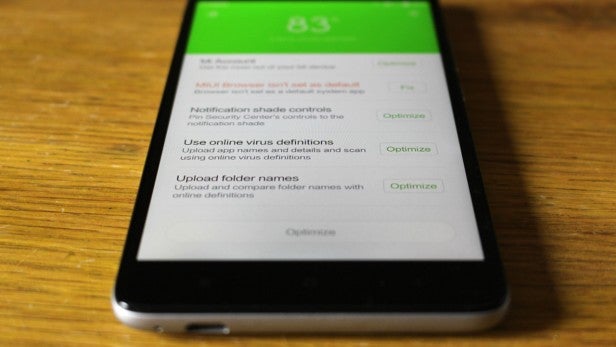 Since it isn’t intended for sale outside of China, the Redmi Note 3 doesn’t come with any Google applications as standard – turning it on for the first time doesn’t prompt you to input your Google account details, but instead asks for your “Mi Account” – Xiaomi’s own login system.

This is backed by a suite of features including a fully fledged app store (in Chinese), a backup tool and even cloud storage allocation. Many resellers will install Google apps on Xiaomi devices, but these “custom” ROMs often come with annoying bloatware as well.

While the “stable” build of MIUI that shipped on our review unit has full English language support, Xiaomi does offer “global” ROMs for its devices that feature Google apps and more language options – but updating your phone is more cumbersome than it needs to be, with a bootloader unlock request being required before you can flash any new software.

MIUI is one of the most recognisable and appealing Android skins out there, but you should be aware that it’s a bit of a minefield if you’re using the phone outside of China. You may have to put in a lot of effort to get things working to your satisfaction, but as the thousands of Xiaomi fans outside of China will tell you, it’s more than worth the hard graft.