What is the Xiaomi Redmi 5?

Chinese manufacturer Xiaomi has long been famed for its ability to disrupt the accepted order of the smartphone market with powerful, well-built handsets that don’t break the bank. But until very recently, it has focused its business almost exclusively on Eastern markets.

In 2017, however, the company confirmed that it’s following in the footsteps of Asian rivals such as Huawei and Asus by expanding into the West. The recently launched Redmi 5 (and its bigger brother, the Redmi 5 Plus) is a solid candidate for release outside of Japan.

It boasts an 18:9 aspect ratio screen, Octa-core chipset, 3GB of RAM and a 12-megapixel rear-facing camera, all powered by Android Nougat with Xiaomi’s custom MIUI 9 skin sitting on top. While it isn’t officially available in the UK at the time of writing, you can order the Redmi 5 from online stores such as Gearbest for around £130.

Xiaomi can hardly be accused of jumping on the 18:9, big-screen bandwagon – the company virtually created the market with the Mi Mix, which has since been supplanted by 2017’s Mi Mix 2. However, the Redmi 5 is clearly designed to cash in on this new craze by offering a huge, face-filling display at a budget price.

The Redmi 5’s 5.7-inch IPS screen fills the front of the phone, with small bezels at the top and bottom. This gives the handset a tall profile, making it comfortable to hold and use. Above the screen you’ll find the 5-megapixel selfie cam and ambient light sensors, as well as the in-call speaker. 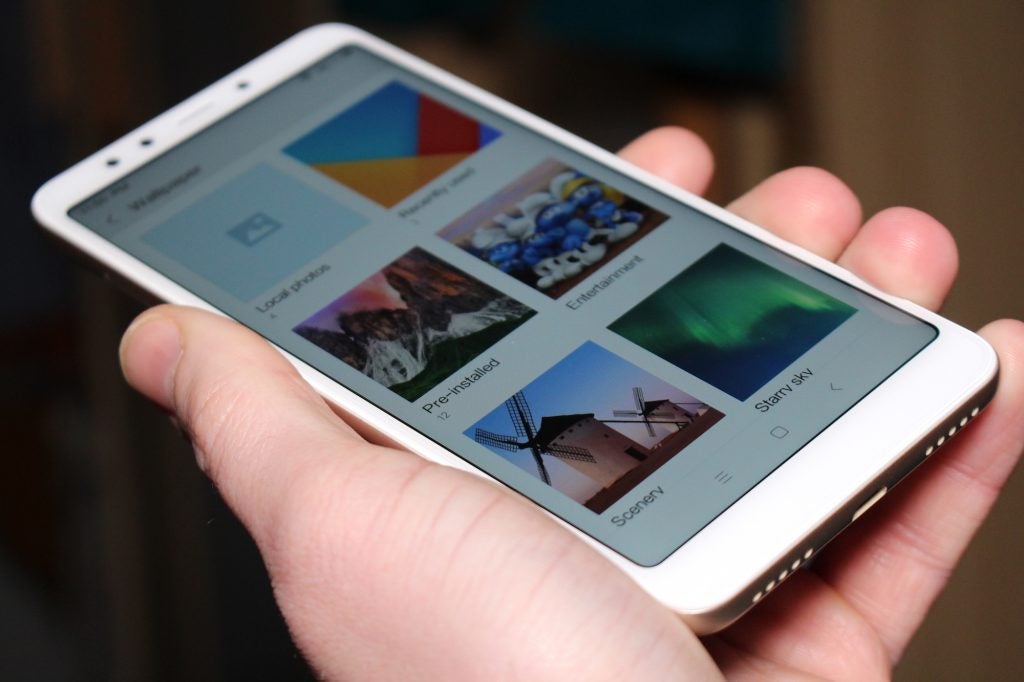 The 2.5D Gorilla Glass screen sits on top of a part-aluminum, part-plastic frame. The rounded edges are made from plastic too, as are two small sections at the top and bottom of the back section, which allow the antenna to function.

The majority of the phone’s rear is metal, and houses the 12-megapixel camera, LED flash, fingerprint scanner and ‘Mi’ logo. The right-hand edge of the unit features the power and volume buttons, while the dual nano-SIM tray is found on the left-hand edge.

On the of top of the device you’ll find the IR blaster – which allows the Redmi 5 to control certain electronic devices, such as TVs – as well as the 3.5mm headphone socket. At the opposite end there’s a single speaker and a micro-USB port for charging and data transfer; strangely, Xiaomi has decided against using the more advanced USB Type-C standard here. 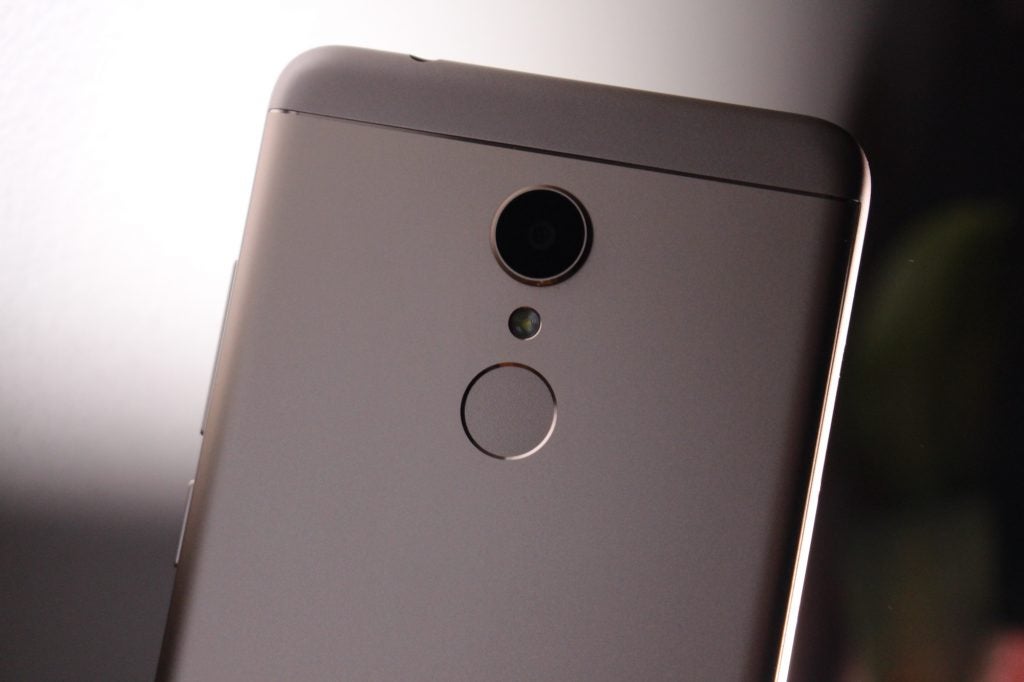 The colour options are black, gold, light blue and rose gold. As you can see from the photos, we had the gold version; the metallic look is rather fetching. Sadly, there’s no water or dust protection.

Xiaomi has kindly included a thin silicone case in the box, but you may wish to upgrade to a beefier case if you’re concerned about damaging the unit.

The Redmi 5’s IPS screen is good for the price, but some colours do look slightly washed out. Also, when viewing from an angle, the display looks noticeably dimmer.

Also an issue is that it’s a 720p panel spread across 5.7-inches, which means pixels are clearly visible, even if you don’t have your nose all the way up to the glass. 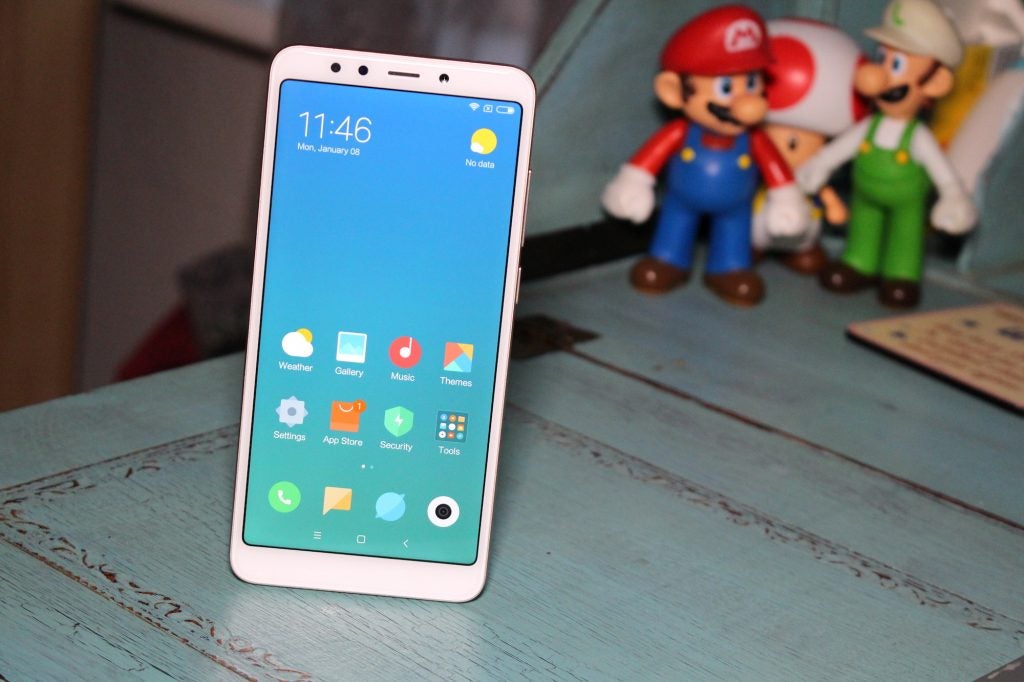 The larger – and more expensive – Redmi 5 Plus has a 1080p screen, so if pixel density is a priority for you then you’d be better off opting for that model instead.

Unlike many other Chinese OEMs, Xiaomi uses quite an extreme UI skin on its Android phones. In the past, MIUI has been compared to iOS, and aims to combine the flexibility and customisation of Google’s OS with the slick, uniform design of Apple’s software.

MIUI 9 is the latest refinement of this UI and comes pre-loaded on the Redmi 5 (the Mi Mix 2 launched with the previous edition). However, MIUI 9 is still sitting atop Android Nougat; it will most likely be updated to Oreo sometime in 2018.

Even if you’re used to Android skins such as Samsung’s TouchWiz and HTC’s Sense UI, you may find MIUI to be something of a shock – especially if you’re importing the Redmi 5 direct from a reseller in China. The model reviewed here has no Google apps installed at all – they’re not loaded on Xiaomi handsets sold in its homeland – and a lot of pre-installed programs are aimed at Chinese users. 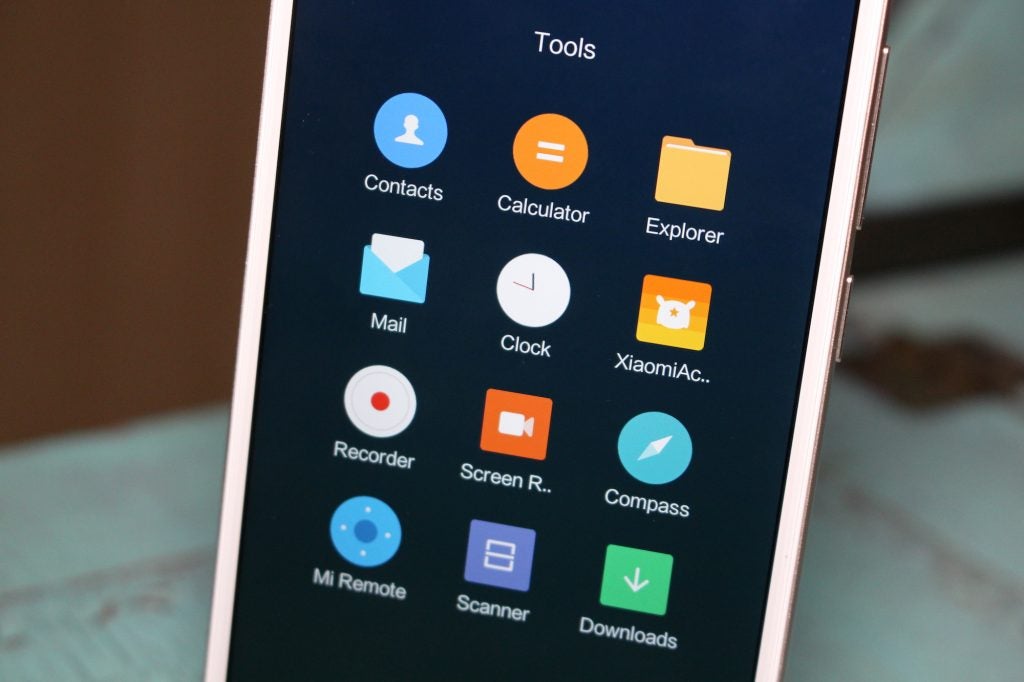 It’s possible to set the phone’s system language to English when you first turn it on, but elements of the UI – such as the keyboard – still showcase some Chinese characters.

You’ll have to create a ‘Mi Account’ to access Xiaomi’s app store, where it’s possible to download an installer that makes your phone Google-ready, along with apps such as Gmail, Google Photos and Google Music. It takes only a short while to get the phone up to speed, but it may be too much of a hassle for casual users, so keep this in mind before importing.

Once that’s out of the way, MIUI 9 has plenty of decent features to offer. Swiping to the right from your main homescreen brings up a series of info panels that display shortcuts to recent apps, the number of steps you’ve taken and your upcoming events.

It’s also possible to randomise your lockscreen wallpaper using a built-in carousel option, which pulls high-quality images from Xiaomi’s own servers. The phone’s built-in security app monitors for suspicious activity, allows you to clean unwanted files, and even set up a ‘second space’ that allows you to have more than one instance of the same app installed on the device. Furthermore, MIUI is entirely customisable, and you can download new themes to give the interface a fresh look, right down to the design of the lockscreen.

The downside to this deep, granular level of customisation is that Xiaomi’s UI comes with some less welcome changes, such as the way it throttles the background activity of certain apps by default to conserve battery life. Thankfully, you can display these ‘optimisations’ in the settings.

Another bonus of MIUI is that Xiaomi issues regular updates and is constantly working with the community on bug fixes and feature requests. If you wish, you can shift over to the ‘development’ version of MIUI 9 and benefit from a steady stream of new builds. By default, however, you’re on the ‘stable’ ROM, which means you don’t have to worry too much about experimental features going wrong.

The Redmi 5 is powered by Qualcomm’s Snapdragon 450 Octa-core chipset and comes with 2GB or 3GB of RAM, depending on the model you pick. Despite the use of a mid-range chip, the performance of the phone is excellent – using a 720p screen will have contributed to this, since it means there are less pixels for the internal hardware to push around.

Activities such as browsing the web, watching HD videos and playing 3D games didn’t cause any problems, and it’s possible to have several apps open at once without any drop in speed. MIUI 9 is slick and smooth as well – but, as previously noted, you may wish to turn off some optimisations that cause background processes to be unnecessarily shut down. 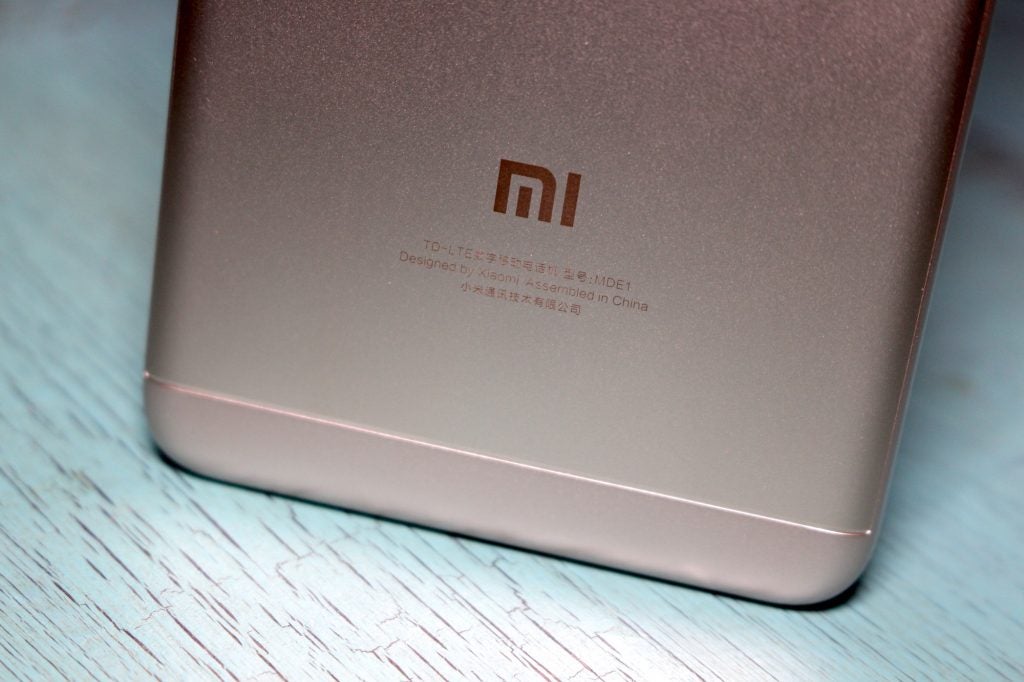 Sadly, there’s no NFC included here, so the Redmi 5 can’t be used to make contactless mobile payments using the Android Pay application. It’s a shame, since NFC is rapidly becoming a super-useful feature; it can also be used to effortlessly pair devices such as headphones, for example. But given the budget nature of the phone – and the fact that NFC hasn’t taken off in mainland China to the same degree it has in the West – its omission is understandable, if not any less disappointing.

The phone’s single speaker is situated on the bottom edge of the device. It’s relatively clear but a little on the weak side, even at maximum volume. There were a few instances where it rang in our pocket and we couldn’t hear it due to environmental noise. Only the vibration informed us that we had an incoming call. The earpiece speaker is also rather flat in terms of volume, but call quality is generally good.

Xiaomi, like so many Chinese phone makers, has flirted with the dual camera concept over the past year or so. However, just like it did with the Mi Mix 2, the firm has decided against using this setup in the Redmi 5, which only has a single 12-megapixel, f/2.2 aperture snapper. 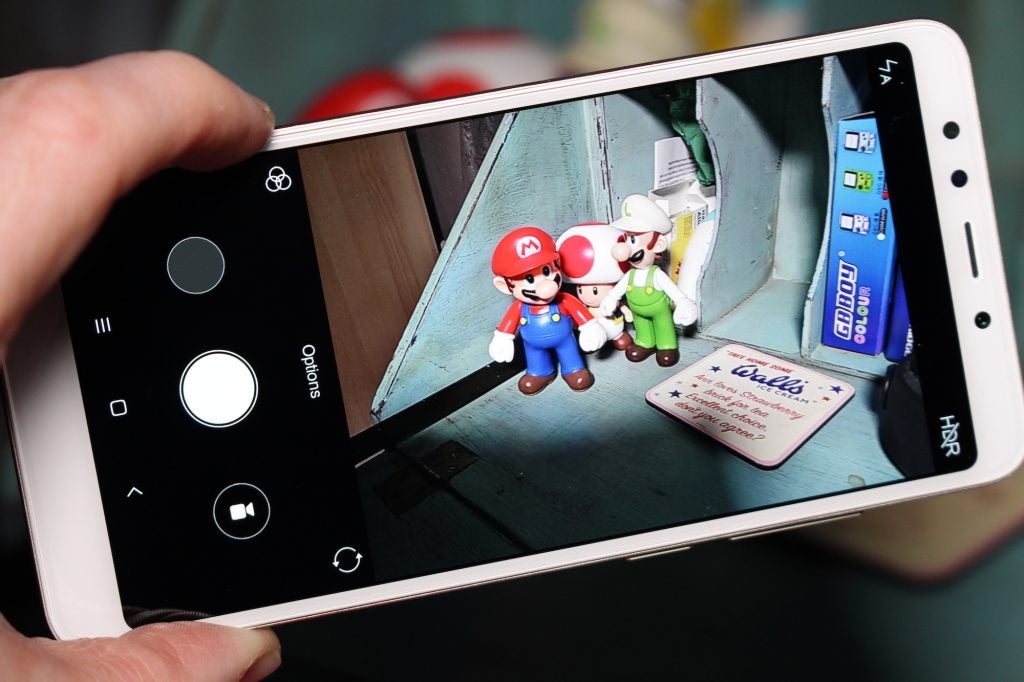 It isn’t capable of any portrait mode tricks like the OnePlus 5T and Google Pixel, but for the price this sensor is capable of capturing some striking photos, packed with colour and detail. It’s also quick to focus and snap, even when the LED flash is used. The only negative is that low-light shots are a little underwhelming, but that’s true of many smartphone snappers. 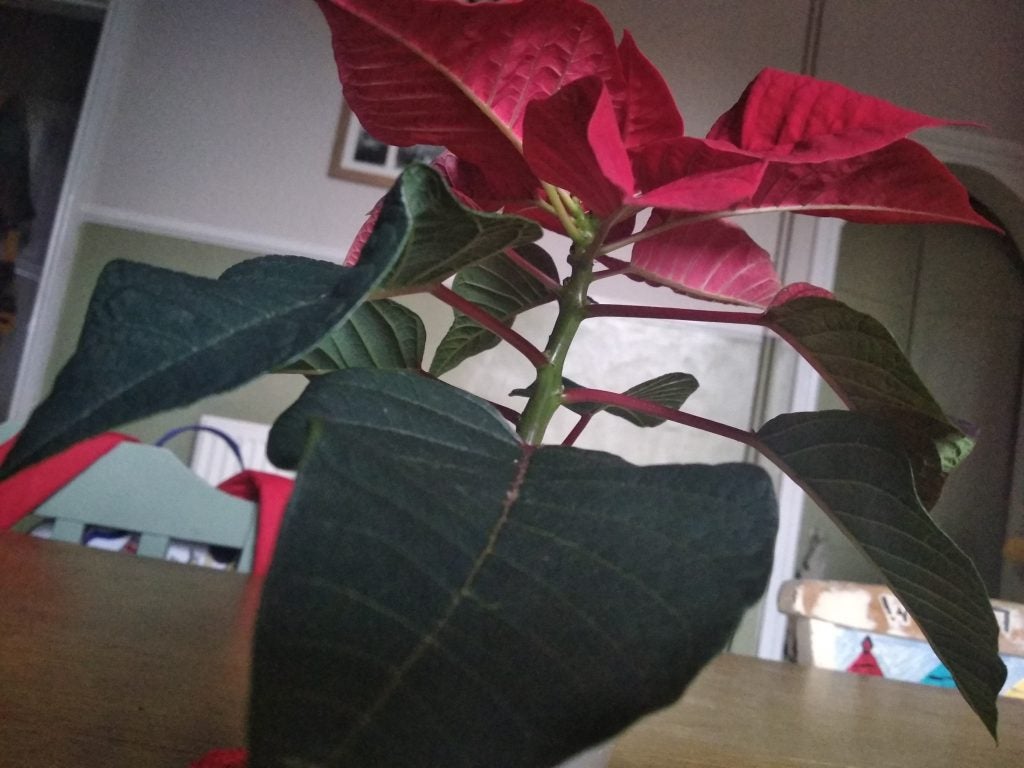 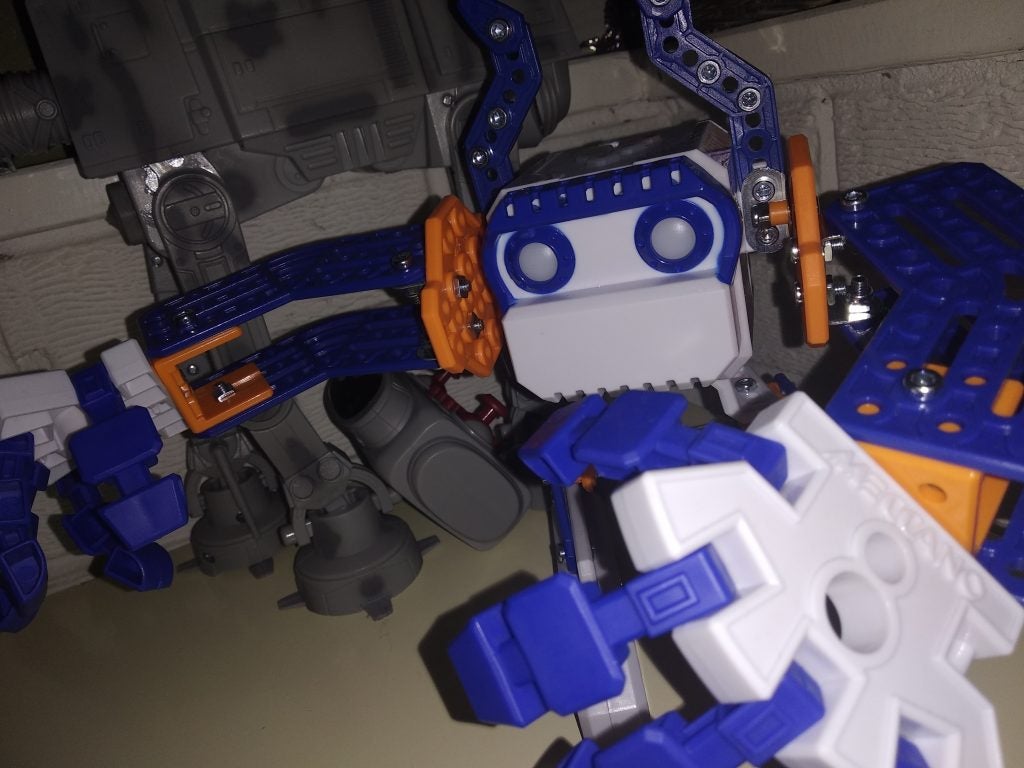 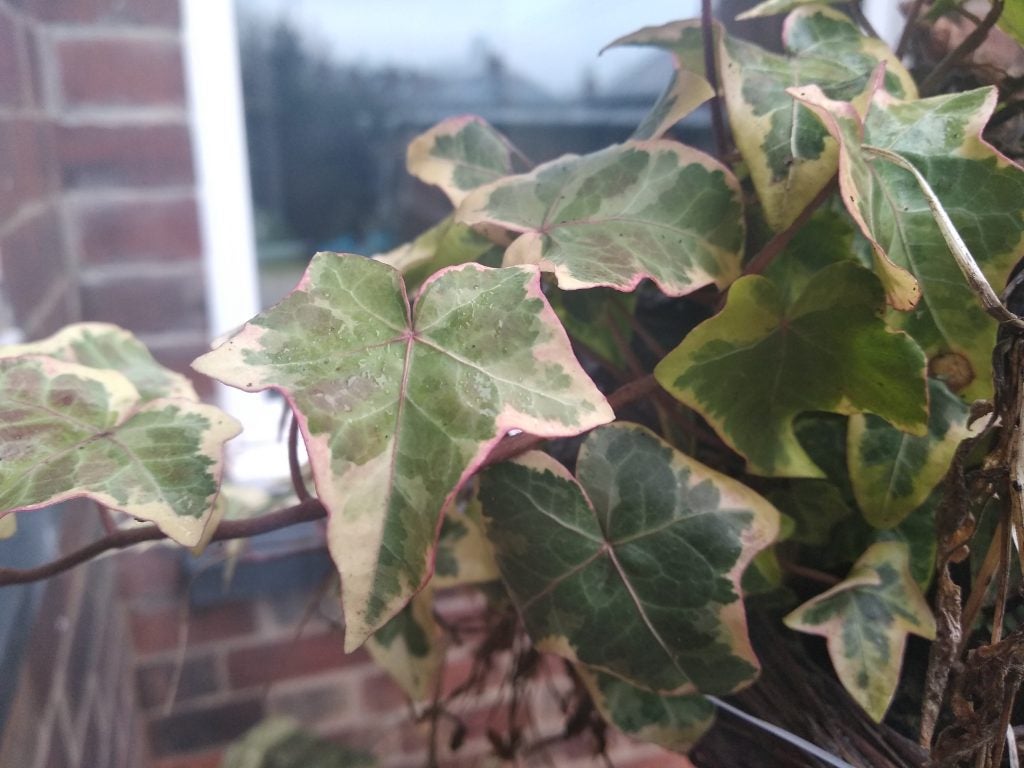 Video recording is pretty decent. The rear camera goes all the way up to 4K at 30fps, which is impressive for such a low-cost phone. The front-facing camera records 1080p at 30fps, and takes decent enough shots, if you’re into that kind of thing.

The Redmi 5’s 3300mAh battery is pretty much standard for a phone with a screen of this size, and with Xiaomi’s aggressive performance optimisations in place, it will comfortably last you well over 24 hours. But even with these switched off, stamina remains pretty good. After a day of web browsing, photo taking and game playing, we still had plenty of juice left in the tank when we got home.

Despite the fact that Qualcomm’s Snapdragon 450 allows it on a hardware level, there’s no support for the company’s Quick Charging standard baked into the Redmi 5. It would appear that Xiaomi has disabled the feature, perhaps to avoid paying Qualcomm any additional licence fees. Not that it matters, since the bundled charger will fully replenish the phone’s battery in around 2 hours. 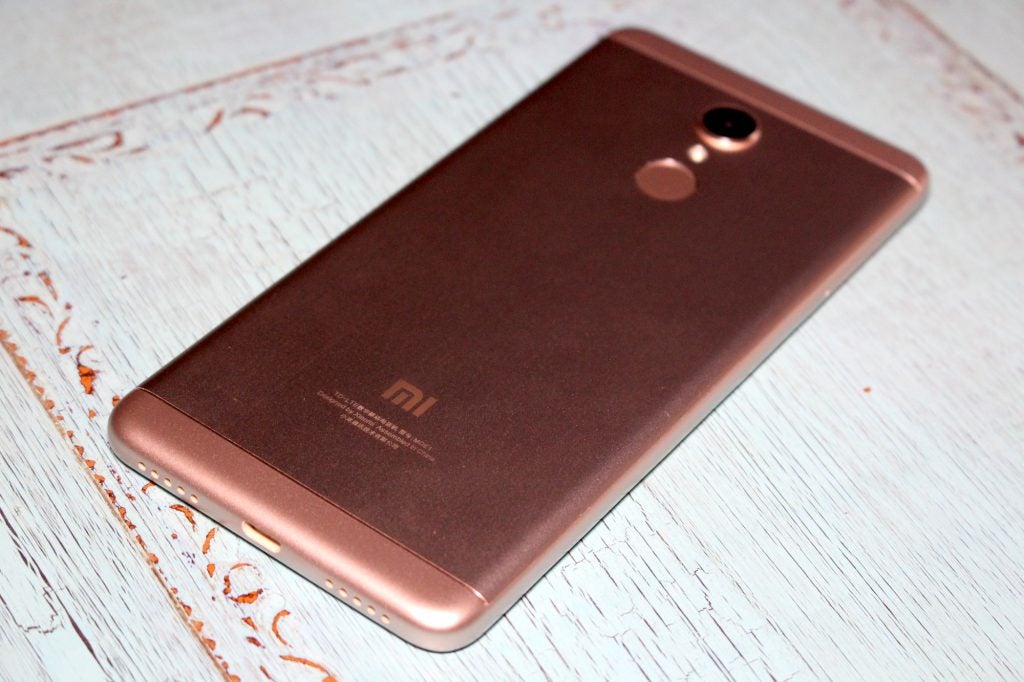 The cheaper 2GB of RAM model comes with just 16GB of storage, which won’t be enough for seasoned mobile users. Thankfully, the more common 3GB of RAM edition has 32GB of space; and if that still proves too tight then you can use one of the nano-SIM trays to insert a microSD card.

Why buy the Xiaomi Redmi 5?

The Redmi 5 is the perfect smartphone for those who want to get in on the ‘big screen’ revolution without having to break the bank. That 18:9 aspect ratio display might not be in the same league as the AMOLED panels seen on more expensive rivals, but when you take into account how much less it costs, it’s hard to grumble.

The Snapdragon 450 is also weaker than chips you’d find in Android flagships, but not to the degree that you’d perhaps imagine; there’s still more than enough power on tap here for casual mobile users.

While it lacks waterproofing, NFC, and is saddled with a 720p screen, the Redmi 5 is incredible value for money at just over £100. If you’re keen to watch the pennies but still want a smartphone with a lovely widescreen display, then this comes highly recommended.

Just be mindful of the fact that as an imported handset, you’ll need to do some additional legwork to get it to run properly in the UK.

The Redmi 5 offers an impressive 18:9 screen along with decent internal tech for a bargain price, but it’s not officially available in the UK, so be prepared for some extra effort to get it running as expected.