What is the Xiaomi Redmi 3?

The Redmi 3 is the latest in Chinese manufacturer Xiaomi’s range of super-budget handsets, which are famed for combining formidable specifications with bargain-basement prices.

It has a 5-inch HD screen, Qualcomm Snapdragon 616 chipset, 13-megapixel camera, 16GB of storage and runs Android 5.1, with Xiaomi’s custom MIUI 7 UI skin over the top.

Since the phone isn’t officially available in the UK, it can only be purchased by Far Eastern resellers such as TomTop, which supplied our review unit. Remarkably, it retails for around £105, although buyers should be aware that custom charges may apply.

Xiaomi has a reputation for creating quality phones that don’t cost the earth, and that trend continues with the Redmi 3.

While many other handsets in the same price bracket use all-plastic bodies, the Redmi 3 features a combination of plastic and metal. The top and bottom sections are plastic and allow the antenna to function properly, while the rear of the device is metal with a rather fetching diamond pattern.

The edges of the phone are rounded, which ensure that it sits comfortably in the palm, and physical buttons are kept to a minimum – the volume rocker and power button are both on the right-hand side of the Redmi 3, with the SIM tray (which accepts a nano-SIM and micro-SIM at the same time) being located on the opposite edge. 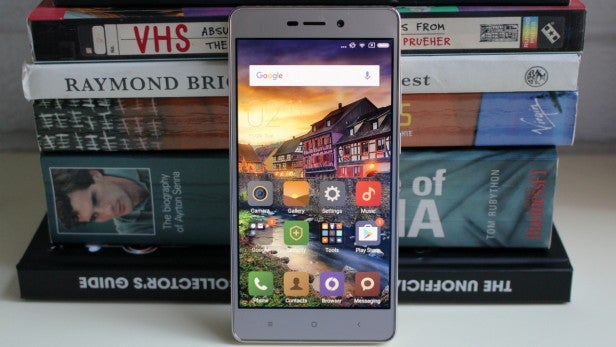 Also on the rear of the device is the camera lens and single LED flash – both of which sit flush with the bodywork – while near the bottom there’s the loudspeaker, which is accompanied by a small plastic ridge that ensures sound isn’t blocked when the phone is laying face-up on a flat surface.

On the top edge you’ll find the 3.5mm headphone socket and IR blaster (used for controlling TV sets and stereos, for example), and on the bottom there’s the micro-USB port (no USB Type-C here, sadly) and in-call microphone. There’s no fingerprint scanner on the phone – which is a shame, but hardly surprising given the low price.

The front of the phone is dominated by the 5-inch, 720 x 1,280 pixel IPS LCD screen, which boasts a pixel density of around 294ppi. It isn’t the sharpest display around and text has a somewhat jagged edge where individual pixels are visible. It’s fine for a phone in this price range, however. 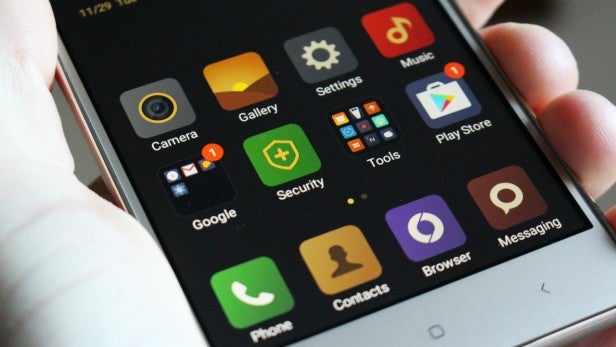 The other good news is that the panel is bright, offers good colour replication, decent contrast and solid viewing angles.

Above the screen there’s the front-facing 5-megapixel snapper, and below are three capacitive buttons: Menu, Home and Back. Sadly, these don’t light up, so they’re quite tricky to pinpoint when you’re using the phone in the dark.

Like so many Android handset makers, Xiaomi stamps its mark on its products by layering a custom user interface over Google’s core OS. MIUI is a cut above the likes of Samsung’s TouchWiz and HTC’s Sense, however; it has its own app store and a myriad of applications that supplant Google’s own options.

This is because, in China – the main market for the phone – Android devices don’t usually come with Google services installed. However, resellers will often pre-load these apps to make the phone more appealing to Western buyers, and that’s exactly what happened with our review unit.

Note that when buying devices from China you’re also likely to get a boat-load of useless apps aimed at Chinese users – mercifully, our review unit was free of such bloatware. 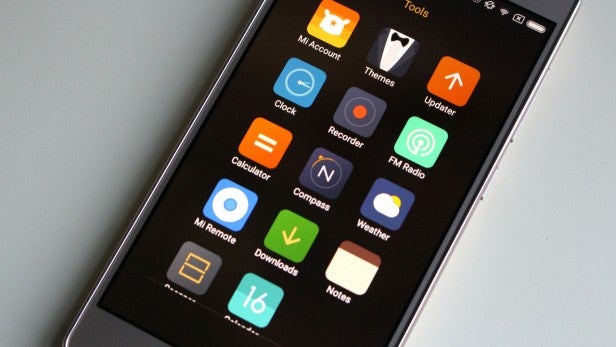 The Redmi 3 is running MIUI 7, which isn’t the latest version of Xiaomi’s UI but is very similar to MIUI 8 – currently available for a select number of devices. Based on Android 5.1, this UI boasts some notable differences to “stock” Android.

For starters, there’s no app drawer, which means all of your downloads are dumped directly onto your homescreen, as they are in iOS. There are also badge notifications on apps that show you how many unread alerts they have – another element borrowed from Apple’s OS.

There are a few features that are reasonably original, however. The one I like the most is the ability to randomise your wallpaper so you see different images as the day progresses.

It should also be noted that MIUI is incredibly slick in terms of visuals and animations, and it’s also possible to customise the theme of the UI, picking from hundreds of lockscreens, icon packs and widgets to create a totally unique look.