What is the Xiaomi Mi4?

Imitation is touchy topic in tech circles, but few manufacturers are as slavish as Chinese company Xiaomi. Branded by many as “The Chinese Apple”, Xiaomi has adopted many of its rival’s tactics with great success.

The Xiaomi Mi4 is possibly the most unashamed copycat phone you’ll ever lay eyes on. It looks almost exactly like an iPhone 5 or iPhone 5S. But despite the flagrant plagiarism on show, the Mi4 is arguably one of the best Android devices of 2014. It manages to combine incredible power with impeccable build quality and excellent software, and all for around £250.

Price as reviewed is based on import prices but does not include shipping or any additional import duties. Sample kindly supplied by Efox.

There really is no getting around it: the Mi4 looks like an iPhone. But if you’re going to emulate another product, you might as well pick the one that looks best. The Mi4’s metal chassis exudes a premium feel that is all-too-often missing from Android phones, and the entire device boasts the kind of build quality that most pre-Galaxy Alpha Samsung owners can only dream of.

The back of the phone is where Xiaomi has deviated slightly from the Apple template as it has a convex plastic panel and a centrally-aligned camera. The back of the handset can actually be removed — using a suction cup, we kid you not — and replaced with another to give your Mi4 a more unique feel.

Despite the 5-inch screen, the Mi4 feels thin and tall, just like the iPhone. This is largely thanks to the very narrow bezels either side of the display, which give an almost edge-to-edge screen, at least horizontally. At 8.9mm, the Mi4 is impressively svelte, but the aforementioned bulge on the rear panel makes it feel a little fatter than it actually is.

The sides of the phone showcase the Micro SIM slot, volume key and power button. Compared to most Android devices, the placement of these buttons is switched — the power key resides below the volume rocker. This takes some getting used to, and we found that we often hit the power button by accident when removing the handset from our pocket or when making a call. Along the top edge of the Mi4 is the 3.5mm headphone socket and the IR blaster, which can be used to control your television set, amongst other things. 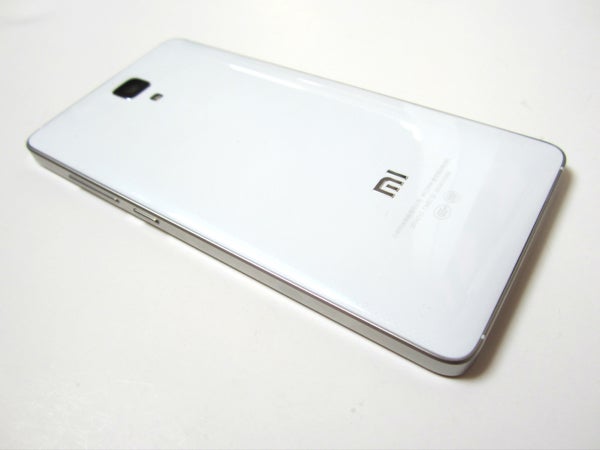 The rear cover is plastic

The bottom edge has a grille for the single speaker and a MicroUSB slot for charging and data transfer. Strangely, Xiaomi has opted for the little-seen MicroUSB-A standard, which boasts a square-shaped connector. You can still use the more common MicroUSB-B lead, but because of the shape of the port there’s the danger that you could insert the cable the wrong way around and damage the connection. Needless to say, caution should be taken when trying to top up your battery late at night when you’ve had one too many naughty beverages.

Below the screen you’ll find three touch-sensitive buttons, but with a difference. Unlike most modern Android devices — which have Home, Back and Recent Apps commends — the Mi4 reverts back to the pre-Android 4.0 arrangement of Home, Back and Menu. That means to access the Recent Apps menu — which shows all of your active applications — you’ll have to long-press the Home button. It’s hardly an elegant solution, but one that you can easily become accustomed to.

The Mi4 comes in two storage flavours — 16GB and 64GB. We’re reviewing the former, and when you take into account all of the software that comes pre-loaded which you can’t uninstall, the end user has about 11GB to play with. Sadly, like its forerunner the Mi3, the Mi4 lacks a microSD card slot so you can’t augment that total with cheap flash media. However, the Mi4 does go one better than the Mi3 by finally moving to the now-ubiquitous Micro SIM standard. 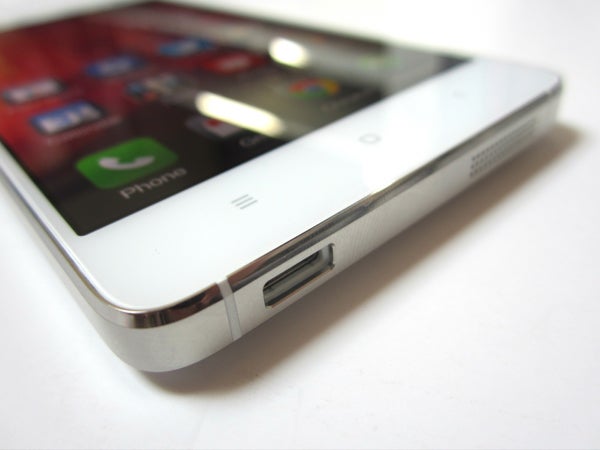 Xiaomi has taken the decision to launch the Mi4 in two basic configurations. The first — which is the one we’re reviewing — only supports 3G. A revised model with support for 4G networks is expected any day now, but that hasn’t stopped the 3G-only model selling like hot cakes in its native China.

A top of the line smartphone that lacks 4G is rather strange in 2014, and if you’re thinking of ordering a Mi4 from abroad you’ll almost certainly want to take this into account – especially if you’re already signed up to an expensive 4G contract in the UK. For the record, the 3G model works flawlessly on UK networks – we didn’t experience any issues with signal strength or reception quality.

Elsewhere the Mi4 has dual-band 802.11 a/b/g/n/ac Wi-Fi, an IR blaster, GPS and DLNA support, but it lacks an NFC chip — something which was present in the Mi3. According to Xiaomi CEO Lei Jun, only one percent of existing Mi3 users actually make use of the contactless tech, and the feature was removed from the Mi4 to keep costs low.

While NFC is still clearly in its infancy, it could well take off in 2015 — especially now that Apple has put it into the iPhone 6. Not having NFC could be a real drawback for Mi4 owners moving forwards.