The Xiaomi Mi3 has a display that can – for the most part – compete with its much better-known rivals. It’s a 5-inch LCD screen of 1080p resolution.

You don’t get the ridiculously high QHD resolution seen in the LG G3, but then we’re not entirely convinced it’s necessary in a 5-inch display. In most respects, the Xiaomi Mi3 screen is great. Colour, top brightness and outdoors visibility are all up there with the best. It’s bright and vivid, but colours aren’t oversaturated to the extent that people’s faces in videos or pictures look unrealistic.

The Samsung Galaxy S5 is better outdoors and offers better black levels, but among IPS LCD phones the Mi3 is a top contender. 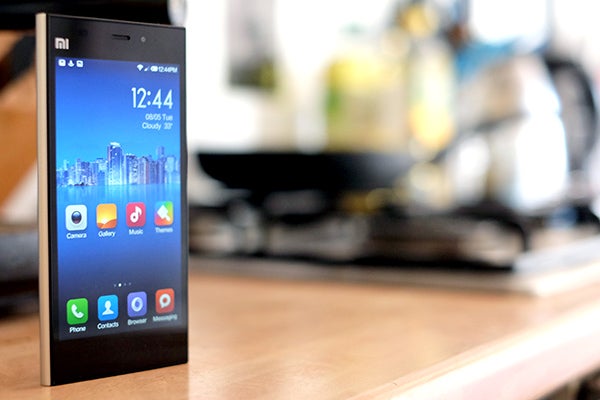 The one issue we have is something often seen in screens where QA isn’t water-tight – panel uniformity. Down at the bottom of the display there’s a greyer/darker area that’s not as well-served by the Xiaomi Mi3’s backlight LEDs, and there’s a short brighter strip up at the top where those LEDs sit. However, the effect is fairly minor, and only something nit-pickers will notice. It’s just not perfect.

Other occasionally problematic elements are all fine – the automatic brightness setting is reliable and smooth, where it can be erratic in very budget-conscious phones. The Xiaomi Mi3’s is a screen that doesn’t seem to have been made on the cheap. And that’s one of the most important things for any phone trying to break into the big time.

The front of the Xiaomi Mi3 is covered with Gorilla Glass 3, the very same kind of toughened glass used by the Galaxy S5 and most other mid-range and high-end Androids. It’s very scratch-resistant, and doesn’t flex under any kind of normal pressure from your finger. This is again an element Chinese ‘knock-off’ phones tend to sacrifice.

The most controversial element of the Xiaomi Mi3 is its software. It runs Android 4.3, which itself is out-of-date, and uses a heavily customised interface that replaces all of the Google apps suite with Chinese alternatives. As takeovers go, it’s pretty hostile.

Google Play is replaced by Mi Market, Hangouts with Mi Talk, Weibo becomes your default search engine and the email client has a completely different look to the standard Google Mail one. Even if your language is selected as English, the keyboard will routinely suggest Chinese words with its autocorrect function too.

There’s no mistaking the Xiaomi Mi3 for anything but a Chinese phone fresh out of the box. And as such it’s pretty difficult to use. 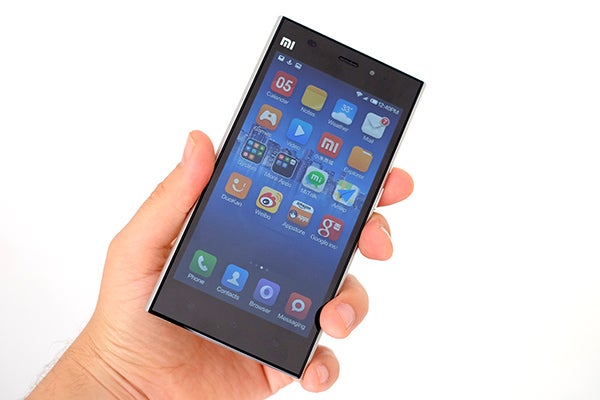 There are workarounds to get Google Play and the rest of the Google apps suite installed, but it does require a bit of research, and we needed to try it a few times to get everything working. This is certainly not an Android phone for western beginners.

The Xiaomi Mi3 also makes significant changes to the workings of Android, much like (the also Chinese) Huawei’s phones do. We’re not big fans of Huawei’s custom Android interface, and the same is largely true here.

Xiaomi has scrapped the discrete apps menu in favour of lumping everything onto your home screens. Some call Xiaomi the Apple of China, and this sort of move does nothing to dissuade such comparisons. Of course, this sort of single-plane approach to the OS works much better with iOS 7 than it does with Android, and we found the Xiaomi Mi3 a little awkward to operate compared with more ordinary Androids.

However, it does not seem to be a particularly burdensome interface. Where the Huawei Ascend P7 is weighed down by its slightly wonky China-style interface, causing basic performance issues, the Xiaomi Mi3 is actually pretty quick.

It just needs a lot of tweaking. Replacing the core apps, the keyboard and filtering away all the Chinese-only stuff into a Room 101 folder takes a bit of effort.

There are some little extras you get with the Xiaomi Mi3’s custom interface not seen everywhere, though. You can, for example, choose what colour the notification LED is and change what the battery icon looks like – little customisations similar to those seen in the OnePlus One. 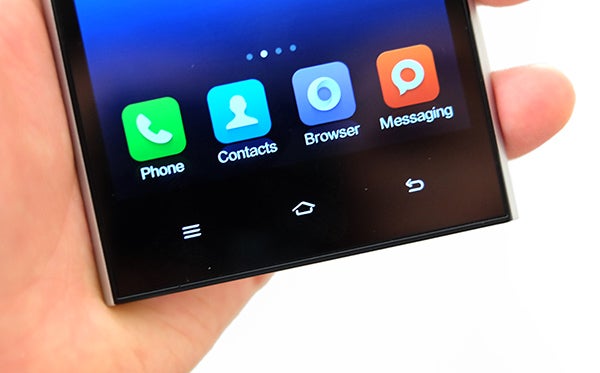 The phone’s hardware is a lot less contentious than its software. The Xiaomi Mi3 uses the Snapdragon 800 processor and 2GB of RAM. It’s a quad-core 2.3GHz chip. Each of these specs is slightly off the very top rung in phones, but the difference is largely inconsequential in terms of what it’ll mean in real life for most people.

Some phones have 3GB of RAM and the newer Snapdragon 801 chipset, but there are no truly tangible benefits we’ve noticed when software optimisation plays so important a part in a phone’s performance.

That said, the Xiaomi Mi3 performed superbly in our usual benchmarks – ridiculously well if anything. In Geekbench 3, the top score we recorded was 3030. That’s higher than any Snapdragon 800 phone we’ve tested, besting several Snapdragon 801 ones too. It’s probably down to benchmark cheating. But it does give you an idea of how powerful the phone is.

There are definite benefits to having a processor with as popular a GPU as the Xiaomi Mi3’s Adreno 330, though. Top-end games benefit from extra graphical effect you don’t get from a lesser GPU, or even a lesser-used one. It’ll generally mean more reflections, more lighting effects in the top-tier 3D titles. In Dead Trigger 2, for example, just about everything is shiny – even dirty old bits of corrugated metal.

Gaming is excellent on the Xiaomi Mi3 too. The large, sharp, vibrant screen is perfect for games, and performance is great. The only real limitation is internal storage – real gaming fiends should look into the more expensive 64GB model as the 10GB or so you get free with the 16GB entry-level model will soon be eaten up.