The Xiaomi Mi Band 4 is a fitness tracker that everyone can afford at £35, and it’s one of the best to boot. It easily matches the quality of the £90 Fitbit Inspire HR, even outdoing it with better battery life. It works with Android smartphones and iPhones.

The Band 4 packs in a heart rate sensor, GPS when connected to your phone, and plenty of watch faces. If you’re happy to use Xiaomi’s Mi Fit app to view your fitness data, then it is hands-down worth the insanely low asking price.

There have been three versions of the Mi Band prior to the Mi Band 4, and all have improved upon the winning formula of a slim, surprisingly well-featured fitness tracker at a killer price to arrive at this latest version. The Mi Band 4 is the best of the bunch, and certainly worth every penny in terms of what’s on offer.

What you don’t get is a particularly exciting design. The Mi Band 4 is as plain as they come, with a black silicone band into which the small pebble-shaped tracker sits. This allows you to buy additional straps and charge the tracker in its proprietary charging cradle.

That tiny tracker packs in a 0.95in capacitive colour touchscreen, a heart rate sensor, home button, 5-ATM water-resistance, 512MB of RAM, an accelerometer and a gyroscope. Once you’ve charged up the device and snapped it into the strap, it’s a tracker you can put on and will likely forget you’re wearing since it weighs just 22.1g. 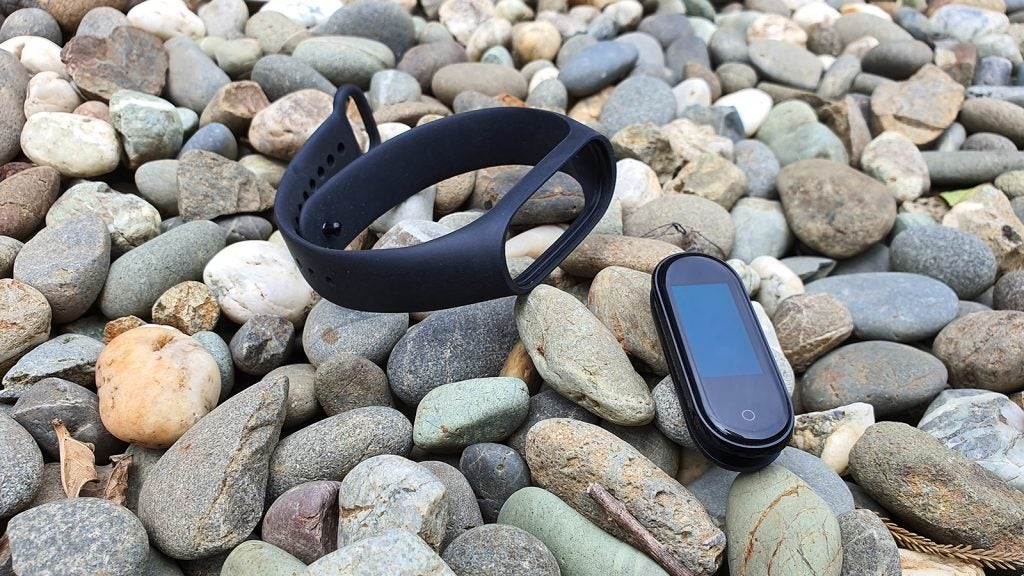 The tracker unit pops out of the silicone strap

The one thing to note about the Mi Band 4’s display is that it can be difficult to read in direct sunlight. And that’s it – there isn’t much else to say about the Mi Band 4’s design. That’s to its credit, however. You simply put it on, forget you’re wearing it, and it will go about its business of tracking everything.

The Mi Band 4 has you covered with step tracking, calories burned, distance travelled, heart rate and sleep tracking. That’s a fair amount, and it will collect all of this data without you even interacting with the device.

In addition, it has workout modes that you must manually trigger; there’s no auto-workout detection of the type you find on more expensive fitness trackers. But having the ability to start workouts on the Mi Band 4 itself is an upgrade on previous generations of the device, where you’d set them off from the Mi Fit app.

For an outdoor run, stick your phone in your pocket and start the run from the Mi Band. It will connect to your phone’s GPS to track your route, which you can view in the app after your run is complete alongside stats on your pace, average heart rate, stride and cadence and split times. 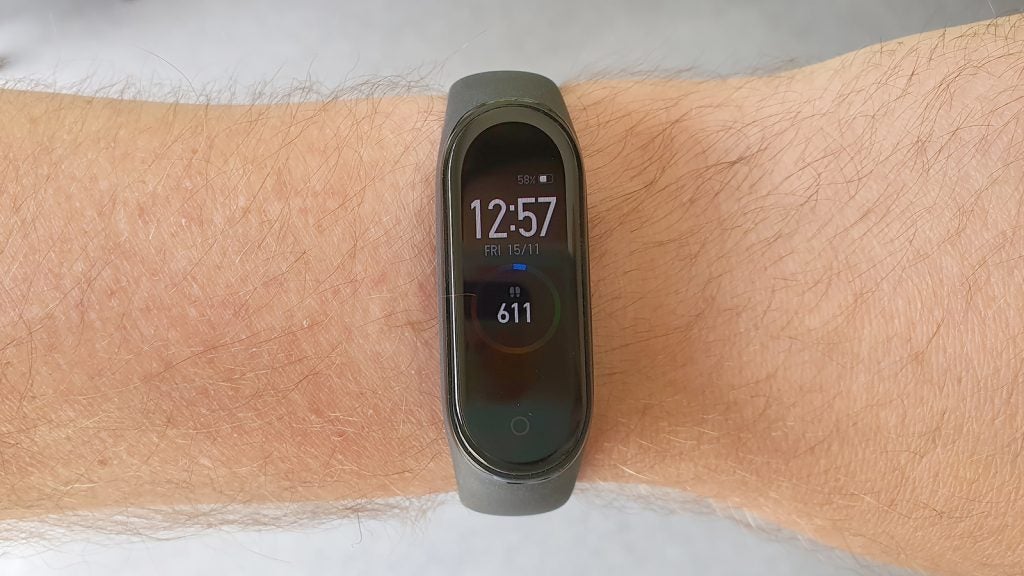 Also included are reminders to move, if you’ve been at your desk too long, plus alerts when your heart rate is higher than normal (I didn’t get this warning during my testing, even after workouts).

There are modes for treadmill, cycling, walking, weights and, thanks to the Mi Band 4’s 5-ATM water-resistance, swimming too. Putting the Mi Band 4 through its paces, I was incredibly impressed with what it could achieve for the price.

Testing the device against the Samsung Galaxy Watch Active 2 and the Polar Vantage V watch to compare stats, I found the Mi Band 4’s figures pretty accurate. I’d advise that you always connect to your phone’s GPS for runs, since this results in far more accurate distance and cadence readings. Without GPS data the Mi Band simply has to guess, resulting in less accurate readings – although this is also true for rivals products without built-in GPS, and actually includes every Fitbit except the Fitbit Ionic.

The bottom line here is that I trust the £35 Mi Band 4 to accurately record my workouts to the same degree as a device such as the £199 Fitbit Versa 2, backing up Xiaomi’s irresistible pricing.

A downside to the Mi Band 4 is the Mi Fit app, which is less than intuitive at the best of times. Like Google Fit, Samsung Health or the Fitbit app, it collects data from the Mi Band and displays it in different sections.

Think of it as a very basic overview of your metrics. You can drill down to see historic workouts and walks, but it isn’t obvious how to find them – and neither is it clear what is interactive and what isn’t. It’s a bit of trial and error to actually find all the stats you’re after.

When you do eventually find the stats you’re after, readouts can be useful and detail several metrics of a workout.

When the whole point of a fitness tracker is to be able to view your health data, the Mi Fit app can be a tad frustrating. If you’re a relatively casual observer of your steps and workouts, however, you shouldn’t have a problem.

Mi Fit is meant to be able to link to Google Fit to share and display data, but in testing I couldn’t get this to work properly.

Thankfully, selecting different watch faces is easy and there are plenty from which to choose. However, they’re all much of a muchness on a screen that’s less than an inch wide. 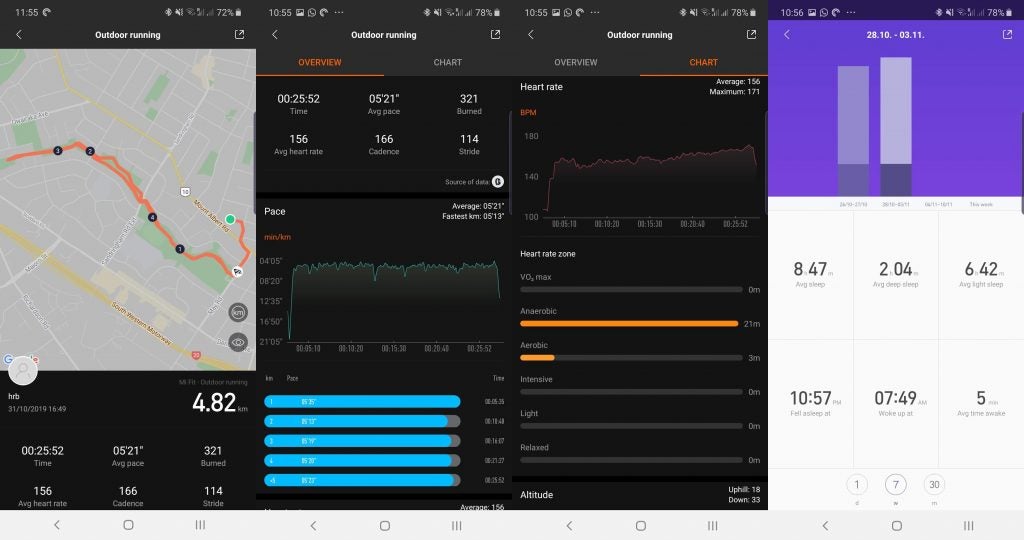 The Mi Fit app is unintuitive, but offers plenty of information

One thing the Mi Band 4 can’t do is interactive notifications – not that you’d want to try to type a reply to a message on the tiny display. The device can notify you of incoming calls and texts, and selected app notifications (you can pick them in the Mi Fit app), which is handy if you don’t want every ping from your phone delivered to your wrist. The vibration motor in the Mi Band 4 is surprisingly good for its size, but is a pretty basic buzz.

There’s also a raise to wake the display option hidden in the Mi Fit app settings, and you can set a “do not disturb” mode on the band if wearing the device to bed. Add to that on-watch alarms, a stopwatch and music controls for what’s playing on your phone, and you can really appreciate just how much tracker you’re getting here.

Xiaomi quotes a battery life of 20 days; I found that to be accurate and then some. I charged the Mi Band 4 to 100% on my first day of testing, and after a week of constant use it was at 75%. The battery will run down noticeably faster when you’re using the connected GPS modes for workouts.

Even then, I’d confidently say you’ll get at least 10 days of charge if doing workouts every day – and it will likely go for longer on most occasions. It doesn’t seem like the Mi Band 4’s 24/7 heart rate monitoring kills the battery either, which is great.

A slight annoyance – but not one exclusive to the Mi Band 4 – is the proprietary USB charging cradle. Even £500 fitness watches usually come with a product-specific charger, but it’s frustrating at any price point if you lose it. 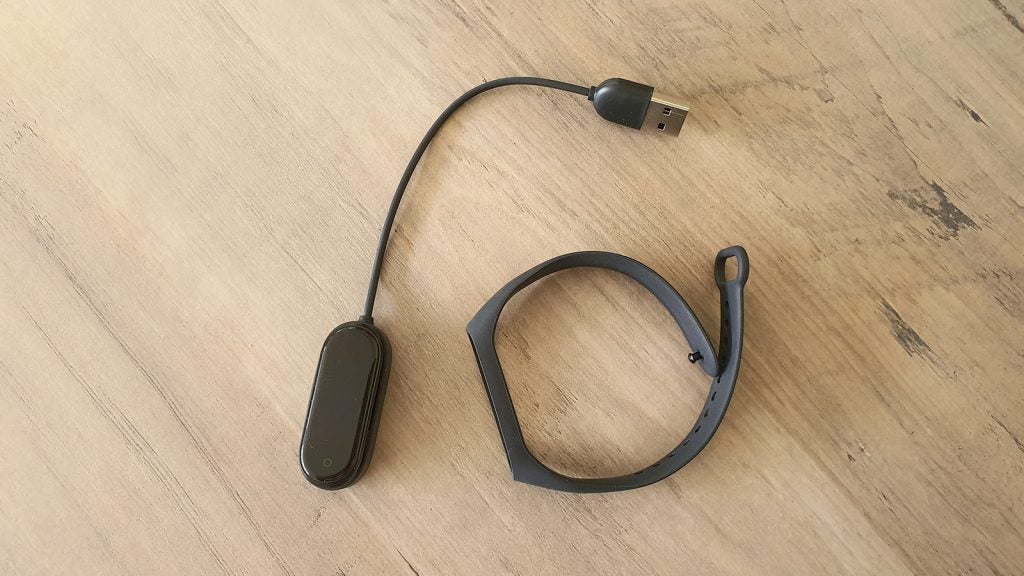 The proprietary charger included in the box

Should I buy the Xiaomi Mi Band 4?

If you want to see if a fitness tracker will benefit you in any way, but don’t want to break the bank, the Xiaomi Mi Band 4 is a no-brainer. For £35 you get many of the same features found on trackers costing three or four times the price – and in a product that doesn’t itself feel overly cheap.

The Mi Band 4 is a good option if you don’t want to fork out for a more expensive Fitbit, and I’d even recommend it to casual runners for tracking runs, so long as you’re happy to take your phone with you to use connected GPS.

The one downside is the slightly frustrating Mi Fit app, plus the fact that syncing to the Google Fit app didn’t work in my testing.