What is the Xiaomi Mi Band 2?

The Mi Band 2 is the latest wearable fitness tracker from Chinese hardware giant Xiaomi. It follows the cheap but feature-rich Mi Band and Mi Band 1S and introduces a screen for the first time in the range, as well as improved pedometer tech, which Xiaomi claims is kinder to the battery.

The Mi Band 2 is powered by a 70mAh cell that offers approximately 20 days of use on a single charge, and can monitor your steps, heart rate and sleep patterns, as well as display rudimentary notifications for calls, text messages and selected applications. Oh, and it only costs around £35.

Despite its low price point, the Mi Band 2 feels solid enough and looks a lot more impressive than the rather dull earlier models. As with previous Mi Bands, the Mi Band 2 comes in two distinct parts – the module itself and the wrist strap it slots into. Assembling these two elements is the first thing you’ll have to do when opening the packaging, and you’ll need to repeat the trick every time you want to charge it, as the proprietary USB cable can’t be connected when the main module is fixed to the strap. 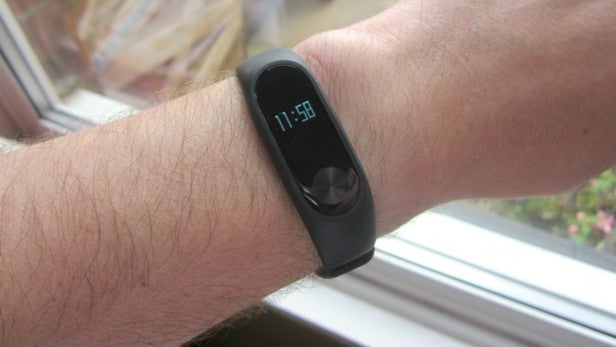 The IP67-certified waterproof unit itself has a scratch-proof face and single capacitive button for interaction. There’s a monochrome 0.42-inch OLED screen which displays data such as the time, total steps, calories burned, distance travelled and remaining battery life. On the underside of the unit – the bit that touches your skin – there’s an optical heart-rate sensor. The bottom edge is home to two charging pins that link to the aforementioned charging cable. This is quite a short lead and, if you lose it, you won’t be able to charge the Mi Band 2 – so keep it safe.

The silicone strap is apparently made from a breathable, anti-sweat material that is more comfortable than the one seen on the original Mi Band. It feels like rubber but is tougher and should hopefully stand up to more punishment. Even if it does become damaged over time, you can buy a replacement in black, orange, green and blue. A simple popper mechanism is used to fix the watch around your wrist.

The introduction of a screen might lead you to assume that Xiaomi is dipping its toe into smartwatch territory with the Mi Band 2, but the focus here is still very much on fitness. Out of the box the first thing shown on the screen, after the time of day, is your total steps taken. Putting this data within instant reach is very much the Mi Band 2’s raison d’etre. You can configure what information is shown as you tap through the menu using your finger, and it’s possible to also display calories burned, distance travelled and your last recorded heart rate. 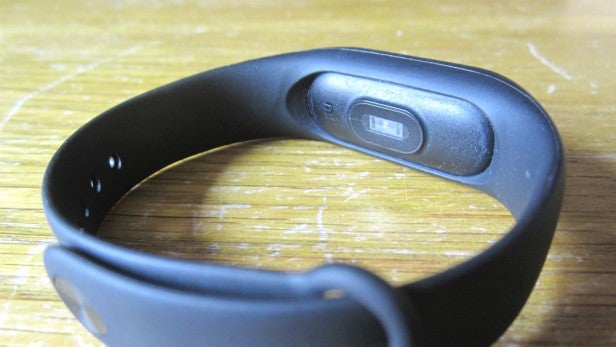 Inside the main unit there’s a vibrating motor which allows it to notify you of events. Passing a particular goal triggers a notification, as does sitting idle for too long – the Mi Band 2 kindly reminds you to get up from your seat and walk around for a bit. You can also set an alarm which will vibrate to wake you from your slumber – very handy if you’re keen not to disturb other people in the house with a traditional audio alarm. Because it’s not as bulky as your typical smartwatch, wearing the Mi Band 2 in bed isn’t an issue, and you can even tell the device to monitor your sleeping patterns to ensure you’re getting a good night’s kip. 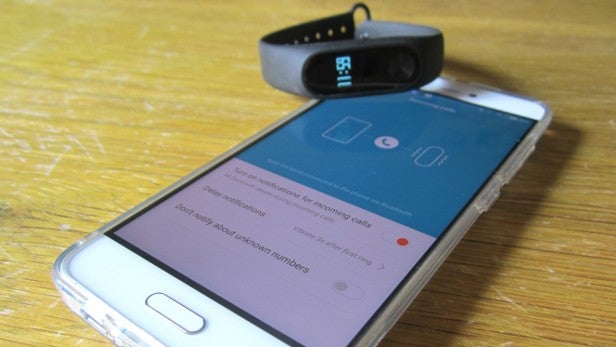 Finally, it’s possible to use the Mi Band 2 to bypass your phone’s lock screen security. You can tell the phone to disable the lock when it senses that the device is nearby, which is quite a time-saver, but might not be of much use if you utilise fingerprint security, which only requires a touch anyway.

To make use of the Mi Band 2 you’ll need to install Xiaomi’s Mi Fit companion app on your phone. Despite the fact that the Mi Band 2 – like all of Xiaomi’s products – isn’t officially sold in Europe and the UK, Mi Fit is freely available on the Google Play and iOS app stores. It’s a pretty slick download which allows you to control which notifications are sent to the Mi Band 2, what information it displays when you tap through the main menu using the single button, and which third-party apps are allowed to send alerts to the device. There are plenty of other options to fiddle around with, too. 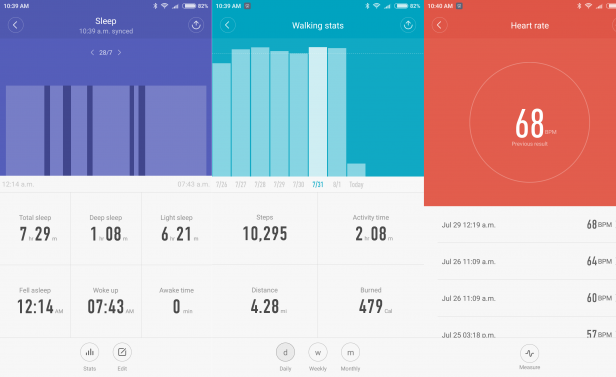 Mi Fit tracks and collates all of the data captured by the Mi Band 2 and presents it in a manner which makes it easy to see how you can improve your general fitness regime. The app isn’t as great for giving health and fitness guidance, aspects you get from the likes of Jawbone’s Smart Coach feature. You’ll need the app if you want the Mi Band 2 to track your heart rate, as there’s no way of doing this with the device on its own. Mi Fit can keep a record of your weight, but you’ll obviously have to measure this yourself with scales and input the information manually. 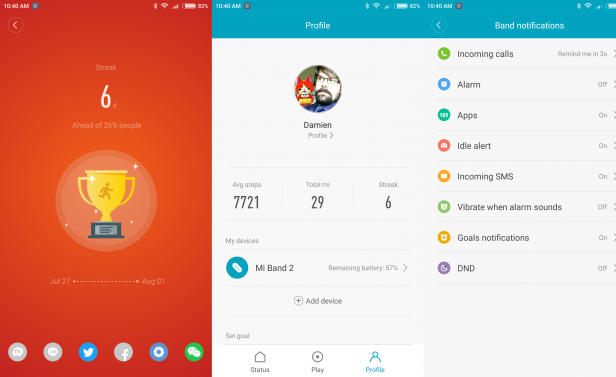 While Mi Fit stores your fitness information under a Xiaomi user account – which, unless you’re already a fan of the brand, you’ll need to create – you can share this information with your Google Fit profile to avoid duplication. Most Android users will have Google Fit installed already and will use it to get some perspective on their overall health, so being able to integrate your Mi Band 2 data is a real boon. 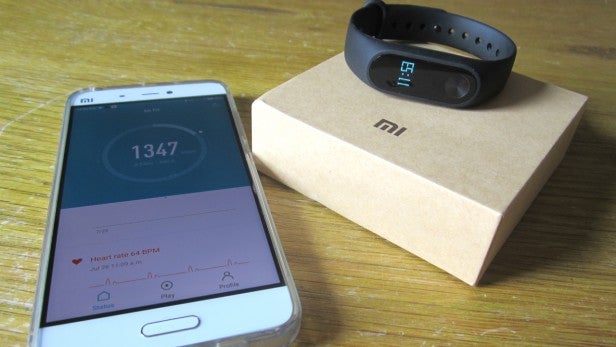 You can set yourself personal goals, such as number of steps taken in a single day, and as is the case with other wearable devices, it’s possible to compare your performance with that of your friends. This is one area where the Mi Band 2’s Chinese origins let it down somewhat: the only social networks it currently supports are WeChat and Sina Weibo, both massive in China, but relatively unknown in the West.

There’s no means of connecting and sharing data with Facebook and Twitter, two networks which – for Western users, at least – would be infinitely more useful when it comes to finding friends who also own a Mi Band 2. This could change over time, as Xiaomi has made no secret of the fact that it wishes to expand its global business. 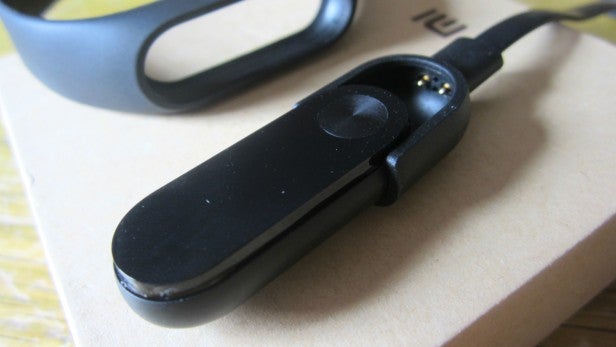 The Mi Band 2’s 70mAh battery can last for up to 20 days on a single charge, according to Xiaomi, and during my review period I managed to get very close to that. Naturally, the more notifications you have enabled, the quicker the battery will drain. Having to remove the actual sensor from its band to charge is a little inconvenient but no worse than competing fitness trackers, such as the Fitbit Flex.

Should I buy the Xiaomi Mi Band 2?

At just £35, the Mi Band 2 represents incredible value when set against some of the established fitness wearables, offering more functionality than many of its rivals at a fraction of the price. The companion smartphone app is also excellent, although more third-party app support would be welcome. Being able to share Mi Band 2 data with Google Fit means that seasoned Android users won’t have the issue of doubling up on information or need to use multiple accounts for tracking their general health.

While the Mi Band 2 provides plenty of data, the app could be stronger in presenting this information in actionable ways beyond just seeing historical patterns. Still, considering the price; excellent battery life, useful notifications and an eye-catching design – complete with replaceable straps – make the package even more appealing.

Great to look at and packed with features, the Mi Band 2 is one of the best-value fitness trackers money can buy.

Thanks to GearBest for supplying the Xiaomi Mi Band 2 used in this review.