What is the Xiaomi Mi A1?

Xiaomi’s reputation for good phones at budget prices makes it the ideal saviour for Google’s beleaguered Android One programme – and the Chinese company has come to the rescue with the Mi A1.

Android One was supposed to offer cheap handsets running stock Android to millions of customers in developing countries. However, Google’s initial steps were hampered – somewhat ironically – by the likes of Xiaomi making big gains in regions such as India at around the same time with its series of low-cost and powerful devices.

The Mi A1 – in reality, a Mi 5X minus Xiaomi’s custom MIUI skin – is a renewed effort to bring “pure” Android to the wider world. It showcases a Snapdragon 625 chipset, 4GB of RAM, 64GB of storage and a dual 12 megapixel camera setup – all for around £200.

Design-wise, the A1 shares plenty of features with other Xiaomi handsets, which makes for a handset that looks a lot like an iPhone. But this could be said about a great many smartphones these days.

The front of the device is home to a 5.5-inch, FHD LCD screen, which a  sizeable bezel at the top and bottom. The top bezel is home to the front-facing camera and earpiece, while the bottom bezel features three illuminated capacitive buttons for the Android commands Menu, Home and Back.

The A1’s bodywork is metal, with only the antenna lines at the top and the bottom of the device breaking up the design. The rear of the phone features a super-fast and very reliable fingerprint scanner, as well as a dual 12 megapixel camera setup with an LED flash that’s located quite close to the edge of the phone. 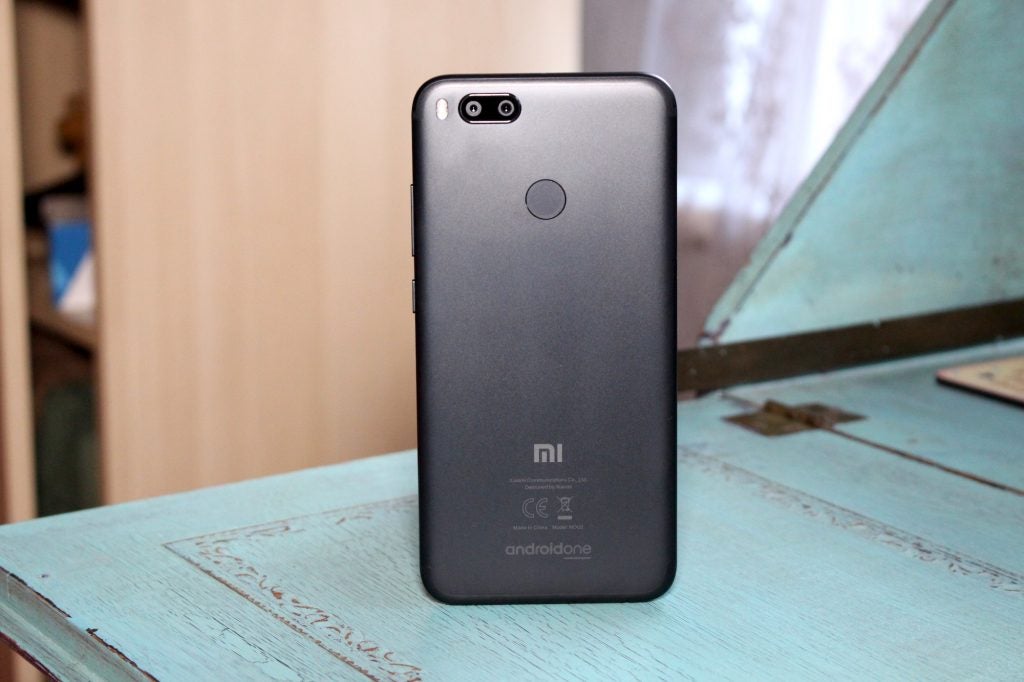 The left-hand edge is home to a nano-SIM tray (which can accept two SIMs or one SIM and a microSD card) while on the opposite side you can find the power and volume buttons. On the bottom there’s a USB Type-C port, a single speaker and – gasp – a 3.5mm headphone socket. Along the top edge is a noise-cancelling speaker and an IR blaster. Unfortunately, this device doesn’t offer water-resistance.

While there’s nothing particularly noteworthy about the way the A1 looks, it’s a solidly-constructed device that doesn’t feel cumbersome in the hand.

The Mi A1’s 1080p screen is reasonably bright, but it looks slightly washed out when compared to some of the better AMOLED and LCD panels on the market. Contrast is also quite poor, with blacks looking slightly weedy, plus legibility in direct sunlight isn’t brilliant. 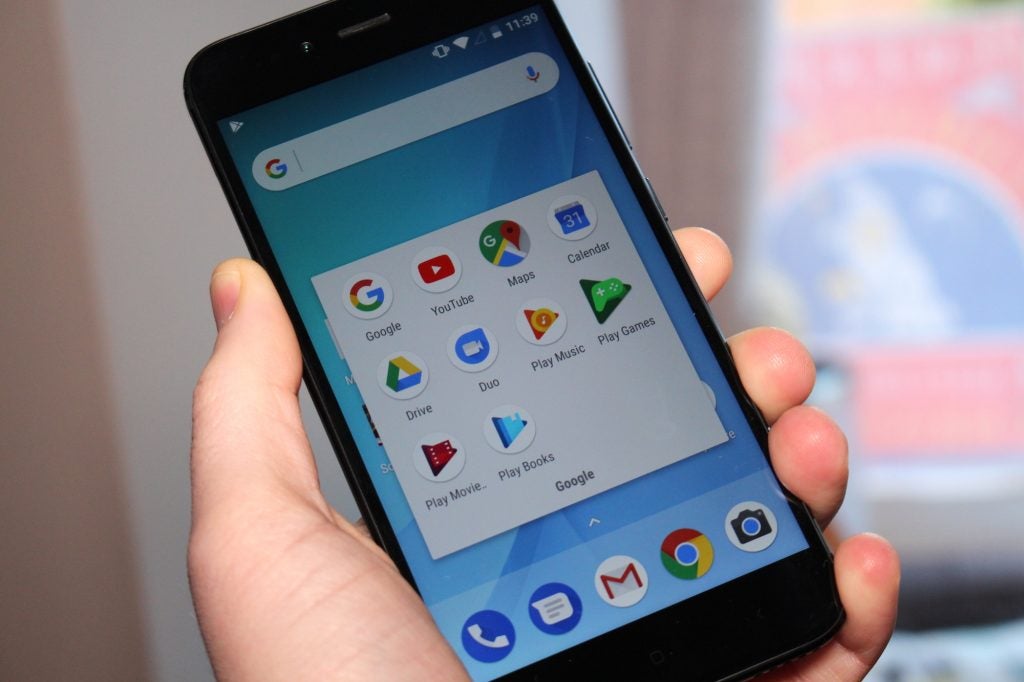 Despite this, the resolution is more than adequate for a screen of this size and viewing angles are absolutely rock-solid.

Xiaomi’s MIUI skin continues to divide opinion. Some see it as a refinement of Android, which offers a slickness only rivalled by iOS; others view it as derivative, bloated with pointless apps, and too focused on driving you towards Xiaomi’s own digital storefront.

If you’re in the latter camp then you’ll be pleased to know that MIUI isn’t an issue on the A1. As part of the Android One line, it runs a stock version of Google’s OS and – ultimately – Google itself is in charge of updating it. 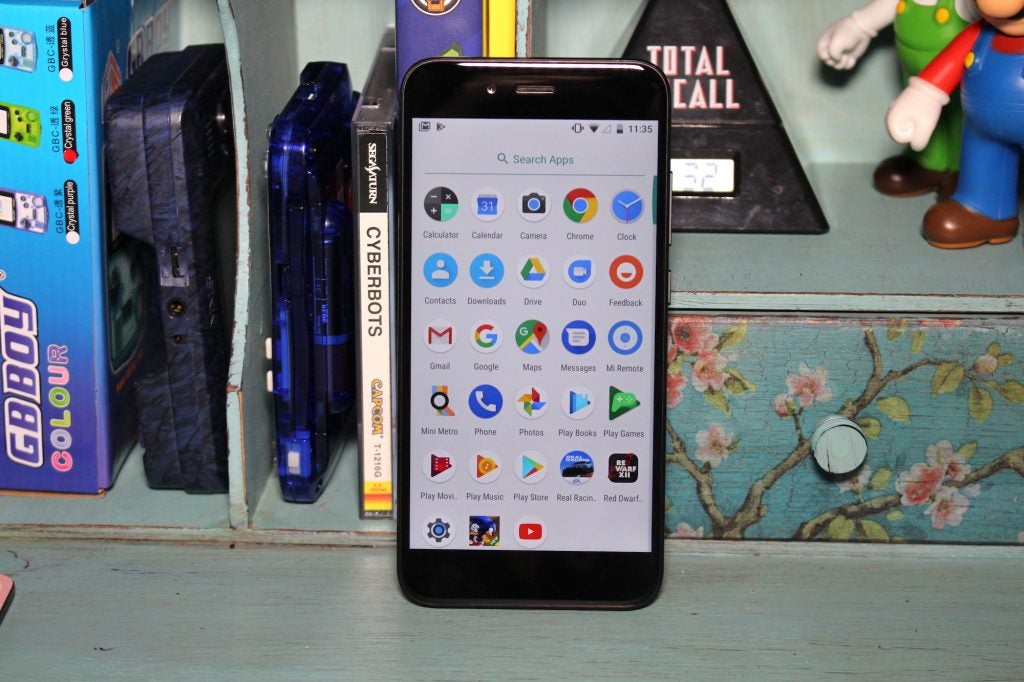 Stock Android isn’t that big a deal when it comes to low-cost Chinese phones; the Maze Alpha and Elephone S8 both run software that’s close to stock. The key difference here is that while those devices are free from bloat, they’re not updated by Google directly and, more often than not, receive only a handful of OTA updates before being abandoned.

The unit we reviewed isn’t on Oreo yet, but an update is promised soon. It’s running Android 7.1.2 instead, and is refreshingly free from bloatware and pointless apps.

You get the usual selection of Google applications – Gmail, YouTube, Google Maps, Duo, Play Music and so on – but that’s about it. The only Xiaomi apps installed are Mi Remote – which allows you to use the phone’s IR blaster to control appliances around your home – and a Feedback app that provides a direct line to Xiaomi with bugs and suggestions. There’s literally nothing outside of the core apps, which will make the A1 a very attractive device for Android purists.

It isn’t quite as up-to-date as Google’s Pixel line of handsets, but the A1 – like other Android One phones – is sure to receive timely updates moving forward. Plus, since there’s no bespoke UI skin being laid over the top of the core OS, updates should come relatively quickly, making this a solid choice if you love stock Android but can’t afford a Pixel 2 or Pixel 2 XL. 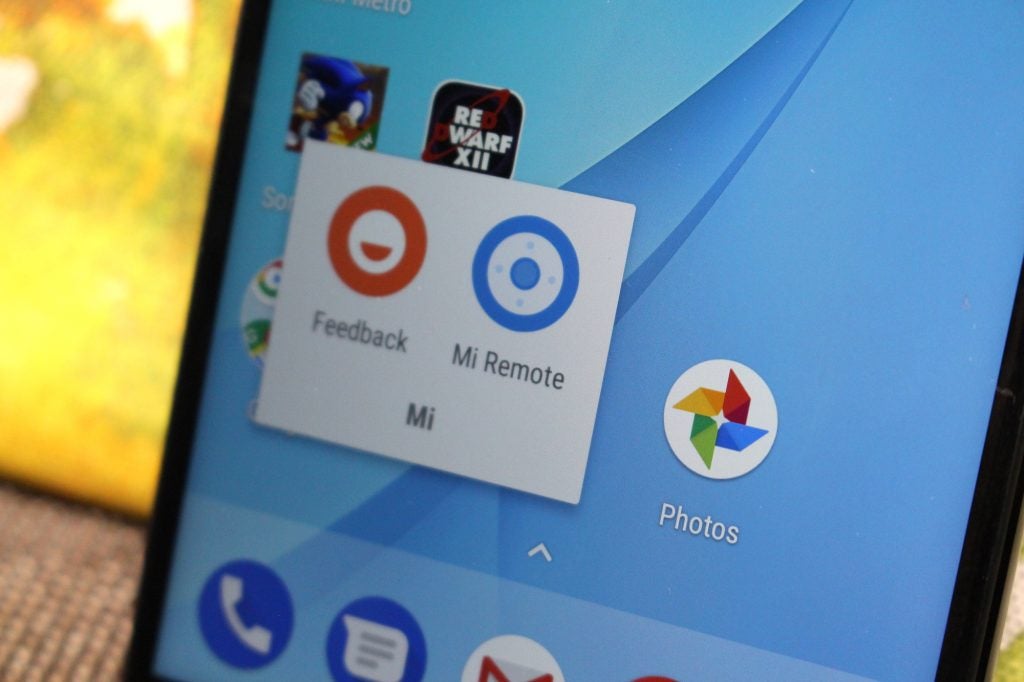 Powered by Qualcomm’s Snapdragon 625 chipset and blessed with 4GB of RAM, the Mi A1 is no slouch in terms of processing power. The fact that it’s running pure Android helps keep things nippy, too. It may not have the raw processing grunt seen in phones sporting the more powerful Snapdragon 835, but during our review period we didn’t notice any worrying slowness or stuttering, even when moving between several active applications.

Obviously, the fact that the handset has a 1080p screen helps; fewer pixels means less strain on the chipset, and it’s often hard to argue the wisdom of giving phones 4K screens when it’s impossible to pick out individual pixels on the Mi A1’s FHD display. Even when stretching 1080 x 1920 over 5.5 inches, the image remains pin-sharp. 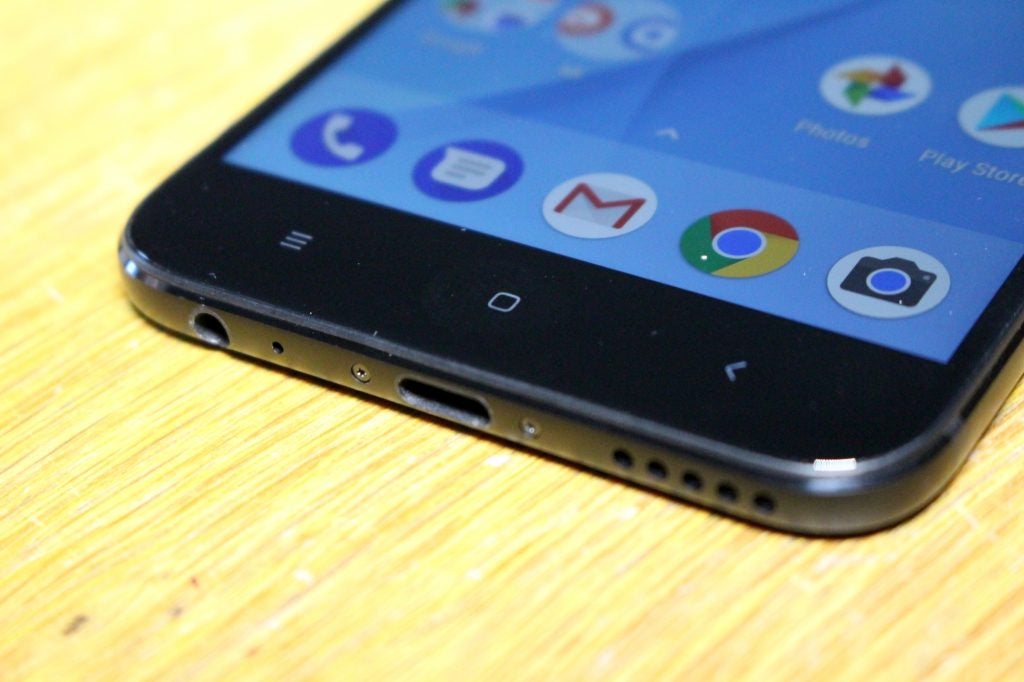 While the Snapdragon 625 isn’t going to win any benchmark awards, it’s more than acceptable for a mid-level phone. 3D gaming is a good way to test the power of any handset’s internal hardware and the Mi A1 performed well with games such as Real Racing 3, with only minor frame-rate wobbles when a lot of cars were on-screen at once.

Casual mobile users will find that there’s more than enough processing power on tap with this device, especially if all you’re doing is sending messages, browsing the web, listening to music and watching videos.

Despite those huge bezels, Xiaomi hasn’t chosen to equip the Mi A1 with a stereo speaker setup. Audio is pumped out of a single speaker located on the bottom right-hand edge of the device. On the positive side, the speaker is loud and offers a decent level of bass, and audio output through the phone’s 3.5mm headphone jack is also decent. Call quality didn’t blow us away, but was more than adequate on both sides of the conversation. 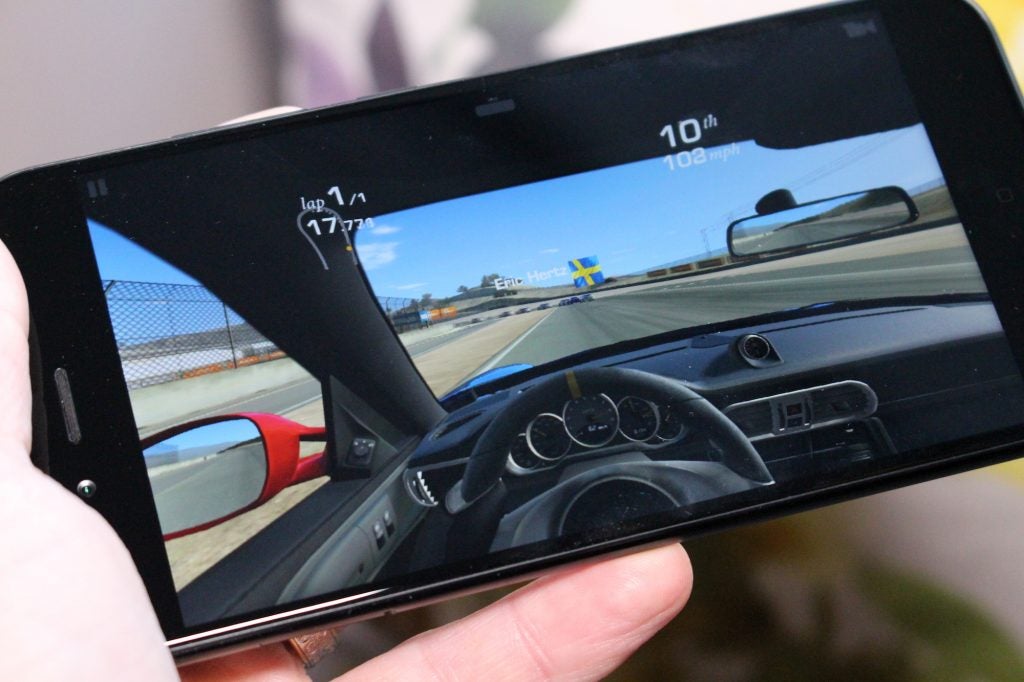 Sadly, NFC doesn’t make the cut, so you won’t be able to use the Mi A1 to make contactless mobile payments via the Android Pay application.

Xiaomi has gone big on dual-camera setups in some of its other leading phones, so it perhaps shouldn’t be a shock to find this configuration in the Mi A1.

Both sensors are 12-megapixel units, one offering a wide-angle view with a f/2.2 lens while the other is a telephoto snapper with a f/2.6 lens. Neither camera has optical image stabilisation, which is a shame, but expecting such a lavish arrangement in such a cheap handset is possibly a little naive.

Still, it feels as if the Mi A1 is punching above its weight. The telephoto lens can be used to capture some impressive shots – as long as you don’t shoot in low light – and it even comes with a Portrait mode that applies a depth effect to the background, similar to Apple’s iPhone range and Samsung’s “Live Focus” on the Galaxy Note 8 series.

The effect is super-impressive, enabling us to grab some professional-looking mugshots. The only downer is that the phone takes quite a while to read the scene and apply the effect. Even so, it’s amazing that this kind of feature is available on what is essentially an entry-level phone.

The Mi A1’s camera app is the only other element of the software into which Xiaomi has had direct input, using the company’s proprietary photo app, also seen on the Mi5 and Mi Mix 2. It’s clearly inspired by Apple’s camera software and even uses the same basic layout, but it works well enough.

You can easily apply filters to an image, and the panoramic shots it takes look great, with minimal stitching problems and good overall detail. Photo quality isn’t top-tier and the lack of OIS means you need a steady hand, especially in darker settings. But the camera is quick to focus and snap – which counts for a lot, even if the resultant images can be a little soft and overly-compressed when you zoom in close. 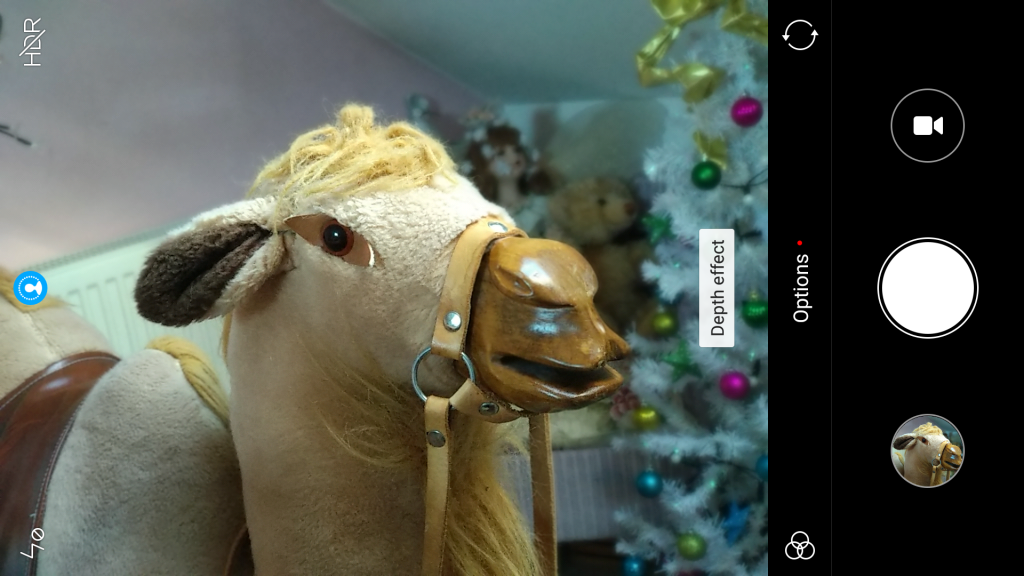 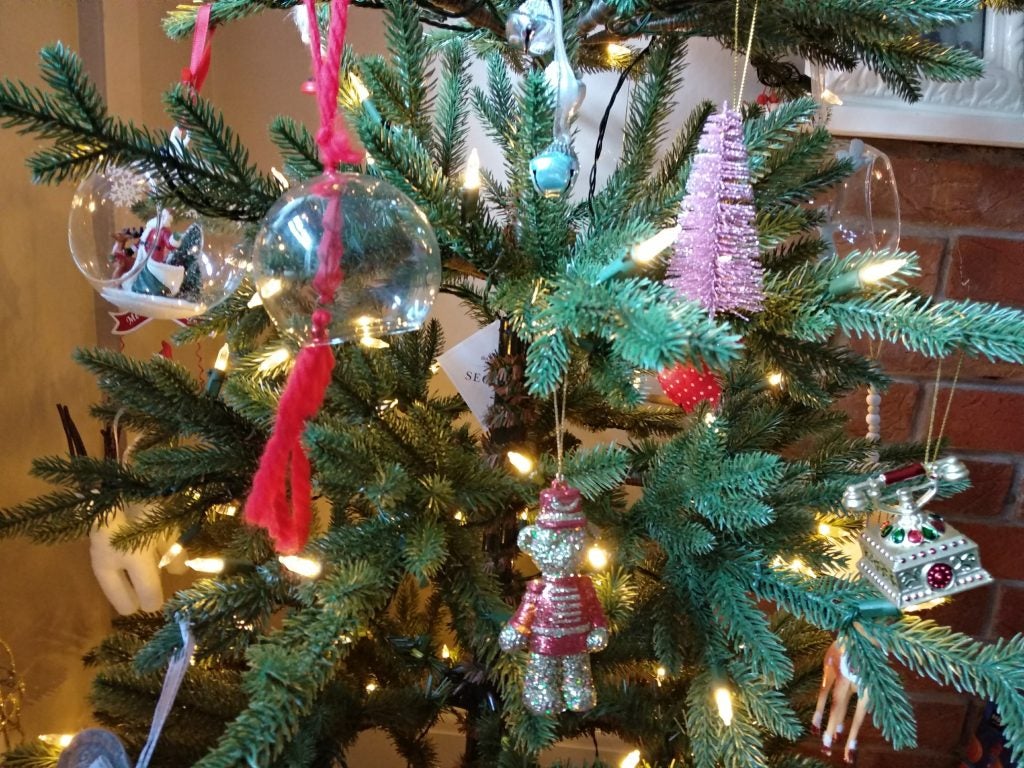 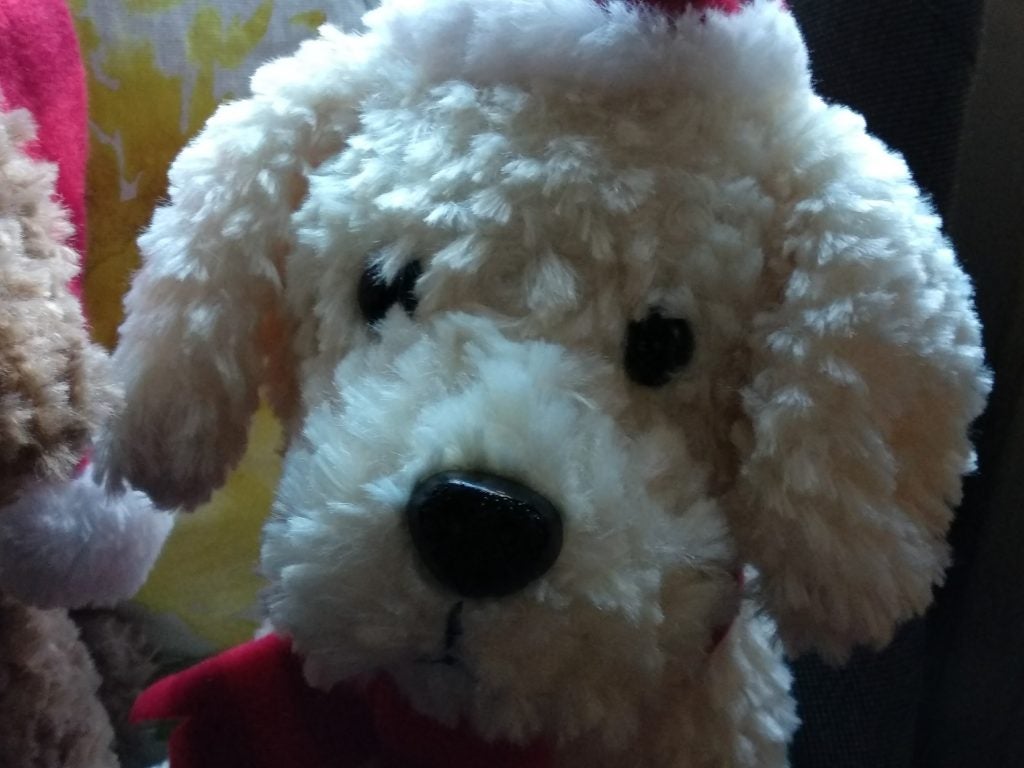 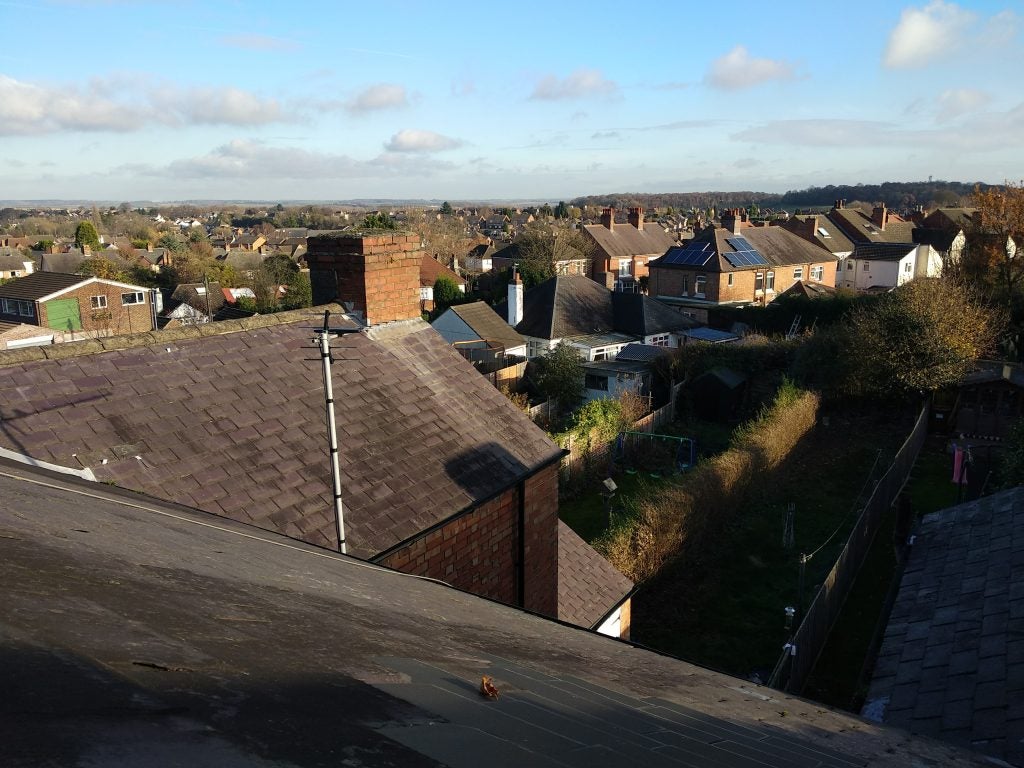 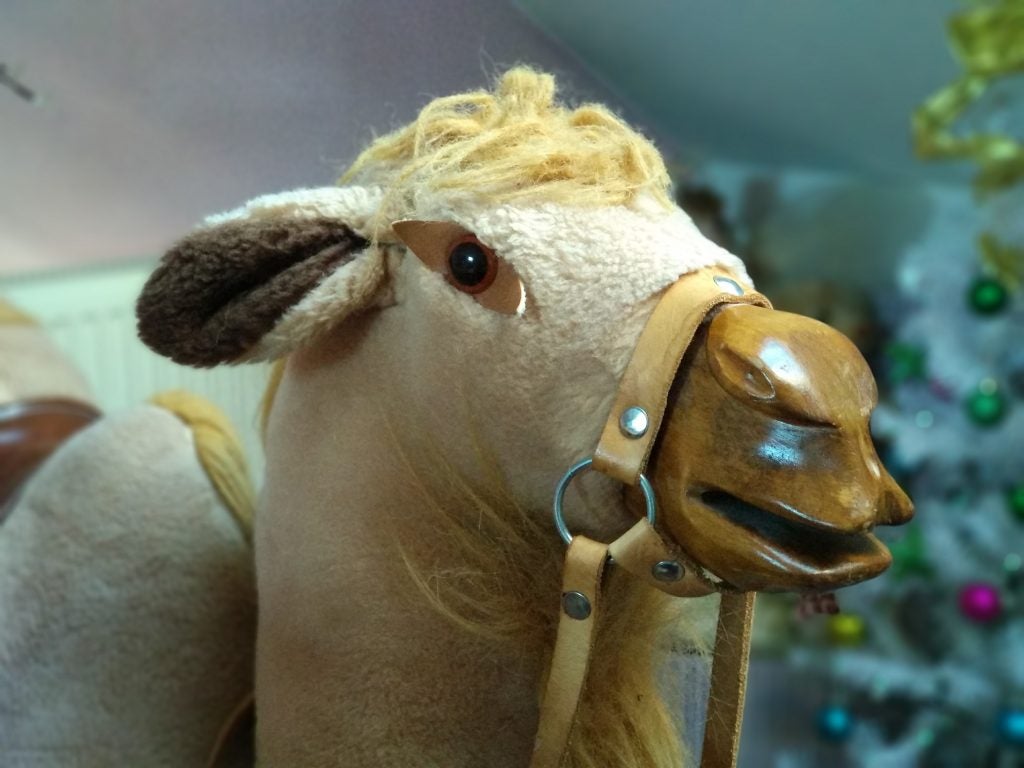 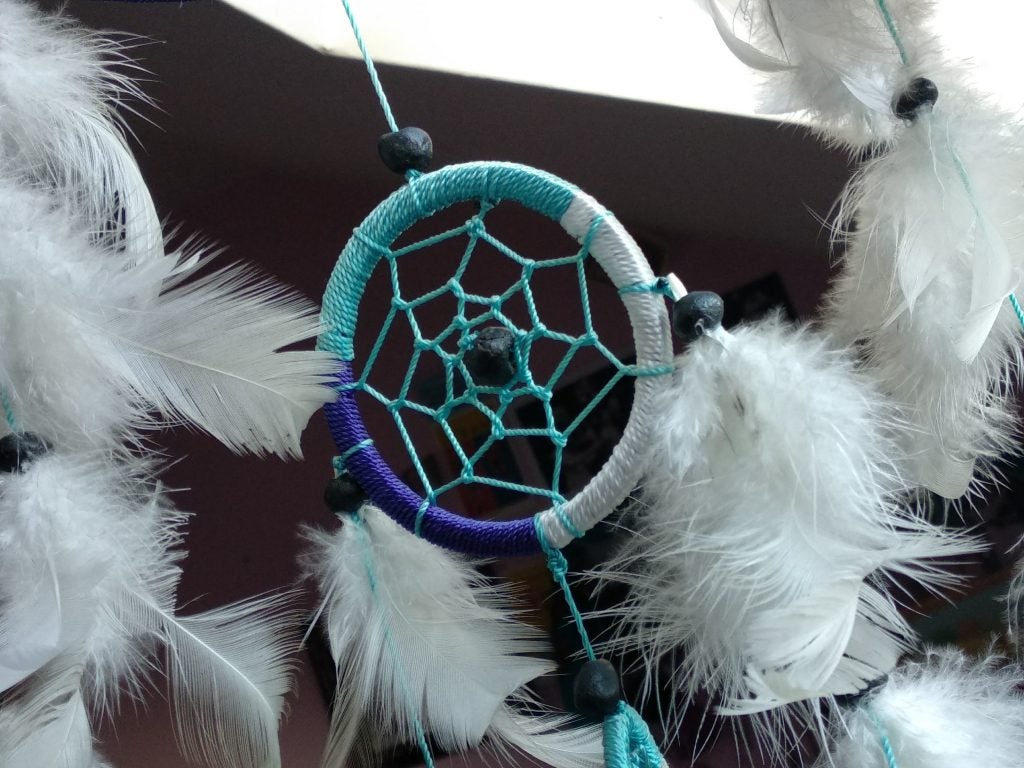 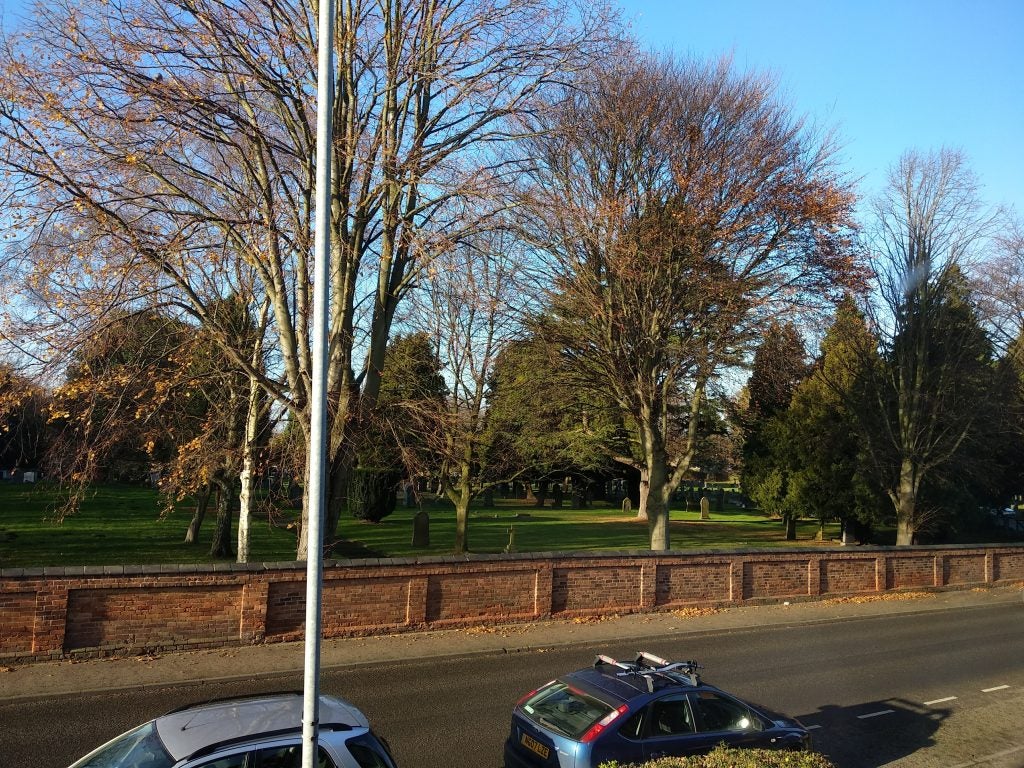 4K recording is possible at 30fps and also looks far better than it has any right to on a phone in this price range. Oddly, HD video is also limited to 30fps – 60fps would have been nice – and the quality is disappointing, with a general lack of fidelity ruining some videos. Audio recording is also quite poor, which is something we also noticed on the more-expensive Xiaomi Mi Mix 2. The phone is also packing a 5 megapixel front-facing camera for video calls and selfies, which does the job but isn’t remarkable by any means.

The 3080mAh battery inside the Mi A1 is a little on the small size for a phone with such a large screen, but we were impressed by its stamina – a possible result of the fact that it uses “pure” Android and isn’t packed with bloatware constantly sipping juice all day long.

With a typical usage pattern – surfing, music playback via Bluetooth headphones, email browsing and a little bit of 3D gaming – I  was able to return home at the end if the day with plenty left in the tank. 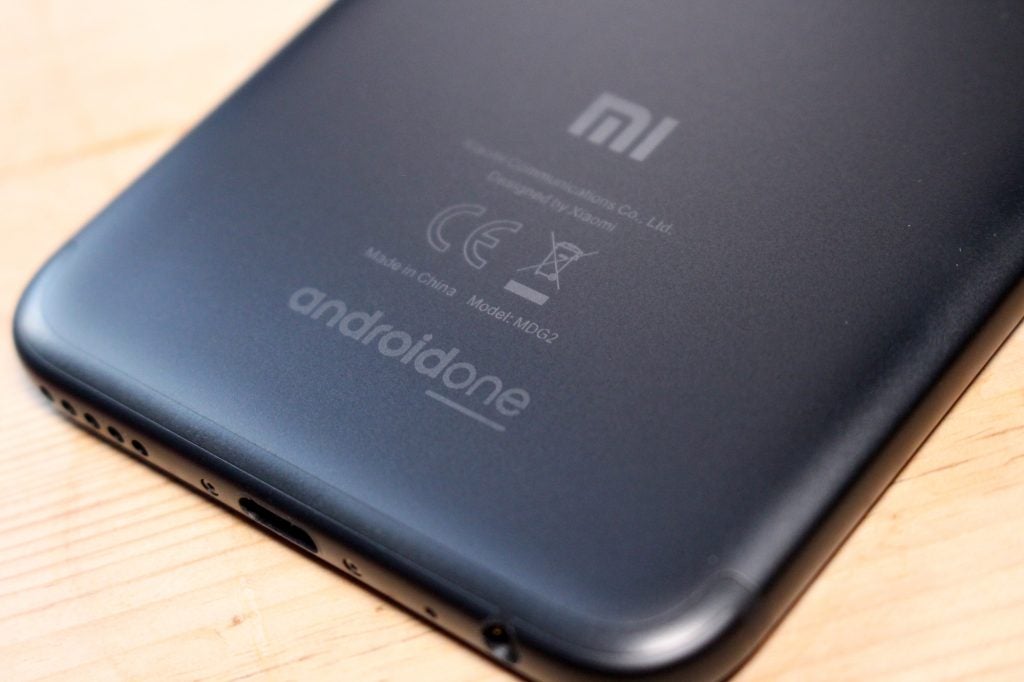 I would still recommend you charge the Mi A1 at least once a day, but it shouldn’t die on you before you reach the comfort of your front door.

Sadly, there’s no quick charging facility – despite the fact that the handset has a USB Type-C connection – so you can’t do fast top-ups before you leave for work in the morning.

64GB of internal storage is included, of which the end user has access to 58.24GB. That should be more than enough for most people. If it isn’t, you can use one of the phone’s SIM tray slots to install a microSD card.

Why buy the Xiaomi Mi A1?

While Google’s Android One initiative hasn’t had the best of starts, the Mi A1 is a massive stride in the right direction. It combines excellent hardware with pure Android software at an incredibly reasonable price point. This makes it an ideal phone for those who want to avoid carrier bloatware and sluggish UI skins but can’t afford a Pixel 2.

While it lacks luxuries such as OIS cameras, NFC, quick-charging and stereo speakers, for £200 it’s hard to grumble.

Thanks to The Solution Shop for supplying the unit used in this review.

The Xiaomi Mi A1 offers stock Android and a dual-camera setup for under £200, making its minor omissions easier to stomach. This is the phone with which the Android One initiative should have launched.