The world’s number one officially ranked gamer Johnathan “Fatal1ty” Wendel has for some time put his name to a range of motherboards and graphics cards from Abit. Recently though, a collaboration to design a new series of graphics cards with XFX was announced. Whilst most people would expect the first fruits of this partnership to be an all conquering high-end card, instead it’s actually a mainstream card, based on an nVidia 7600 GT GPU. Although this seems strange at first glance, it makes financial sense as the midrange market is much more lucrative than that of the bleeding-edge consumer. 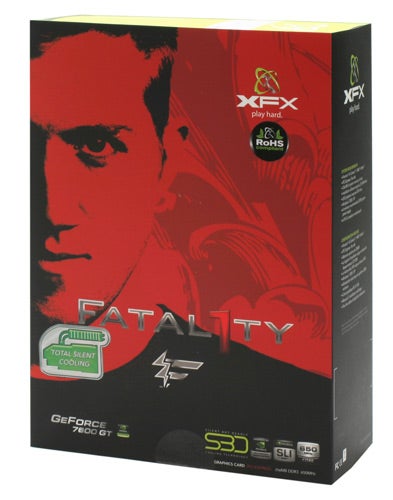 The addition of the Fatal1ty name to this card is not just about kudos. The card is pre-overclocked to such an extent that XFX claims that this is the fastest 7600 GT available. Not only that, but it also uses a passive cooling solution, making it completely silent. All this comes with a minimal increase in price (£5-£10) over standard spec cards, which certainly looks like a winning combination.


The card itself is dominated by its intriguing looking cooler. A core of copper is covered by a black aluminium heatsink, which also covers the surrounding memory chips. Two heatpipes run from within the heatsink to a large set of aluminium cooling fins which sit atop and round the back of the card. Although the cooler is not technically a single slot solution, having the cooling fins on the reverse means that if two cards are used in SLI it frees up more expansion slots – at least on most SLI motherboards. Even though the cooler is large it didn’t interfere with anything on our test bed, however the extra height may be a problem for smaller cases. Performance wise the cooler couldn’t be faulted, though you will of course need to ensure your case has good ventilation/airflow. 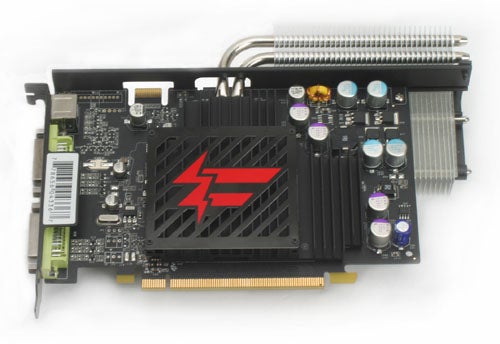 Even though I would never recommend a card based on its looks alone, a special mention has to be made for this card. The PCB, heatsink, back plate, and support bracket (for the cooling fins) have a matt black finish that looks great. This look is perfectly complemented by the polished aluminium cooling fins. Other details like the UV reactive green DVI connectors and the Fatal1ty symbol on the heatsink might be less universally appealing but they certainly set this card apart from the competition.


The retail bundle reflects the cards midrange stance including only a driver CD and no other software. Only one DVI to VGA adapter is included – even though both outputs are DVI. A decent quality S-Video cable is also included.


As mentioned above, the card is based on an overclocked GeForce 7600 GT. These chips are built on a 90 micron process and incorporate 12 pixel pipelines, eight pixel output engines and five vertex shaders. Standard clock speeds are 560MHz core and 700MHz (1.4GHz effective) memory, whereas the Fatal1ty comes in at 650MHz core and 800MHz (1.6GHz effective) memory. This is a substantial overclock for a retail product and actually makes it the highest clocked card on the market. As such, I would hope to see a noticeable performance improvement.


The GeForce 7600 GT has been king of the mainstream market ever since its release, back in March, when it took over from the previous midrange king, the 6600 GT – yes, nVidia really has been that dominant in this segment. However, ATI’s new X1650 XT is reputed to give the 7600 GT some genuine competition and we will be putting it through its paces as soon as we get one in. 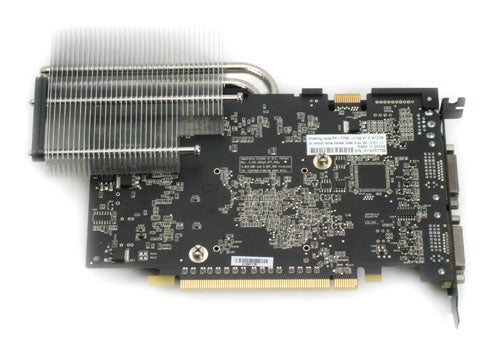 In the mean time, I’ve recalled the stock 7600 GT results from our nVidia 7600 GT vs ATI X1800 GTO article to compare to today’s results. I’ve also included results for the X1950 Pro and 7900 GS to see how this overclocked midrange card compares to the cut down high-end cards which are around £20 – £50 more. These results were taken using a different test bed than we use now – based on an Athlon 64 X2 FX60 rather than today’s X6800 Core 2 Duo – but scores should still be comparable. 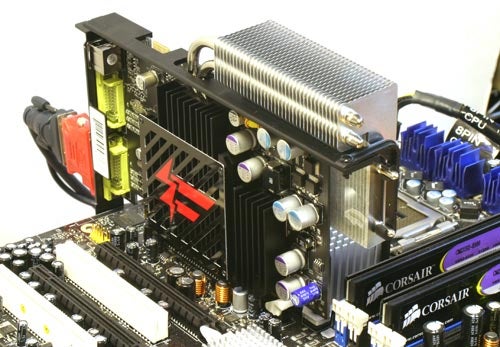 On average the Fatal1ty card is 18 per cent faster than stock ,which almost exactly corresponds with the overclock percentage, as you would expect. Results are also very even across the board, reflecting the fact that the underlying technology is identical. The overclock really shows its worth when compared to the more expensive 7900 GS and X1950 Pro where, even though results are more mixed, the Fatal1ty still holds its own. All of which would suggest this card is cracking value. However, it’s always worth remembering that the 7xxx series of cards don’t support HDR and FSAA simultaneously and still have poor quality texture filtering compared to ATI’s cards. So, if either of these issues is a concern, this may not be the card for you. If you are not adamant about getting a silent card then for an extra £25 an ATI X1950 Pro would be a very worthwhile investment.


Also, with DirectX 10 upon us, the longevity of this card is inherently limited.


If you’re in the market specifically for a silent card but your budget can only stretch to the mid-range then this card has a lot going for it. The overclock from this Fatal1ty version provides a noticeable and worthwhile boost that’s worth paying for and the card will also look great should you have a window in your PC.