With the recent launch of new graphics cards from both ATI and nVidia, you’d be forgiven for thinking that the demise of previous generation cards would be swift and merciless. However, that has yet proved to be the case, with ATI in particular, assuring us that the 3000-series of cards is here to stay for a while. Also, fresh on the back of some hefty price cuts old stalwarts like the nVidia 9800 GTX and ATI HD 3870 can still offer great value, especially when you look at some overclocked cards. It’s with this in mind that we’re looking at the XFX 9800 GTX Black Edition – the most highly overclocked 9800 GTX we’ve yet come across. 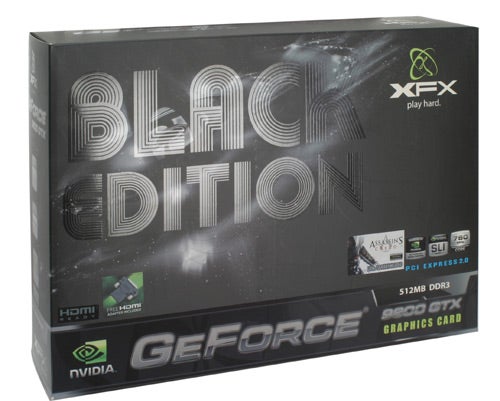 As you would expect, given the name, the packaging is a mostly black affair which will certainly catch the eye on a shop shelf – assuming that you can find a shop that sells graphics cards anymore. Inside, as well as the card itself, you get a very healthy bundle including both DVI-to-HDMI and DVI-to-VGA dongles (in fact you get two of the latter) as well as an S-Video cable and component dongle. There are also two dongles for converting two Molex power connections to a single 6-pin PCI-Express connection for use with older power supplies. Finally, at least on the hardware front, there’s an S/PDIF cable that can be used to connect your graphics cards to your sound card and output digital audio over you graphics cards’ HDMI connection.


On the software side you get the a copy of Assassin’s Creed, which is worth a few bob. It’s not the most modern title and it certainly didn’t quite live up to the hype but it’s a welcome addition nonetheless. You also get a driver and utilities disc and a miscellany of well written quick installation guides and information cards. Oh and of course the essential, ‘I’m Gaming, Do Not Disturb’ door handle tag! Woo! 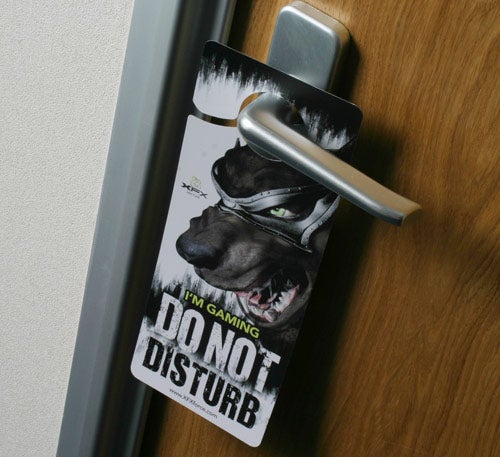 As for the card, well, it’s an nVidia GeForce 9800 GTX with a sticker on it. Although XFX’s internal tweakings have pushed the card’s performance, the cooler and the rest of the card’s design is just the same as any other 9800 GTX, which just goes to prove how good nVidia’s reference coolers have been of late.


Along the top edge of the card are the twin SLI connectors that can be used to join two or even three of these cards together for more performance. Also up here are the two extra power connectors that are needed to keep this thirsty card running. Two dual-link DVI sockets (which are HDCP enabled) grace the double width back panel along with an analogue video output socket that supports S-Video natively and component and composite with the help of dongles. This is the standard output configuration we’ve come to expect from cards in this price range. 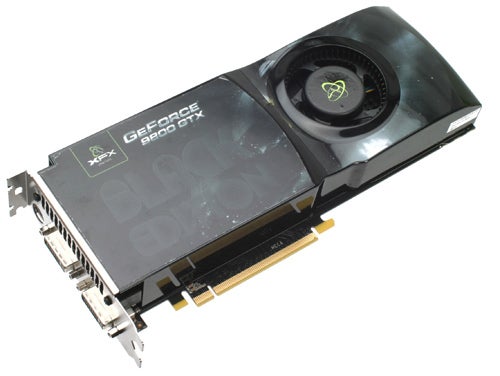 The back of the PCB is covered by a metal plate, which helps protect the delicate electronics resident there and also performs some additional heatsink duties. This is a feature we first saw on the 9800 GX2 and it’s one we’ve come to appreciate, especially as the regularity with which we’re swapping cards around in our test bed requires us to manhandle them more than would otherwise be good for them – does anyone ever really use those anti-static wrist bands?

Of course the key selling point of the Black Edition, aside from its impressive overclocking figures is its price. On the back of nVidia implementing some severe price cuts XFX has also taken an aggressive stance with pricing for this particular card. Whereas many 9800 GTXs are still demanding around £200, Scan already has the Black Edition listed on pre-order for £168.


This pricing means the card fits in perfectly within nVidia’s current range, sitting comfortably below the GTX 260. In fact, it also falls squarely in-between ATI’s HD 4870 and the HD 4850 so in fact it has no direct price competition, which is always going to help its cause.


For testing we ran through our usual set of gaming tests and also measured the power draw of our test bed with this card installed. The test setup is as follows:


Looking first at power draw, it’s clear the overclocking required some internal voltages to be increased as both total idle and load power draw have also risen slightly. The difference is pretty negligible and is still below both the GTX 260 and the HD 4870, though.

In terms of performance, the card equips itself pretty well though the impact of the overclocking varies from title to title. Most notable, perhaps, are the results for Crysis that see the Black Edition being nearly 40 per cent faster than a standard card and comfortably faster than the HD 4850. The HD 4870 is still on average considerably faster, though, and as it costs only £20 – £30 more we’d be inclined to save for that card. That said, if you can’t spend anymore the Black Edition is a great value option. Indeed, it’s probably the best value nVidia card available at the moment.

Our only real gripe is that the card is rather large. Sure it’s only about the same size as an HD 4870 but then that card is considerably faster. Also, the HD 4850, although slower, is half the width and markedly shorter. It’s not something we’d term a deal breaker but it will certainly be of concern for some.


XFX has got the pricing and performance of the 9800 GTX Black Edition just right with it sitting just inbetween the ATI HD 4850 and ATI HD 4870 on both counts. If you can push your budget we’d still recommend gunning for the ATI HD 4870 but if you can’t stretch any further then you can’t go wrong with this card.