Fast, workgroup, colour laser printers still attract a price premium, but this 40ppm device from Xerox is available over the Internet for not much more than £750, which is quite a bit less than some of its competitors. Speed is not the only criterion, though, and you need to assess the full feature set.


This is a big printer, weighing in at over 35kg and bulging out at the front and top. It’s best suited to being mounted on its own stand and tucked away in the corner of an office, rather than taking up most of a desk. There are some unusual design choices, such as positioning the four colour toner cartridges under a translucent purple cover at the back of the machine’s top panel. While this makes them supremely easy to replace, it’s also an invitation to tampering.


The small, backlit LCD display shows up to six lines of small text, but this at least enables a comprehensive menu system. Next to the display is an archipelago of six buttons to navigate the menus. 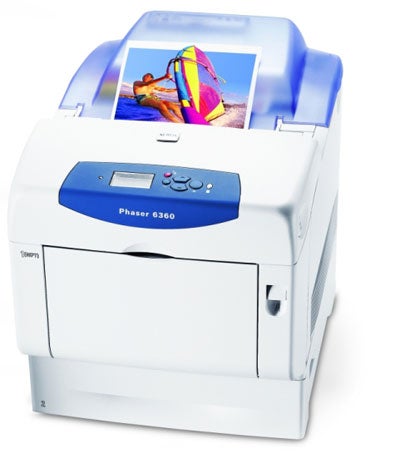 A 550-sheet paper tray pulls out from the bottom of the machine and there are options for further 550-sheet and massive 1100-sheet trays. You can also add a hard drive for extra job buffering and a duplexer. Despite the printer’s substantial bulk, it’s a single-sided printer by default. There’s a 150-sheet, multi-purpose tray which folds down from the front and all paper exits to the top surface of the printer.


At the back are sockets for USB and Ethernet, though wireless networking is an option.


This is an in-line printer with a transfer belt sliding in from the top, once you’ve lifted two covers. It’s also primarily a PostScript printer, with a full Level 3 Adobe interpreter on-board. In fact, installing the PCL 5c driver involves a visit to the Xerox site and offers quite a bit less in the way of colour control than the PostScript driver. Our speed tests suggest you should stick to PostScript, unless PCL 5 is essential to your work.


As well as the drivers, the only other software is the Xerox Support Centre, which is more an organiser for the printer’s online documentation than anything else.


The in-line design means colour and black pages print at the same speed and our five-page text print completed in 18 seconds under PostScript and just a second quicker in PCL. The text and graphics print reversed the winning order, with PostScript taking 18 seconds again and PCL a second longer.

This gives the machine a maximum speed of 17ppm under real-world conditions. We like to see a printer reach half its rated print speed when printing our typical five-page jobs and, obviously, the Phaser 6360VN didn’t quite make that. Subjectively, though, it prints pretty quickly, with a 15 x 10cm photo print taking just 12 seconds; five photos per minute is impressive.


You might expect the print quality from a Xerox machine to be above-average and for black text, we have few complaints. It’s densely black, with no visible spatter and characters are well-formed, with high contrast. There’s a bit of registration difficulty with some colour text, but block colours are generally well handled and text-over-colour also looks sharp. 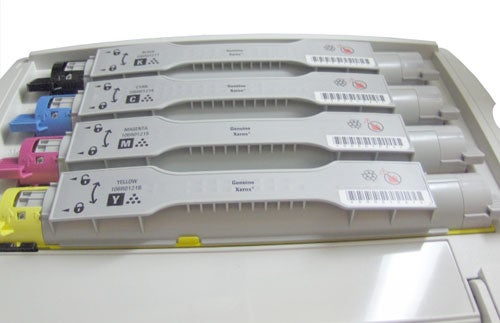 There are several options for printing colour images such as photographs, and some of these slow print time considerably. The enhanced print mode offered in the PostScript driver does make a difference to output quality, but detail is good, anyway, and the only real fall-off is a rather patchy reproduction of the variegated sky in our test print.


Xerox includes software it calls the Walk-Up driver, which is something like a universal printer driver. The idea is that you load this driver on your laptop and can then print to virtually any recent Xerox printer when you’re away from base, but obviously only in a location which uses Xerox machines.


The costs of running this machine breaks down into a number of parts. The toner itself is available in two capacities – standard and high yield – with high yield cartridges producing 18,000 black pages or 12,000 in colour. So they should, as each of the colour cartridges is £176, with the black one coming in at £105. A complete set is over 80 per cent of the cost of the printer. 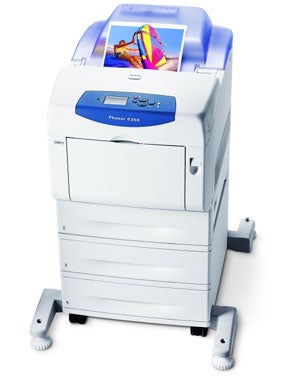 Although the actual price of the cartridges looks high, and you have to factor in an imaging unit and transfer belt every 35,000 pages and a fuser every 100,000 pages, the actual cost per page comes out at 2.01p for a five per cent black text page and 6.05p for a 20 per cent colour one. While these figures aren’t the best we’ve seen from a workgroup printer like this, they’re not unduly high and with the comparatively low purchase price should give you a good, overall cost of ownership figure.


As long as you’ve got a couple of strong people to set this printer up, it provides a good, reasonably fast, colour printing resource for a workgroup or small department. Running costs are average, but cost of ownership should be a good bit lower than average. You have to keep an eye on four separate sets of consumables, but both toner and maintenance parts have extended lifespans, so not too much fiddling around.