The size and price of the colour laser printer continues to reduce and the Phaser 6125, from Xerox, patrols new frontiers on both. At £120 and less than the size of many workgroup mono lasers, this SOHO machine offers the pleasures of business colour print to companies with little to spend on new print equipment.


If any colour laser printer can be described as cute, the Phaser 6125 is it. In Xerox’s clean, white case colouring, with the deep blue control panel highlight, the machine seems hardly deep enough to take a sheet of A4 paper. This is because it isn’t, and has the end of its paper tray protruding out the back, where you can’t see it. The design strives all the time to make the machine appear smaller than it is and in most areas, it succeeds. 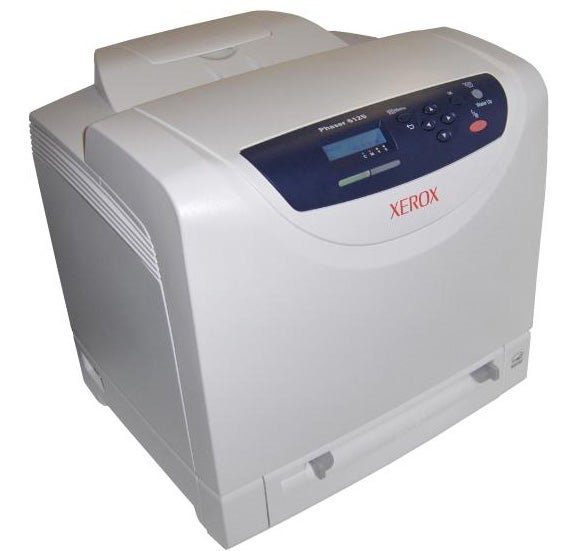 The moulded paper output tray has a flip-open extension, but this is largely for US legal paper and if you’re printing A4, you’ll be able to leave it closed. There’s a 250-sheet paper tray, with a single-sheet, multi-purpose feed slot directly above that. There’s no way of expanding the paper handling with an additional tray, though, either to increase the paper capacity or to run more than one paper type at once.


The control panel is well featured for an entry-level colour laser. It has a two-line by 16-character, backlit LCD display, with large, attention-getting green and red LEDs indicating status. Menus are controlled with a diamond of arrow keys, though as with several printers we’ve seen recently, the conventions of moving up and down the menu hierarchy with the up and down arrows and flipping through options with the left and right arrows doesn’t work here; it’s the other way around.

Even though the machine is very much entry-level, it has a network connection as standard, and there’s USB as well, of course. A wireless adapter as an option, as is extra memory to boost the 64MB fitted as standard to this host-based machine. It doesn’t use a page description language such as PCL or Postscript, but specific drivers are available for Windows, OS X and at least five versions of Linux.


The photoconductor drums, toner cartridges and fuser are all pre-installed on the machine, though you have to remove tapes and paper and lock each toner cartridge into position before you can start using the machine. Instructions are clear and installation only takes 10 minutes.

Xerox has been fairly optimistic with its speed figures and quotes 16ppm for black print and 12ppm for colour. Our five-page text print took 39 seconds, including time labelled on the printer’s control panel as ‘processing’ and ‘calibrating’, things it seems to do for most print jobs. This gives a speed of 7.69ppm for this document, but when we increase the page count to 20 pages, the speed goes up to 10.5ppm, which is respectable, though still some way below 16ppm. 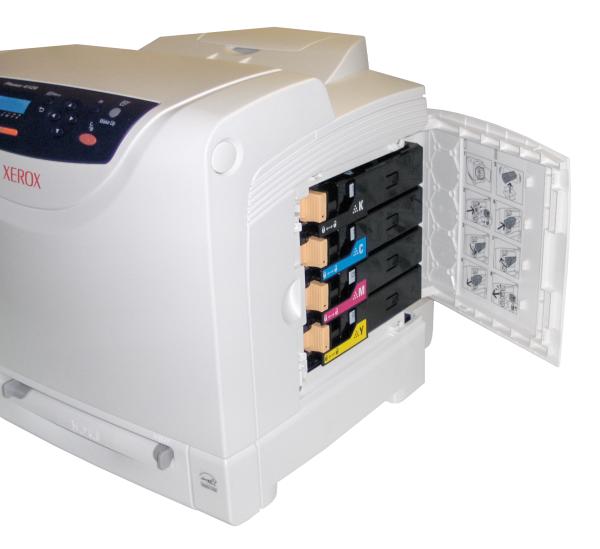 Print quality, from the 600dpi engine, is clear and sharp, with no signs of spatter around characters and even small font sizes looking smooth with good curves. Colour graphics are also generally good, with bright, smooth colours, though there was some mis-registration of black text over coloured backgrounds. This occurs when a printer knocks out space for the overlaid text and the printing of that text is slightly misaligned with the white space of the paper.


The photo test image was darker than it should be and colours skewed towards the red end of the spectrum. Some adjustments can be made for this by experimenting with the different colour presets, but it’s not the ideal laser for reproducing photos.


The only quoted consumable is the toner cartridges, but these aren’t cheap. With the 2,000-page black cartridge costing just under £45 and each of the 1,000-page colour cartridges costing around £38, the cost per page comes out at 3.09p for black and 14.6p for colour.


The Xerox Phaser 6125’s big advantage is its very low purchase price. It produces worthwhile laser prints in mono and colour, as long as your work doesn’t concentrate on photo images, and it prints reasonably fast. It’s more expensive than some of its contemporaries to run, and surprisingly quite a bit more than some colour business inkjets, though that’s true of its laser rivals, too.