Xerox is perhaps not the first company you would think of when considering a conventional colour laser printer, but the Phaser 6120, a new addition to Xerox’s range, is attractive in both price and print quality. If it seems more than vaguely familiar that because it’s based on the Konica Minolta Magicolor 2450 we tested six months or so ago. Comparing the asking prices for the two versions of the printer, the Xerox machine comes in around £80 cheaper than its Konica Minolta sibling.


Decked out smartly in navy blue and cream, the Phaser 6120 is a substantial machine, but not over bulky. Paper is loaded in a single, 200-sheet, multi-purpose tray at the bottom front and feeds through, to exit onto its top cover. You can buy a second, 500-sheet tray to sit under the machine, but as standard there’s no easy way to feed single sheets of special media.


A circle of four buttons, with a fifth in the centre and a separate cancel button, are all the physical controls for the printer. There’s a two line, 16-character LCD display, but this is hard to read, due to reflections and the lack of a backlight. We still find it hard to believe the cost of a backlight, even on an entry-level colour laser printer, can’t be factored in to its parts list.


At the back are sockets for USB 2.0, parallel and Ethernet network connections. Network accessibility is standard on this model and supporting software is provided on the driver CD. 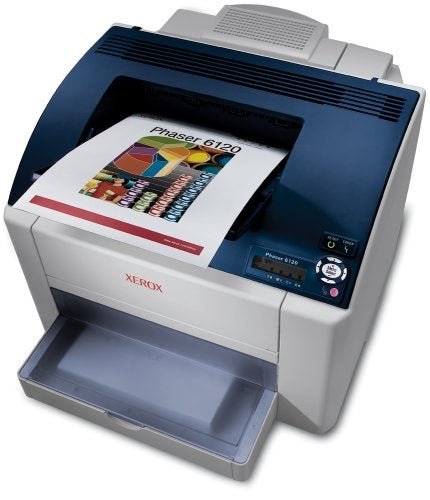 The four toner cartridges and the imaging drum all slot into place, once you’ve lifted the top cover and folded down the front but, conveniently, they are supplied pre-installed, so you only have to remove transit spacers to get going.


This is a carousel-based laser printer, so the image is built up in four passes of a transfer belt, where each colour is added to the image before being transferred to a photo-sensitive drum for printing.


The standard Xerox driver is unusually flexible, offering page impositions of up to 16 pages per sheet, booklet printing, size reduction and duplexing (only with the optional duplex unit). You can print overlays on top of your pages and watermarks underneath them, and you can select a variety of different colour matching formats, including ICM.


The printer’s physical resolution is 600dpi, but with software enhancement this increases to 2,400dpi. This is the default mode for printing.

Colour print quality of laser printers is not yet up to that of inkjets, because of the much smaller colour gamut (range of available colours) of solid, toner-based inks, compared to that of liquid inks. That said, the output from this Xerox Phaser 6120 is very good.


Both solid colours – as in business graphics – and photos are reproduced with surprising accuracy. Photo images are also free of noticeable banding and colour is smoothly graduated in areas of sea or sky. Even shadow detail is better reproduced than on many other colour lasers we’ve tested.


We measured print speeds of around 10 pages per minute for black text and just over 2ppm for colour. Both of these results are about half Xerox’s claims, but all printer makers still quote draft print speeds. You can add an extra 30 seconds onto the first page-out time, too, if the machine has been resting in standby mode. It also takes a little over a minute for internal diagnostics and set up when you switch it on at the start of the day.


As we mentioned, this printer is based on a Konica Minolta design and in theory at least you could use Konica Minolta consumables with it. That would be an advantage, as they’re marginally cheaper than the best Xerox prices we could find. 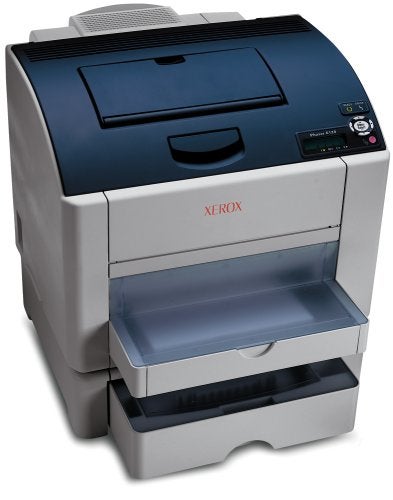 There’s one, high yield black cartridge available, producing 4,500 5 per cent pages, but each of the three colour cartridges is available in standard and high-yield versions, with the standard-yield parts offering 1,500 pages. The imaging unit is claimed to last 20,000 pages of black text, but only half this number if you’re printing in colour. In a small workgroup environment, you could get through 10,000 prints quite quickly.


Using Xerox consumable prices for its high-yield cartridges, we calculate a 5 per cent black text page to cost 2.19p and a 20 per cent colour page comes out at 9.12p. These prices are reasonable for this class of printer.


The Phaser 6120 is worth considering for its colour quality alone. While it has a couple of minor flaws, such as the lack of a special media tray and a backlight for its LCD display, it produces quality colour graphics, and makes a much better than average attempt at colour photos, too. Shop around for the best deal on consumables, though.