Office printing is divided into two main technologies: laser, in which we include LED, and inkjet. There is a third system, though, known as solid ink printing, which should perhaps be added to the inkjet category as a variant. Solid ink is a bit of a misnomer, as the ink is melted before being squirted onto the paper; it’s more like ‘hot inkjet’. 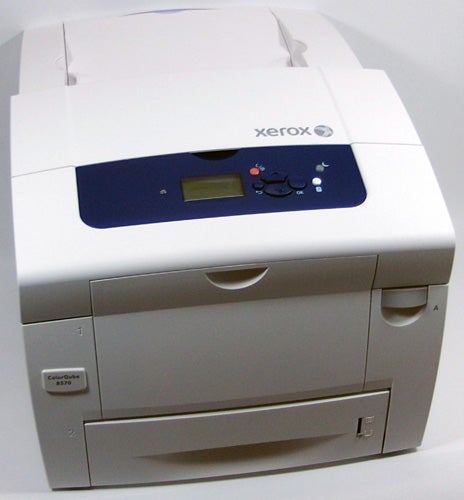 The technology was pioneered by Tektronix, but the company was bought be Xerox 10 or more years ago. Xerox has continued to develop solid ink and markets a range of printers using the technology, in parallel with its laser printers. The ColorQube 8570ADN is at the lower end of the range, but is still intended as a high-speed workgroup printer, with plenty of expansion potential.


This is a big machine, all decked out in white with a deep blue control panel as a highlight. It has an unusual shape, with its top surface forming two small ‘waves’. Paper feeds out from the rear of the front wave and comes to rest on top of the one behind.

The control panel has a layout similar to those on Xerox’s laser printers, so there’ll be minimal relearning required, if you already have the company’s page printers in the office. It has a five-line, bitmapped and backlit LCD display, with six buttons for menu navigation and job control.


At the front, the main paper tray can take up to 525 sheets of paper. A pull-down, multi-purpose tray offers a further 100 sheets and you can add up to three more 500-sheet trays as options. Fully expanded, this machine can feed up to 2,125 sheets. 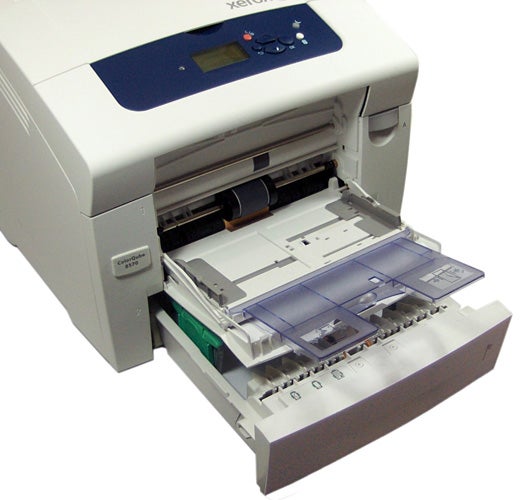 At the back are sockets for USB and gigabit Ethernet networking and these sit behind a pull-off cover, which also hides the mains power socket and smart switch, which doesn’t allow a switch off without a proper shutdown cycle.


The printer uses solid blocks of ink, one for each of the four primary colours, and you drop these into slides, beneath a hinged top cover. Each block is shaped to fit only the hole at the top of the correct slider, like those baby toys for posting blocks into a tub. 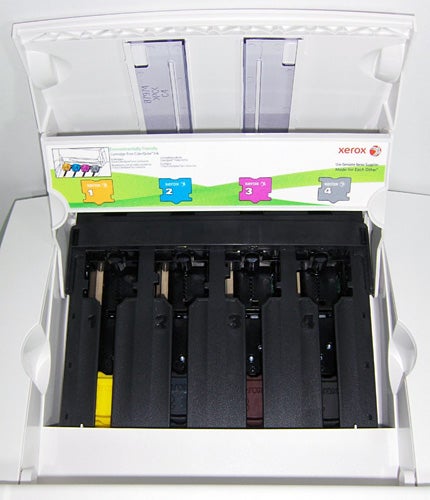 The block at the front of each line is heated inside the printer, melting the ink at around 100°C. Xerox recommends leaving the printer on overnight, but if it’s turned off, it’ll take a few minutes to warm up at the beginning of each day, before you start printing.


Drivers are provided for Windows and OSX and offer genuine Adobe PostScript L3 and PCL5 in emulation.

Xerox rates the ColorQube 8570ADN at 40ppm, which is very fast. Unfortunately, even when the printer is fully awake, and it takes a little longer to wake up than most, it doesn’t reach this speed in typical use.


Our five-page text document returned a speed of 12.5ppm though, surprisingly, the text and colour graphics document was 50 per cent faster, at 18.8ppm and the 20-page text test gave 24.5ppm. A very respectable speed, but a good way off the 40ppm on the spec sheet.


Where the printer does particularly well is printing duplex documents. The 20-page document printed double-sided gave a speed of 22.2 sides per minute, faster on a page-image basis than printing single-sided. 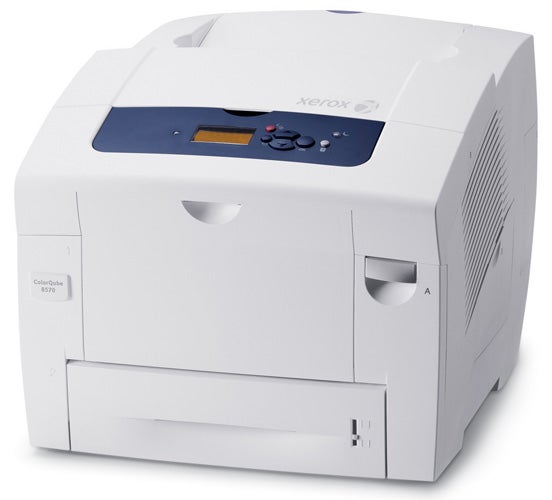 Prints are particularly clean and sharp, with bright colours and a slight sheen to the ink, which many people like. Blues and greens come through dark, though, and this is also reflected in loss of detail in dark areas of images.


A quick word about sound levels, which peaked at 79dBA from half a metre. This is very loud, a lot noisier than from any laser printers we’ve tested recently and a function of the fast paper feed mechanism. Best not to position the ColorQube 8570ADN next to anybody’s desk.


The main consumables are the solid ink blocks, though the printer does also need a periodic cleaning kit. Even so, the running costs come out at 2.6p for an ISO black page and 11.1p for ISO colour, both including 0.7p for paper. These are very competitive costs when compared with laser printers in the same price bracket.


This is a good, business printer for use in a busy office, but you have to wonder why you would choose a solid ink printer rather than a laser. The original solid ink machines were aimed at busy graphic designers and were often used for page proofs in publishing houses. Xerox pushes the low overall energy footprint of the machine, but this might not be enough to make the ColorQube 8570ADN your favoured choice…