You have to love a game that doesn’t get wrapped up in its own mythology. Few games on mobile ever reach Metal Gear Solid levels of self-infatuation, which is probably just as well, as smartphones aren’t really a comfortable platform for even the briefest of cut scenes or reams and reams of plot.

Xenowerk is one such game that has all the potential to indulge its own narrative a little too much – a mass of mutants being bred after a science experiment goes wrong in a secret, underground laboratory. But rather than overloading you with needless detail, developer Pixelbite has forgone the pain of pushing an opening cut scene upon you, or even a splurge of text detailing a back story, opting instead to drop you straight into the action.

From within about 15 seconds of first hitting Xenowerk’s app icon on my home screen, I was shooting down mutants aplenty with a machine gun. 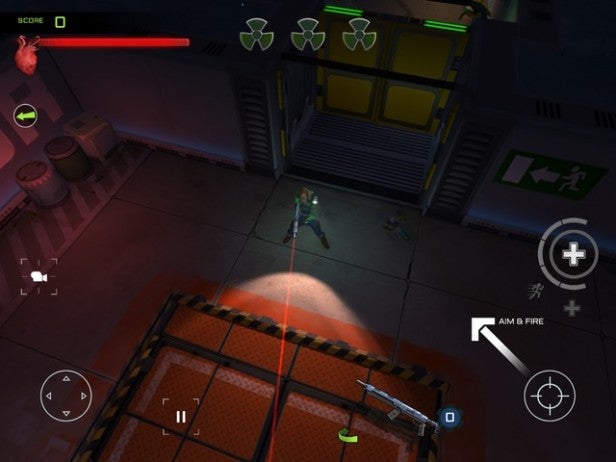 This is essentially what Xenowerk has to offer from beginning to end, with the game serving up action in short, manageable chunks. In each level you have a goal to tick off – typically picking up info from an unguarded computer, or shooting down the stage’s biggest mutant – before heading to the exit and down to the next zone, further into the earth’s crust. The stages themselves are fairly simple, though as you’d expect, with each passing level the number of rooms on offer and the mutants patrolling them begins to increase.

Action in Xenowerk never feels in any way unmanageable, however. The mutants themselves (who typically look like the result of the offspring of your average Jeremy Kyle guest and the kind of fungus  you see growing in the corner of a damp shed) aren’t especially tricky to deal with – backing off and firing as they scuttle in your direction typically enough to see them off – and both your primary and secondary weapons typically keep apace with the quality of your foe, ensuring you’re never swamped. 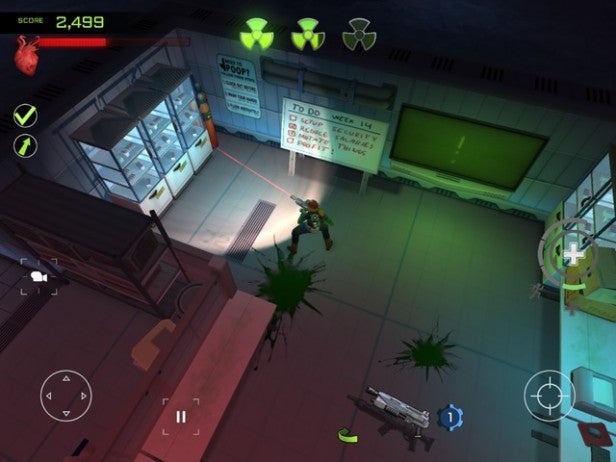 Indeed, Xenowerk even features a re-spawning system, meaning that should you get ripped apart by the approaching mutants, you can either choose to start the level afresh or simply pick it up where you left off. While purists might consider this something of a cheat, in the context of a mobile game more likely to be played on the tube on the way to work rather than during an hour long session a home, it’s the perfect way of ensuring you don’t give up and move on without completely undermining the challenge.

What’s more, you’ll actually want to complete each stage without re-spawning simply because it’s very easy to like Xenowerk. Its twin-stick approach – moving with the left, firing with the right – is in no way new and there’s very little about what’s on offer here that you could truly claim was in any way original or even inventive, but that doesn’t stop it being incredibly polished and, as a player, entirely rewarding experience. 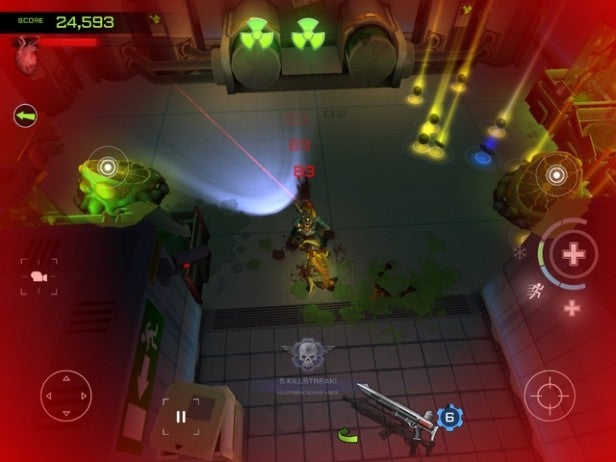 There’s also a lot here that we’ve come to take for granted from iOS games of late. The lighting effects are especially impressive, the game runs especially smoothly considering all the action contained within and, despite looking incredibly generic on the surface, once you start to get your claws into the 50 levels on offer, there’s actually a notable amount of atmosphere contained within Xenowerk’s endless corridors.

It all means that, while it would be incredibly easy to overlook Xenowerk when browsing the App Store or Google Play (it’d be hard to say that the game has a ‘unique selling point’ in any shape or form), it’s equally difficult not to recommend it, simply because it has bags of what many other, perhaps more creatively ambitious games can boast: fun. As such, it’s unlikely Xenowerk will make many ‘all time’ lists in the years to come – or, indeed, any run downs of the best games of 2015 – but for as long as it lasts, it’s a neat little shooter, offering the kind of bullet fest unrestrained by an overbearing that’s all too rare a story on mobile.

What Xenowerk arguably lacks in originality, it more than makes up for in terms of fun and general polish, with developer Pixelbite delivering a game that perfectly measures the way people play mobile games and matches it with nuggets of digestible action. It’s unlikely to make any great impact on the genre, but it will deliver a whole host of entertainment for those looking to mow down a mutant or two.