Exclusive to Nintendo Wii U
If you want to get into the Wii U’s biggest RPG, then you need to be sure that you’re ready for the long haul. While it’s always a striking, visually-impressive game, punctuated by moments of awe-struck wonder, it takes half-a-dozen hours to even get interesting, and roughly half-a-dozen more to get you in its grips. It’s a game that seems hell-bent on exposing all its weaknesses within the first hour, but holding off its strongest features until you’ve already proven your commitment. In terms of accessibility, Xenoblade Chronicles X makes Fallout 4 look like Call of Duty.

It’s also fascinating to see the influences at work here. It looks like and has the combat systems of a classic JRPG, but has a much looser narrative and comes set in a massive open-world. It’s predominantly a single-player game, yet – like Lighting Returns: Final Fantasy XIII – it borrows more from MMORPGs than it does from the average Final Fantasy or Dragon Quest. It’s a Sci-fi game, but one that seems in thrall to Capcom’s Monster Hunter series. You can probably work out from those reference points whether Xenoblade Chronicles X will be your cup of tea or not. 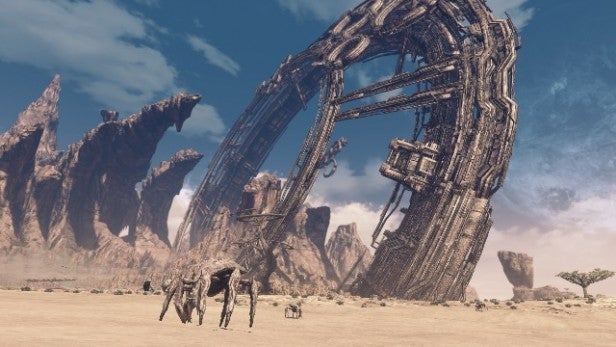 It’s certainly ambitious. The whole premise is that Earth, caught in the crossfire of an intergalactic war, has been abandoned and subsequently destroyed. The remnants of humanity survive in giant ark ships, barely any of which escaped the Earth’s destruction. One of these ark ships makes it out into deep space, only to be attacked by forces unknown. The ship crash-lands on the surface of an alien planet, Mira, its different sections scattered but its core habitat structure mercifully intact. Those alive and awake begin a search for the survivors, awakening those they find from cryogenic slumber while battling to gain and maintain a foothold on a hostile world. You begin the game as one of those awakened, joining up with the nascent army/security service, BLADE, to help protect the survivors, explore Mira and ensure the city of New LA continues to thrive.

Mira is very much the star of the show. This isn’t some half-assed sci-fi world with a few pink trees and craters, but a rich, strange and beautiful alien planet with an unearthly geography all its own. With its weird rock formations and bizarre exotic vegetation, it sits halfway between Pandora, the setting of James Cameron’s Avatar, and the kind of world glimpsed in overblown 1970s progressive rock album covers. 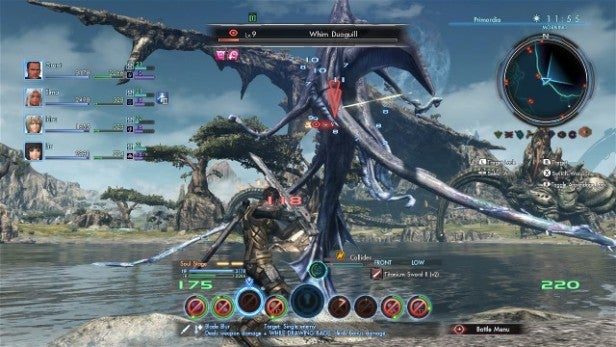 Make no mistake: on almost all levels this is graphically the Wii U’s finest hour, as Mira dishes out knockout landscapes after knockout landscape. The further you travel, the more you’ll appreciate the variety, as plains give way to mountains, deserts, swamps and jungles, where arcs of rock lead the eye to vast waterfalls, and where strange wonders can be found in the caverns beneath the surface. And with the whole thing densely populated by gigantic stomping, racing, pouncing, floating, biting beasties, Mira doesn’t take long to become one of gaming’s most spectacular settings.

If you want to see vast, screen-filling creatures and battle them, then Xenoblade Chronicles X is very much your game. While we still get a few sci-fi action game clichés, with giant arachnids and giant crocodile-like critters, the team at Monolith Soft can’t be accused of a shortage of imagination. Here we get huge, speedy, lizard-like predators with armoured skulls, elephantine hulks with lashing and flattening attacks, weird floating manta ray critters with electrocuting whips and a good two dozen other giant varmints, some peaceful, some highly aggressive. These make up the meat and potatoes enemy of the game, threatening New LA and its explorers, and you’ll spend an awful lot of time taking them down. 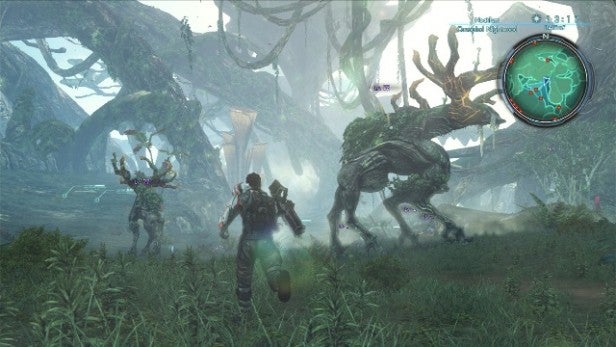 Luckily, you’re not tackling them alone. You’re always part of a party with up to four members, controlling your protagonist in real-time while the CPU controls the other one-to-three. Combat is a slightly odd mixture of action, MMORPG and JRPG, where you have total control over movement but only partial control over targeting and shooting. Instead, the focus is on timing your character’s buffs and special attacks, selecting them from a bar at the bottom of the screen and activating them in the most efficient way possible.

Even here, Xenoblade Chronicles X is distinctive, as the most effective approach mixed ranged weapon fire (to weaken the monsters) with melee combat (to deliver heavy blows while they’re vulnerable). On top of this, the game has a system of shouts, triggered by pressing the B key in response to an onscreen prompt. These buff your party in a way that alters the flow of battle, encouraging everyone to stand back and blast or race in and batter your hulking quarry. At first, it’s a hideously confusing mess of systems, but with time and patience, it gels into something more workable and satisfying.

Early on, exploration is key as you focus on planting navigation beacons, eliminating the more hostile wildlife and gathering materials. You’ll level up, earn new abilities and forge relationships with different prospective party members. You can purchase new gear from a store, but also sign up to work with different arms manufacturers and effectively road test their product range, which helps them accelerate the development of new upgrades. There are automated resource gathering systems in place, while you can vary the nature of your tasks and the missions available to you by signing up for different BLADE divisions.

In the first six hours, it’s a little overwhelming. Here is a game with at least two class systems in place, numerous other systems with their own sub-systems, plus a progression system that’s, on the one hand, utterly bewildering and, on the other, barely explained. 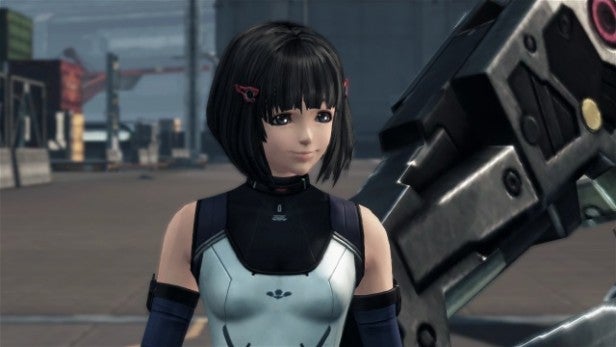 This all sits on top of a mission structure that puts all the emphasis on grinding and a narrative that goes big on dull, heavy-handed cut-scenes played through by some of the most featureless, poorly animated marionettes seen in the last few years – the characters make Fallout 4’s cast look like they could audition for the next Uncharted or Beyond: Two Souls. Sure, you can say it’s the anime style, but does it really have to look this inept?

And while the plot does pick up once it’s revealed that the local fauna isn’t the only threat on Mira, there’s still something amateurish about parts of the mission design and gameplay. While the game does a fantastic job of creating believable ecosystems, more humanoid enemies are so dumb and unresponsive that it feels like they’ve been plucked from an MMORPG from the early World of Warcraft era. 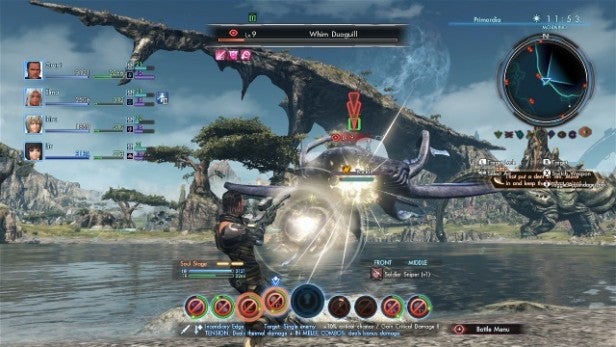 There is something very ‘jam tomorrow’ about Xenoblades’ whole approach. You find out early on that you’ll get to run around in the Skells – giant mech suits that are ideal for battling the bigger creatures – but the game holds the pleasure off for so long that I suspect many players won’t even make it that far. Story missions, meanwhile, are gated off behind bizarre restrictions. It’s as if Monolith Soft grew worried players wouldn’t bother spending hours exploring its world and decided to make bloody well sure they had to before the game moved on.

That’s frustrating, because when the jam arrives it’s really tasty. About seven hours in I would have happily put the controller down on Xenoblade Chronicles X and never picked it up again. A few hours later, I was hooked. With better weapons and kit and a bit more experience, the combat begins to flow. You still find yourself wandering into fights you’re not equipped to handle, but you learn to watch the level markers above the monsters and recognize situations where you won’t come out on top. Systems that seemed inexplicable and willfully obscure start making sense; you can start choosing and tailoring your CPY-controlled allies to make a more effective fighting team, and even play special missions that develop the bonds between then, bringing new affinity-based abilities into play. Most of all, the more you just chill out and get into the game’s open, relaxed, exploration-friendly vibe, the more enjoyable the whole shebang becomes. 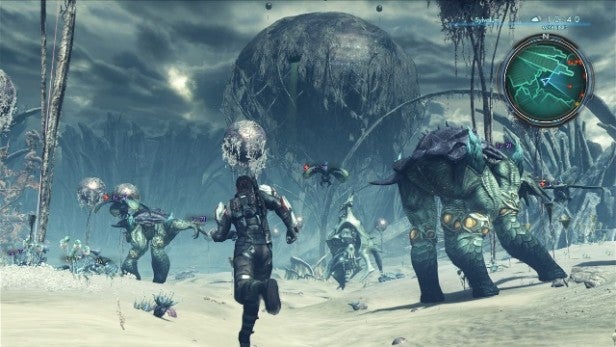 What’s more, the MMORPG elements aren’t just skin deep. After the third story mission you’re encouraged to sign up for a squad – a group of players with common objectives. From there you can take part in squad-based missions, focusing on specific monsters and play multi-player missions. What’s more, you can register an avatar of your character to go out and fight in other players’ solo games (for a limited period). You get rewards for your avatar’s effort, and you can always borrow another player’s when you need one, too. Right now, pre-launch with a low player count, this stuff isn’t really 100% functional, but it’s easy to see the potential, and how it could transform the experience long-term.

Again, that sounds like jam tomorrow, and I can’t emphasis enough that Xenoblade Chronicles X is not the most accessible or instantly likeable game. Yet I suspect that, if only for a niche group of players, it’s going to be something of a classic. This is the kind of big, sprawling, epic game you might have thought you’d never see on the Wii U, and where some will find a frustrating, confusing mess, others will find their new obsession.

Verdict
A strange blend of sci-fi, action, MMO, Monster Hunter and JRPG, set on a dazzling, weirdly beautiful alien world. It’s both a cliché and an understatement to say that Xenoblade Chronicles X won’t be for everyone, and some elements of the game are strangely clumsy. Yet there’s something about this game’s relaxed, exploratory vibe that’s oddly compulsive and – as Monster Hunter’s proved – battling titanic beasties never gets old.