XCOM: Chimera Squad does enough to keep fans of franchise entertained while they wait for XCOM 3, but niggling bugs and unforgiving time management elements will put off newbies to the genre.

The last few weeks have been great for strategy fans, with big names like Gears Tactics and now XCOM: Chimera Squad offering vastly different takes on the formula.

For those out of the know, XCOM: Chimera Squad is the latest turn-based strategy experience from Firaxis Games. It’s being pitched as a sequel to XCOM 2: War of the Chosen, and at first glance looks relatively similar, offering turn-based, tactical gameplay mixed with base building strategy elements.

But, despite its namesake, Chimera Squad takes a few significant detours away from the franchise’s traditional formula that makes it feel like the hybrid of Rainbow Six Siege and XCOM 2: War of the Chosen.

The narrative picks up directly after the events of War of the Chosen. But unlike other entries into the series, you don’t control XCOM itself. Instead, you take command of Chimera Squad – a new unit built up of specialists from XCOM, old resistance cells and the now unbrainwashed Advent soldiers and invading aliens from the previous games.

In layman’s terms, this means rather than commanding a global resistance force, in Chimera Squad you control a specialist SWAT team that’s tasked to protect the new peace between humans, aliens and hybrids in the fictional City 31. 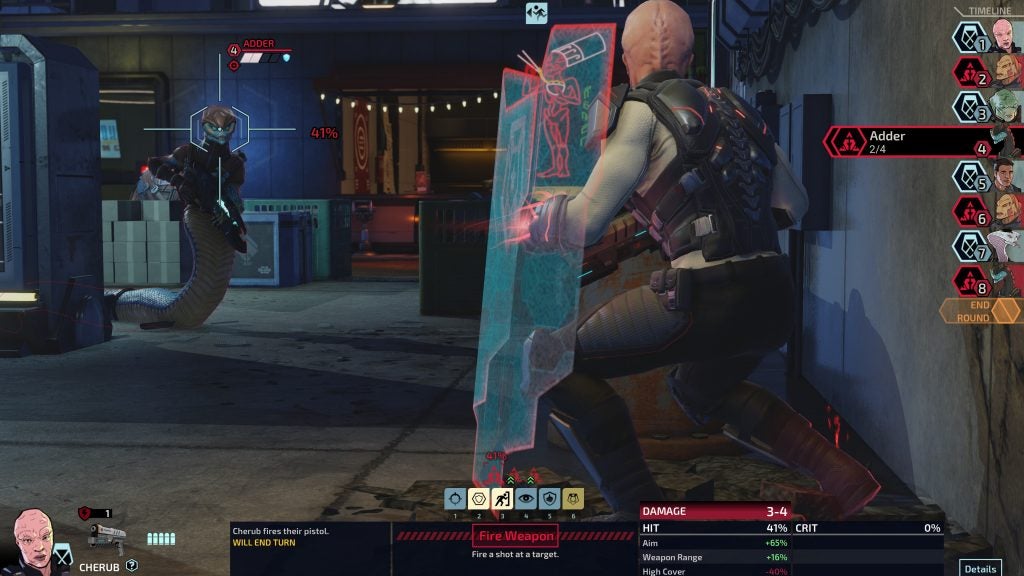 The changes don’t stop there. Jumping into the opening tutorial you’ll immediately see that, though it comes from the same lineage, Chimera Squad is a very different beast compared to XCOM. For starters, missions are now much, much shorter and divided into self-contained sections, each of which is divided by a new “breach” mechanic.

Breaches are a new way for your agents to start encounters with enemy units. It lets you place squad members next to specific entry points, each of which comes with a set of advantages or disadvantages. For example, going into a warehouse through the side window may give you a better vantage point, but if it’s being heavily watched there’s a bigger risk the enemy will see you and return fire when you enter it than if you go through the back door.

You can assign squad members to multiple breach points. Later in the game, you can also invest in custom tools, like breach charges, key cards and specialist armour that let you take advantage of otherwise inaccessible entry points. These include things like ventilation shafts or locked doors.

Once set up, you then start the encounter and see your agents rush the area in slow motion. As an added perk, each agent gets a free action when going in. At the start, this is limited to taking a potshot at an enemy or going to cover. But later on, as your agents level up, you get a chance to use more specific skills during the breach. These include things like using a shielded character to set up a wall, protecting the agents behind him or using a psychic alien’s telekinesis to pull a hunkered down enemy out of cover.

The breach element is one of the more positive tweaks to the XCOM formula, as it adds a further layer of tension and strategy to each phase of a mission, forcing you to go into each encounter with limited intel.

This is largely down to one of the game’s other big changes: you control hero characters. Unlike past XCOM games, every agent you command has a name, back story and specific custom class, complete with unique skills and equipment. Godmother, for example, is a badass shotgun-wielding shock trooper, with aggressive attack focused skills. Verge meanwhile is a psychic alien with disruptive mind-bending skills that can stun, or even control, enemy soldiers. 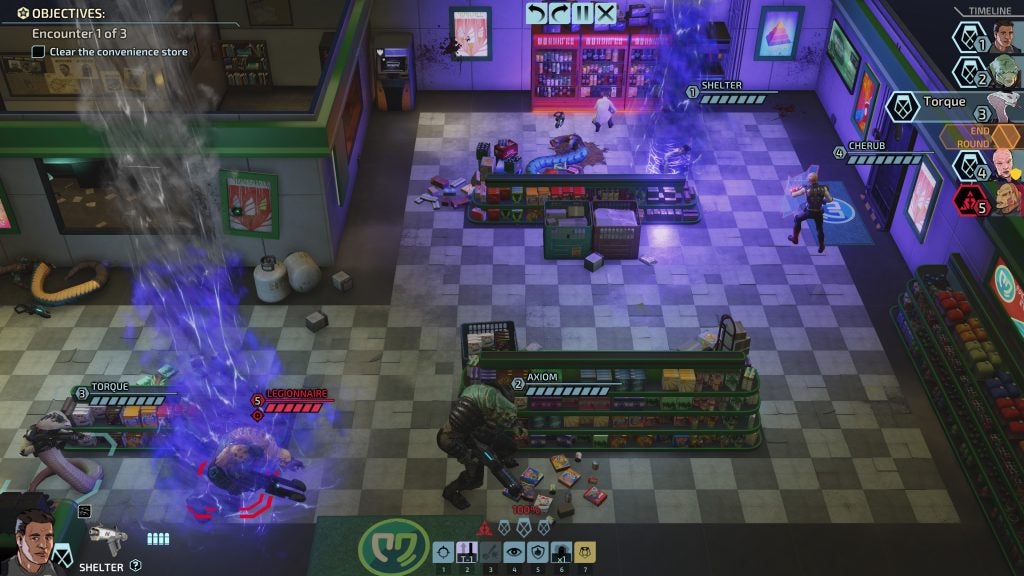 Putting a hero in the wrong place in a breach chain can have disastrous consequences that change the entire flow of an encounter. I learned this early on when I sent my hero medic in at the front, only to have her get torn apart by enemy fire during the breach, forcing me to restart the encounter. Learning from my mistake, I swapped her for Cherub, an energy shield-wielding ex-Advent hybrid, and was able to storm the entry point with zero initial damage.

However, from there, the changes get a little more marmite and will either delight or annoy existing XCOM fans. Encounters are much shorter than traditional XCOM levels. No matter how far you go in the story, missions take at most 15-20 minutes and see you move from one small sandbox map to another small sandbox map.

Mission objectives, which include clear the area, hostage rescue and snatch and grab objectives add some variety, but there’s no getting around the fact, after a while, they start to get a little samey.

A focus on heroes also makes the game fairly forgiving compared to regular XCOM. Chimera Squad’s narrative means any squad member’s death will end the game, forcing you to restart the mission. There’s no option to continue with a diminished squad.

The only downside is that if they’re downed, they’ll leave the mission with a scar. This is a negative effect that will lower their stats until you treat them at Chimera Squad’s home base. The fact treating them takes them out of action for several missions does offer some incentive to hate taking damage, but it still feels oddly easy by XCOM’s normally brutal standards. 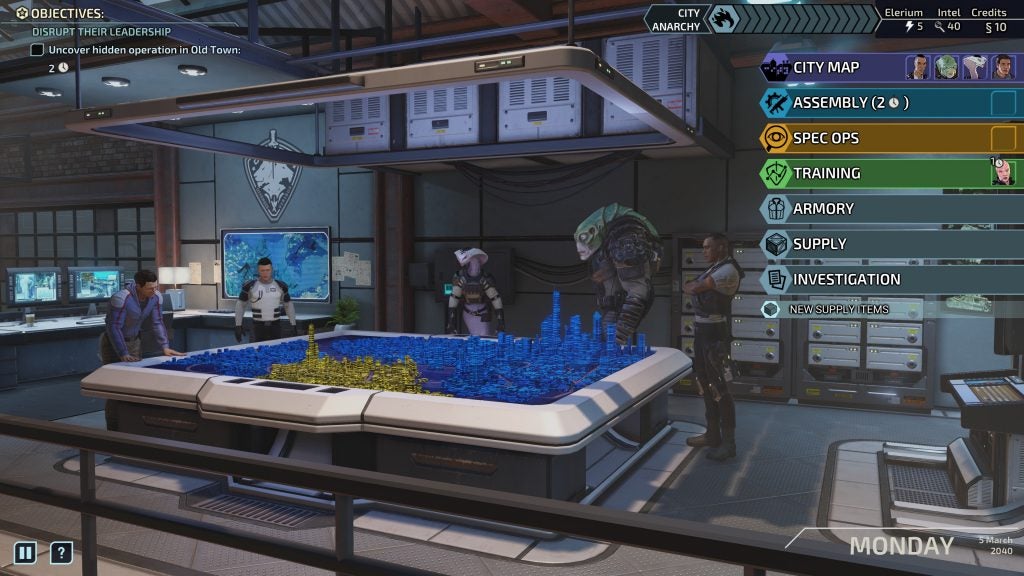 My only serious complaint about missions is that Chimera Squad’s hit chance percentages are still janky at best. All too often you’ll have an enemy in plain sight with a 90 percent hit chance, that’s somehow got the luck of the Irish and will dodge all four of your squad’s attacks, only to then down your hunkered down tank in one hit with a bizarrely luck critical hit. This can lead to some very frustrating experiences where it feels like bugs, not the enemy soldiers, are beating you.

Unlike XCOM, Chimera Squad’s investigation takes place across City 31’s nine districts, not the entire world. There’s also no exploration. The only familiar feature is that, like regular XCOM, your job is to make sure panic doesn’t reach a certain level in each zone. If the anarchy bar on the city map maxes out, it’s game over for your campaign.

You lower anarchy and panic in the city by completing missions, or sending secondary “tactical squads” to them. Tactical squads work kind of like XCOM 2 satellites. They are auto-panic controlling units that can be assigned to specific areas and used to lower that region’s anarchy level and accrue resources each in-game week.

The main crux of the campaign sees you work to take out three dangerous groups believed to be responsible for attacks on the city. This is done by gathering intel during various missions to uncover their leader/plans and stop them. 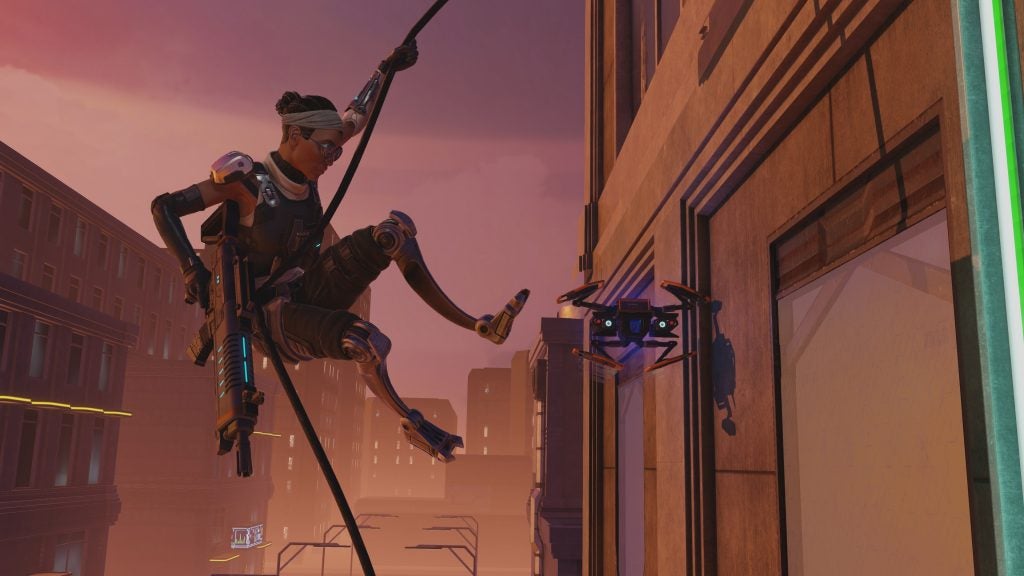 Unlike traditional XCOM, you can’t build or tweak the base’s facilities. But there’s enough depth and freedom to give things a significantly more strategic feel than most tactical shooters.

In the base, you get a basic store, training facility, barracks (changing room), workshop and spec ops centre. The barracks, store and workshop’s purposes are self-descriptive. They’re where you can check out your squad members’ status, promote them to unlock new skills and edit their load-outs pre-mission. The store lets you buy items, while the workshop acts as your R&D centre, letting you mount research projects to unlock better equipment and items for your troops.

Spec Ops are mini-missions you can send unassigned team members on. They take set amounts of time and reward you with elerium, intel, and dollars, the currencies used to buy or upgrade Chimera Squad.

The training facility and spec ops are a little different. The training room serves two purposes. The first lets “train” one of your squad members. This makes them unavailable for missions for a set amount of time but sees them return with improved base stats. The second lets you heal their scars. 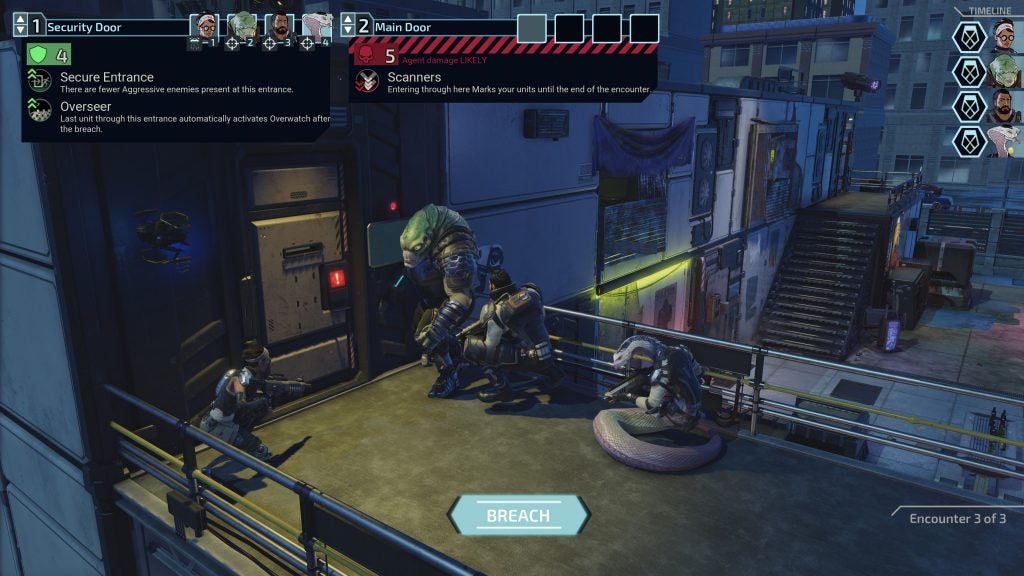 The mechanic’s interesting as, like all XCOM games, time is a key thing you don’t have. So leaving one of your favourite heroes out of action for multiple days running a spec op or training is a big ask. This is especially true as the locked-down skill trees mean that certain members of Chimera Squad work way better together than others, so losing one of your favourite characters will make certain missions way harder.

You can’t just recruit more soldiers. If you take too many squad members out of action and can’t get four onto your APC vehicle, then you won’t be able to mount missions. Poor planning can leave you in this situation for days at a time, causing a spike in the city’s anarchy level.

The fact new squad members are only recruitable at specific points in the story and force you to irreversibly pick between three different characters is another cause for tension. Pick one with unsuitable skills for your playstyle, and you’re going to struggle.

This mechanic is one of the only things to add replay value to the game, as you won’t be able to try every hero in one playthrough. Though given missions’ repetitive nature, I can’t see many people bothering to go through the entire campaign more than once or twice.

Outside of this, the game’s mission picking dynamic manages to retain the same weighty decision making element of the main XCOM series.

Because you’re racing against the clock, picking which missions to take feels significant: Quelling a panic zone at the expense of chasing down a lead on a faction leader may have short term benefit, but leave you open to a “dark encounter” down the line. These are the modifiers that appear if you leave investigations untouched for too long that make certain story missions way harder.

Should you buy XCOM: Chimera Squad?

XCOM fans will find a lot to like about Chimera Squad. The stripped-down story-driven gameplay manages to retain enough strategic focus to remain fun. The story is also engaging enough to keep you entertained for at least one playthrough.

Ongoing issues with its hit percentage counter and unforgiving time management mechanics may make it a bit too intimidating for people unfamiliar with the genre. Newbies will be better off checking out Gears Tactics, which is a much friendlier entry point.